Conclusions: There is a possible role of gene-environment interaction in the pathogenesis of pre-eclampsia. An interaction of increased levels of pesticides with GST polymorphisms (null type) causes low levels of GST enzyme levels (an anti-oxidant) resulting in increased oxidative stress causing pre-eclampsia.

Pre-eclampsia is a multi-system disorder characterized by hypertension (blood pressure of ≥ 140/ 90 mm Hg) and proteinuria (≥ 300 mg/day) [1, 2]. Hypertensive disorders complicate 5-10% of pregnancies [3]. Recent studies have investigated the role of genetic susceptibility and gene-environment interactions in pre-eclampsia [4]. However, despite the strong correlation between oxidative stress and pre-eclampsia, only a handful of genes have been investigated. A family of enzymes, Glutathione-S-Transferases, play a critical role in providing protection against electrophiles and products of oxidative stress [5]. Genetic polymorphisms in genes encoding GST have been defined [6, 7]. Association of hypertension in general with pesticides has been studied a lot but association with pre-eclampsia has recently received some attention.

However, despite being universal exposure of antenatal population to organochlorine pesticides, only some women are susceptible to adverse effects of pesticides as a result of certain gene polymorphisms (GSTM1 & T1) which lead to decreased excretion and thus accumulation of greater amounts of pesticides in their systems; thus manifesting adverse effects. This is how the gene environment interaction comes into play in pathogenesis of pre-eclampsia. The present study aimed at estimating and comparing the frequency of GSTM1 & T1 gene polymorphism, serum levels of Glutathione-S-Transferase enzyme and organochlorine pesticides levels  in cases (pre-eclampsia) and controls (normal pregnancy), and to evaluate the correlation; if any.

This was a hospital based case control study in which 66 pre-eclampsia cases (according to ACOG Criteria [8] Blood pressure of 140 mmHg systolic or higher or 90 mmHg diastolic or higher that occurs after 20 weeks of gestation on two occasions 6 hours apart in a woman with previously normal blood pressure & Proteinuria, defined as urinary excretion of 0.3 g protein or higher in 24 hour urinary specimen or ≥ 1+ dipstick) were recruited. For each case, a gestational age, parity and BMI matched control was recruited. Females with Age <18 years or >35 year, women with occupational exposure to pesticides, Chronic hypertension, thyroid disorders, chronic liver disease, heart disease, Pre-existing or gestational diabetes mellitus, Chronic renal disease, Thrombophilias –familial or acquired, Systemic lupus erythematosus, Hydramnios, pregnancies complicated by foetal abnormalities and women in active labor were excluded.

A questionnaire survey of the women was done to collect general demographical information in order to define the inclusion/exclusion criteria. Women confirmed their participation by signing a consent form and this study was approved by the Institutional Ethical Committee for Human Research. Five ml of maternal blood was drawn from each recruited subject. Out of 5 ml, 3 ml of blood was collected in an EDTA vial & 2 ml was collected in plain vial. Two ml blood in EDTA vial was used for DNA extraction for polymorphism study. Two ml of blood in plain vial was used to study the GST activity in serum and one ml of blood in EDTA vial was used for organochlorine pesticides residues analysis.

DNA extraction was done using blood sample, deionized water, centrifugation & extracted DNA was used for PCR analysis. A single assay using a multiplex PCR was performed for simultaneous gene amplification. 50 ng of DNA was amplified in a 50-µl multiplex reaction mixture containing 30pmol of each of the following GSTM1 primersin a medium consisting of 1.5 mM MgCl2, 200 µmol dNTPs, 5µl 10X PCR buffer (10X 500 mM KCl), 100 mM Tris-HCl, (pH 9.0) and 2 U TaqDNA polymerase. The PCR protocol included an initial melting temperature of 94°C for 5 minutes followed by 35 cycles of amplification (2 min at 94°C,1 min at 59°C, and extension for 1 min at 72°C). A final 10 min extension step at 72°C terminated the process. The final PCR products from the co- amplification of GSTM1(215 bp) and GSTT1(480 bp) were visualized on an Etidium Bromide- stained 2.0% agarose  gel to look for gene polymorphism present / absent.

The estimation of GST activity is based on principle that GST catalyzes the conjugation of L-glutathione to CDNB through the thiol group of the glutathione .The reaction product, GS-DNB Conjugate, absorbs at 340 nm. The rate of increase in the absorption is directly proportional to the GST activity in the sample. The linearity of the reaction was determined by plotting the absorbance values against time. The change in absorbance (DA340)/minute, in the linear range of the

plot, for the sample and for the blank was calculated by subtracting A340 (initial reading) from A340 (final reading) and dividing the result by reaction time (min.). Equation used:

dil =  the dilution factor of the original sample

OCP residue extraction was done using hexane and acetone (2:1) according to the method of Bush et al. Clean-up was done by the USEPA method using Florisil (Sigma) by column chromatography. Quantification of organochlorine residue levels was done by a Perkin Elmer Gas chromatography system equipped with 63Ni selective electron capture detector. Limits of detection were <0.05 pg perchloroethylene with nitrogen. Quantitative analysis of OCP residues in each sample was done by comparing the peak heights with those obtained from a chromatogram of a mixed organochlorines standard of known concentration. Ten samples of each maternal and cord blood in triplicate were spiked with a mixed standard of organochlorine pesticides. Furthermore, a quality check sample was always run with each set of samples for pesticides analysis.

Data was analyzed by SPSS Software (version 20.0), binary logistic regression was performed to compare genotypic variation. Pearson’s coefficient of correlation was used to test correlation between levels of GST and pesticides. To correlate if high levels of organochlorine pesticides are associated with gene polymorphism and rise in blood pressure (SBP/DBP) in pre-eclampsia, multiple linear regression analysis was employed. P-value of <0.05 was considered significant.

Table 2: Correlation of genotypic distribution of GST with severity of pre-eclampsia. 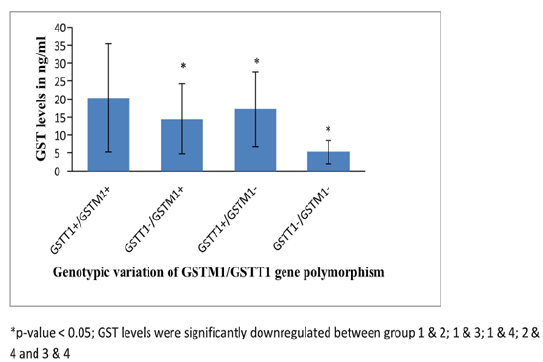 *p value≤0.05 has been considered as significant.

Pre-eclampsia is a pregnancy related disease with an unpredictable course that can have serious consequences for the mother and the fetus. It is very essential to analyze the etiological factors and carry out further research in targeted interventions to prevent pre-eclampsia. In this prospective case-control study we made an effort to find an association among genetic polymorphism in GST gene (genetic factors), GST enzyme activity and organochlorine pesticides (environmental insult) in pre-eclampsia and the possible mechanisms underlying this association. The incidence of pre-eclampsia in the present study was 8.73%, which is consistent with those reported from most of the studies in developing countries. One of the most important systems involved in metabolism and detoxification of ROS, xenobiotics and carcinogens is that of Glutathione-S-Transferase (GST) [5]. Null genotypes of GSTT1 and GSTM1 have been linked with an increased risk of several multifactorial traits including cancers and cardiovascular diseases [9]. In present study, the frequency of GSTM1/GSTT1 genotypic variation was studied and it was found that GSTM1-/T1- (both null deletion) genotype was significantly higher in subjects with pre-eclampsia as compared to controls. This is in concordance with a previous study by Sahar S et al. [10] where GSTM1- / GSTT1- (both null type) genotype was a potential genetic factor to predict development of essential hypertension and permit early therapeutic interventions. Human beings are constantly being exposed to variety of environmental contaminants like organochlorine pesticides. The problem of pesticide residue is very high in India due to poor safety measures during use and implementation despite low average consumption of pesticide than many other developed countries. The result in our study has also shown higher levels of various pesticides residues in blood samples of women with pre-eclampsia. The findings of the present study are in agreement with previous studies, where higher levels of OCPs in pregnant women may cause adverse reproductive outcomes as these pesticides can act as xenoestrogens as well as create oxidative stress [11-13]. Women are exposed to a variety of reproductive toxins, but not all who are exposed have adverse reproductive outcomes. It is speculated that an individual’s reproductive risk associated with these toxins may be modified by genetic variation in metabolic detoxification activity. Mustafa et al. [14] in 2013 reported that when GSTM1 genotype was absent (null), increasing levels of β-HCH increased the risk of preterm delivery significantly. Ours study is probably the first human study where attempts have been made to show that increase in pesticide levels in body result in pre-eclampsia in the presence of double null GST genotype due to decrease in antioxidant levels. Pre-eclampsia is a significant health problem both in developed and in developing world despite enhanced standard of antenatal care. Newer etiologies like environmental factors (pesticides) and specially gene-environment interactions need to be established to set appropriate preventive strategies in order to bring incidence and mortality under control. The results of our study reconfirmed that there is a possible role of gene-environment interaction in the pathogenesis of pre-eclampsia. An interaction of increased levels of pesticides with GST polymorphisms (null type) caused low levels of GST enzyme levels (an anti-oxidant) resulting in increased oxidative stress, thus causing pre-eclampsia. Thus we can conclude from the present study that continuous indirect exposure of pesticides in general population are detrimental to health and may result in adverse reproductive outcome like pre-eclampsia. Our study has proven the hypothesis that environmental factors (pesticides) interact at genetic level (gene polymorphism) to ultimately cause pre-eclampsia by altering the oxidative stress pathway. We recommend further such studies on a larger population to prove gene environment interactions causing pre-eclampsia. We notice that even after being banned by various organizations, use of these pesticides is still prevalent as shown by increased blood levels. Therefore, use of such harmful chemicals should be banned with immediate effect. Food safety and standards authority of India should implement stringent regulations to keep a check on the levels of pesticides found in food samples. Pregnant population in India should be encouraged to consume more antioxidants (natural & vitamins) to combat the oxidative damage caused by environmental exposure.

S.K. – Patient recruitment and did the study

This study was funded by an intra-mural grant from University College of Medical Sciences, Delhi, India.