A Rare Case of Mixed Large and Small Cell Neuroendocrine Carcinoma: A Systematic Review of the Literature

Case Presentation: A 58 year-old man presented with epigastric pain, nausea and melena. Several exams showed an antro-pyloric poorly differentiated grade III gastric small cell carcinoma classified as cT4 cN+ cM0. The tumour board recommended neoadjuvant treatment with six cycles of cisplatin-etoposide, with the last two cycles associated with radiotherapy. Re-staging showed a good partial response and no spread of the disease, therefore we completed treatment with a radical gastrectomy with D2 lymph node dissection. The surgery was performed in August 2019 and the patient was discharged after ten days. Pathology report showed a mix large and small cells neuroendocrine carcinoma . Due to the neoadjuvant treatment, the small cell component seen in a preoperative biopsy had largely disappeared and the case was diagnosed as a mixed large and small cell neuroendocrine carcinoma ypT4a N3a (9/28) G3 L1 V1 Pn1 R0.

Discussion: Clinical manifestations of gastric small cell carcinoma (GSCC) are similar to classic gastric adenocarcinomas. However, gastric small cell carcinoma can secrete ectopic hormones like parathyroid hormone, antidiuretic hormone, calcitonin or serotonin. Upper gastrointestinal endoscopy is the method of choice for the diagnosis, supplemented with an immunohistochemical examination with a positive reaction to neuro-specific enolase (NSE), chromographin A, synaptophysin, CD56 and Grimelius. The treatment strategy for GSCC is unclear. There is no difference in the pathological features, response to chemotherapy, incidence of progression and survival between the different anatomical locations of these tumours. A review of the literature limited to GSCC recommended multi-modal approach combining surgery, radiotherapy and platinum-based adjuvant chemotherapy. Ten months after surgery, the patient is still disease free.

Conclusion: GSCC is a rare and aggressive entity with low survival rate. The rarity of this entity makes treatment challenging. Unlike small cell lung cancer, surgery remains part of the multi-modality treatment of GSCC.

Neuroendocrine tumours (NETS) are a heterogeneous group of malignancies. The neuroendocrine system includes endocrine glands such as the pituitary and the parathyroids glands, as well as endocrine islet tissue embedded within glandular tissue and scattered cells in the exocrine parenchyma such as endocrine cells of the digestive and respiratory tract [1]. Pure small cell carcinomas of the gastrointestinal tract are poorly differentiated, high-grade gastro-enteropancreatic neuroendocrine carcinomas [2], accounting for less than 0.1% of all gastric cancers and 15% of gastric neuroendocrine tumours [3]. Gastric small cell carcinoma (GSCC) is an aggressive tumour with a strong ability for local and distant spread [4]. The prognosis of GSCC is poor with or without treatment [5], with a median overall survival time of 18.5 months [6]. The aim of this paper is to present a rare case of GSCC and his management through a multidisciplinary approach with a systemic review of literature.

A 58-year-old man presented with epigastric pain a few weeks in duration, nausea and an episode of melena. Abdominal computed tomography showed a large gastric mass (Figure 1). Workout was completed with a PET/CT scan, confirming the presence of a large hypermetabolic antro-pyloric gastric lesion with necrotic centre and a localised peritoneal infiltration. Hypermetabolic infiltration of the perigastric fat and hypermetabolic adenopathy confirmed the presence of loco-regional metastases. Distant metastases were not present. Abdominal magnetic resonance imaging demonstrated the presence of an antro-pyloric tumour with adenopathy and a classification of cT4 cN+ cM0. Gastroscopy showed an 8 cm ulcerated antro-corporeal mass (Figure 2). The biopsy came back positive for poorly differentiated grade III GSCC. The MDT review recommended six cycles of cisplatin-etoposide with the last two cycles associated with radiotherapy. The first cycle of chemotherapy was complicated with febrile neutropenia and acute respiratory distress syndrome. Subsequent neoadjuvant treatments were done without complications. Abdominal PET-CT repeated after 6 month and at the end of neoadjuvant treatment (Figure 3) showed partial response , the disappearance of adenopathy and no distant metastsasis. Gastroscopy after neoadjuvant treatment revealed a stable gastric lesion with no macroscopic regression.

In view of this response, we performed total gastrectomy with D2 lymph node dissection in August 2019 without immediate complications. The patient was discharged after ten days. The pathology specimen contained a mix large and small cells neuroendocrine carcinoma. The small cells showed a good response to neoadjuvant treatment. The final classification of the pathological analysis was a mixed large and small cell neuroendocrine carcinoma, ypT4a N3a (9/28) G3 L1 V1 Pn1 R0 (Figure 4). Ten months after the surgery, the patient is free of disease. 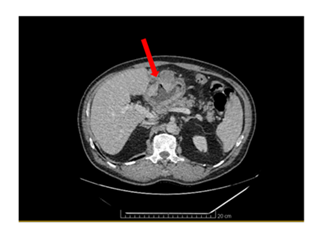 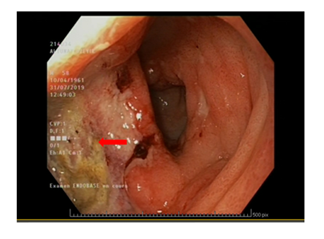 Figure 3: Pet-CT scan showing the gastric small cell carcinoma before and after the neoadjuvant treatment with a partial regression. 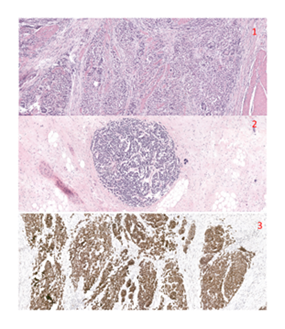 Small cell carcinoma is most frequently found in the lung. Extra-pulmonary small cell carcinoma can be present in the urinary bladder, prostate, oesophagus, stomach, colon, rectum, gallbladder, larynx, salivary glands, cervix and skin. These extra-pulmonary locations account for 4% of small cell carcinoma [7]. GSCC is a rare and poorly differentiated neuroendocrine tumour, accounting for less than 0.1% of all gastric cancers and 15% of gastric neuroendocrine tumours [3]. Clinical manifestations of GSCC are similar to gastric adenocarcinomas or other histologic types of gastric tumours, i.e. epigastric pain, reflux, ulceration and bleeding. GSCC, can secrete ectopic hormones including parathyroid hormone (PTH), antidiuretic hormone (ADH), calcitonin or serotonin, leading to systemic symptoms [7-8]. The preoperative diagnosis of GSCC is the same as for other histologic types [9]. Only 40% of patients with GSCC are diagnosed at a localised stage. GSCC prognosis is poor and median survival time is 18.5 months with five-year survival rate of 15-20.1% [6, 10, 11]. Only 40% of patients with GSCC are diagnosed preoperatively[12]. Upper gastrointestinal endoscopy is the method of choice for diagnosis but remain technically challenging. The difficulty of obtaining an endoscopic diagnosis is due to the proliferation of tumour cells under the mucosal layer, which makes it difficult to obtain a biopsy specimen [12]. EUS-guided bite-on-bite biopsies could obtain adequate samples, and re-examination using the EUS-guided bite-on-bite technique for deep biopsies of submucosal tissues can lead to the correct diagnosis [13].

The diagnosis of GSCC is helped by immunohistochemical examination, with a positive reaction to neuro-specific enolase (NSE), chromographin A, synaptophysin, CD56 and Grimelius [14]. Immunohistochemical analysis showed that our sample was positive for CD56, synaptophysin and keratin AE1-AE3. However, it was negative for chromographin A. Two types of GSCC exist: the pure type tumour and the composite type. The pure type contains the histologic features of GSCC only, while the composite-type is a combination of GSCC with other histologic features such as adenocarcinoma or squamous cell carcinoma [15]. Our sample was a pure type.

Most GSCC have micro-metastases at the time of diagnosis [10]. The most common site for metastatic involvement at presentation is the liver (53%). Other sites include the peritoneum (28%), soft tissues (25%), lungs (22%) and bones (17%). In indeed, in a retrospective study performed by Brenner et al. 90% of patients showed metastatic progression in which 28% had distant metastases, 26% showed local progression and 23% were mixed. Overall, 78% of patients had disease classified as TNM stage III or IV and 48% had extensive disease [16].

The optimal therapy for GSCC is not clear due to the rarity of the tumour and the lack of randomised controlled trials, ; only 650 cases are reported in the literature [10]. However, the limited data available describe different modalities including surgical resection, systemic chemotherapy and local radiotherapy, alone or in combination with other treatment [11, 17]. Surgical resection with lymph node dissection remains the main curative treatment for localised disease [6, 8]. The median survival for patients with or without surgery is 46.45 months and 7.65 months, respectively [6]. Systemic chemotherapy is part of treatment because of the high risk of metastasis and the high recurrence rate [5]. Adjuvant chemotherapy significantly improves survival in patients at a limited stage, with a median survival time of 48.5 months observed. On the contrary, a median survival of 19 months was observed without adjuvant chemotherapy [4]. Neoadjuvant chemotherapy has been shown to be effective in patients with advanced GSCC [18], and in patients with localised disease, neoadjuvant therapy with chemotherapy or radiochemotherapy is an efficient option [19]. Adjuvant or neoadjuvant chemotherapy is based on the purpose to avoid metastatic proliferation [19]. The management of systemic GSCC disease with chemotherapy is based on treatment for small cell lung carcinoma, with the use of platinum-based regimens in combination with etoposide [20]. Cisplatin plus irinotecan is an alternative first-line treatment. There is no standard regimen for second-line therapy [21].

Several studies have shown that radiotherapy combined with chemotherapy could improve the curative effects [5]. Radiotherapy provides loco-regional control and long-term survival in isolated cases [8, 22]. However, the data on radiotherapy are currently limited. Wu et al. reported only two cases in a series of 205 patients [6]. Total gastrectomy with lymph node dissection with radiation therapy may provide locoregional control and subsequent long-term survival in isolated cases [22]. In our case, after a multidisciplinary discussion, we opted for neoadjuvant chemo radiotherapy using the same model as small cells lung carcinoma, followed by surgical resection with D2 lymph node dissection. As the treatment strategy is still unclear in GSCC, we think it should be discussed in a multidisciplinary meeting.

GSCC is a rare and aggressive entity. The survival rate and prognosis are very poor. Pre-operative diagnosis is often missed due to submucosal proliferation. The lack of randomised studies makes treatment difficult. For localised disease, a combination of surgery, radiotherapy and systemic chemotherapy is used. Systemic chemotherapy without surgery is indicated for advanced metastatic disease. This multimodal approach is the main treatment strategy and should be discussed in a multidisciplinary tumour board.