Aflatoxins were reportedly detected in the kidney of 58% of deceased children caused by kwashiorkor at Obafemi Awolowo University Teaching Hospital, Ile-Ife. The incidence of kwashiorkor in West Africa has since been associated with aflatoxin contamination of human diets. Although, more researches need to be conducted to proper ascertain the level of menace caused by Aflatoxin ingestion in humans, the frequency of occurrence on stored cowpea seeds in Nigeria was the aim of this research. The procedure described by Association of Official Analytical Chemists AOAC [1] was used in the detection and quantification of Aflatoxins present in stored cowpea seeds in Ibadan, Nigeria. Aflatoxins B1, B2, G1 and G2 were detected in all cowpea samples analyzed. Samples collected from Oja-Oba market were found to contain the highest amount Aflatoxins i.e. B1 (1.5 × 10-2 µg/g), B2 (0.80 × 10-2 µg/g), G1 (0.60 × 10-2 µg/g), and G2 (1.0 × 10-2 µg/g) compared to those found in other market locations, the control setup and WHO [2] standards (P ≤ 0.05). The result of this study calls for public health concern due to the high level of Aflatoxins found in cowpea seeds from local markets in Ibadan, Oyo State, Nigeria. Utmost care should be taken to minimize or totally eliminate postharvest pathogens that produce mycotoxins in stored grains and pulses.

Cowpea is an essential crop with multipurpose usage among the locals of Nigeria, which made the country famous (1st) in both production and consumption (Adegbite and Amusa, [3]). The seeds and leaves play pertinent roles in Ethno-medicine, they are used in the treatment of various ailments such as swellings and infections, tooth aches, insect stings (Brink and Belay, [4]) and common cold (Siddhuraju and Becker, [5]). The roots are also potent cure for chest pain, epilepsy, dysmenorrheal and constipation (Brink and Belay, [4]). However, most seeds (cowpea seeds inclusive) are highly susceptible to microbial contamination under poor storage conditions (Frisvad et al., 2006; Etaware and Etaware, [6-8]). Fungi and insects play significant roles in the reduction of seed quality during storage (Richard et al., 2009; Etaware, 2019 [8, 9]). The Food and Agriculture Organization (FAO) estimated over 25% of the world’s cereals contaminated by mycotoxins (FAO [10]). Mycotoxins are secondary metabolites secreted by fungi, which can cause diseases or death in humans and other animals when ingested in large quantity (Bennett and Klich, 2003; Bandyopadhyay et al., [11, 12]).

Mycotoxin contamination of various foodstuff and animal feeds are a major problem in the tropics and subtropics, where climatic conditions and storage practices are favorable for fungal growth  (Quiroga et al., 2009; Shukla et al., 2009; Salari et al., [13-15]). Aflatoxins (Figure 1) are one of the most lethal and poisonous mycotoxins present in stored grains (Manafi and Khosravinia, [16]). They are produced by toxigenic strains of Aspergillus and other related moulds (Mazaheri, 2009; Da Costa et al., [17, 18]). Studies carried out by the International Agency for Research on Cancer (IARC) led to the classification of aflatoxins as human carcinogen (IARC [19]). Aflatoxins can interfere with vaccine-induced immunity (Farag, [20]),  cause immunosuppression, impaired growth, damaged liver, and death in livestock or man (John and Steve, [21]). The liver is the main target; therefore, the level of damage depends on the reaction with DNA, RNA, enzymes and proteins (John and Steve, [21]), as illustrated in (Figure 2). Agricultural products such as groundnut, maize and cowpea are major targets for Aspergillus species (Whitlow and Hagler, [22]). Aflatoxins are Thermostable (heat resistant) and are not completely eliminated by normal cooking procedure (Kishore et al., [23]).

The incidence of kwashiorkor in West Africa has been associated with aflatoxin contamination of human diets (Tiffany, [24] . Severe cases of aflatoxicosis were recorded in Kenya in 2002 (CAST [25]), 317 people were reported ill, while 125 people died  (CDC, 2004; Lewis et al., [26, 27]). In 1974, 100 out 0f 400 people died from eating contaminated maize- based cereals in India  Lawley, [28]. According to Reddey et al. [29], these deaths may have resulted from immune toxicity in which lymphocytes immune functions were suppressed or disturbed by these toxins. Aflatoxins were reportedly detected in the kidney of 58% of deceased children by kwashiorkor at Obafemi Awolowo University Teaching Hospital, Ile-Ife (Oyelami et al., [30]). In a similar report by Onyemelukwe et al. [31], aflatoxins were found in both the sera and the blood of children with kwashiorkor. These data indicate that higher aflatoxins were more frequently detected in sera and urine of patients with kwashiorkor, as compared to the healthy control within similar age groups (Onyemelukwe et al., [31]. Although, more researches need to be conducted to proper ascertain the level of menace caused by Aflatoxin ingestion in humans, placing a priority on the management of aflatoxigenic fungi and their frequency of occurrence on stored cowpea seeds in Nigeria is imminent in order to safeguard human lives. 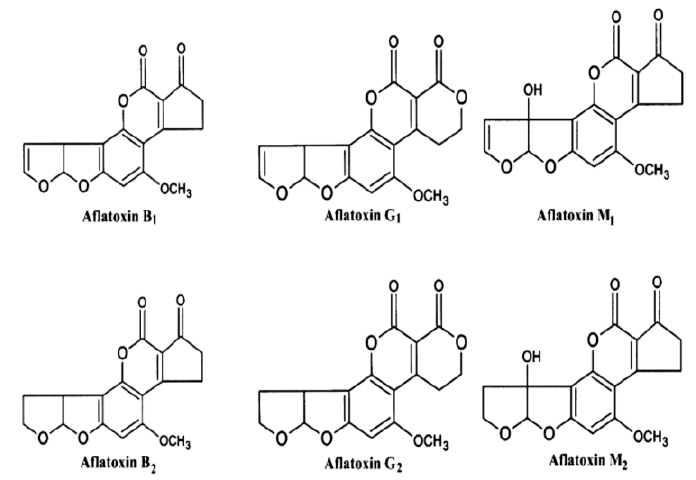 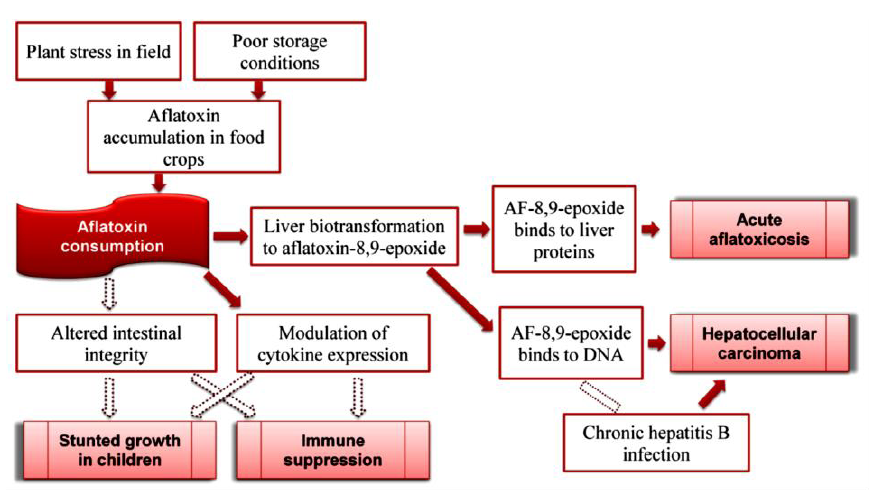 2.2 Detection of Aflatoxin in cowpea seeds

The cowpea samples were sorted and pulverized. A total of 1g of aqueous sample was pipetted into 100ml conical flask; 2.5ml of distilled water and 25ml of chloroform was added.

The flask was covered with a stopper and rocked in a shaker for 30 minutes after which the solution obtained was filtered using Whatman filter paper no.1.

About 10ml of each filtrate was collected and evaporated to dryness to a volume of 5ml in water bath.

Chloroform (1ml) was spotted and 0.2ml of the reconstituted extract was placed on a pre-coated 20 x 20cm Thin Layer Chromatography (TLC) plate along with Aflatoxin standards of known concentration.

The developed TLC plate was air dried at ambient temperature (28 ± 2ºc) and detection of aflatoxins was done under UV light at wavelength of 360nm.

A colour change from blue to yellow upon exposure to aqueous sulphuric acid (50:50 v/v) confirms the presence of Aflatoxin B1.

Aflatoxin B2 is a dihydro-derivative of Aflatoxin B1 which will produce a colour change from pale blue to deep yellowish upon exposure to aqueous sulphuric acid (50:50). This confirms the presence of Aflatoxin B2.

2.3 Quantification of Aflatoxin in cowpea seeds

TLC plates of O.5µm were used for the quantification. 0.8ml of initially extracted cowpea samples was applied to the plate as bands.

The preparative TLC plates were developed in an equilibrated tank for aflatoxin extraction.

When the solvent front has risen to about three- quarter of the total length of the plate, the plate was taken out of the tank and examine under UV light.

Once the area containing the toxin of interest is located after UV light examination, it is scrapped off, elute with chloroform and filtered using Whatman filter paper No.1.

The extract was evaporated to dryness in a water bath and reconstitute with 3ml chloroform.

The 3ml reconstituted solution and aflatoxin standard of 20µg/ml concentration was used to read Absorbance or Optical Density on an ultraviolet Spectrophotometer (Cecil Instrument CE505) at a wavelength of 360nm. Aflatoxin concentration in µg/g was calculated using the formula stated below:

The data obtained from the research was organized and analyzed using Costat 6.451 statistical software. Tables and graphs was prepared using excel worksheets and the homogeneity of means was determined by Duncan Multiple Range Test (DMRT). Data was represented as means and standard deviation.

The laboratory analysis conducted showed that Aflatoxins B1, B2, G1 and G2 were detected in all the cowpea samples collected from Sasa, Bodija and Oja-Oba markets in Ibadan, Oyo State, Nigeria (Table 1).

Means with the same alphabets down the column are not significantly different at P≤0.05 using Duncan Multiple Range Test (DMRT) for separation of statistically significant means. Data collected were represented as “Means ± SD” only. Note: WHO – World Health Organization

Aflatoxins were detected in all the cowpea samples from Ibadan, Oyo State, Nigeria. This could be due to improper handling during harvest and poor storage conditions. This was earlier reported by Esuruoso [34] who stated that Cowpea seeds exported from Western Nigeria in the early 1970s were reported to harbor moulds such as Aspergillus flavus, A. niger, Fusarium vertilliodes, F. solani, Penicillium digitatum and Rhizopus sp. etc. which are capable of mycotoxin production. This however points to a potential health hazards to human beings and animals. Aflatoxins B1, B2, G1, and G2 were detected in all the cowpea seeds used for this study. Aflatoxin contamination was higher than the tolerable limit stipulated by the Standard Organization of Nigeria (SON) and World Health Organization WHO) in majority of the cowpea samples collected. The highest Aflatoxin levels were found in cowpea samples from Oja-Oba market, while the lowest was found in Sasa market, which was within the tolerable limit (in some cases). The levels of aflatoxin contamination in cowpea seeds in the present study may be attributed to several factors among which are favorable environmental conditions and poor storage facilities among other factors. The presence of these aflatoxins in cowpea seeds should be monitored intermittently to avoid serious health hazards or even death to humans and other consumers of cowpea seeds and other cowpea products. A similar trend of Aflatoxin infiltration of stored cowpea seeds had earlier been reported by Seenappa [35] who investigated Aspergillus species infection and aflatoxin production in some cowpea lines in Tanzania. However, Houssou et al., [36] detected only Aflatoxin B1 in samples of cowpea seeds collected after three (3) months of storage in the republic of Benin, West Africa.

The result of this study raised a major public health concern due to the high level of Aflatoxins found in stored cowpea seeds collected from local markets in Ibadan, Oyo State, Nigeria. Utmost care should be taken to minimize or totally eliminate postharvest pathogens that produce mycotoxins in stored grains and pulses. Proper handling and processing of cowpea and cowpea products should be encouraged. Farmers and marketers should be trained on appropriate techniques for harvesting, handling and storage. To avoid domestic hazard from consumption of contaminated cowpea seeds, the National Agency for Food, Drug Administration and Control (NAFDAC) and other food agencies in Nigeria should conduct regular check-ups or quarantine services for cowpea seeds in circulation within and around markets in Nigeria.