Background: Alopecia areata is one of the most common autoimmune diseases. The pathobiology of this chronic, relapsing hair-loss disorder is not fully understood, and the available therapies are disappointing.

Objective: Currently considered a T-cell-mediated autoimmune disease, in which the gradual loss of protection provided by immune privilege of the normal hair follicle plays an important role. It is associated with an increased overall risk of other autoimmune disease in approximately 16% patients, being the most frequent autoimmune thyroid disease in 8 to 28 % patients, followed by vitiligo in 4 % patients, and lupus erythematosus in 0.6 % patients.

Results: We have found that an enhancer of the process of generation and distribution of energy that comes from melanin, with encouraging results.

Conclusions: This is first report indicates that the Melanin in its role as a generator of energy opens a new landscape in relation to the study and treatment of autoimmune disorders like alopecia areata.

Hair follicles in human body have extensive lifelong cyclic transformation [1]. The period of rapid growth and pigmentation is denominated anagen, and the short, apoptosis-driven phase of involution is catagen. Telogen is a period of relative quiescence before it re-enters anagen. Hair-follicle cycling and regeneration are stem-cell- dependent [2]. The major target of the inflammatory attack in alopecia areata is the anagen hair matrix [3]. The hair follicle has a relatively immune privilege that normally renders unlikely expressed auto-antigens [4]. The physiological function of immune privilege with respect to hair follicles is poorly understood.

Alopecia areata is manifested as the loss of hair in well-circumscribed patches of normal-appearing skin, most commonly on the scalp and beard region [5]. The onset is rapid, and involves the scalp or alopecia areata totalis, or even the whole body, alopecia areata universalis. Skin biopsy is usually diagnostic that show the characteristic “bee- swarm pattern” of dense perifollicular lymphocytic infiltrates around hair follicles.

The diagnosis of alopecia areata is usually easy, however, the treatment is tough. Current therapies gives often unsatisfactory results. At present, the two main approaches are intra-lesional injections of glucocorticoids and the induction of contact allergy [6]. Side effects include pain, localized skin atrophy, depigmentation and frequent relapses after treatment [7]. Glucocorticoid-induced folliculitis is a common adverse effect of high-potency topical glucocorticoids [8]. Topical minoxidil can be used in alopecia areata, in conjunction with oral glucocorticoids. Because dystrophy of the follicle is induced by inflammation, the hair shaft cannot be firmly anchored to the hair canal and is rapidly shed. The main therapeutic challenge is to reduce established inflammatory infiltrates, and prevent recurrence and spread to unaffected follicles. Current available therapies do not meet this challenge.

A 25-year old female patient attended the current inquiry with compatible findings for alopecia areata which evolved in 3 years. There was no history of any other autoimmune disease, and the patient had received several treatments for alopecia areata with poor results (Figure 1). Figure 2 represents images per year of treatment. 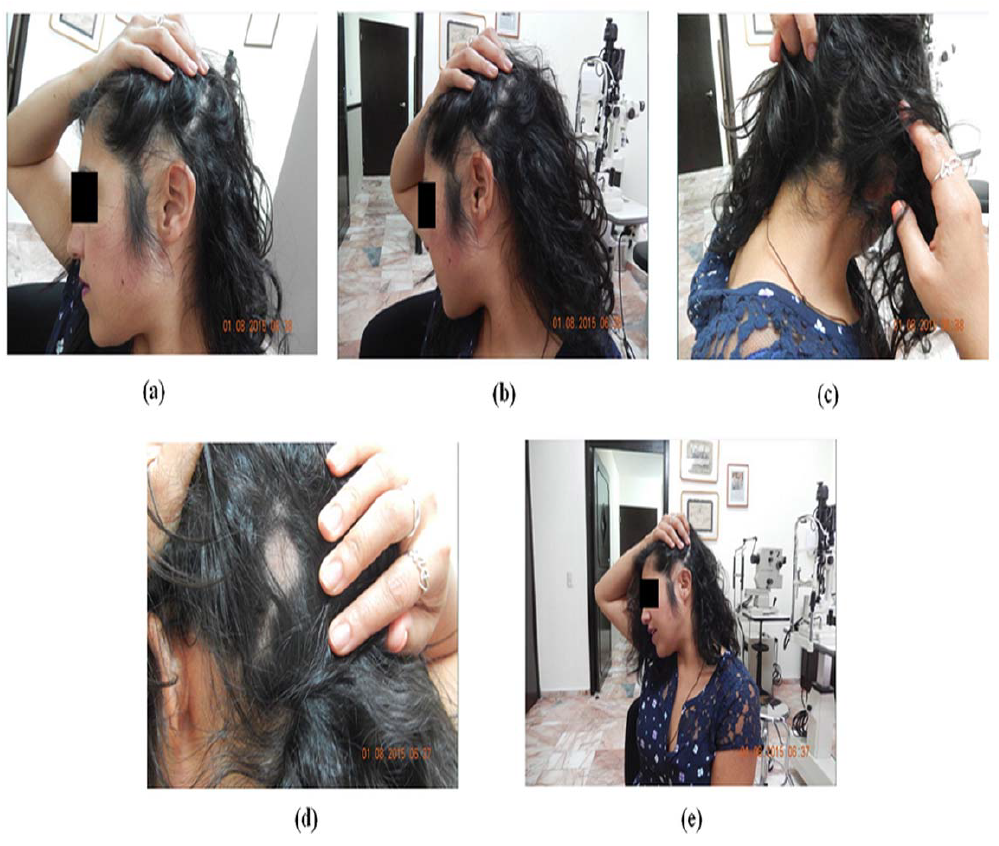 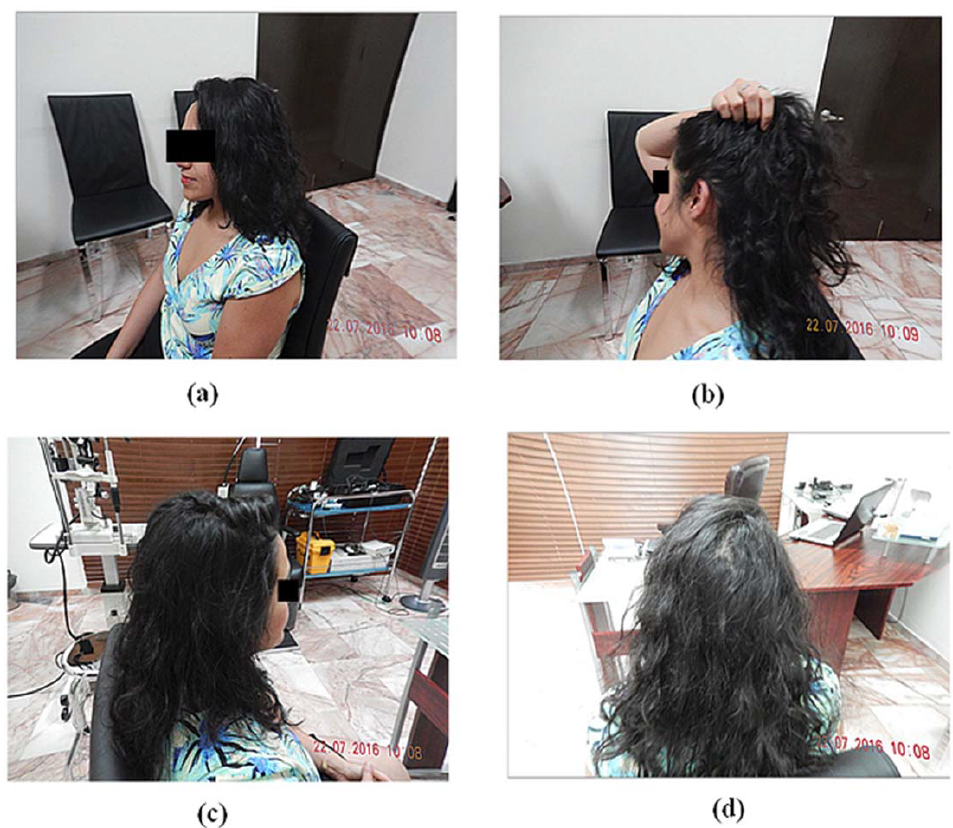 Figure 2: (a) After a year of treatment, a remarkable the improvement was observed. The reduction of the areas of alopecia areata began from the second week of having started the medication. (b) The appearance was remarkably normal, and the patient had grown more all over the head. (c) The areas of alopecia areata disappeared and the appearance of the hair was very satisfactory. It has had no relapses. (d) The hair looked normal and abundant. The patient was very pleased.

The diseases of the follicle hair seem to have a relationship, in some cases, with diseases of the epithelium pigment of the retina. In our more than one decade of ophthalmological practice, we have been using a medication developed by us (QIAPI 1) that stimulates the transformation of light (visible and invisible) into chemical energy by the means of dissociation of the water molecule; similarly like chlorophyll in the plants, its melanin in humans.

In the year 2002, we found the unsuspected inherent capacity of melanin to dissociate the water molecule [12], during an observational study about the three main causes of blindness (glaucoma, diabetes and macular degeneration by age) which started in 1990 and ended in 2002. The study that involved almost 6000 patients caught

the attention towards the omnipresence of melanin in the vicinity of optical nerves in each and every patient, regardless of the diagnosis [13]. Another interesting fact was that the blood vessels of the optic nerve and its vicinity seemed to respond to the presence of melanin (Figure 3). As we realized that melanin apparently had an anti- angiogenic effect, we reached a conclusion that was met in 95% of patients: “more the melanin less is the number of blood vessels and vice versa”. Trying to explain such an effect, we also found that “greater is the amount of melanin, higher is levels of oxygen in the tissues, and vice versa”. This finding resolved the problem, because the elevated level of oxygen is the best anti-angiogenic stimulator. 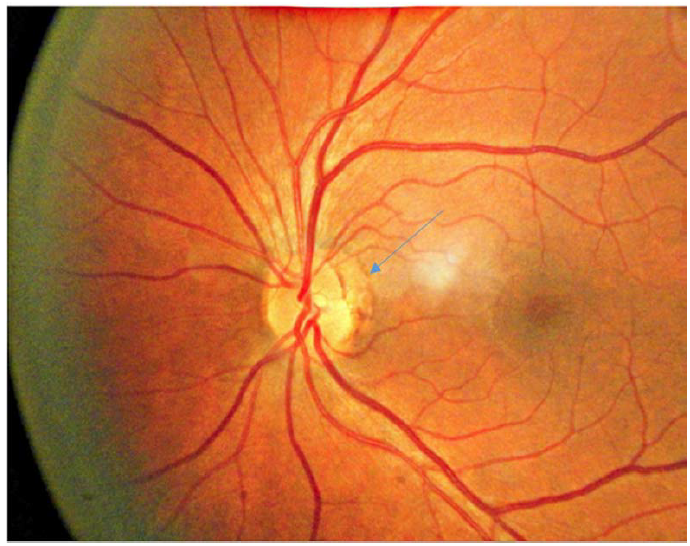 Figure 3: Photograph of fundus oculi of the left optic nerve in one patient. The arrow points toward the visible melanin as a delicate dark line.

The next riddle to be solved was to identify the source of the significantly higher amount of oxygen (10-34%) in tissues with least amount of pigment. The only source possible in the eye, after having considered and explored several options, was the water. But water does not give free oxygen, in fact it is needed to provide energy to dissociate it. After analyzing several possible biochemical processes, we came to the conclusion that melanin had this ability, which unknown before that.

Further analysis proclaimed that melanin is not only was capable of dissociating water it, but also re-form it, which can be outlined as below:

For every two molecules of water that is re-formed, 4 high-energy electrons are generated. This finding broke the previous dogma that the only source of retinal energy was glucose, as melanin helps the tissues in generating energy from the light.

As the investigation went on, we observed that the patients’ condition was better whenever the generation and distribution of energy from the melanin was in good condition. So we initiated the task of developing a drug that could modulate the process. The medication called QIAPI 1, is currently in process of patent in some countries14. We started testing this drug in 1998, first on ourselves, and then on our family. Finally, in 2004, we started to use this drug for patients, in accordance with several relevant ethical, scientific and legal requirements. The results were very encouraging in patients with retinal problem. So, we started treating the diseases associated with alterations of the pigmented retinal epithelium, as in the case of alopecia areata, and results came out as expected. Till date, we have treated several patients of alopecia areata with good results. One such treatment success has been presented in the Figure 1 and 2.

Melanin in its role as a generator of energy opens a new landscape in relation to the study and treatment of autoimmune disorders like alopecia areata.

The authors declare that there is no conflict of interest

The present work was funded by the Human Photosynthesis® Research Center, Aguascalientes, México