Comparative Efficacy of Unbaited Modified Vavoua and Nzi Traps in the Capture of S. niger niger M. 1851 and S. calcitrans L. 1758 in Ngaoundere-Cameroon

There is need for a simple, cheap and efficient collection and control tool for the different stable fly-species in hyper-infested foci. The efficacy of a modified unbaited Vavoua trap (MVT) was compared with an unbaited Nzi as a standard. Each trap model was pitched either inside or outside the cattle overnight pen with rotation taking place after four days for eight days in September 2018 in Ngaoundere. Fly collection was made every 24 hours and sorted using standard identification keys. In total, 2105 hematophagous flies were caught and constituted of 1417 S. niger (89 S.n/t/d), 124 S. calcitrans (8 S.c/t/d), 562 Musca spp. (25m/t/d) and 2 Chrysops distinctipennis (0.1 Cd/t/d). The overall mean catches with the MVT (50.96±57.16) was higher than with the Nzi (27.43±27.73), with no statistically significant difference (t=0.9, df=46.0, P=0.37). Higher mean catches were recorded outside the overnight cattle pen (47.79±55.27) than inside (39.83±55.40) with no statistically significant difference (t=0.5, df=46.0, P=0.62). Stable flies and tabanids were mostly caught outside the overnight stable, while Musca spp. were highly caught inside. Humidity and wind speed were the main drivers of the abundance of the flies caught and from the Pearson’s correlation test, there was a negative and significant correlation between the two meteorological parameters (r=-0.29, P=0.04). The MVT can serve as a simple and efficient tool for the survey and control of stable flies in the Adamawa plateau and elsewhere.

Stable flies (Stomoxys spp.) are blood feeding muscids that are morphologically identical to house flies (Musca spp.) in terms of colour (gray) and size (4 to 8mm) but differ in the presence of the proboscis in the former that is absent in the latter [1]. Stomoys spp. are important pests of cattle [2] with their painful bites resulting in the transmission of dangerous pathogens (bacteria, viruses, helminths, rickettsia etc.) [3]. Stomoxys niger and Stomoxys calcitrans are widely studied partly due to their cosmopolitan nature and their important role as pests of livestock and humans. Several works have focused on the ecology of stable flies using different trapping gears [4,5]. The first traps designed for stable flies was the sticky traps using Alsynite [6,7]. The field trial of Meifert et al. [8] and Rugg [9] was carried out to evaluate their efficacy. Basically, sticky or glue-like substances are applied to surfaces (plastic, woody etc) with either white, blue, black etc or combination of colours [15] that attract flies which are glued as soon as they alight on the sticky surface. More recently, fabric traps (vavoua and F3) initially designed for tsetse flies (Glossina spp.) control have been evaluated for Stomoxys spp. [5]. In Stomoxyinae infested part of Africa, fabric traps have been used for their control [10,11]. Some reports claim that the Nzi [12] trap is more specific to tabanids than stomoxyines, while vavoua [13] trap is more specific to stomoxyines than tabanids. Colour cues of both sticky traps and fabric have been identified to play an essential role in the attraction of stable flies [14,15]. The blue/black colours of traps simply mimic the natural forest edges where stable flies rest and digest their blood meals as well as reflect light in the UV range [16].

To improve on the efficacy of fabric and sticky traps, some authors have tested and compared their efficacy in combination with some odorants like octenol, acetone, CO2 and cow urine [10]. Because of the avoidance of the sticky traps by stomoxyines [17], the vavoua trap (example of a fabric trap) was confirmed to be an alternative for the monitoring of stable flies. Although studies on the efficacy of traps for S. calcitrans and S. n. niger are still ongoing [5], to the best of our knowledge, information on a simplified unbaited trap with high specificity for stable flies apart from vavoua does not exist. The study of Tunnakundacha et al. [18] reported that a high specificity and efficacy of Nzi and vavoua traps in stable flies and tabanids collection is not clear. Solo´rzano et al. [19] reported that stable flies were highly caught with the Nzi trap than vavoua. Based on the existing dilemma on the available fabric traps for stable fly collection and control, the present study was carried out to compare the efficacy and specificity of an improved unbaited vavoua trap with the Nzi trap as the standard.

Ngaoundere is the head quarter of the Adamawa region. It falls within the following geographical limits, Latitude 6° and 8° North of the equator and longitude 11° and 15° East (Figure 1). It has a Soudano-Guinean climate with two seasons (rainy and dry). The vegetation of Ngaoundere ranges from savanna, gallery forest and secondary forest. Ngaoundere is host for the main cattle market of the region and is in Mbidjoro that constituted our study site. Mbidjoro is 15km form the town of Ngaoundere along the Tibati motorable high way. The study site constituted of a mixed cattle herd with three breeds (Goudali, Akou, Charlorais and Holstein) and their cross breeds (metis). The cattle overnight pens were located 50 to 100m away from four poultry farm buildings. The poultry blocks were not fly proof. Eight herds of cattle were in the sampling area. The cattle density of the study site was 241 cattle heads/7 Km2. 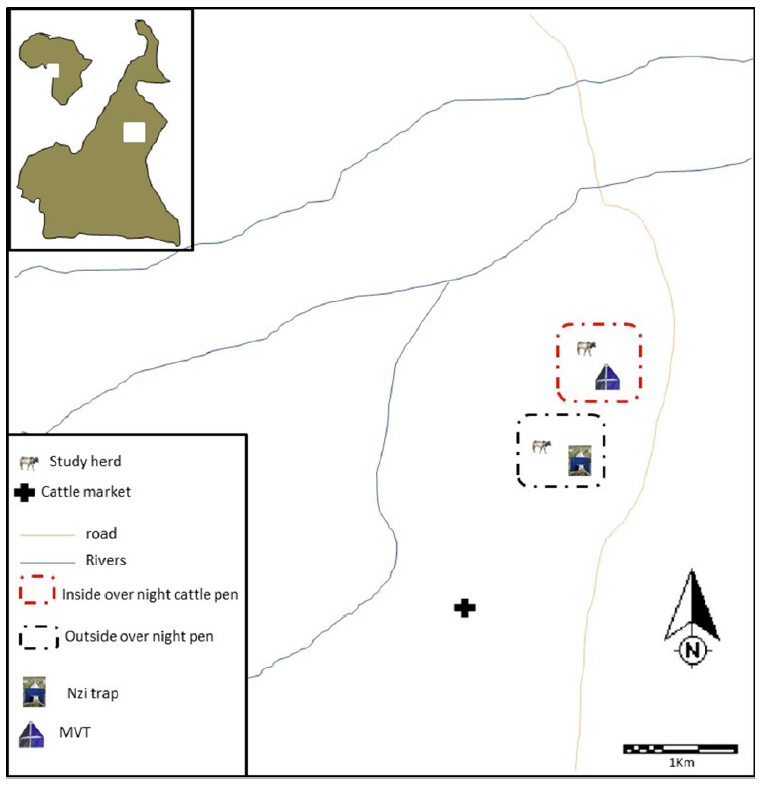 Figure 1: Map showing the cattle herd where trapping was carried out.

Unbaited Nzi (Figure 2) and Modified vavoua (MVT) (Figure 3) traps were pitched, one inside the cattle overnight stable and the other outside the grazing field. The two trap models were 500m from each other. A 2x2 Latin square with rotation was carried out. The cages of the traps were emptied every 24hours. Flies were collected into well labelled plastic bags for identification using a dissecting microscope. Stomoxys were identified using the key of Zumpt [1]. Tabanids identification was realised using the type-specimen morphological key of Desquesnes et al.

[20].The identification of the genus Musca was carried out using the key of Gregor et al. [21]. The MVT was a simple blue/black polyester trap with a trapezium-like blue/black core in the mosquito net section. The section of the trap protruding to the bottom of the mosquito net was in the form of a blue/black flat screen. The size of the MVT was 136cm x 87cm. To construct the MVT, a 125cm black and 125cm blue polyester material was required and the dimensions of the various parts prepared following figure 3. 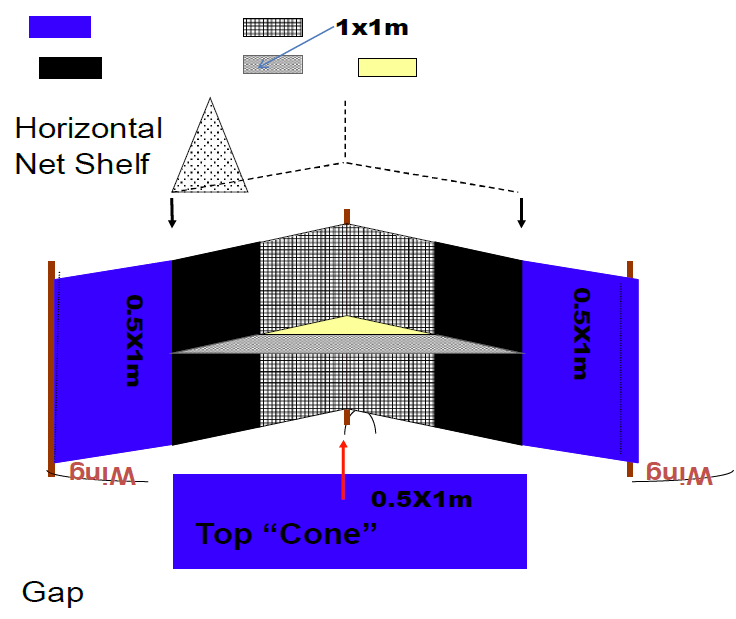 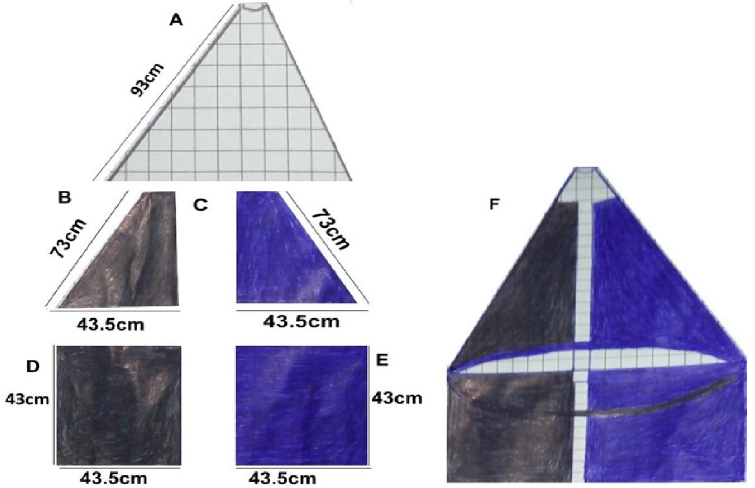 The abundance was defined by the Trap Apparent Density (ADT) known as the number of Stomoxys caught per trap and day:

The JASP statistical software of version 0.8.5.1 was used for the statistical analyses. The mean catches of the trap models and their positions was compared using the Student t-test. The interaction between weather variables was determined using the Pearson’s correlation test. All statistical tests were kept at the P<0.05 significant level. 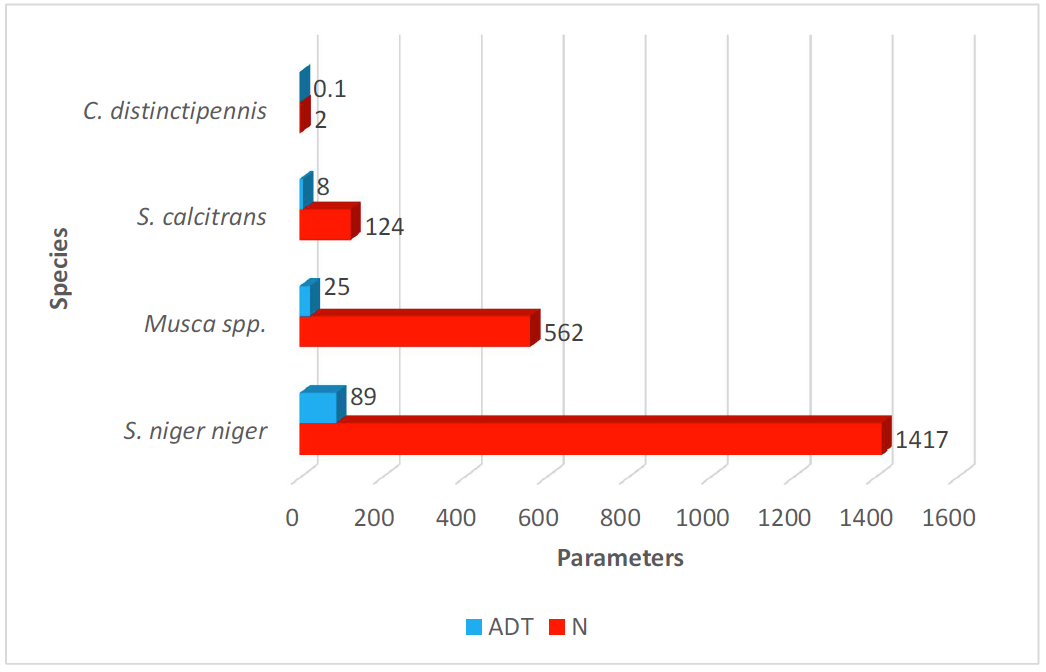 The daily catches revealed that peak catches were made during the third day (Figure 5A) and this day was characterised by temperature of 27 0C, wind speed of 8km/hr and humidity of 82% (Figure 5B). The interaction

Table 1: Interaction of the different weather variables during prospection. 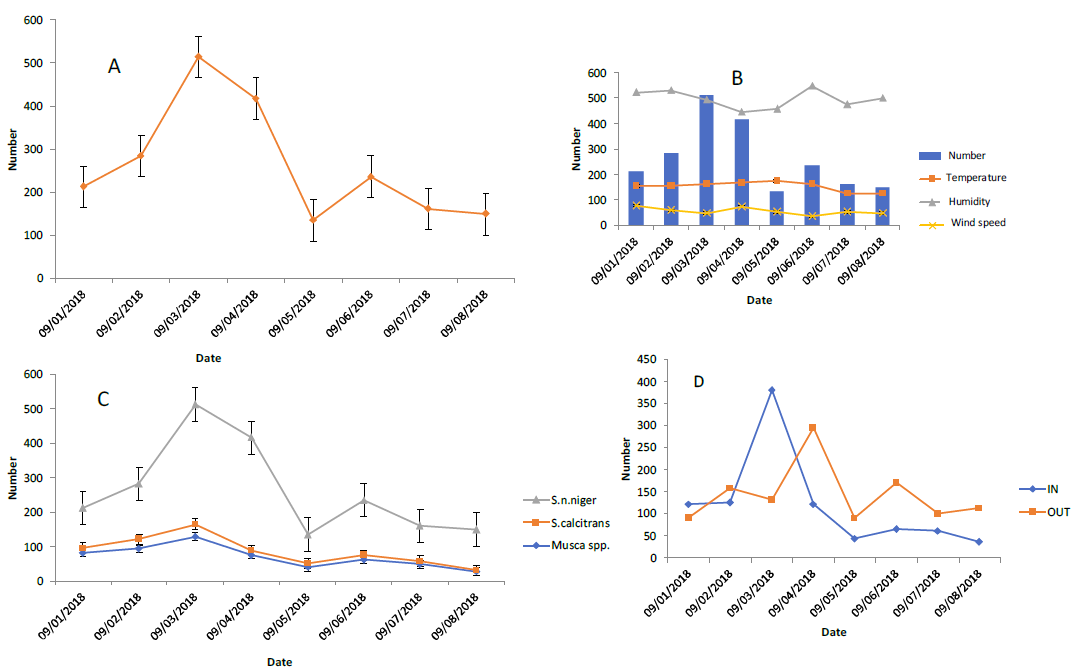 Table 1: Mean fly catches based on trap models and position

Three genera (Stomoxys, Musca and Chrysops) of flies were caught by the MVT and Nzi traps and is like the finding of Erwanas et al. [22]. The main daily fly catches using sticky traps by Tunnakundacha et al. [18] was slightly greater than the mean daily catches in the current survey using fabric traps. The differences in the catches could be because odor-baited sticky traps were used as compared to unbaited fabric traps used in the present study. Also, the study designs were different where a 2x2 latin square with four replications experimental design was used by Tunnakundacha et al. [18] as compared to the 2x2 latin square with one replication used by the current study. However, the advantage of using fabric traps over sticky traps is that they can be used for survey, an aspect that is not possible to carry out with the sticky traps because the glued flies cannot be easily identified because parts are usually destroyed upon removal. In addition to this reason, the study of Solo´rzano et al. [19] revealed the avoidance of sticky traps by Stomoxyinae hence making it difficult to use this tool for their survey. The present study recorded high mean catches (27.43±27.79 to 50.96±57.16 stable flies/day) with fabric traps as compared to the report of Murchie et al. [15] who recorded an average of 59 stable flies per week with sticky traps. The high record of S. n. niger as compared to other biting hematophagous counter parts is like the report of Lendzele et al. [23] and other authors in the Afro zoogeographical region [24,25]. The peak abundance of flies was noticed when the humidity was 80%. This humidity corroborated with the 50 to 80% range for the peak activity of S. calcitrans recorded by Charlwood and Lopes [26]. High numbers of stable flies were caught in nearby farm yard as compared to the inside of the cattle overnight stable. The high catches outside could be due to the proximity of the traps to the breeding sites of the stable flies [15, 27] because Stomoxyinae developmental substrates consist of faecally-soiled with decomposing vegetation as well as beddings from poultry and such potential breeding material were found outside of the cattle overnight stable where cattle graze as compared to the muddy nature of the inside of the cattle overnight stable. In addition to this reason, the poultry blocks found around the grazing field located outside the stable did not have fly proof windows and was a possible source of stable fly infestation of adjacent grazing fields. Hogsette and Ose [28] reported high catches inside the periphery of the zoological parks with no statistically significant difference with catches inside and outside. According to Hogsette et al. [29], best catches of stable flies are made near animals, but Murchie et al. [15] realised that stable flies were collected with sticky traps placed at the periphery of a cattle stable. The blue/black colour of the traps used in this trial simply mimic the natural forest edges where stable flies rest and digest their blood meal as well as reflect light within the U.V range [16].

The efficacy of the MVT as compared to the Nzi trap based on their mean catches revealed that the MVT was more efficient as compared to Nzi. The specificity of the trap models revealed that the MVT was more specific for S. n. niger and S. calcitrans as compared to Nzi, but the Nzi had a 100% efficacy for C. distinctipennis. The high specificity of the Nzi trap for tabanids has already been reported [16]. The environmental data collected during trapping days in the current study were favourable for the activity, survival and development of stable flies [30,31]. The scanty record of tabanids during the collection period reveal that the environmental factors did not favour their development because the trial was made in the rainy season with frequent rainfall characterised by flooding which might have destroyed the breeding sites of tabanids since they develop in marshy areas. However, it will not be wise to compare the results on the specificity of the two traps for tabanids because the survey period did not favour the emergence of adult tabanids.

The study led to the identification of three important fly-vectors: Chrysops distinctipennis, Stomoxys calcitrans and Stomoxys niger niger. The newly modified vavoua trap (MVT) was highly specific and efficient for Stomoxys spp. caught as compared to Nzi. The scanty catch record of Chrysops distinctipennis was made with Nzi. The traps will be tested during tabanid outbreak periods to evaluate their efficacy for this group. The MVT can serve as a simple and efficient tool for the survey and control of stable flies.

The Authors will like to declare no conflicts of interest in relation to this publication.

The study was successful thanks to the field assistance of Mr Aboubakary (Veterinary technician) and Kong Anita (DVM student).

Happy New Year full of joy,love , abundance and everlasting happiness. With the joy and happiness submit your new manuscript