Tuberculosis (TB) is an opportunistic infectious disease with more severe forms in HIV-1 infected patients. The aim of the present study is to investigate the role of IFN-γ in the other cytokines belonging to Th1, Th17, Th22, and Th3 groups and CD4+ cell counts in the HIV-1 infection in patients co-infected with Mycobacterium tuberculosis. Clinically diagnosed patients of HIV-1, TB and HIV-1 co-infected with TB (HIV-1+TB) groups were selected to test IFN-γ IL-17, IL-22, TGF-β, and also CD4 counts in the blood for the study. Our results showed that IFN-γ and IL-17 cytokines were higher in HIV-1 and TB patients in serum when compared with healthy normal subjects, but there was an insignificant difference when compared with those in HIV-1+TB with TB patients’ samples. Pleural fluid samples of the HIV-1+TB patients showed significantly higher in IL-22 and IFN-γ cytokines than in TB patients, whereas IL-17 showed insignificant differences. CD4+ cells were counted in the blood of HIV-1, TB, and HIV-1+TB patients, however, the results showed that the counts were significantly lower than in the healthy normal group. There was a significantly lower CD4+ count in HIV-1+TB co-infected patients compared to TB patients, but not with HIV-1 patients. The present study suggests that IFN-γ and IL-17 play a significant role individually in HIV-1 and tuberculosis infected patients and IL-22 in pleural fluid in tuberculosis, which differs from those in HIV1 co-infected tuberculosis patients due to the severely affected immune system.

Human immunodeficiency virus (HIV) infection remains the most common risk factor for the development of active tuberculosis (TB). Co-infection with Mycobacterium tuberculosis in HIV-1 patients is a leading cause of death due to deterioration of immunological functions [1, 2]. HIV-1 activity increased in patients infected with pleural TB demonstrated in pleural fluid and pleural mononuclear cells [3]. IFN-γ as biomarker has been used in the clinical assessment in TB patients. Clinical manifestations of TB co-infected with HIV-1 patients are usually severe, with diffuse pulmonary involvement in the pleural fluid. IL-17, IL-22 and TGF-β cytokines play immunological roles, particularly in mycobacterial active tuberculosis and in granuloma formation, whereas the regulation of IL-17A and IL-22 requires TGF-β and IL-23 and IL-1b [4-5]. Between TB and HIV-1, both infections have profound effects on the immune system and the ability to disarm the host’s immune responses. HIV-1 co-infection with M. tuberculosis has the risk of reactivation of in the latent stage of TB and exacerbates HIV-1 infection. CD4+ T cell counts of HIV-1 infected with pulmonary TB (PTB) are higher than other opportunistic infections due to T cell depletion and dysfunction [6], due to diminishing M. tuberculosis antigen-specific IL-17 and IL-22 production [7].

A laboratory study was conducted on clinical-microbiologically diagnosed patient samples of HIV-1, TB and HIV-1+TB patients to investigate cytokine responses of IFN-γ, IL-17, IL-22, TGF-β in serum and pleural fluid of pulmonary tuberculosis patients with and without HIV-1 co-infection.

The clinical study was conducted at the Microbiology Department, R.D. Gardi Medical College, Ujjain, (MP) India from 2014-2016. A Government approved guidelines adopted by an ethical committee established in R. D. Gardi Medical College, and the Institutional Review Board-approved written consent was obtained from all the participants. Patients on anti-tuberculous, anti retroviral therapy or corticosteroid treatment were not included in this study. A clinical study of patients was applied for the statistical analysis using an Inter Quartile range (IQR) for the difference between 3rd and 1st quartile, and the median for IQR measures. The diagnosis of HIV status of the patient was confirmed by Microlisa HIV kit and tuberculosis was confirmed by sputum or bronchoalveolar lavage positive by Ziehl Neelsen stain and mycobacterial culture. Serum and pleural fluid samples of HIV-1+TB and TB patients were collected and performed enzyme-linked immunosorbant assay (ELISA) kits, purchased from Ray Biotech, USA. The ELISA plate was read on ELISA reader at 450 nm by LisaScan EM, Erba Mannheim.

Pleural fluid samples of HIV-1+ and TB co-infected patients were tested for ADA (Adenosine Deaminase Activity). The titer in aspirated pleural fluid was measured by colorimetric method using ADA-MTB kit (Tulip diagnostics (P) Ltd. India). The total ADA activity was measured by spectrophotometer at 570-630 nm. CD4+ cells in the blood samples were counted in a BD FACSCount System of (Becton and Dickinson) in the Central Laboratory of R.D. Gardi Medical College. CD4 reagents were used specifically for enumerating the absolute cell counts of CD4+ T lymphocytes. The statistical analysis was applied to compare the cytokine levels between the two groups of the two-tailed p value of <0.05 for a nonparametric t-test test by GraphPad software (La Jolla, CA). The statistical t’ test (unpaired samples) was applied for the Linear regression (R2) analysis on p<0.05 of straight-line relationship between the individual Log2 value of an each cytokine and between two variable y against that of the independent variable x was determined by GraphPad Software and QuickCalcs Linear regression calculator. 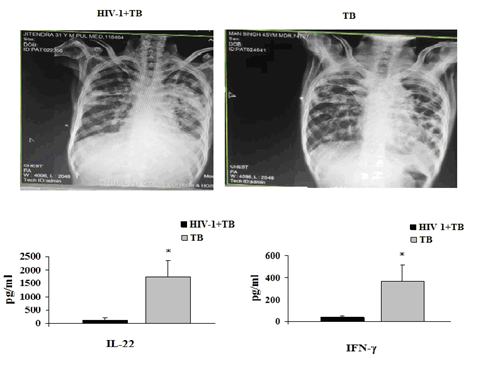 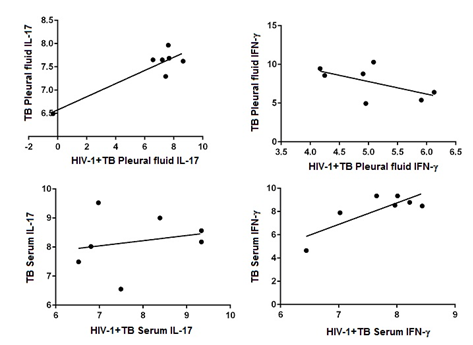 Our present study indicates the role of IFN-γ and IL-17 with other cytokines like IL-22, TGF-β, and CD4 cells in HIV-1, TB and HIV-1 co-infected with TB patients. We measured the serum levels of pro-inflammatory cytokines (IFN-γ and IL-17) and anti-inflammatory cytokines (IL-22 and TGF-β). The main findings of our study showed: 1) the serum IFN-γ level was significantly higher in HIV-1 and TB patients, 2) patients with HIV-1+TB had lower IFN-γ levels and IL-22 and CD4 cell counts compared with the TB patients, 3) the level of IL-22 and IFN-γ were significantly lower in the pleural fluid of HIV-1 co-infected with TB than the TB patients, 4) CD4 counts were lower in HIV-1+TB patients than the TB patients and the normal healthy subjects, and 5) HIV-1+TB co-infected did not seem to affect serum level of IFN-γ and IL-17 and IL-22 and TGF-β compared with HIV-1 patients. CD4 counts were not statistically difference between TB positive with HIV-1 and TB negative HIV-1 patients.

Our study showed that IFN-γ, IL-17 and IL-22 cytokines were increased significantly in serum from HIV patients. There was a significant increase in IL-22 and IFN-γ in the pleural fluid of TB patients when compared with HIV-1+TB co-infected patients. This suggests that imbalances in Th17 in TB and HIV-1 co-infection were probably due to the interaction of Mycobacterium antigens with previous sensitized T-lymphocytes to release other different cytokines [8].

The importance of CD4 T lymphocyte function is seen in patients with HIV, where the risk of TB increases with the decrease of cell counts. Clinical assessment of IFN-γ level in the serum of TB has been used to determine as biomarker compared to the pathogenesis of HIV-1+TB. However, probably IFN-γ exhibits polyfunctional effects on immune activation, proinfammatory responses and immunomodulation. The present study revealed a high level of IFN-γ in TB than the HIV-1 patients with primary TB infection. In HIV-1 chronic disease, IFN-γ levels decline to a steady state that is often equivalent to healthy controls [9, 10]. The primary TB infection in HIV-1 patients has induced IFN-γ production that has reduced the adaptive immune responses to the development of HIV-1. Such inflammatory activities can promote HIV-1 infection and may cause a higher viral set point before T cell immunity can control the HIV-1 load.

HIV-1 exposure with pulmonary tuberculosis infection is associated IL17 and IL22 responses, both systemically and at the site of mucosal exposure impairs Th1 and Th17 [11]. IFN-γ-producing CD4 T act as co-stimulators to activate CD8 T lymphocytes is essential for CD8+ T cell function in Mycobacterium tuberculosis infection [12]. Interferon-γ and IL-17 play a pivotal role in the protective immune response against M. tuberculosis associated with viral replication [13, 14]. The importance of CD4 T lymphocyte function is seen in patients with HIV, where the risk of TB increases with the decrease of cell counts.

The immune responses to M. tuberculosis showed that B cell and humoral immunity interacts with T cells and other effector cells [15, 16]. A variety of effector lymphocyte subsets are induced by infection, but not all responding cells make IFN-γ  [17].  On the other hand, IL-22 cytokine is produced by innate lymphoid cells and natural killer cells. Th1 and Th17 and Th22 cells bind to IL-22R1 receptor which is expressed on non-hematopoitetic lung epithelial cells [18]. Th17 cells have a potential impact on tuberculosis (TB) infection when compared with healthy persons. IFN-γ and Th17 cells in tuberculous pleural effusion indicate that Th17 cells contribute to the immunopathogenesis of tuberculous pleural effusion [19]. In HIV infection, TGF-β+NK and IL-10+NK cells play negative regulatory roles. TGF-β is a cytokine release immunosuppressive factor in HIV disease and promotes virus replication in infected monocytes and peripheral blood mononuclear cells and increases susceptibility to opportunistic infections [20].

Our study concludes the findings that the serum IFN-γ level was significantly higher in HIV-1 patients and also in primary TB patients than the normal healthy subjects. CD4 counts were lower in the HIV-1+TB group than the TB and normal healthy subjects. Patients with primary HIV-1+TB had insignificant differences in IFN-γ, IL-17, IL-22 levels in serum and CD4 cell counts, compared with the HIV-1 control group. The level of IL-22 and IFN-γ were significantly lower in the pleural fluid of HIV-1 co-infected with TB than the TB patients. TGF-β did not seem to affect serum level in HIV-1+TB co-infection as there was no statistically significant difference between TB positive and TB negative HIV-1 patients. The role of IFN-γ  and IL-17 and IL-22 did not appear significant high in HIV-1 co-infected tuberculosis (HIV-1+TB) patients due to severely affected immune system.