Human embryonic stem cells (hESCs) possess unique properties, including the maintenance of pluripotency and the capability to be propagated indefinitely under certain in vitro conditions [1, 2]. However, during culturing these cells can accumulate genomic alterations and epigenomic changes that cause them to develop towards cancer-like cell types [3, 4]. After transplantation, these transformed cells can form highly malignant germ cell tumors (GCTs) [5, 6]. In humans, GCTs often appear at gonadal sites, e.g. in the testis [7], and testicular GCTs represent the most common cancer in young men [8]. Although originating from the same cellular precursor, GTCs can be divided into seminomas and non-seminomas which are categorized as distinct entities [9]. Cells of non-seminomas exhibit features of pluri- to totipotency, and are thus regarded as malignant embryonic stem cells, while seminoma forming cells have more limited potency to differentiate [10]. Very little is known about the microenvironment of non-seminoma GCTs and the role of different stromal factors in the initiation and progression of germ cell tumorigenesis [11, 12]. Extracellular proteoglycans (PGs) are key molecules in mediating signals from the ECM into the cells [13, 14, 15]. From these, the prototype of the small leucine-rich PGs (SLRPs), decorin, has gained the most interest in the regulation of cell differentiation and tumorigenesis [16-23].

Decorin is composed of about a 42 kDa core glycoprotein with one glycosaminoglycan (GAG) side chain of either dermatan sulfate or chondroitin sulfate. Its expression was shown to be induced in normal hESCs during their early differentiation into embryonic bodies (EBs) [18, 24]. On the other hand, decorin expression has been shown to be down-regulated in malignant cells as seen in murine teratocarcinoma cells compared with healthy cells [25]. Also, the intestinal tumor formation was shown to be associated with decorin deficiency in Dcn mouse model [26]. In the present study, we first analyzed the expression of the SLRPs in normal and karyotypically abnormal hESCs during early cell differentiation in vitro, and in different human testicular non-seminoma GCTs in vivo, using publicly available databases. Next, we focused on decorin, the prototype of the SLRPs, and localized its expression in healthy human testis and in various human testicular GCTs.

Table 1: List of the screened SLRP genes in differentiating hESCs and in IST Online Databank.

IST Online (http://ist.medisapiens.com/) is the largest integrated and annotated human gene expression data source in the world. In this study, the database was used to compare relative gene expression of the SLRP family members (Table 1) in healthy testis tissue and different testicular non-seminoma GCTs, namely teratoma and embryonal carcinoma.

Human testicular samples included 1 healthy testis tissue and 9 testicular non-seminoma GCTs (6 teratomas, 1 embryonal carcinoma, and 2 mixed GCTs). Teratomas included 1 benign mature teratoma, and 5 malignant teratomas. Healthy testis tissue was derived from orchiectomy of both testes due to prostate cancer. All samples were obtained from the archives of Turku University Hospital, Department of Pathology and Forensic Medicine, Turku, Finland. This study followed the Declaration of Helsinki, and sample collection and study protocol were approved by the National Supervisory Authority for Welfare and Health (Dnr_7324/05.01.00.06/2011). The samples were fixed at 10% neutral-buffered formalin, embedded in paraffin and cut into 5 µm consecutive sections. Sections were used for hematoxylin and eosin (HE) staining, immunohistochemistry (IHC), and in situ hybridization (ISH).

2.5 In situ hybridization for decorin

ISH for decorin was performed on all tissue samples by probing the samples with human decorin antisense and sense single-stranded RNA riboprobes as previously described in detail. ISH analyses were performed in the Department Medical Biochemistry and Genetics. Similarly to the IHC images, the Pannoramic Digital Slide scanner (3DHISTECH) and Pannoramic Viewer (3DHISTECH) were used to view the images.

3.1 Expression of SLRPs in normal and karyotypically abnormal hESCs during early cell differentiation

Gene expression pattern of the SLRPs in normal hESCs, compared with culture-adapted hESCs with karyotypic abnormalities, during early cell differentiation was analyzed using the publicly available transcriptome data by Enver et al. [3]. The analysis revealed that in normal hESCs, the expression of two SLRPs, namely decorin (Figure 1) and lumican (data not shown), was markedly increased during cell differentiation into EBs. In contrast, in abnormal hESCs, no similar increase in either decorin or lumican expression was detected during the formation of early EBs. 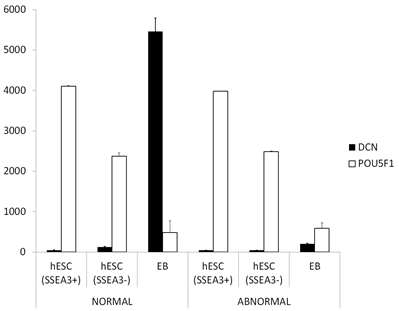 Next the relative gene expressions of the SLRPs (See material and methods, Table 1) were analyzed using IST Online databank (http://ist.medisapiens.com/). The analysis revealed that the relative expression of most SLRPs, was higher in teratoma samples than in embryonal carcinoma (data not shown). Representative box plot image of the gene expression of the prototype member of the SLRPs, decorin, is shown in Figure 2. As an exception to other SLRPs, the expression of nyctalopin, opticin and podocan-like protein 1, was on similar level in teratoma tissue compared to embryonal carcinoma (data not shown). Gene expression of decorin in healthy testis is included in Figure 2 to indicate that decorin is expressed also in differentiated human testicular tissue.

Figure 2: Relative gene expression of decorin in healthy human testis, teratomas and embryonal carcinomas. Analyses are based on IST Online database. Note that decorin expression is at the highest in teratoma tissue samples. The continuous lines in the box plot images represent the median expression level of decorin in different tissue samples and capped bars in the box blot images indicate standard deviations of the results included in the databank.

Decorin localization in different testicular tissues was performed using ISH and IHC. According to ISH for decorin, in healthy adult human testis, decorin mRNA expression was detected in spindle-like peritubular myoid cells surrounding seminiferous tubules, and in Leydig cells residing in the interstitium between the tubules (Figure 3). Also, individual smooth muscle cells in the vascular wall of small arteries were positive for decorin mRNA expression. In contrast, germ cells as well as Sertoli cells inside the tubules were negative for decorin mRNA. This was also true for vascular endothelial cells within the testis. The results of the IHC analysis for decorin were similar to those of ISH mentioned above. In healthy testis, positive decorin immunoreactivity was detected in peritubular myoid cells, Leydig cells and the wall of small arteries, while germ cells and Sertoli cells were negative for decorin (Figure 3 C-D).

Figure 3: A representative tissue sample of a healthy adult human testis. (A) HE staining of testis and epididymis. Images B-D are magnified views from the marked testis area in image A; (B) HE staining; (C) ISH for decorin; (D) IHC for decorin. Positive DIG-reaction in ISH can be seen in purple and positive immunoreactivity in brown. Arrows point to decorin positive peritubular myoid cell (MC), Leydig cell (LC) residing in the interstitium between the tubules, and smooth muscle cell (SMC) in the vascular wall of a small artery. Scale bar in image A=2 mm, and in B-D=200 µm.

ISH further revealed that in the tissue sample representing mature differentiated teratoma, decorin mRNA was widely detected in stromal cells inside the teratoma tissue (Figure 4). However, epithelial cells, fat and glial tissues as well as endothelial cells were negative for decorin mRNA. Regarding the IHC, positive immunoreactivity for decorin was seen widely within the tumor area (Figure 4D). 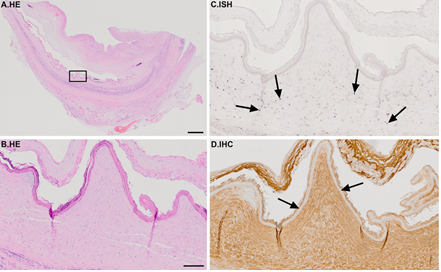 Figure 4: Representative tissue sample of a benign embryonal testicular teratoma. (A) HE staining. Images B-D are magnified views from the marked area in image A; (B) HE staining; (C) ISH for decorin; (D) IHC for decorin. Positive DIG-reaction in ISH can be seen in purple and positive immunoreactivity in brown, respectively. Arrows in image C indicate decorin expressing stromal cells. Arrows in image D point to decorin negative epithelial layer. Note that decorin expression and immunoreactivity are widely detected in the teratoma sample. Scale bar in A=2 mm and B-D=200 µm. 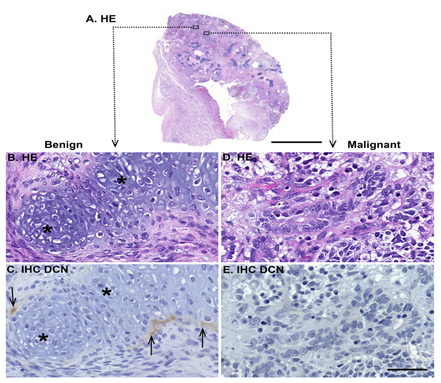 Figure 5: Representative tissue sample of a malignant testicular teratoma. (A) HE staining. Images B-E are magnified views from the marked area in image A., and they show examples of benign (B-C) and malignant areas (D-E) inside the tumor tissue. (B) and (D) are HE staining; (C) and (E) are IHC for decorin. Positive immunoreactivity can be seen in brown. Note that decorin immunoreactivity is detected only in specific areas of differentiated, benign tumor, in this case surrounding the cartilage tissue. Undifferentiated teratoma tissue does not express decorin. Asterisks in images B-C indicate differentiated cartilage tissue, and arrows in image C point out individual decorin expressing benign cells surrounding the cartilage. Scale bar in image A=5 mm, in B-E=50 µm. 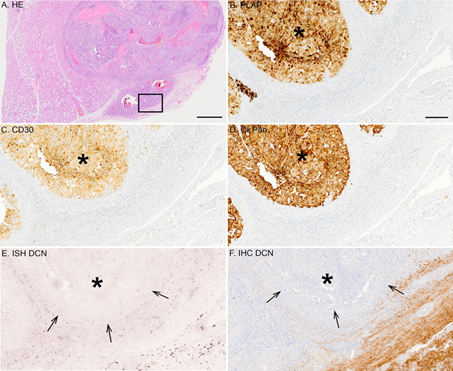 Figure 6: Representative tissue sample of a malignant testicular embryonal carcinoma. (A) HE staining; (B) IHC for PLAP; (C) IHC for CD 30; (D) IHC for CkPan; (E) ISH for decorin; (F) IHC for decorin. Positive DIG-reaction in ISH can be seen in purple and positive immunoreactivity in brown, respectively. Arrows in images E and F point to the border of the carcinoma tissue and asterisks mark the area of the carcinoma. Note that malignant cells are totally negative for decorin expression. Scale bar in A 2 mm and B-F=200 µm.

The expression of the SLRPs were analyzed using IST Online database (http://ist.medisapiens.com/) where the relative gene expression of each molecule was compared between differentiated teratoma tissue and undifferentiated carcinoma tissue of testicular origin. The results showed that the relative gene expression of most SLRPs was markedly upregulated in teratoma samples, compared with embryonal carcinomas. Gonadal teratomas such as pre-pubertal testicular teratomas are considered to be derived from benign, non-transformed germ cells, the so-called primordial germ cells [33]. However, when teratomas develop in the post-pubertal testis they are usually derived from both normal germ cells and carcinoma in situ cells [34]. Nevertheless, pre-pubertal teratomas can be morphologically similar to post-pubertal ones [7]. This emphasizes the importance of identifying different molecular and cellular factors in the pericellular matrix of GCTs. In the present study, we have shown that the expression of specific ECM macromolecules, particularly decorin, is involved in germ cell derived tumorigenesis.

Additionally, we localized decorin mRNA and molecule in different human testicular GCT tissue samples using ISH and IHC, and found that its expression takes place only in the normal connective tissue, and is completely lacking in the areas of malignant cells. Previously, decorin expression in human testis has been located in the dispersed interstitial fibroblastic cells, and in the perivascular cells of small arteries and capillaries, whereas germ cells and Sertoli cells have been shown to be negative for decorin expression [35, 36]. According to the Human Protein Atlas web portal (http://www.proteinatlas.org), decorin immunostaining in healthy testis has also been shown to be expressed in low levels in Leydig cells [37-38]. These results are in accordance with our present study. Interestingly, Leydig cells have been shown to originate from both vascular smooth muscle cells and pericytes [39-40], as well as from testicular myoid cells [41]. In our study, individual cells representing all the aforementioned cell types were found to be decorin positive. Thus, decorin may be involved in the differentiation of Leydig cells.

Because benign teratoma represents a differentiated tumor in comparison to undifferentiated malignant teratomas and embryonal carcinomas, the observed lack of decorin in malignant tumors may in part be involved in the progression of tumorigenesis in human GCTs via multiple actions. Decorin is able, among other functions, to evoke cell cycle arrest, apoptosis, and antiangiogenic programs [22, 42, 43, 44, 45]. Furthermore, in breast carcinoma cells, decorin has been demonstrated to induce mitophagy [46] which is known to play an important role in the maintenance of cellular homeostasis. Defects in mitophagy promote tumorigenesis [47, 48]. We have previously shown that cancer cells of epithelial or mesenchymal origin are not able to express decorin [49, 50, 51]. To the best of the authors’ knowledge, decorin expression has not been explored before in human GCTs.

This work was supported by the Research Funds of Turku University and University Hospital, Satakunta Central Hospital and Cancer Foundation of Southwestern Finland.

The excellent technical assistance of Jaakko Liippo and Sinikka Collanus is highly appreciated.