Fluoride application is an important strategy to reduce demineralization and enhance remineralization in human teeth. This study aimed to evaluate the effect on enamel hydroxyapatite (HA) crystallinity (C) of a sodium fluoride-releasing rubber cup compared to a non-fluoride rubber cup, using Fourier Transformed Mid Infrared Spectroscopy (FTMIR) analysis. First class direct composite restorations were performed in ten sound extracted molars. Teeth were then divided into two groups (n=5): Control group, polished with non-fluoride rubber cup (noFHA), for 10 s; Tested group, polished with a sodium fluoride-releasing rubber cup (FHA), for 10 s. Samples were scraped off on the treated surfaces with abrasive paper and the dust was analyzed using FTMIR. Spectra were acquired in the range of 4000-400 cm-1 and each spectrum represented the average of 5 measurements. Phosphate (PO4) vibration at 604 cm-1 was used to analyze C: the full width at half maximum (FWHM) of noFHA was lower than the one of FHA; thus, sodium fluoride, contained in the rubber cup, increased C. The absorption at 1090 cm-1 can be considered an additional marker of C, indeed the peak of FHA was higher than the one of HA and noFHA, thus suggesting increasing and stabilizing of the enamel C. In conclusion, the tested sodium fluoride-releasing rubber cup could be an effective polishing system since it not only allows to polish the tooth surface, but also improves the C of enamel HA, thanks to the quick bond done by fluoride.

Despite all the efforts and advances made in the prevention of tooth demineralization and decays, these pathologies still affect a large number of patients [1]. Dental tissues are continuously undergoing cycles of demineralization and remineralization [2] and caries occurs when demineralization exceeds remineralization [3]. However, the progression of dental decays is a slow process, and, during early stages, non-invasive procedures allow to prevent demineralization, converting the lesion to inactive state from an active state [4, 5], thus enhancing remineralization [6, 7]. In the past decades, various remineralizing agents containing fluoride, calcium, and phosphate ions in various forms and concentrations, were introduced [8-10]. Among these preventive measurements, there are several fluoride-containing products for professional applications with anticariogenic effects [4, 7, 11]. The role of fluoride in the prevention and treatment of erosion and teeth demineralization has long been questioned [12, 13]. Traditional fluoride applications, using monovalent fluorides in low-to-moderate concentrations, such as in toothpastes and mouth rinses, were observed to have preventive effect [12, 14]. Sodium fluoride (NaF) varnish is one of the most concentrated fluoride products commercially available and it has been widely used in Europe for decades [15].

Rubber cups, in combination with prophylaxis pastes, are commonly used for supragingival professional tooth cleaning and polishing. Recently, fluoride-releasing rubber cups were introduced, in order to simultaneously fluoridate the enamel, without a prophylaxis paste, and polish the tooth after a restorative procedure [16, 17]. The two major aspects of fluoride action are: (i) the inhibition of demineralization, and (ii) the enhancement of subsurface remineralization of enamel surface [15]. Fluoride, in the aqueous phase at the apatite crystal surface, plays a determining role in the inhibition of enamel or dentin demineralization [4, 18]. As the pH rises, new and larger crystals that contain more fluoride in form of fluorohydroxyapatite crystals are formed, reducing the enamel demineralization with an increase of remineralization [19, 20]. Hydroxyapatite (HA) is composed of calcium, phosphorous, oxygen and hydrogen atoms with the chemical formula Ca10(PO4)6(OH)2, characterized by a hexagonal unit cell. Its study and description are of great importance in the field of biomaterials, because HA is the main constituent of bone, enamel and dentine [21]. The crystallinity (C) is correlated to the degree of order within the crystals. In the scientific literature, two ways are reported to measure the C: X-ray diffraction and Infrared Spectroscopy [21, 22]. The ions substitution introduces distortions in the apatite and the C of HA can be modified: in the case of F-, replacing OH-, the C is increased, due to the F- small ionic radius, producing a tiny unit cell volume [23, 24]. The present study is the first report evaluating the effect on enamel hydroxyapatite C of a rubber cup, releasing sodium fluoride at 0.9% used to polish teeth after resin-based composite restorations. The effectiveness of the tested material was compared with a non-fluoride rubber cup, by means of Fourier Transformed Mid Infrared Spectroscopy (FTMIR). The null hypothesis was that sodium fluoride, contained in the tested rubber cup, is able to improve the C of human enamel HA.

After routinely performed extractions of third molars for orthodontic or prosthetic reasons at the Section of Stomatology of the Polytechnic University of Marche, ten sound teeth were collected. Teeth were washed in an ultrasonic bath with distilled water for 2 minutes in order to remove blood and biological remains, and then carefully examined to exclude the presence of lesions and decays, including hypoplastic defects and cracks; elements exhibiting any of these features were excluded. Afterwards, teeth were stored in artificial saliva. On each tooth, a class I cavity was created using a diamond burr (FG755F-5, Kerr, U.S.) and the restoration performed using a simplified adhesive (Scotchbond Universal Adhesive, 3M ESPE, St. Paul, MN), followed by a nanohybrid resin-composite (Filtek Supreme XTE, 3M ESPE, St. Paul, MN), polymerized with the lamp Elipar DeepCure S (3M ESPE, Seefeld, Germany) for 40 s. Subsequently, teeth were divided into the following two groups (n=5):

The rubber cup was used with a slow handpiece at 6000 rounds/min, one for each sample. All the procedures were performed by single dental operator to minimize operator changes in variability. Then, the samples were washed with distilled water, dried and analyzed in order to evaluate the C of HA in enamel, using FTMIR spectroscopy [25]. Samples were scraped off on the treated surfaces with abrasive paper, transparent in the infrared, and were analyzed using a Perkin Elmer Spectrum GX1 spectrometer, equipped with a Universal attenuated Total Reflectance (U-ATR) accessory. The spectra were acquired in the range of 4000-500 cm-1, 64 scans and 4 cm-1 spectral resolution, and each spectrum represents the average of 5 measurements.

used. After curve-fitting of the obtained spectra, position, height, full width at half maximum (FWHM) and area under the curves were measured (Figure 2). The most intense band of PO4 was found at 1090 cm–1 in FHA, while, in noFHA it was at 1040 cm–1 [27]. Moreover, other spectra were obtained and compared: the spectrum of syntetic HA (pureHA) and the spectrum obtained from the dust, derived from noFHA, mixed with NaF and water, at pH=6, in order to simulate the saliva effects (Mix) (Figure 3). 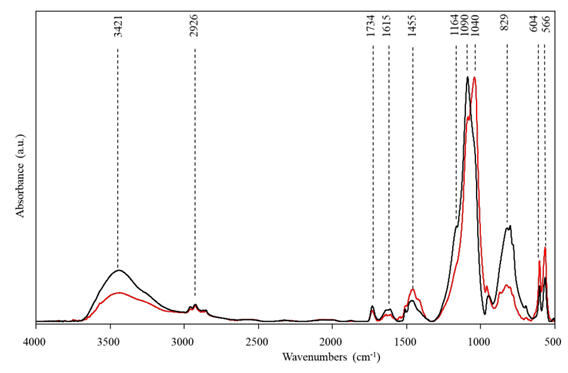 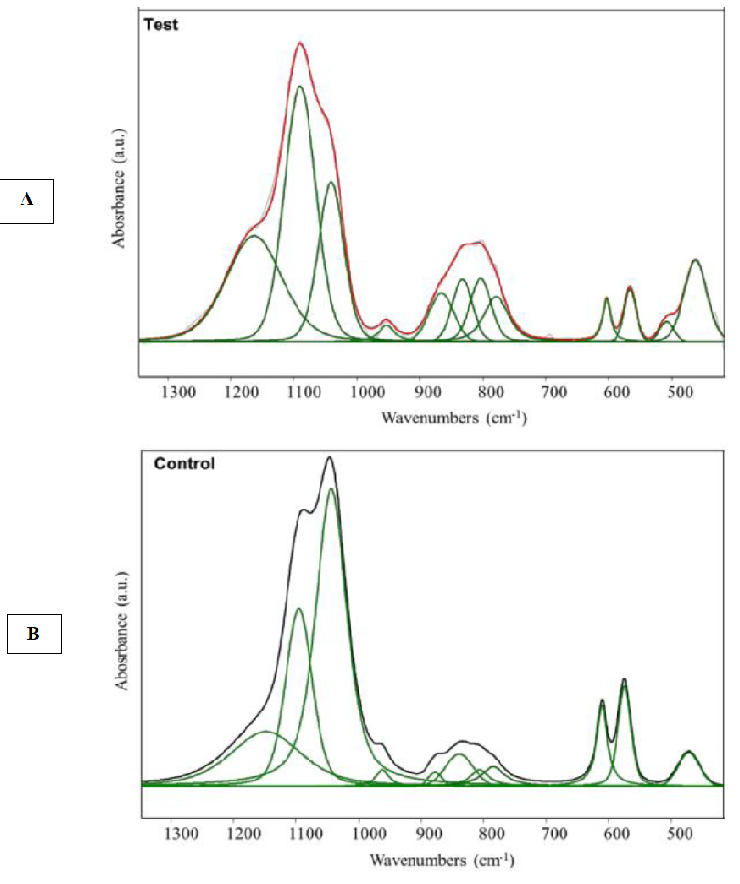 Figure 2: Mixed Gaussian-Lorenzian curve-fitting for FHA (Test, A) and noFHA (Control, B) samples. In FHA (A), the red curve and in noFHA (B) the black one represented the average curve deriving from the obtained spectra. 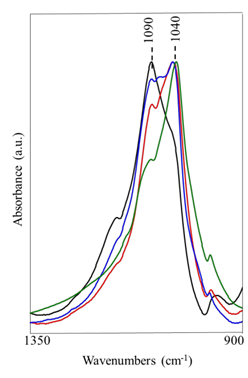 Enamel consists of 96% (wt%) inorganic matrix and 4% (w/w) organic material (mainly lipids and noncollagenous proteins), as well as water, which occupies the free spaces between HA crystals [28]. HA has a hexagonal crystal structure, consisting on isolated PO43− tetrahedra connected by a network of distorted octahedra and twisted trigonal prisms, both of which accommodate Ca2+, whereas OH− are located at the corners [28-30]. FTIR is a technique providing information especially about bonds of molecules. Chemical groups (e.g., hydroxyl, phosphate, amide) can be identified by their specific absorption at different wavenumbers. Because the spectra of these mineral components are quite distinct, vibrational spectroscopy has been extensively used to study all of these tissues, providing information on the nature of the present mineral phases, as well as quantitative information on the changes in mineral and matrix composition as mineralization occurs, and the nature and amounts of substituents in the mineral [25]. In particular, PO4 vibration at 650-500 cm-1 has been used to analyze the C of the apatite domains by FTMIR, using the method proposed by Shemesh et al. [31]. According to his study, the apatite C is inversely proportional to the FWHM of the peak at 604 cm-1, assigned to the phosphate ions [21, 31-33]. In this study, the FWHM of the peak at 604 cm–1 of noFHA is around 22.9, while of FHA is around 16.8. The C of noFHA is lower than the one of FHA; thus, NaF, contained in the rubber cup, results to increase the C of HA, being our results in agreement with the conclusions reported in Shemesh’s study [31]. Moreover, the absorption at 1090 cm-1 can be considered an additional marker of HA, while the peak at 1040 cm-1 is a marker of HA amorphous structure [27, 34]. In Figure 3, the height of the peaks at 1090 cm-1 shows different trends. C decreases as follows: FHA>Mix>pureHA>noFHA. This is probably because, using a non-releasing rubber cup during polishing, the amount of HA, contained in enamel, is reduced. On the contrary, if a fluoride-releasing rubber cup is used, fluoride could bind to HA, forming fluorohydroxyapatite, which is a more resistant compound than the HA [35-38]. Thus, as showed in Figure 3, the peak at 1090 cm-1 related to FHA is the highest, increasing and stabilizing enamel C. To confirm this finding, the height of the band of FHA at 1040 cm-1 is the lowest, because the component of amorphous HA is less than in the other samples. Dental prophylaxis involves the placement of pumice or an abrasive paste in a rubber cup to the clinical crowns of the teeth, in order to remove plaque, salivary pellicle and extrinsic stains before fluoride application [39]. This fact could result in a greater amount of fluoride contacting the enamel surface, thus enhancing its anti-cariogenic property. Therefore, a polishing treatment, such as the one tested in our study, based on the simultaneous action of cleaning/smoothen dental surface, in adjunction with fluoride bonding, can be helpful in the inhibition of dental caries as well as in the prevention of secondary caries in the restored tooth [40]. According to this, the use of topical fluoride within the polishing rubber cup, as routine part of the final step of many restorative procedures, could enormously simplify the clinical practice, allowing to fluoridate enamel and contemporary polish the restoration. Previous studies analyzed the effect on the surface roughness and surface gloss of tooth enamel and composite resin, when exposed to a paste-free prophylaxis polishing cup, as well as a conventional prophylaxis polishing paste [41]. They reported that the conventional prophylaxis pastes increased surface roughness and decreased the gloss of the composite resin and tooth enamel, while the paste-free cups did not significantly affect the surface roughness of the enamel or the restorative materials. According to these last acquisitions it would be interesting to perform a further analysis investigating whether the fluoridated tested polishing cups would affect the roughness and the gloss of the enamel and composite surfaces, as previously performed using other specific polishing systems [42].

The null hypothesis that fluoride-releasing rubber cup may improve enamel HA crystallinity was not rejected, suggesting that this polishing system allows to simultaneously polish the restored tooth surface and increase C of enamel HA, without using an additional prophylaxis paste, by quickly bonding the fluoride for stabilizing HA structure. Within the limits of the present study, which is an in vitro evaluation with a limited sample size, our findings provide the first demonstration that a fluoride-releasing rubber cup may chemically improve HA structure. Therefore, it can be suggested that the tested rubber cups are an effective way for clinicians to polish the teeth after restorative procedures, because they enhance enamel structure strength, being more advantageous, in term of caries prevention, than traditional non-fluoride releasing rubber cups. To better understand the mechanism of action of NaF related to the C of HA, it would be interesting to plan future investigations that will evaluate both in vitro and in vivo the exact amount of fluoride uptake by enamel.

The authors thank Professor Giorgio Tosi for his valuable contribution in drafting this manuscript and Alessandro Lorenzini for samples preparation.