This study was aimed at investigating the effects of Moringa oleifera leaf-meal (MOLM) on some haematological parameters of male albino rats. Sixteen (16) albino rats were randomly selected into four (4) groups; a control group (group A) and three experimental groups (groups B, group C and group D) containing four (4) animals per group. Group A was given normal diet, groups B, C and D were provided with MOLM diets containing 37.5 gm, 56 gm and 75 gm respectively. They were fed with water ad libitum daily for 21 days. At the end of the experimental period, haematological parameters (white blood cell count, packed cell volume, red blood cell count, haemoglobin count and differential white blood cells) were determined. The result showed significant differences (P<0.05) in hemoglobin count, red blood cells and packed cell volume in group B while there was a significant difference (p<0.05) in lymphocyte count of animals in group C and D, although all the groups were within normal range while no significant difference (P >0.05) was shown in the white blood cell count when compared to the control group. In conclusion, this study revealed that MOLM possesses nutritional benefits and this was indicated by its effects on RBC, PCV, haemoglobin and lymphocyte of the animals.

Plant materials as medicinal agents were mentioned in historical documents dating back many thousands of years Rasonavivo et al. [1] and from time immemorial, humans have remained dependent on plants for medicine. From a historical reports, it shows the evident that the fascination for plants as medicine is as old as mankind. Currently, medicinal plants were reported to be used against wide arrays of health problems which include cold, cough, stomach ache, cataract, constipation and many other ailments [2]. The plant Moringa oleifera as one of these plants was reported to prevent effectively, structural changes and oxidative damage in lens of rats by enhancing the activities of enzymatic anti-oxidants, reducing the level of lipid peroxidation and inhibiting the formation of free radicals or reactive oxygen species (ROS) [3].

In addition, hematological parameters (packed cell volume, white blood cell counts, differentiation of white blood cess, haemoglobin and platelets) were also reported to be positively affected by using this plant [4]. Moreover, Moringa oleifera was found to be of a nutritional value as it contains a number of essential vitamins like vitamins A, B complex (which include B1, B3, B6 and B7), C, D, E and K [5, 6]. However, it has been used for the treatment of high blood pressure, diarrhea, intestinal worms, colon inflammation, as a diuretic agent, skin antiseptic, Lowell [7] and to maintain blood glucose level in diabetic patients [4, 8]. Moreover, M. oleifera was used as antimicrobial agent, Caceres et al. [9] to treat ulcers, Pal and Sahib [10] and to enhance the immune systems against microbial and viral infections [8]. So far, most of the work on the effects of M. oleifera were conducted on the seeds of this plant. Thus the aim of this study is to investigate the effects of the leaves of this plant on some haematological parameters (white blood cell count, packed cell volume, red blood cell count, haemoglobin count and differential white blood cells) in albino rats.

The plant Moringa oleifera fresh leaves were obtained from the compound of a house at Oke-ijetu, Osogbo. The plant was identified and the harvested moringa leaves were air-dried under a shed to obtain Moringa oleifera leaf powder (MOLP) which was kept in a plastic rubber until needed. The Blanch diet and premix were purchased from Blessing feed mill at Niyi Ibikunle Osogbo Osun state. The Moringa oleifera powder was then mixed in different proportions per test group before administration to the animals.

A total of sixteen (16) male albino rats weighing 155.50-165.50 g were assigned into four groups per treatment. Allocation to groups was based on initial weight of the rats and group mean weight. Rats were acclimatized for a period of three weeks, afterwhich group A (Control) was given normal diet, B, C and D were provided with MOLM diets containing 37.5 gm, 56 gm and 75 gm respectively. They were fed with water ad libitum for 21 days.

In a moderate size wooden cage, four rats to a diet were housed together in a compartment in the cage. The rats were fed ad libitum maintained under normal temperature, humidity and light conditions. They were acclimatized for 21 days prior to administration of the Moringa oleifera leave meal. The experimental diets were offered in separate plastic feeders in the morning and evening (a total of 160 gm). The diets were offered daily and the feed leftover and/or wastage were weighed daily before feeding. Weights of all the animals were taken daily during the experiment. The rats were weighed one after the other, alongside with the left-over feed from each group with a weighing scale, daily at 7.00 a.m. for the 21-day period, and records kept daily.

NB: Allowances are made for losses due to milling or mixing which may be in form of dust particles.

At the end of the experiment, the rats were fasted overnight and sacrificed. Blood sample was collected via cardiac puncture after being dislocated at the cervical region, into heparinized sampling bottles. Samples were then stored in a refrigerator till when needed.

2.7.1 Erythrocyte Sedimentation Rate (ESR): A wintrobe tube was filled with blood sample and gently placed in an undisturbed place for 60 mins. The downward capillary of red blood cells in it was measured per hour as ESR.

2.7.2 Packed Cell Volume (PCV): A capillary tube was filled up with blood sample, about 75% of its length and centrifuged with a micro haematocrit centrifuge at 12,000 rpm for 5minutes.

2.7.3 Red blood cell count: 0.02 ml of blood sample was diluted with 4 ml of diluting fluid in a bijou bottle and mixed together. It was then placed counted in a counting chamber.

2.7.4 White blood cell (WBC): 0.05 ml of the blood was diluted with 0.95 ml of diluting fluid. A little portion was charged into a counting chamber to count the cells/cubic mm.

2.7.5 Haemoglobin (Hb): 0.02 ml of the blood sample was diluted with 4 ml Drabkin’s solution, mixed properly in a tube and allowed to stand for 5 mins for an observable full colour development.

2.7.6 White blood cell differential (WBC differential): Agranulocyte (lymphocytes and monocytes) and granulocytes and agranulocytes. Granulocytes (neutrophils, eosinophils and basophils). These were identified and counted after being stained with Giemsa stain. Numbers taken were recorded. 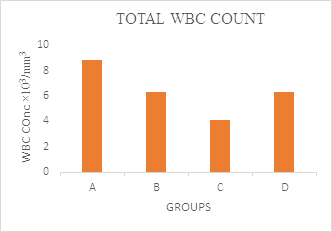 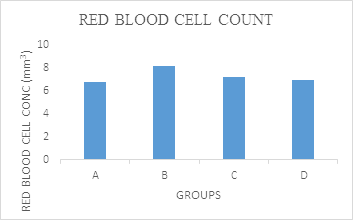 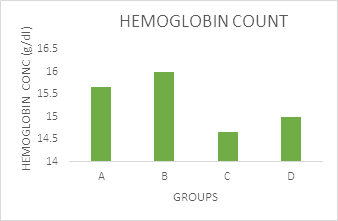 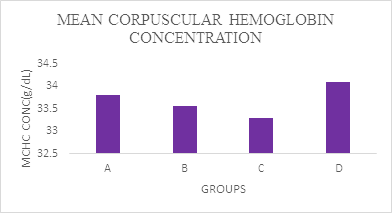 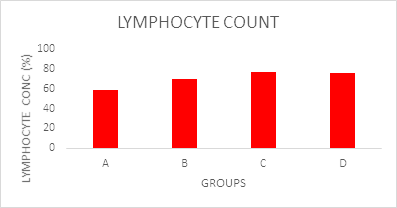 Results showed that M. oleifera caused a decrease in red blood cell (RBC) in all the groups to which it was administered. The result showed increase in hemoglobin (Hb) count in animals fed with 37.5 gm of M. oleifera only. The increase in Hb count could be that MOLM enhances blood production when consumed in small portions than large portions. This observation is in agreement with earlier work reported by Adedapo et al. [11] who reported an increase in Hb count among rats given 400 mg/kg body weight of M. oleifera leave than the quantities greater than 400 mg/kg b.w. Also, Otitoju et al in his study, in which the lowest 1mg/kg body weight quantitity of M. oleifera brought about the highest Hb count. Similarly, the result showed increase in PCV in animals feed with 37.5 gm of M. oleifera. This increase suggests that Moringa Oleifera leaves could promote blood formation in anaemic patients. This result suggests the local use of this plant as blood booster in anaemic patients.

However, the result showed a decrease in white blood cells in all the concentrations used, this may infer nutritional deficiency of vitamins B9 and B12, this observation is supported by work reported by Fahey [12] in which M. oleifera nutritional properties does not include the presence of vitamin B9 and B12. However mean values of all the groups which fed on graded levels of M. oleifera leave meal were within the range of 4 ×103/mm3 to 1 ×104/mm3.

Results showed that M. oleifera at 37.5 gm, 56.0 gm and 75.0 gm caused increase in the level of lymphocyte count in all the test groups. This observation showed the function of differential white blood cell (Lymphocyte) to defend against invading microorganisms. This study suggests that the consumption of M. oleifera leaves at small quantity seems better. Lymphocytes are produced naturally by the body system in response to any foreign substances in the body. In order to avoid induction of lymphocytes, minimum quantities which are sufficient to perform the nutritional and/or therapeutic function by which it is used for must be taken into consideration during consumption. It is recommended that further studies are conducted to be sure of the best or optimum levels at which the most health and metabolic benefits can be derived.

The results of this study thus support some investigations conducted on M. oleifera, that it possess medicinal effects on some nutritional diseases like anaemia [13]. This was indicated in this study by the effect of the MO on RBC, PCV, haemoglobin and lymphocyte of the albino rats. It also indicates the ability of M. oleifera to cause shedding of weight.

It is suggested that more research be carried out to investigate the synergistic effect of Moringa oleifera on haematological parameters especially using graded level to ascertain the exert dose healthy for consumption to promote desired performance characteristics.