We are reporting on an 11-month-old infant girl with two interesting findings. The first is dilated cardiomyopathy following an acute clinical course, which on presentation suggested acute myocarditis; two-dimensional echocardiographic findings showed severely-dilated left atrial and ventricular chambers as well as severe ventricular dysfunction. The second is the occurrence of right-sided middle cerebral artery stroke, with clinical manifestations of sudden onset left-sided hemiparalysis, secondary to right carotid artery occlusion. To the best of our knowledge, there is no previous report in the literature of this condition within a similar age group.

Acute myocarditis is a clinical entity that has no gender, age, or geographically-related preference. It is wide-ranging in severity, from asymptomatic to its fulminant form, with no distinct line of demarcation; this highlights its transition from acute to chronic dilated cardiomyopathy. Stroke is not an uncommon complication in children with dilated cardiomyopathy, prompting earlier diagnosis and prevention. Several studies done on myocarditis in a mouse model and human ex vivo have demonstrated that myocarditis is a hypercoagulable state due to an increase of tissue factor activity [1]. Stroke is defined as a sudden occlusion or rupture of cerebral arteries and veins, resulting in focal cerebral damage and neurological deficits. Stroke in children is relatively rare, with a reported incidence of 12 to 13 cases per 100,000 children; it is thought to be undiagnosed or misdiagnosed [2]. Imaging and autopsy studies in children with dilated cardiomyopathy have shown the presence of intraventricular thrombi that escaped earlier detection, acting as an embolic source to systemic circulation. Nontraumatic carotid artery occlusion is uncommon in children. The branch of the internal carotid artery most frequently susceptible to a showering of microemboli is the middle cerebral artery, leading to ischemic stroke or transient ischemic attacks.

An 11-month-old girl presented with shortness of breath and a perioral bluish discoloration. Two weeks prior to this presentation, she had flu-like symptoms, which were self-limiting. She had an uneventful perinatal history, with no delay in gross, fine motor speech, or social development. Handling the timeline of this case is described in Figure 1. 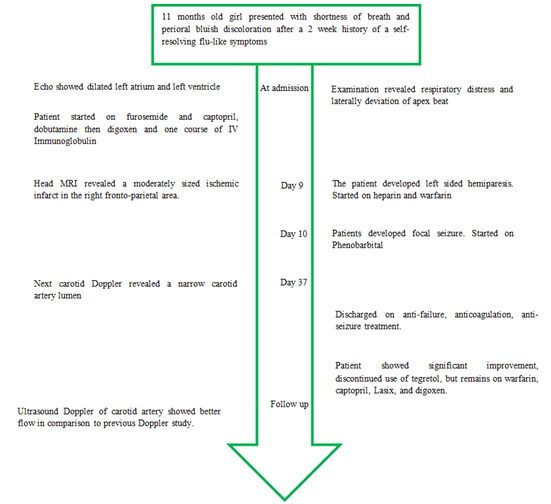 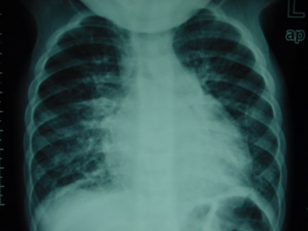 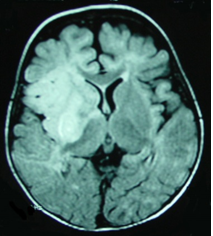 The patient was started on furosemide and captopril. Initially, dobutamine and digoxen were used as inotropic support; she was also given one course of IV immunoglobulin, and responded well. On the ninth day after admission, the patient developed weakness on the left side of her body. No bruit on neck examination. Head MRI revealed a moderately-sized ischemic infarct in the right frontoparietal area (Figure 3).

The patient was started on heparin, and was then put on warfarin. An ECG was repeated, but revealed no thrombus or signs of stasis in the left ventricular chamber, with the ejection fraction at 31%. Screening was done for sickle hemoglobinopathies and thrombophilia disorders (Functional Protein C and S Deficiency, Antithrombin III Deficiency, Antiphospholipid, Anticardiolipin, and Metabolic screen) were unremarkable. On the second day following hemiparesis, the patient developed focal seizures and was started on phenobarbital. Repeat neck magnetic resonance angiography (MRA) showed no change from previous results. Neck carotid doppler was done 28 days after the onset of paralysis, which showed a narrow carotid artery lumen with a sluggish flow. There was difficulty in reaching a therapeutic, international normalized ratio (INR). Phenobarbital was discontinued and replaced by carbamazepine (Tegretol). 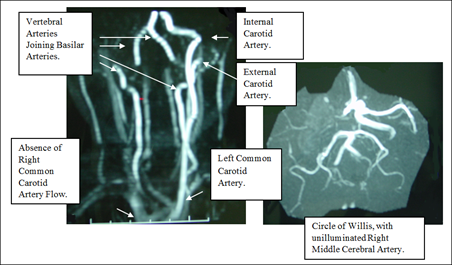 The patient remained on anticoagulation treatment for 29 days of her hospital stay. She was discharged on antifailure and anticoagulation treatment (warfarin) with improvement of her left-sided weakness, and her resolving heart failure. She continued with Tegretol as an anti-seizure treatment. On a follow-up visit 2 months later, the patient showed significant improvement. Her last ECG showed an increase in ejection fraction to 48% with FS at 29%. Left-sided hemiparesis also improved, with the patient able to walk independently, despite difficulty using her left hand (but with increased tone on the affected side). INR was 2.6 and MRA revealed signs of recanalization. Use of a Doppler ultrasound of the carotid artery showed better flow in comparison to a previous study. Patient discontinued use of Tegretol, but remains on warfarin, Captopril, Lasix, and digoxen.

Acute myocarditis is a clinical disorder which presents in children and adults as heart failure, and/or arrhythmia, with flu-like symptoms. Infectious agents, especially viral agents, represent 90% of its etiology. Absence of positive antibody titers may present. In this patient, she may have passed the acute viremic phase to the post-inflammatory dilated cardiomyopathy, along with severe myocardial dysfunction. Abe et al. conducted a study showing that 17 of 24 acute myocarditis patients had reduced LVEF, less than 60%, and 5 of these 17 patients did not recover [3]. McCrindle et al. found that despite the poor LV function and use of anticoagulants, children with dilated cardiomyopathy have a higher risk of developing thrombosis at any time during their clinical course [4]. Moreover, 13% of patients with dilated cardiomyopathy may develop embolic stroke [5]. The etiology of stroke in children is complicated, often without one risk factor as the cause. However, a probable cause of cerebral infarction was found in a study done in 10 countries, showing that risk factors in 493 children with stroke can be influenced by geography, ethnicity, age at presentation, and availability of medical resources. Cardiovascular disease was the common risk factor among different age groups [6]. Data shows that hours may elapse between the onset of symptoms of arterial occlusion and diagnosis of stroke. This delay in children likely reflects a lack of awareness of both physicians and families. Recognition of stroke in children has increased due to widespread use of noninvasive diagnostic studies, such as CT, MRI, MRA, and neonatal cranial ultrasound.

In adults, the common cause of carotid artery occlusion is atherosclerosis, while in children cardiac sources of an embolus occur more frequently. In the modern literature of “infantile hemiplegia,” most authors consider venous or sinus thrombosis to be the sole etiology, secondary to systemic infection, or dehydration. Carotid artery thrombosis is rarely reported in the absence of trauma or carotid artery dissection. In adults, approximately 30% of patients with carotid system ischemic stroke have a potential cardiac source of an embolus, with a third having carotid artery atherosclerosis [7]. Acquired or hereditary prothrombotic conditions must also be considered. Obstruction of the carotid artery can lead to turbulence and thrombus formation in blood flow, causing dissemination of thrombotic microemboli to the branch arteries of the carotid circulation. When Bogousslavsky and colleagues examined 380 adult patients with cortical middle-cerebral artery stroke, and varying degrees of carotid stenosis, 230 patients underwent cerebral angiography, while 112 showed occlusion of the middle cerebral artery.

There is no study indicating the prevalence of embolization in dilated cardiomyopathy, and controversy exists regarding the use of anticoagulation measures. Some authors now recommend anticoagulation measures for patients with severe ventricular dysfunction (with a shortening fraction <10%) as determined by ECG. In addition, no controlled prospective study about antithrombotic treatment in children is available. Warfarin has proven to be a long-term anticoagulant, thus it is most effective for prolonged anticoagulation, and can be used in children with reasonable safety. We faced difficulty in attaining therapeutic INR in our patient, who was receiving phenobarbital (a cytochrome P450-inducer) with warfarin. Currently, there are not enough reports about the maintenance of INR for epileptic children on barbital treatment. Urgent intravenous or intra-arterial thrombolysis with tissue plasminogen activator (within 6 hours of stroke onset) has been shown to be effective in an adult study, with dramatic improvement in some patients. Despite the ability to improve blood flow in distal arterial emboli, patients with severe carotid stenosis may still have residual stenosis. Carotid endarterectomy is the therapeutic modality of choice, under strict conditions. Patients with recent onset stroke, with large areas of brain infarct, or with major neurological deficits, have increased the potential of mortality due to hemorrhagic stroke following carotid endarterectomy. This necessitates a delay in treatment for 4 to 6 weeks, but may expose the patient to risk of a recurrent stroke. A study of 5 patients who underwent carotid endarterectomy within 48 hours of receiving tPA (intravenous, or intra-arterial) for ischemic stroke of the middle cerebral artery showed that all demonstrated marked improvement in the National Institute for Health Stroke Scale scores, with no complications post-surgery [8].

To our knowledge, there are only two reported cases similar to our own patient-both having dilated cardiomyopathy and then developing cerebral infarct. However, the main difference was the age group. One case was reported in Mumbai of an 11-year-old boy who developed neurological symptoms and was found to have idiopathic dilated cardiomyopathy and intracardiac clots, which contribute to ischemic stroke [9]. Similarly, another case reported in 2014 involved 67 Japanese patients who developed LV thrombi during treatment of heart failure, due to coagulability enhancement while using diuretics, and resulting in cerebral infraction [10]. Thus, this is the first case to be reported in infants.

In conclusion, we believe this patient suffered an ischemic stroke as a consequence of cardiac emboli, originating from a dilated left ventricle, and arising secondary to acute myocarditis. This led to carotid artery occlusion and microembolic occlusion of the right middle cerebral artery, in turn resulting in a large ischemic infarct and a major, sudden onset of neurological deficit in the infant. When dilated cardiomyopathy follows acute myocarditis, the prognosis may be better than with idiopathic dilated cardiomyopathy. However, this child already presented with depression of cardiac function, and onset of stroke further worsened the prognosis. Antifailure and anticoagulation medication are still the treatment of choice in this patient. Intermittent monitoring and observational follow-up have yet to be determined in her long-term outcome.

We wish you a very Happy and prosperous New Year! On this happy occasion submit your manuscript to our journal and share your knowledge.