Objective: Assessment of distribution of pulpitis in primary dentition on an individual and community scale.

Material and Methods: Subject of the study are 67 children with primary dentition and performed minimum one endodontic treatment of a deciduous tooth. Totally 37 girls and 30 boys are included into this research. Child‘s minimal age equals to four and maximum age of participants is six. The research has been carried out at the Faculty of Dental Medicine, Medical University “Prof. Dr. Paraskev Stoyanov”-Varna, in the period 2015-2017. The researchers are specialists at Pediatric Dentistry. Irreversible caries lesions with pulp involvement, categorized as D4, have been investigated through this retrospective study based on medical records of participants. Actual survey data processing package for mathematical and statistical analysis SPSS 20.0 was applied.

Results: Approximately half of all the children who have taken part in the research, namely 46, 30 %, are characterized with two endodontic treatment procedures performed. One clinical situation of endodontic therapy concerns 22, 40 % of all the participants. Maximum five teeth affected by pulpitis have been recorded per individual primary dentition.

The first half of the 20th century is marked by intensive development of the conception of the explicit necessity of endodontic treatment of teeth affected by complicated decay processes of pulpitis and periodontitis. There has been going on an incessant process of optimization of X-Ray image diagnostics’ methods, techniques of anesthesia administration and therapy approaches [1].  Since the year 1970 there has been a definite tendency of application of a variety of medicines, corresponding to the biological and physiological characteristics of teeth in norm, as well as to the pathological alteration of dental structures in conditions of pulp or periodontium inflammatory or traumatic disintegration [2].

It has been scientifically established that approximately 90% of the patients of child’s age, seeking for urgent dental cares, are affected by symptoms of pulp or periodontal diseases [3-4]. The high rate of these noxae correlates with the requirement Pediatric Dentistry specialists to be thoroughly acquainted with the frequency of occurrence and indications of treatment of pulpitis in primary teeth [5-6]. Timely performed diagnostics and efficient therapy have the potential to prevent progression of the disease, related to possible complications.

According to different criteria of classification are distinguished reversible and irreversible, acute and chronic pulpitis in primary teeth. Principally, acute pulpitis are differentiated to Pulpitis acuta serosa partialis, Pulpitis acuta serosa totalis. Purulent pulp inflammation concerns the diagnoses of Pulpitis acuta purulenta partialis and Pulpitis acuta purulenta totalis. As chronic processes of pulp inflammation are designated: Pulpitis chronica fibrosa, Pulpitis chronica ulcerosa, Pulpitis chronica granulomatosa. As a consequence of traumatic injuries of pulp there can be recorded clinical cases of Pulpitis traumatica post colisionem pulpae, Pulpitis traumatica post fracturae coronae dentis. The inflammatory process can easily penetrate through the coronal towards radicular pulp tissue, with impact upon formation of periodontal apparatus and functionality of growth zone of the tooth itself.

In the year 2000 Bender IB, conducted a profound study of pulpitis with accent on hysto-pathological traits and subjective complaints of pain. It has been established that in 80% of all the patients characterized with anamnestic data of pain in previous periods of time, there have been records of hystopathological alterations corresponding to chronic pulpitis. The establishment of partial necrosis of pulp excludes application of biological methods of treatment, related to definite indications of endodontic therapy or extraction of the primary tooth affected. In the rest 20% of all the examined patients there has been ascertained the diagnosis of reversible pulpitis [8]. Cho et al. have performed a 2-year long investigation with involvement of a total number of 100 primary molars, treated by the method of direct pulp capping. For a significantly high ratio of 93% of all of these teeth has been recorded a definite result of successful therapy [9-10].

The aim of our study is the assessment of distribution of pulpitis in the primary dentition on an individual and community scale.

Materials Subject of the study are 67 children. The number of girls included is 37 and boys amount to 30 representatives of the research. The average age of all the participants is 5.1 ± 0.8. Child‘s minimal age equals to 4, maximum age is 6.

The research has been carried out at the Faculty of Dental Medicine, Medical University-Varna, in the period 2015-2017, with the permission of the University Scientific Research Committee and informed consent signed by each parent. The selection of children concerns these with D4 clinical findings- dentinal lesion with pulp involvement.

The researchers are specialists at Pediatric Dentistry.

Data analyzed in this study are taken from ambulatory journals and patients’ medical cards. Only clinical cases with the diagnosis of D4, complicated carious lesions, namely pulpitis, are recorded. Non-carious lesions, areas of hypo-mineralization, carious findings of D1, D2 and D3, as well as periodontitis were excluded from the study. After processing the results and determining the highlights, the actual study was performed by processing the data with a mathematical-statistical processing package SPSS v 20.0. The statistical methods applied are analysis of description and graphics’ design. 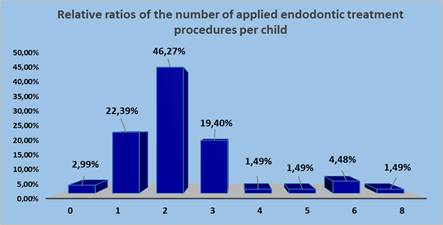 Figure 1: Relative ratios of the number of applied endodontic treatment procedures per child.

In the context of our investigation we have established that the average value of the frequency of pulpitis of primary teeth per child equals to 1, 55 ± 0, 93. The number of clinical findings of pulpitis varies from 0 to 8, concerning the age period between 4 and 6 years of age. The results obtained serve as ascertainment of the thesis that pulp inflammation is widely distributed in that age interval. The values definitely confirm the high frequency of caries complications in cases of postponed professional treatment provided by a specialist in the sphere of pediatric dentistry. The results commented are similar to those reported by Yohra et al [11].

Research performed by Rehana B et al. [7] differs from previous studies regarding the role of traumatic injuries as an etiological factor for pulp inflammatory processes. It has been concluded that traumas are not basic indication for endodontic treatment. Traumas are most often related to single clinical cases of emergency [7] and treatment [13] in children with primary dentition. According to other researchers the most frequent established clinical finding related to the need of endodontic therapy is pulp necrotic alteration. Banday N et al [12] represent and support the thesis that the most significant indication for endodontic treatment is irreversible pulpitis in child’s age [12].

The average value of the frequency of pulpitis equals to 1, 55 ± 0, 93 per child. The highest relative ratio of conducted endodontic therapy in primary dentition, regarding 46, 27% of all the participants included, amounts to 2 clinical cases of endodontic procedures. An average value of 2, 25 ± 1, 39 endodontic procedures have been registered by a child. Although there is a great variety of prophylactic procedures oriented towards control of tooth decay and its complications, the distribution of pulpitis has still been related to considerable consequences. There is a need to be formulated efficient preventive strategies in the context of health-related educational programs, addressed to dental medicine doctors. The aim is early performed diagnosis and treatment of dental carious lesions, resulting in reduction of the risk for pulp inflammation.

The authors declare that they have no conflict of interest. The current research is retrospective and based on medical documentary issues.