The aim of the present study was to explore hospital admissions due to heart failure in the cardiology department of a tertiary General Hospital in Athens, Greece, that does not hospitalize SARS-CoV-2 infected patients. The daily number of admissions at Cardiology Wards and Cardiology Intensive Care Unit were retrieved from hospital’s database (January 1st – April 30th, 2018, 2019 and 2020). The visits at the hospital were significantly reduced by 41.1% in March 2020 and by 32.7% in April 2020 as compared to January (p for linear trend <0·001). As the number of confirmed COVID-19 cases increased in Greece (i.e., from February 26th to April 2nd) the number of visits decreased (p=0.01), whereas, the opposite observed in the period afterwards (p=0.01). The number of admitted heart failure patients in March 2020 was the lowest compared to the entire period (n = 43 cases vs. 95%CI 53-92, p<0·001), whereas the number of those admitted in April was higher compared to March, but still lower compared to the entire studied period (n = 56 cases, p<0·001). However, although hospital admissions due to heart failure showed a declining trend following the overall admissions observed during the COVID-19 period, the percent of heart failure patients among all those admitted in March and April 2020 was 17% and 20%, respectively, and was higher compared to January and February of the same year, as well as the highest throughout the entire studied period 2018 – 2020 (range from 13% to 20%).

The recent Coronavirus Disease (COVID-19) pandemic has forced many countries to ensue various preventive measures, e.g., home-isolation, limiting and monitoring transportation, whereas, concerning the healthcare system and in order to focus on the management of COVID-19 patients, all elective procedures in hospitals were postponed, while, only the urgent ones were permitted which may provoked neglect of serious health conditions [1-3]. Thus, and in the era of the current COVID-19 outbreak, the aim of the present study was to explore trends in the admissions due to heart failure in the cardiology department and Intensive Care Unit (ICU) of a tertiary General Hospital, in Greece, that does not hospitalize SARS-CoV-2 infected patients, as locked down was imposed on March 2020.

The data of daily admissions to the Cardiology Ward, Heart Failure Unit and the ICU, as well as the number of daily visits in the outpatient Emergency Cardiology Department (ECD) of Hippokratio Hospital, a tertiary General Hospital, in Athens metropolitan area, Greece, were retrieved from hospital’s database. The aggregated data were for the period January 1st – April 30th, 2020 and the two previous years, i.e., 2018 and 2019. The study was carried out following bioethics and data protection requirements and received the permission of the Hospital’s Scientific Committee

The principle discharge diagnosis of interest was heart failure (ICD-10 I50; I42). Moreover, visits at the ECD were extracted by sex, age, presenting symptoms, initial diagnosis, and course (i.e., admission in the cardiology ward, referral to other specialty or discharge). The presenting symptoms of interest were: acute pulmonary edema (ICD-10:J81.0), peripheral edema (ICD-10:I60.9), and dyspnea (ICD-10:R06.0 J81.0),

Admissions and visits are presented as counts. Data were analyzed using Generalized Estimating Equations with loglinear Poisson link function. Additional explanatory variables were day-of-week (six “dummy” variables), holidays (binary variable indicating the dates that are official holidays) and Monday effect (binary variable indicating Monday as a day with a potentially larger number of hospital admissions). Goodness-of-fit of the estimated models was assessed by calculating the dispersion, whose optimum value is 1.0 for the Poisson regression, as well as from the q-q plot of the standardized deviance residuals. Linear-trend model was also estimated to evaluate differences in the count of visits between January and April of the three studied years separately (2018, 2019 and 2020); non-linear trends (i.e., parabolic and fractional polynomial) were also evaluated. Cross-correlation analysis was also applied between the time-series of COVID-19 confirmed cases and hospital admissions and visits at ECD from February 26th (the first confirmed case in Greece) to April 30th. All tested hypotheses were two-sided. All statistical analyses were carried out using the Stata SE 15 software (STATA Corp Ltd., Texas, USA). 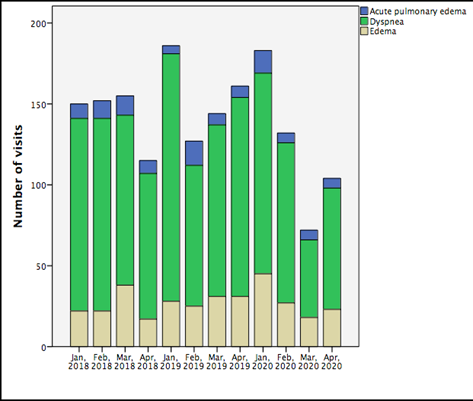 Figure 1: Pattern of the presenting symptoms among unscheduled visits in the Emergency Cardiology Department of a tertiary General Hospital, in Athens, Greece, during January 2018 – April 2020.

Admissions at Cardiology Ward and ICU due to Heart Failure

The number of patients admitted to the hospital’s Cardiology ward due to heart failure, during January – April 2018, 2019 and 2020 is presented in Figure 2 and Figure 3. As it can be seen, the number of admitted heart failure patients in March 2020 was the lowest compared to the entire period (n = 43 cases vs. 95%CI 53-92, p<0·001), whereas the number of those admitted in April was higher compared to March, but still lower compared to the entire studied period (n = 56 cases, p<0·001). At this point it should be mentioned that the first confirmed COVID-19 case in Greece was reported on February 26th and there was a progressive increase until April 2nd (published reports at www.eody.gov.gr). No differences were observed for the entire three-year period as regards the mean age (mean (SD) 68·1(1·0) years, p=0·07) and the sex (66·9% men, p=0·53) of the admitted patients. However, although hospital admissions due to heart failure showed a declining trend following the overall admissions observed during the COVID-19 period, the percent of heart failure patients among all those admitted in March and April 2020 was 17% and 20%, respectively, and was higher compared to January and February of the same year, as well as the highest throughout the studied period 2018 – 2020 (range from 13% to 20%) (Figure 2). Regarding the duration of hospitalization, no differences were observed between March, April 2020 (4.8±4.3 days, 4.4±4.3 days, respectively) as compared to the entire 2018-2020 period (range 3.6 to 5.3 days, p=0·77). 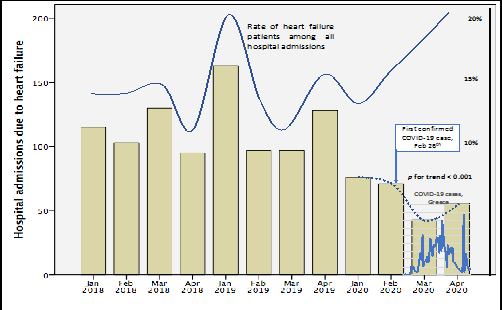 Figure 2: Hospital admissions due to heart failure (HF) in the Cardiology Ward and the ICU of a tertiary General Hospital, in Athens, Greece, during January 2018 – April 2020 (p-value derived from linear trend analysis, dotted line derived from fractional polynomials); time-series line (bottom right) represent the confirmed COVID-19 cases in Greece, from February 26th to April 30th, 2020 (note: the peak observed on April 21st is due to a series of cases observed in a refugee/immigrants campus). 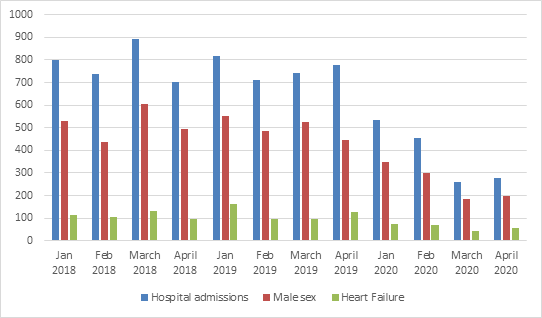 Figure 3: Total and due to heart failure hospital admissions in the Cardiology Clinic during the first four months of 2018, 2019, 2020.

It is hard to explain the mystery of the “missing” visits of urgent clinical situations, like decompensated heart failure. On explanation could be that the rigorous public health measures led people with chronic diseases, like heart failure, to sustain in social isolation, abstinence from a stressful job-related environment, better adherence to cardiovascular medications  and nutrition advices, adopting healthier life-style habits. Especially for the impact of stress, the role of the imposed quarantine on the immediate psychological consequences has been evaluated during the H1N1 2009 outbreak in a providence in China, where no significant increase in stressful experiences were observed during the quarantine period. [4, 5]. Additionally, healthier nutritional habits – that people stayed at home may have followed - have shown beneficial effects on bi-ventricular function in heart failure patients, so life-style modification during COVID-19 social isolation could have played an important role in the progression of heart failure and the maintenance of patients in compensated status [6].

Although the use of tele-health and e-health technologies can offer real-time interactive telehealth interactions between patients, promoting adherence in medication and healthier life-style habits, that result in reducing hospitalizations in heart failure patients, this was not applicable in this case as those programs are not in wide spread  use in Greece [7]. Heart failure has also observed in about 23% of patients with COVID-19 infection and has been related with poor survival [8]. It is unclear if heart failure is due to decompensation of pre-existing left ventricular dysfunction or new cardiomyopathy. Thus, decompensated heart failure cases infected with coronavirus could have been classified as COVID-19 cases, leading to under-presentation of cases in the Emergency Department. Additionally, symptoms of dyspnea may have been attributed to a possible viral infection and patients stayed home, according to the instructions given by the Government. It is apparent that people are afraid to be exposed to the virous, as even in non-COVID-19 hospitals, the demand for medical consultation was reduced Even, though, an exaggeration in the heart failure events was noticed few weeks later, on April, which means that patients could not tolerate symptoms any more. This is also supported by our observation that the number of people visited the ECD and then admitted to the cardiology ward, increased in April, when the epidemic curve was flattened. Similar observations are presented in a recent report from a retrospective analysis of claims data of 66 Helios hospitals in Germany [8]. In this study consecutive patients with an emergency hospital admission between March and April 2020 (study period), March and April  2019 (previous year control) and January and February 2020 (same year control) were studied. It seems that emergency admissions declined during Covid-19 outbreak by 22 – 28 % for heart failure and 13 – 27 % for cardiac arrhythmias. This was also accompanied by a 15 – 27 % reduction in interventional treatments.

The extent to which a community outbreak of an infectious disease, like COVID-19, influence people’s behavior towards health issues, is largely unknown. Long-term studies would enlighten health aspects during pandemic and long-term after stabilization.