Inadequate feeding of 0-2 years children have long been observed in our society and it is one of the global problems causing malnutrition worldwide. The study was cross sectional in design. It was conducted among consenting mothers and caregivers with 504 children 0-24 months in two local government areas (LGA) in Ekiti State, Southwest Nigeria. Respondents were selected using simple random sampling technique. Data was collected on assessment of Infant and young child feeding practice using semi-structured, interviewer administered questionnaires to obtain information on demographic characteristics, breastfeeding practices and complementary feeding practices. Data was analyzed using descriptive statistics. Analysis of categorical data between the two groups was performed with Chi-square of Fisher’s exact test. The p-values <0.05 was considered statistically significant. Statistical package for social sciences (SPSS) version 20 was used for the analysis. All the 504 children 0-24 months assessed were breastfed, 216 (42.9%) initiated breastfeeding within one hour after birth, 138 (27.4%); 78 (28.3%) in Ijero and 60 (26.3%) in Ikole LGAs infants were exclusively breastfed and only 154 (30.6%) were breastfed exclusively for a duration of 5-6 months. Of the 347 children 6-24 months, 124 (35.7%); 79 (40.7%) in Ijero and 45 (29.4%) in Ikole LGAs were fed on appropriate complementary food and 241 (69.5%) initiated complementary feeding at the age of 6 months. Infant and young child feeding (IYCF) practice was poor in this study. Therefore, it is important to strengthen the promotion on IYCF practice during child welfare clinics and via mass media.

Poor feeding practices during the first two years of life have both immediate and long-term consequences. It is estimated that improper feeding of children leads to about one-third of the cases of malnutrition worldwide [1]. Ensuring health, growth and development of children requires adequate nutrition during infancy and early childhood [2]. Therefore, optimal feeding during the first two years of life provides opportunity for prevention of growth faltering and under-nutrition [2]. Hence, Improvement of infant feeding practices for children less than two years should be a high priority globally [3]. A global strategy for optimal infant and young child feeding (IYCF) was set up by World Health Organization (WHO) and United Nations Children’s Fund (UNICEF) [2] in order to reduce malnutrition among the children. The strategy ecommends early initiation of breastfeeding within one hour of birth, exclusive breastfeeding for the first six months, and introduction of appropriate, adequate, and safe complementary foods along with continuing breastfeeding up to two years and beyond. Improving infant and young child feeding practices is important to reduce under-nutrition and its consequences [4].

Breastfeeding and complementary feeding practices can prevent up to 19% of all childhood deaths in low-income countries if adequately promoted and practiced [5]. However, questions arise about the level at which current recommendations are implemented. In Uganda and some other countries in Africa, high use of pre-lacteals (fluids given before initiating breastfeeding at birth) and poor exclusive breastfeeding practices has been reported. (6) It is estimated that fewer than 50% of children under 6 months of age are exclusively breastfed in low-income countries, where the relative benefits of optimal feeding are greatest [6]. In Nigeria, an estimated 2,300 children less than five years lose their lives daily, in which sub-optimal IYCF practices play a major role, despite a range of policy initiatives to improve (IYCF) practices [7]. It has been reported that Inappropriate IYCF practices account for more than 40,000 disability-adjusted life years in Nigeria by contributing to lost productivity among children under 5 years [7]. The national study in Nigeria revealed that early initiation of breastfeeding significantly decreased by 4.3% between 1999 and 2013 while exclusive breastfeeding remained unchanged. It also showed that predominant breastfeeding significantly increased by 13.1%, and children ever breastfed declined by 16.4% over time.

Previous reports have shown that non practice of exclusive breastfeeding is a risk factor for a number of diseases, including diarrhea and upper respiratory infections [7]. Feeding practices during infancy are critical for the growth and health of a child during the first two years of life [8] and of importance for the early prevention of chronic degenerative diseases. Progress in improving IYCF in the developing world has been reported to be remarkably slow [9] due to several factors. The risks of early childhood survival in Nigeria are to be considered. A newborn Nigerian baby has a 30 times higher chance of dying before the age of 5 years than a baby born in the developed, industrialized countries [9].The report of a research showed that the regional prevalence of diarrhea, under-nutrition and under five mortality in Nigeria are far more prevalent in the northern than in the southern part of Nigeria [10]. There is the need to focus attention on the promotion of feeding practices at the household level that are beneficial to the survival of children and caregivers in Nigeria. The above studies indicate the need for a comprehensive strategic plan that is achievable to improve IYCF practices in Nigeria, and to build on previous policy initiatives of past years. Therefore, this study was conducted to assess current status of infant and young child feeding practices as reported by mothers and caregivers in two local government areas, Ekiti State, Southwest Nigeria.

A cross-sectional study (community based) was conducted among mothers or caregivers who had children aged between 0 and 24 months.

Data were collected using semi-structured, interviewer administered questionnaires which were administered with the help of trained research assistants. The questionnaire solicited information on demographic characteristics, breastfeeding initiation, exclusive breastfeeding and duration, complementary feeding, age of introduction and difficulties in introduction. The questionnaire was developed in English and translated to Yoruba language for better understanding of the respondents. An interview with mothers of the index child was conducted at their home ensuring privacy. Ten Nutritionists were recruited as data collectors. In a study, the feeding practice indicators developed by WHO was used to assess Infant and young child feeding practices [4, 11]. Optimal feeding practice was assessed based on compliance to WHO recommended practices for each indicator in this study. Complementary feeding practice was assessed based on timely initiation (introduction of complementary food at six months), minimum meal frequency (minimum of three meals/day and four times/day for children aged 6-8 months and 9 months and above respectively) and minimum meal diversity (four or more foods within 24 hours). Complementary feeding practice was considered appropriate if all the three indicators mentioned above were fulfilled otherwise it was considered as inappropriate [4, 11].

The data collected was analyzed using statistical package for social sciences (SPSS) (Version 20) and expressed in frequency and percentages. Analysis of categorical data between the two groups was performed with Chi-square of Fisher’s exact test. The results were represented in tables and charts. The p-values <0.05 was considered statistically significant. P-values (P<0.05) and 95% confidence intervals were used to present results of the bivariate analysis. The study was authorized by the Ekiti State Primary health care development agency. Informed consent was taken from participants. Privacy and confidentiality were maintained throughout the study period by excluding personal identifiers during data collection. 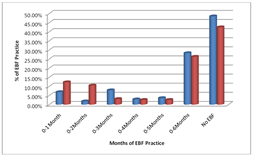 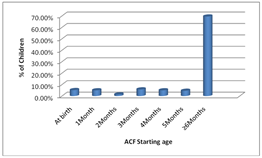 This community based cross-sectional study reveals a low prevalence of exclusive breastfeeding (27.4%) in Ekiti State, Southwest Nigeria; significantly lower in Ikole local government area (26.3%) than Ijero LGA (28.3%). This finding is lower than the prevalence among a group of rural area of Sokoto (78.7%) Northern Nigeria, [12] 82% in another study in Lagos Nigeria, [13] a previous study which showed that the prevalence of exclusive breastfeeding practice in Ethiopia was (84%), [2] and previous reports in Nigeria that showed Exclusive Breastfeeding rate declined from 64.9% at birth to 37.3% at 24 weeks of age [1] but higher than a report from Ile-Ife, one of the southwest town which showed that a low proportion (19%) of the nursing mothers practiced EBF. This means that the practice varies widely across Nigeria even among the same tribe [14].

4.2 Early initiation of breastfeeding by LGA

Poor nutritional status has been found to be significantly associated with the introduction of complimentary feeding before age six months [21]. It was reported that early weaning was a cause of anaemia in the first year of life [21]. Another study illustrated that, the coverage of timely introduction of complementary feeding was 61.8% [22]. In the same study, a proportion of the mothers (48.3%) started a timely complementary food for their infants at 5 to 6 months while 18.3% commenced Complementary food to their infants at above 6 months. The study revealed that late commencement of complementary feeding affects the nutritional status of the infant [22]. In this study, 35.7% of the children took minimum adequate food at 6-24 months. This was higher than the report of a study which reveals that the practice of appropriate complementary feeding was only 20 (7%) [2]. The same study showed that 39 (97.5%) of 40 mothers introduced complementary food timely, 131 (47%) of mothers gave their children minimum meal frequency, and 20 (7%) children were given the minimum food diversity and acceptable diet [2]. In another study about 67.7%, 52.6%, and 32.7% of children aged 6-8, 9-11, and 12-23 months were fed with the minimum acceptable and age appropriate meal frequency, respectively. The proportion of children that had good dietary diversity was 23.7% [22].

Difficulty in introducing appropriate complementary food at 6 months was 28.9% in this study. It was significantly higher in ijero LGA than Ikole LGA. Transition from exclusive breastfeeding to complementary feeding used to be a challenge to many infants. Every infant is born with specific taste preferences and aversions; however, they must be encouraged to take minimum food diversity that will enhance adequate diet. Knowing well that different cultures have a wide range of food stuffs, children should be encouraged to learn how to like and accept the available foods in their environment [23]. Most often, children learn to accept sweets and high energy density foods which are easily consumed and good sources of energy [24]. At a stage of development called neophobic stage (whose peak is age 20 months) children show extreme new food refusal [23]. This stage differs from one child to another and fades away by age of 5 to 8 years [25]. There is therefore an interaction between unacceptability of tastes, textures and new foods by children and the effect of early exposure to new tastes and textures [23].

This study has demonstrated a sub optimal infant feeding practices in our environment, through poor breastfeeding practices in terms of early initiation of breastfeeding, six months of exclusive breastfeeding and inadequate complementary feeding, which could have a significant effect on infant and young child survival, growth and development, nutritional status, morbidity and mortality and impend economic development. To achieve optimal growth, development and health, infants should be breastfed exclusively for the first six months of life. Thereafter, infants should receive adequate complementary foods with continued breastfeeding up to age two years or beyond, to meet their nutritional needs. Considering the findings of this study, counselling on the benefits of optimal infant feeding such as; early initiation of breastfeeding within one hour after delivery, exclusive breastfeeding practices for the first six months, breastfeeding up to age 2 years and timely introduction of complementary feeding at 6 months of age should be intensified. Strategies to overcome difficulties in ACF introduction should be made known to the public.

Limitations of the Experimental Methods

We acknowledge the Health Research Board; Ekiti State primary health care development agency who approved this research, Unicef Nigeria who funded this project, research assistants and the respondents who consented to participate in the research. 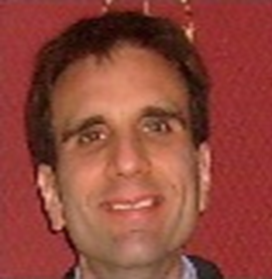