Is There Relationship Between Thyroid Volume, Hyperparathyroidism and Cardiovascular Risk Factors in Patients Under Hemodialysis?

Background: Thyroid dysfunction and hyperparathyroidism are common in with chronic kidney disease (CKD) and under dialysis. It is known that they increase the risk of cardiovascular (CV) diseases in this population.

Chronic kidney disease (CKD) is a worldwide public health problem with poor results and increasing incidence. It progresses with reduced glomerular filtration rate (GFR) and affects 10-20% of adults worldwide [1]. In patients with end-stage renal disease (ESRD), as renal replacement therapy (RRT) modalities; kidney transplantation, hemodialysis (HD) and peritoneal dialysis (PD) are among the current options [2]. Thyroid dysfunction is common in patients with CKD and under RRT [3]. While low free T3 hormone levels were associated with arterial stiffness in PD patients, high TSH levels near the upper limit of normal range were found to be associated with low subendocardial viability rate (arterial stiffness indicator) in euthyroid PD patients [4]. A positive correlation was observed between thyroid volume and creatinine levels in kidney transplant cases [5]. In recent years, factors such as uric acid (UA), hypoalbuminemia, insulin resistance, dyslipidemia, inflammation, oxidative stress and hyperparathyroidism (HPTH) have been frequently used and used as risk factors for the development of cardiovascular diseases (CVD) in patients with ESRD [6]. It is known that secondary HPTH, the most common cause of which is CKD, causes fractures, decreased quality of life and increased risk of CVD [7].

In this study, it was aimed to investigate the relationship between thyroid gland volume, HPTH and atherogenic index of plasma (AIP) and carotis intima-media thickness (CIMT) in the patient population undergoing RRT, and to evaluate the relation between these parameters, each of which is an independent cardiovascular (CV) risk factor.

This single-center, prospective study was carried out with the approval of the local ethics committee (Erzincan University Ethics Committee; 07-04-2015/ 64593235-050.01.04-E.14331) and informed consent from the participants. The study included 50 ESRD patients without thyroid dysfunction who were followed by our clinic and under HD treatment. Informed consent forms were signed, thyroid volumes and carotis intima media thicknesses of the patients were measured by ultrasound. Biochemical parameters of patients included in the study for the last 6 months were obtained from medical records. Patients under HD treatment due to ESRD divided into three groups as; low (<13.6 pg/mL), target (13.6-61.2 pg/mL) and high (> 61.2 pg/mL) PTH levels. Patients were also evaluated according to low uric acid and high uric acid levels and low Kt/V and high Kt/V ratios. In addition to the routine laboratory examinations of the patients in the study, laboratory parameters such as parathyroid hormone (PTH), lipid profile, high sensitive CRP, TSH, T4, T3, glucose, UA, insulin, C-peptide, and AIP and also thyroid ultrasonography performed simultaneously by the same Endocrinologist and carotid intima media thickness, which is an indicator of atherosclerosis, was evaluated and recorded.

Table 2: Volume of thyroid glands in females, males and all cases. 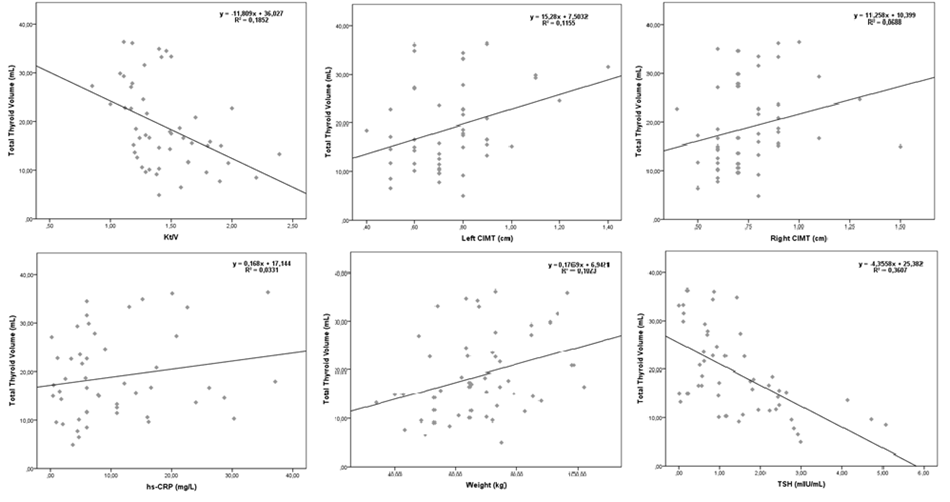 The increased frequency of thyroid dysfunction in CKD patients and the increase of thyroid gland volume has been demonstrated with previous studies [3]. In a previous study on healthy adult Turkish population, thyroid volume of males was 14:53 ± 2.55 ml and 12.9 ± 2:05 ml in females, and in all study group was determined as 12.98 ± 2.53 ml and these values are especially recommended as a reference value for Turkey's south-eastern regions [8]. In our study; we found total thyroid volume as 21.64 ± 1.83 mL in men, 15.01 ± 1.60 mL in women and 19.52 ± 1.41 mL in the whole group. We also found that in our HD patient population, thyroid volume increased as serum PTH level increased.

Thyroid diseases are common in CKD. It was found that morphological, functional and autoimmune thyroid diseases are more common in patients with hemoglobin levels below 125 g/ dL in CKD patients under HD treatment [3]. It was found that the average thyroid volume increased in HD patients. There was no significant relationship between the history of HD and thyroid volume. The most common thyroid pathologies in the HD patient population were diffuse and multinodular goiter. In the same patient group, a positive correlation was found between TSH levels and thyroid volume [9]. While low free T3 hormone levels were associated with arterial stiffness in PD patients, high TSH levels near the upper limit of normal range were found to be associated with low subendocardial viability rate in euthyroid PD patients [4].

In a study evaluating 143 patients in Japan, 14% of patients under HD had goiter (thyroid volume > 20 ml), and 59.4% of them, especially in women, had nodular lesions in the thyroid gland [10]. Thyroid hormones have been reported to be effective on kidney function. For this purpose, thyroid hormone and thiamazol, an antithyroid agent, were applied to the rats with renal failure. At the end of 22 weeks, the survival rate was 100% in the tiamazol group, while it was 62.5% in the group given thyroid hormone. Thyroid hormone aggravated tubular changes and interstitial volume increase triggered by adriamycin [11].

Cardiovascular diseases are the main cause of morbidity and mortality in ESRD patients. When this patient group is evaluated in terms of CV risk factors; in addition to traditional risk factors, we encounter factors such as bone and mineral metabolism disorders, chronic inflammation, oxidative stress and hyperuricemia [12]. High PTH levels are blamed for the etiology of vascular calcification. Increased PTH acts as a uremic toxin; contributes to bone loss, vascular and cardiac valve calcification, anemia, cardiomyopathy, hypertension and glucose intolerance [13]. In studies conducted in the general population, HPTH has been shown to be associated with CV disease [14]. In CKD patients, some studies have shown that there is a higher risk of death due to CVD with increased PTH levels [15], while others have reported that low PTH is associated with a greater risk for CVD [16].

In our study; when groups were seperated as low (< 13.6 pg/mL), target (13.6-61.2 pg/mL) and high (> 61.2 pg/mL) PTH levels continuing for at least 6 months; cardiovascular risk factors such as AIP, hs-CRP, uric acid, bilateral CIMT were all lower in low PTH group in comparison with other groups. Serum UA level has been defined as an independent risk factor for future cardiovascular mortality in the general population [17]. In the literature, there are contradictory data about the role of UA in ESRD patients and its relationship with cardiovascular events, and some studies have found high UA levels [18], and some other studies associated low UA levels with cardiovascular events [19].

In our study group; when groups were seperated as low (<7 mg/dL) and high ((> 7 mg/dL) uric acid levels continuing for at least 3 months; , hs-CRP levels were also high in low uric acid group. When our patient groups were seperated as low (<1.2) and high (> 1.2) Kt/V levels for at least 1 year; total thyroid volume (p<0.001), bilateral CIMT (p<0.001) and total cholesterol levels (p=0.002) were all higher in low Kt/V group than high group as suggesting that adequate dialysis is also important in order to reduce cardiovascular risks.

In HD patients; thyroid volume, hyperparathyroidism, uric acid and atherogenic index of plasma may be an indicator of CV risk in harmony with other risk factors. Clinicians should evaluate these parameters during their clinical practices.

All authors contributed to designing the project, data collection, and interpretation, literature review, and gave the final evaluation.