Thalassemia is prevalent in Southern China and pregnancy with thalassemia becomes not rare in this area. Due to the unique pathophysiologic mechanism, pregnant complications in beta thalassemia are more complicated than normal pregnancy, such as hypercoagulation state, infant intrauterine growth restriction, impaired heart function and anemia. Despite of these, the clinical outcome of beta thalassemia pregnancy has been reported better currently. In this article, we report one interesting and distinct case of beta thalassemia pregnancy with complicated anemia. A pregnant woman, with beta thalassemia intermedia and underlying megaloblastic anemia, suffers the complex autoimmune hemolytic anemia after delivery. Screening for antibodies identifies two alloantibodies, anti-E IgG and anti-Lea IgM antibodies, which both contribute to the autoimmune hemolytic anemia. Glucocorticoid combined with immunoglobin has a good response and warm blood transfusion is also important in the treatment.

Thalassemia is one of the most common hereditary hemoglobinopathies, which nearly affects 5 percent of the world’s population. In Southern China, the carrier rate of beta thalassemia is about 1.9% [1]. Over 20 β-thalassemia mutations have been identified in Chinese population. Four mutations, [CD41-42 (-4 bp), IVS-2-654C→T, CD17A→T, and -28A→G], account for approximately 90% of the disease [2]. Three subtypes of beta thalassemia have been classified with clinical phenotype and genotype: transfusion-dependent (major), non-transfusion-dependent (intermedia) and minor. High rate of successful pregnancy in individuals with thalassemia minor and intermedia has been observed, moreover good pregnancy outcomes have been seen in beta thalassemia major cases [3-5]. Autoimmune hemolytic anemia (AIHA) is due to the presence of antibodies that react with protein antigens on the red blood cell (RBC) surface. The causes of AIHA are associated with many factors, but prior allogeneic blood transfusion is one of the most important factors in thalassemia pregnant patients [6]. Approximately 1.5 to 2.5 percent of pregnancies with alloantibodies are non-Rh(D) red blood cell (RBC) antibodies, which rarely cross the placenta, causing hemolytic disease of the fetus and newborn (HDFN) [7]. In this article we reported a case that a pregnant woman, who had beta thalassemia intermedia and megaloblastic anemia, suffered AIHA after delivery due to multiple alloantibodies and had a good response to the treatment of glucocorticoid and immunoglobulin.

A 27-year-old Chinese gravida 3 para 0 woman from Fujian province, who had family history of anemia and no history of transfusion, first had been diagnosed anemia at 22 weeks of pregnancy with hemoglobin (Hb) 78 g/L. During her 36 weeks’ pregnancy, her Hb level had once dropped to 50 g/L and she had been transfused with 2 units (U) of leukocyte-reduced red blood cells. At 38+1 weeks of pregnancy, she came to the hospital with the complaint of abdominal pain. Her vital sign was stable and physical examination showed pallor skin, splenomegaly, no hepatomegaly, no jaundice, and others were unremarkable. Complete blood count showed severe anemia (Hb 51 g/L) with decreased mean corpuscular volume (76.7 fl), mean corpuscular hemoglobin (22.5 pg) and mean corpuscular hemoglobin concentration (293 g/L). Peripheral blood smear indicated uneven size of erythrocytes, with teardrop-shaped, irregular and immature erythrocytes. Nutrition tests showed low serum VitB12 (cobalamin), low folate and normal ferritin. Total and unconjugated bilirubin levels were slightly increased (25 μmol/L and 23.1 μmol/L, respectively). Direct and indirect coomb’s test (DCT, ICT) were negative. Coagulation tests were within normal limits. The blood group of the patient was O Rh(D+). She received 6U red blood suspension (RBS) transfusion, and gave birth to a healthy baby girl by caesarean section on the next day.

Considering the family history that the patient’s sister had undergone splenectomy for splenomegaly, we suspected the woman had hereditary hemoglobinopathy and analyzed her hemoglobin by high performance liquid chromatography (HPLC). The result was positive, showing a significant increase in HBF (49% HBF, 50.5% HBA and 0.5% HBA2). Other hemolysis test was negative: glucose?6?phosphate dehydrogenase (G6PD) activities, pyruvate kinase (PK) activities and Heinz-body forming test. Bone marrow aspiration showed that Gaucher’s cells were found in her bone marrow smear. Then, the specific test was performed by reverse dot-blot hybridization to detect thalassemia-associated mutations. The result showed the woman carried a heterozygous mutation of the beta-thalassemia gene CD41-42(-4 bp). Moreover, the patient’s level of VitB12 and folate was low. Above all, we gave the diagnosis as beta thalassemia intermedia with megaloblastic anemia. Oral folic acid and parenteral VitB12 were given.

On the fifth day after the operation, the woman developed a fever with a maximum body temperature of 39.0°C (102°F) and accompanied by dark urine. Her Hb decreased to 31 g/L and reticulocytes increased (5%). Total and unconjugated bilirubin increased significantly (58.9 μmol/L and 51.9 μmol/L, respectively). LDH is higher than upper limit. DCT was positive (C3 positive and IgG negative). ICT was negative. She was received 3U washed red blood cells (WRBC) and 8U specially cross-matched red blood cells (RBC) transfusion, but it did not improve and her Hb was still around 30 g/L. Antibody screen and identification showed that there were anti-E IgG antibody and cold agglutinin antibodies (anti-Lea IgM antibody) in the serum. Her RBC haplotype was finally confirmed to be O Rh (CCD ee) Leb. The diagnosis of mixed autoimmune hemolytic anemia was certain. Due to the complex antibodies caused autoimmune hemolytic anemia, the patient was given the treatment with methylprednisolone (1 mg/kg) for 15 days and subsequent dosing slowly. She was also received immunoglobulin at dose of 0.4 mg/kg daily for 5 days followed by 0.2 mg/kg daily for 5 days. In transfusion, she received specially cross-matched RBC, which had been warmed appropriately prior to and during transfusion. The patient’s Hb increased and stabilized above 60 g/L. Then she was discharged and followed up. One year later, her Hb increased and remained around 90 g/L. 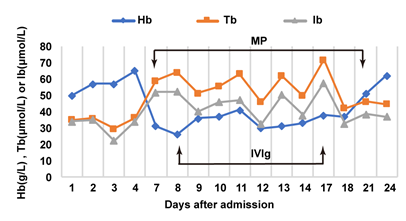 Since thalassemia pregnancy (mainly thalassemia intermedia) was first observed in the mid-1960s, in the past few decades many reports have focused on the outcomes of thalassemia pregnant women in different regions [3-5, 8, 9]. In Lebanon and Italy, a total of 48 pregnant women with thalassemia have a live birth rate of 93% and a spontaneous abortion rate of 7% [9]. In the United Kingdom and North America, over 70% of pregnancies resulted in live births and 73/83 (88%) of live births occurred at full term [4]. Pregnancy in women with thalassemia appears to have no adverse effects on the progression of the disease, but are associated with high rate of thrombotic events, including placental thrombosis and deep vein thrombosis, as well as high rate of intrauterine growth restriction (IUGR) [5, 9, 10].

This case explores a complicated anemia in a thalassemia pregnant woman. Firstly, the patient has beta thalassemia intermedia, confirmed by the gene test result and there is no transfusion history before pregnancy. Due to the increasing demand nutrition and metabolism during pregnancy, her anemia is exacerbating and megaloblastic anemia occurs with the low VitB12 and folic acid level. After delivery, she has met a more challenging problem: AIHA. There are two alloantibodies in her serum, both are non-RH(D) RBC antibody: anti-E IgG antibody and cold agglutinin antibodies (anti-Lea IgM antibody), which would cause mixed AIHA (both warm and cold). Anti-E IgG antibody is one of the antibodies against Rh complex on the normal red cell membrane and can easily deposite to initiate complement activation causing AIHA [11]. The anti Leb IgM antibody is one of the Lewis antibodies, which are usually IgM and appear in pregnancy and postpartum [12]. In cold temperature, the antibody is easily agglutinated and cause hemolytic events. So prior to transfusion, the blood (and any co-administered solutions) should be warmed appropriately (typically, using a blood warmer to raise it to body temperature), but not exceed 40°C (104°F) causing thermal hemolysis [13].

Our treatment strategy is the combination of corticosteroids and immunoglobulins. Glucocorticoids are the most common medication used in the treatment of AIHA, by which nearly 80% patients could achieve an initial clinical response. Intravenous immune globulin (IVIG) is only occasionally effective in the treatment of AIHA refractory to conventional therapy with prednisone and splenectomy; it can also be used as part of the initial regimen to establish control of patients in very severe status. If the patient is refractory, rituximab is also an alternative option of treatments. High efficiency of rituximab has been seen in resistant or refractory AIHA, with response rates similar to splenectomy (∼70%). Rituximab combined with steroids is also an optional treatment [14]. In patient with thalassemia intermedia (TI), blood transfusion therapy is currently not a routine treatment. TI during pregnancy is confused with physiological anemia. Pregnancy is usually characterized by hemodynamic and cardiovascular changes, which are caused by increased total circulation volume and subsequent blood dilution. Transfusion therapy in anemic pregnant cases does reduce the risk of IUGR and other complications. Data from non-thalassemia populations indicate that hemoglobin above 10 g/dl during pregnancy is the best recommendation for fetal growth and prevention of preterm birth [15].

Patients with TI have a higher risk of thrombosis than the general population. One study shows that 30% of patients with TI had venous thromboembolism after 10 years of follow-up, suggesting a chronic hypercoagulable state [16]. Impaired cardiovascular system is also common seen in thalassemia. Pregnancy is expected to further increase these risks; fortunately, such complications do not occur in our patient. With the development of new therapies, the effectiveness and successful rates of pregnancy are now increasing. Allogeneic hematopoietic cell transplantation (HCT) and gene therapy are now potential methods of treatment for thalassemia. Thousands of patients with thalassemia have undergone allogeneic HCT and outcomes were illustrated that about 81% patients have free recurrence of thalassemia [17].

Thalassemia during pregnancy may bring out unique management challenges that requires close maternal and fetal monitoring. The case we report is a thalassemia pregnant woman accompanied by megaloblastic anemia and AIHA and shows a good clinical outcome. This case alerts us that patients with thalassemia need to be assessed in detail to rule out other complex causes of anemia, especially when the frequency of transfusion increases or Hb level decreases progressively. The patients, who have received repeated transfusions or been in immune stimulating state like pregnancy, should be scheduled to screen and identify of alloantibodies and irregular autoantibodies. The effective treatment includes glucocorticoid, gamma-immunoglobulin or rituximab.

The present study was supported by a grant from the Shanghai Shen-Kang Hospital Development Center Emerging Frontier Technology Project (SHDC12015108).