Neuroendocrine small cell carcinoma of the bladder is a rare cancer, rapidly aggressive and metastatic with a very pejorative behavior. The diagnosis is based on histological analysis coupled with immunohistochemical study. Because it is rare, there is no consensus to date. Its management should be multidisciplinary, involving surgery, chemotherapy, and radiotherapy. We report two new cases of neuroendocrine small cell carcinoma of the bladder, one is pure and the other associated with urothelial carcinoma. The poor outcome illustrates the quick evolution of this tumor. A review of the literature on this topic is also presented.

Neuroendocrine small cell carcinoma of the bladder (SCCB) is a rare tumor and of very bad evolution. It has morphological and immunohistochemical characteristics common to neuroendocrine tumors found in other organs [1]. It is a particular histological entity characterized by a very early metastatic potential and a very severe prognosis [2]. Bladder localization is little known and its frequency is low (0.5% of bladder tumors) but certainly underestimated [3]. Its management must be multidisciplinary, combining surgery, chemotherapy and radiotherapy [2]. The authors report two new observations of small cell carcinoma of the bladder. This series, although short, can be considered important given the rarity of this entity.

60 year old patient was referred for management of high hematuria. The abdominopelvic CT scan showed the presence of a tumor of the right posterolateral bladder wall associated with numerous deep lymphadenopathies and multiple secondary hepatic foci (Figure 1). Histological analysis of the samples taken during a cystoscopy revealed a tumor proliferation largely dissociating the bladder muscle, made of two contingents, intimately mixed, one high-grade infiltrating urothelial, the other small cell neuroendocrine made of layers and spans of small cells, fairly monomorphic with a salt and pepper aspect chromatin. The mitotic index is very high. The immunohistochemical study confirmed the neuroendocrine nature of the small cell component by their positivity to chromogranin and synaptophysin. The patient received two courses of chemotherapy using cisplatin four weeks apart. He died after six months' follow-up.

49-year-old patient admitted for total hematuria associated with right lumbar pain. Radiology showed a tumor of the right lateral bladder wall and a homolateral ureterohydronephrosis requiring an emergency percutaneous nephrostomy. Cystoscopy showed the presence of a sessile formation of the right retrotrigonal lateral face. A deep resection was performed. Anatomopathological examination of the resection chips showed on certain fragments the existence of a dense tumor proliferation, largely necrotic and very infiltrating, largely dissociating the bladder muscle. It is made of cords, sheets and cell spans that are fairly homogeneous with small nuclei, hyperchromatic with strong mitotic activity (Figure 2). The immunostaining was positive for NSE and synaptophysin. He was chromogranin and PSA negative. The diagnosis of SCCB was retained. The patient underwent a cystoprostatectomy with left nephro-ureterectomy. Fifteen months after the intervention, the control CT scan revealed a local recurrence with bone metastasis in the left iliac bone. The patient received external radiation therapy (45 Gy) which improved the pain symptomatology. He died four months later (19 months after the procedure). 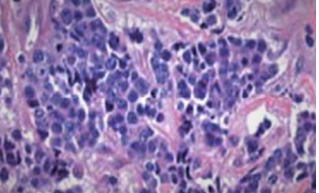 Neuroendocrine small cell carcinoma of the bladder was first described in 1981 by Cramer et al. [4]. It represents 0.5 to 1% of all bladder tumors and occurs in the elderly, between the fifth and ninth decades. The sex ratio is 3.6 men / 1 woman. Smoking was reported in 67% of the cases [2]. Its clinical symptomatology is not very specific. Hematuria is the most frequent telltale sign, present in 88% of the observations [5]. This symptom was reported in our two patients. Exceptionally, a paraneoplastic syndrome (Cushing's syndrome, hypercalcemia) is noted [6]. Endoscopic data usually show polyploid lesions of 4 to 10 cm, frequently ulcerated and necrotic [7]. These lesions are found on the lateral walls in 54% of cases [2].

The diagnosis is based on histological examination coupled with the immunohistochemical study. The anatomopathological analysis finds an undifferentiated tumor proliferation of small basophil cells organizing themselves in cords, in spans or realizing aspects of pseudorosettes. Tumor infiltration is often significant with damage to the muscle or perivesical adipose tissue [7]. In more than 50% of cases, it is associated with another tumor component such as urothelial carcinoma, more rarely adenocarcinoma or squamous cell carcinoma [8]. The diagnosis is confirmed by the immunohistochemical study, which reveals the expression of at least one neuroendocrine marker (synaptophysin, chromogranin A, specific neuron enolase) and the absence of expression of the common leukocyte antigen, thus eliminating lymphoma and anti-PSA antibody, eliminating metastasis from a prostate carcinoma. The search for a composite character is a decisive factor in eliminating a metastasis of the bladder from a small cell carcinoma of another origin, in particular pulmonary [9].

These tumors are aggressive, often discovered at an advanced stage even in the case of small lesions [3]. Metastases are present in 28 to 50% of cases at the time of diagnosis and occur in the lymph nodes, liver, bones, lungs and brain [10], requiring a complete extension assessment. The stage of the disease is defined by the TNM classification of the American Joint Committee on Cancer (AJCC) of 2002 [11]. By analogy to small cell carcinoma of the lung, some authors recommend to distinguish localized tumors and disseminated tumors, and not to use the TNM classification, which would seem not to be appropriate for this type of tumor [12]. The therapeutic modalities are not precisely defined due to the rarity of these tumors and only small series have been published [2]. In the absence of prospective trials, there is currently no therapeutic consensus and the results of the different therapies used vary widely from one study to another. From the literature, it appears that the treatment of choice for bladder SCCB is surgical excision combined with cisplatin-based chemotherapy. Despite therapeutic advances, the prognosis of SCCB remains extremely poor [13]. The overall five-year survival rate for all stages combined is 19% (16 to 25%) [10].

Bladder SCC usually presents at a later stage than urothelial carcinoma and therefore confers a worse prognosis. Multiple treatment algorithms have been used to treat local and metastatic disease, including cystectomy, partial cystectomy, radiation therapy, and neoadjuvant/adjuvant chemotherapy as well as chemotherapy alone. Low disease incidence makes it difficult to exclusively advocate for one treatment algorithm. Prospective studies need to be done to elucidate the most effective treatment by stage for bladder SCC.