Case Report: A 59-year-old woman presented in December 2018 with a renal mass found incidentally on a screening Computed Tomography. Magnetic Resonance Imaging of the Abdomen with and without contrast revealed an enhancing 2cm right lower pole renal mass. The patient elected to undergo laparoscopic with robotic assistance right retroperitoneal partial nephrectomy in March of 2019. Pathology was consistent with eosinophilic, solid and cystic renal cell carcinoma.

Discussion: ESC RCC is an emerging entity whose incidence will continue to rise as it is better recognized. To our knowledge, this is the 61st reported case. After reviewing the literature, we compiled a table comparing the available data for each of the 61 cases. We found that It predominantly affects females at a younger age than other forms of RCC. It appears to be more indolent than clear cell RCC with higher rates of organ-confined disease and lower rates of stage IV disease. There is limited data regarding imaging findings and only one article that looked at this specifically. There were only 3 cases of metastasis.

Renal cell carcinoma (RCC) has an incidence of 65,000 new cases a year in the United States accounting for 2-3% of adult malignant neoplasms. It also has the worst prognosis of the common urologic malignancies [1]. According to the 2016 World Health Organization classification, there are 16 distinct histologic subtypes for renal cell carcinoma with clear cell, papillary, and chromophobe being the most common types respectively [2]. This classification is important for both prognosis and for therapeutic recommendations. Recently, an eosinophilic, solid and cystic renal cell carcinoma (ESC RCC) histologic subtype has been described and proposed as a separate entity [3-5]. As of this paper, only 60 cases have been described in the literature [6]. Here we describe the 61st case of this newly described variant and review the literature.

A 59-year-old woman underwent a Positron Emission Tomography (PET)/Computed Tomography (CT) in December 2018 as a part of a work up for a lung nodule. The PET scan was negative except for an incidental renal mass that was moderately FDG avid. The patient underwent subsequent Magnetic Resonance Imaging of the Abdomen with and without contrast revealing an enhancing 2 cm right lower pole renal mass. The patient denied urologic complaints or gross hematuria. The patient was a former smoker with a 20-pack year history. No history of tuberous sclerosis. The patient elected to undergo a retroperitoneal robotic right partial nephrectomy in March of 2019. Pathology revealed an oncocytic lesion with macro and microcystic change as well as some hobnail like areas. Immunohistochemical stains performed at our institution revealed the tumor being negative for CK7, CD117, S100, and Ki67. Immunohistochemical stains performed at a second institution demonstrated staining with SDHB, positive staining CK20 and focal CK7 staining consistent with eosinophilic, solid and cystic renal cell carcinoma. The patient did well post-operatively. Retroperitoneal ultrasound three months post-operatively showed normal post-operative change. Her pulmonary nodule did not meet criteria for malignancy on PET CT and was stable on follow up CT chest in March of 2019. The patient’s final pathologic stage was pT1a.

Though ESC RCC was first described by Schreiner and colleagues in 2010, it is not new, just newly recognized. The literature has subsequently expanded to include 61 patients including the patient presented in this study. This number will continue to rise as many of these cases came from reviewing previously unclassified cases of RCC. Because of this, the current incidence is unknown but has been estimated to be ~ 0.2% [6]. Sections of the mass show a partially encapsulated lesion made up of solid areas admixed with cystic spaces with both areas composed of oncocytic cells. The tumor shows multiple areas where it invades through the capsule (Figure 1). The cells are arranged in an acinar pattern within the solid component and the cells lining the cysts show a hobnail appearance (Figure 2). The malignant cells in both the solid and cystic components show a similar morphology (besides the hobnail appearance within the cyst lining): malignant appearing nuclei with atypical nuclear membranes, prominent nucleoli, fine chromatin, and granular eosinophilic cytoplasm with a portion of the cells showing a defined cytoplasmic outline (Figure 3). On H&E, the tumor shows a low mitotic count. 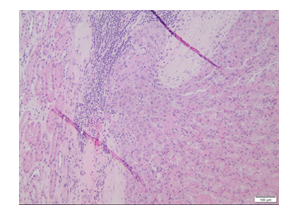 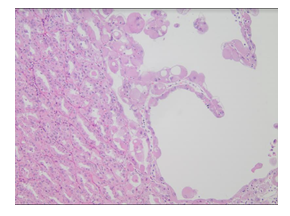 Figure 2: Higher power showing the hobnail appearance of the cyst lining next to solid areas. 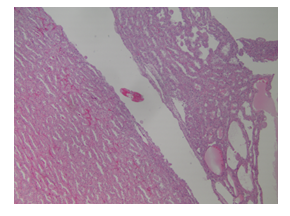 Most of the cases so far have been reported in pathology literature but the clinical utility in recognizing this histologic variant as a separate entity lies in predicting its clinical course and by changing practice recommendations. We attempted to view the data so far from the lens of a urology clinician and its application in the clinical setting. In order to do so, we compiled a table of the best available data for the 61 reported cases in the literature (Table 1). To our knowledge, this is the most comprehensive review of the literature to date, and the only one attempting to compile data for all 61 patients.

We found the median age at diagnosis to be 48.5 years with a range of 14-85 years. This is younger than the median age at diagnosis of all RCC of 64 years old [7]. ESC RCC preferentially affects females with 87% (48 vs 7) occurring in females compared to males. Though, initially reported in patients with tuberous sclerosis, the majority occur in non-TSC patients (79%, 31 vs 8). The laterality of the lesion was split evenly between left and right kidney.

An important area to consider is how ESC RCC presents radiographically and if there are certain findings on imaging that may alert a clinician that a tumor might be ESC RCC prior to having specimen for pathologic review. Unfortunately, data on imaging of ESC RCC is extremely limited in the literature. Fenelon et al published the only article to date focusing specifically on imaging findings of ESC RCC [8]. They described the imaging features of two patients at their institution. The first was a 49-year-old female with an incidental 4cm well defined nodule with small cystic areas in the medullary aspect of the upper pole of the right kidney. The second was a 30-year-old female with an incidental 3 cm cystic renal lesion with thickened irregular walls and septa (Bosniak III). Our patient had a 20 × 19 × 19 mm enhancing right lower pole renal mass with a few small internal cystic foci that demonstrated diffusion restriction and washout characteristics during delayed phases of contrast enhancement on MRI (Figure 4). All three of these patients had a cystic component to their mass. Much more data will need to be compiled in order to make any kind of inferences or predict ESC RCC based on imaging alone. We encourage future case reports to include more detailed descriptions of the masses on imaging. 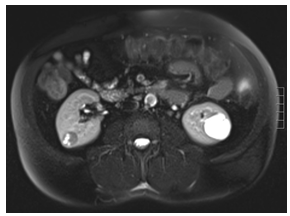 The pathologic stage and prognosis are particularly important in order to help guide clinical practice. ESC RCC has previously been suggested to have a more indolent course than clear cell RCC [6]. The data collected so far certainly agrees with that. The vast majority of tumors were small and organ-confined with 80% being stage pT1 (32 of 55 (58%) pT1a and 12 (22%) pT1b). Over 90% (50 of 55) patients had organ confined disease defined as stage I or II. This is considerably higher than the roughly two-thirds organ-confined disease for all RCC [7]. The median size was 41.5 mm with a broad range of 5-150 mm.

The first case was a 15-year-old female that presented with a multifocal 9 cm and 4 cm renal masses with inferior vena cava involvement and pulmonary emboli. She developed liver metastasis 2 years later and was treated with salvage chemotherapy. We are unsure what agent was used. She was noted to be alive with disease at 72 months of follow up [9]. The second case was a 69-year-old female with a 15 cm renal mass and 1 of 3 hilar lymph nodes found to have metastasis with ESC RCC [10]. The third case was 50-year-old female that underwent a radical nephrectomy for a pT1a renal mass followed by sunitinib and palliative radiation to a discovered left pubic bone and iliac crest metastasis. Patient was considering immunotherapy with nivolumab as well as hospice at last follow up.

There were 2 cases representing advanced pathology. The first of these was a 50-year-old male with a 20.5 cm tumor and extension into the adrenal gland and left retroperitoneum. The second was a patient with pT3a disease. With 3 cases of metastasis to date, that accounts for less than 5% of reported cases. This is again below the reported rate of stage IV RCC based on the national cancer database which ranged from 13.5-14.6% from 2007-2016 [11]. Follow up data was available for 34 patients. 29 showed no evidence of disease, 4 died of other causes, and 1 patient was alive with disease.

ESC RCC is an emerging entity whose incidence will continue to rise as it is better recognized. It predominantly affects females at a younger age than other forms of RCC. It appears to be more indolent than clear cell RCC with higher rates of organ-confined disease and lower rates of stage IV disease. With only 61 cases in the literature to date, much more data is needed to confirm these conclusions, but the table we constructed should build the foundation for future research.