Background: Although novel therapeutic regimens for melanoma continue to emerge, the best current clinical response rate is still less than 60%. Moreover, anti-melanoma treatments contribute to toxicities in other vital organs. In this study, we elucidate the therapeutic advantages of siRNA targeting melanoma NF-κB canonical signaling pathway with a peptide-based gene delivery nanoplex system.

Methods and Results: In vitro treatment of melanoma B16-F10 cells was used to demonstrate delivery and efficacy of anti-NF-kB siRNA to cell cytoplasm with a 55 nm peptide-based gene delivery system. NF-κB (p65) knockdown was validated both at mRNA and protein levels by using RT2-PCR, western blot, and immunofluorescence cellular staining. Canonical p65 mRNA was reduced by 82% and p65 protein was reduced by 48%, which differed significantly from levels in control groups. In vivo treatment of a melanoma lung metastasis mouse model with 3-serial i.v. injections of p5RHH-p65 siRNA nanoparticles retarded growth of lung metastasis within one week by 76% (p=0.003) as compared to saline control treatments.

Malignant melanoma, still a top five common cancer in the United States, exhibits only a 10-20% response rate to conventional chemotherapy [1,2]. Adjuvant immunotherapy with interferon-α and/or interleukin-2 modestly increases the response rate, but excessive toxicity from immunotherapy can outweigh the benefit [2-4]. The FDA-approved agent vemurafenib (PLX4032) used in tumors that harbor the V600E BRAF mutation improves response rates to 48% with extended survival [5]. More recently, immune check point inhibitors combining ipilimumab (anti-CTLA-4) and nivolumab (anti-PD-1) achieve a 58% response rate [6]. However, approximately 90% of patients receiving anti-CTLA-4 [7] and 70% of patients receiving anti-PD-1 [8] or anti-PD-L1 [9] monotherapy experience immune related adverse events. Based on adverse cardiovascular outcomes data from 2018 [10], ~ 34% of the patients developed myocarditis after receiving combination immune checkpoint inhibitors. In view of the modest benefits conferred by currently available therapies in concert with off-target toxicities in vital organs, we propose that a more localized approach to modulating dysregulated driver signaling pathways in the tumor microenvironment may represent a preferred alternative.

The constitutively activated NF-κB signaling pathway is a convergence point for dysregulated cellular signaling pathways in melanoma [11], and plays an important role in melanoma initiation [12], progression [13], invasion [14], metastasis [15], and resistance to chemo-and immunotherapy [16]. Under physiological conditions, NF-κB is sequestered in the cytoplasm as an inactive complex with the inhibitory protein IκB. Upon physiological and/or pathological stimulations, IκB is phosphorylated by the activated IKK complex, resulting in ubiquitination and degradation of IκB. Consequently, NF-κB becomes free to translocate to the nucleus where it initiates the expression of NF-κB dependent genes. Because NF-κB also is critical for proper immune cell function, its systemic inhibition could result in depressed surveillance against cancers and infections [17], indicating that local control at the site of tumor growth would be necessary for optimal clinical benefit and safety.

To that end, we have designed a flexible siRNA nanoplex delivery system comprising an amphipathic peptide ("p5RHH") capable of condensing siRNA into a stable 55 nm nanoparticle and preclinical validation studies have demonstrated that this peptide-based delivery platform is efficacious in atherosclerosis [18], necrotizing enterocolitis [19], pancreatic cancer [20], cancer angiogenesis [21], ovarian and uterine cancer [22], osteoarthritis [23, 24], and rheumatoid arthritis [25]. Moreover, NF-κB suppression in inflamed targeted tissues remains localized and does not disrupt important signaling actions of NF-κB in off-target tissues/organs [25]. Here we sought to elucidate the benefit of systemically administered p5RHH-p65 siRNA nanoparticles in a mouse model of melanoma lung metastasis and demonstrate that this approach markedly retards the development of melanoma lung metastasis.

Preparation of peptide structures for condensation of siRNA into 55 nm particles has been described in prior publications [26-28]. p5RHH peptide was synthesized by GenScript and prepared at 20 mM in molecular biology-grade water (46-000-CI; Corning, New York, NY, USA). siRNAs with or without Cy3 labeling were purchased from Sigma-Aldrich (St Louis, MO, USA) and were prepared at 100 μM in siRNA buffer diluted from 5x siRNA buffer (B-002000-UB-100; Thermo Fisher Scientific, Waltham, MA). For the formulation of nanoparticles, the peptide:siRNA mole ratio was 100:1. For in vitro experiments, p5RHH-siRNA nanoparticles were formulated by mixing p5RHH and siRNA in Hanks’ Balanced Salt solution (HBSS) (14025-092; Thermo Fisher Scientific, Waltham, MA) and incubated at 37°C for 40 minutes, followed by albumin stabilization according to prior description [27]. For in vivo applications, peptide and siRNA mixtures in HBSS were incubated on ice for 10 minutes prior to intravenous injection at a dose of 0.5 mg siRNA/kg. Prior physical characterization of albumin-coated p5RHH-siRNA nanoparticles revealed a particle size of ~55 nm with polydispersity of 0.282 and ζ-potential of −33.24 mV.

2.3 In vitro delivery of p5RHH-eGFP siRNA nanoparticles to B16-F10-eGFP cells

Male C57BL/C mice were injected with half million B16-F10 cells (Day 0) in PBS. p5RHH-p65 siRNA nanoparticles at 0.5 mg/kg or saline (control) was injected on days 4, 5, and 6. Twenty-four hours after the last treatment, mice were euthanized and lungs collected for tumor metastasis response. To quantify metastases, the lungs were blotted dry and imaged at 10X with a Leica dissecting microscope. The digitized images were processed by ImageJ for lung metastasis quantification. Briefly, the images were converted to 8-bit and brightness/contrast adjusted, before threshold for lung metastasis quantification.

Results are expressed as mean ± standard error of mean (SEM). Two-sided t-testing and One-Way ANOVA with Scheffe test were used. Statistical significance of differences was attributed at p < 0.05.

3.1 In vitro delivery of siRNA to the melanoma cells 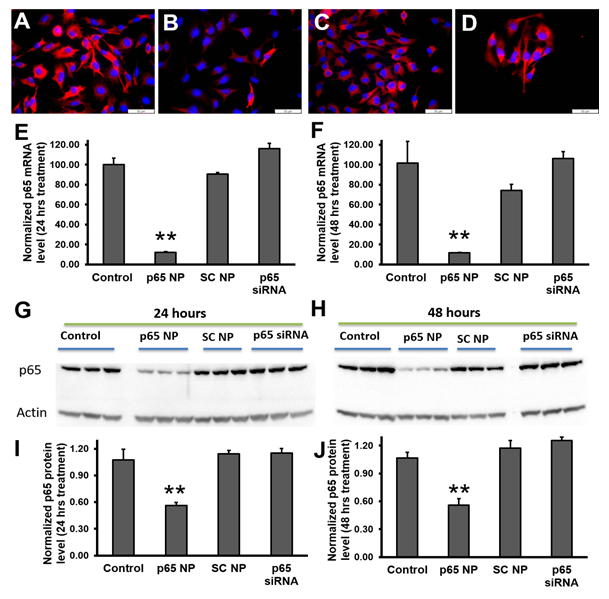 Following the initial description of endogenous RNA silencing machinery, the possibility that exogenously synthesized siRNA might serve the same purpose to inhibit RNA translation by engaging the RISC complex was demonstrated [29, 30]. Much has been discovered about the nature of the RNA molecule itself regarding modifications that stabilize and improve efficiency [31-33], but the search for a broadly applicable nonviral delivery platform remains a key to clinical adoption and utility. Traditional transfection agents including cationic lipids and polymers manifest high efficiency but can elicit cytotoxicity and are routinely sequestered in the liver. The current p5RHH peptide-nucleotide nanoplex delivery approach is agnostic to the nucleotide cargo selected and has been adopted in many labs working in collaboration on various disease substrates beyond the liver such as cancer [20-22], atherosclerosis [18, 34, 35], necrotizing enterocolitis [19], and arthritis [23-25]. The p5RHH protects the siRNA in circulation, while promoting a controlled sequence of cell entry, endosomal escape, and cytoplasmic siRNA release [26-28]. The interaction between nucleotide and peptide is initially electrostatic, but importantly an exothermic process of strong hydrogen bonding takes place between the histidines and nucleic acids to markedly stabilize the polyplex, as shown elegantly by Chou et al. [36]. Particle disassembly mandates an absolute requirement for an acidic pH such that particles are highly stable in circulation at neutral pH [26, 27]. Endosomal acidification at pH<5 results in complete protonation of the imidazole groups (pKa ~ 6.2) on histidine residues that disrupts strong hydrogen bonding, causing nanoplex disassembly, release of the nucleotides, and freeing of the p5RHH moiety. The free p5RHH peptide moiety is released locally at sufficient concentrations to disrupt the endosomal membrane and release the siRNA, whereas in circulation at physiological pH it cannot disassemble and disrupt other cell membranes [37]. Upon release from the endosome, the peptide is rapidly diluted in cytoplasm and exerts no untoward cell lytic action.

The present data demonstrate that inhibition of NF-κB (p65) expression is effective in controlling the growth of experimental melanoma lung metastasis. We have shown previously that NF-κB can be inhibited selectively in inflammatory pathologies such as rheumatoid arthritis without affecting adaptive or innate immune functioning and without inducing an immune response to the agent itself [25]. Moreover, NF-κB is not suppressed in other organs or tissues after i.v. injection because the peptide nanoplexes do not cross vascular territories with normal barrier function a contrasted with permeation of tumor vasculature by the endothelial permeability and retention (EPR) effect [38].

We suggest that suppression of canonical NF-κB signaling might be most useful as an adjunctive therapy in combination with other agents to augment anti-tumor activity or perhaps reduce the need for higher doses of more toxic agents. It also might be possible that inhibiting both canonical and non-canonical NF-κB signaling will provide additional benefit for interdicting melanoma lung metastasis, which could be tested easily by combining siRNAs in the same nanoplex since the formed particles are agnostic to the actual nucleotide sequence. In any event, these results confirm an important role for NF-κB signaling in the progression of melanoma lung metastasis and illustrate a simple and flexible systemic therapeutic strategy for its local control.

No conflicts of interest.