A Pathoplastic Presentation of Trichotillomania in Severe Depression- A Case Report

Citation: Malalagama AS. A Pathoplastic Presentation of Trichotillomania in Severe Depression- A Case Report. Journal of Psychiatry and Psychiatric Disorders 2 (2018): 77-80.

A 53 yr old man was admitted to the surgical ward for management of prolapsed haemorrhoides. He was referred to the psychiatry unit due to reduced speaking, eating and poor sleep. On assessment he had psychomotor retardation, almost mute and severely depressed. Beck Depression Inventory (BDI) score was 53 on admission. Hair in the entire frontal and half of bilateral parietal and temporal regions were absent with a clear margin (Figure 1). There were short strands of hair growing. No dermatological lesions were found. On questioning he revealed that he pulled his hair out as he felt compelled to and felt a discomfort in the scalp. He had thrown away the hair strands. He denied any psychotic belief related to hair pulling and felt relieved after pulling hair out. There were no psychotic symptoms. He denied feeling distressed due to the hair loss or was not worried about the appearance. The hair pulling has started one month back and got worse with time. He was pulling his hair when alone. Family revealed that he was depressed for the last 4 months and tried to leave home several times and became agitated when tried to stop. They couldn’t bring him to hospital due to his resistance. But when he had prolapsed haemorrhoids, the pain made him seek medical help.

He has a history of severe depression, 17 yrs back, when he was treated with electroconvulsive therapy (ECT). A second relapse occurred 2 yrs later after he defaulted treatment. He was well without medication for the next 10 yrs until this relapse. He had been dysthymic for the past 3 yrs following his mother’s death and gradually became depressed during the past 4 months. He has not shown the hair pulling behaviours in the past episodes, but has had psychotic symptoms. These is no family history of psychiatric illnesses or suicides or a past medical/dermatological history. He was treated with imipramine 150 mg nocte, olanzapine 10 mg mane, 20 mg nocte and was given 6 ECTs. He improved in mood and behaviour. BDI score came down to 12. Hair started growing again. He no longer had a desire to pull out hair (Figure 2). 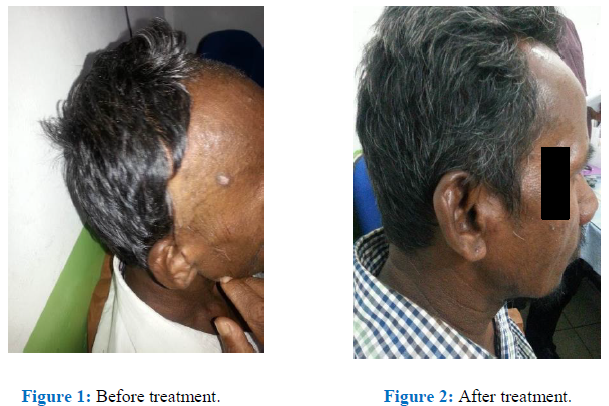 The patient has had two previous depressive episodes leading to a diagnosis of Recurrent Depressive Disorder. Hair pulling started 3 months after the onset of current depressive symptoms. This exhibits the chronological relationship of the two conditions. The current episode fulfils criteria for severe depression according to ICD-10. His hair pulling habit is compatible with Trichotillomania according to ICD-10 criteria which is “a disorder characterized by noticeable hair loss due to a recurrent failure to resist impulses to pull out hairs. The hair-pulling is usually preceded by mounting tension and is followed by a sense of relief or gratification. This diagnosis should not be made if there is a pre-existing inflammation of the skin, or if the hair-pulling is in response to a delusion or a hallucination” [1]. But according to DSM-V, Trichotillomania cannot be diagnosed if the symptoms are better accounted for by another mental disorder [9]. In this case, hair pulling was present during the episode of severe depression, which would have been driven by different types of negative affect, such as high negative arousal (e.g., stress) and insufficient levels of arousal (e.g., boredom) [4]. In Trichotillomania, hair pulling can be performed in response to negative affect, leading to emotional relief in the short term at the expense of strengthening the act of pulling in the long term. Therefore according to DSM-V, Trichotillomania cannot be diagnosed in this patient and is likely to be secondary to severe depression. It is further confirmed by the fact that the symptoms improved when mood improved with treatment. Even though it can be argued that the antidepressant used to treat depression also treated Trichotillomania, it is known that Trichotillomania is a pervasive and a chronic disorder that takes a long time to respond to treatment. But in this patient, hair pulling improved within a week of treatment. It is more likely that improvement of depression brought about improvement of compulsion to pull hair. Also, primary Trichotillomania classically starts in childhood and adolescence, whereas this patient had the onset of hair pulling at the age of 53 yrs.

It can be deduced from this case that Trichotillomania can present as a Pathoplastic presentation (the ability of a disorder in mimicking clinical features of another known disorder) rather than as a comorbidity to another disorder.
There are cases reported where Trichotillomania has presented as a Pathoplastic condition with Bipolar affective disorder and Vascular dementia [8, 10]. This case also brings light to the important differences between ICD-10 and DSM-V criteria for Trichotillomania.