2.Faculty of Nursing, National and Kapodistrian University of Athens, Greece

Acute respiratory distress syndrome (ARDS) is a rare occurrence in pregnant patients and, when it occurs, it usually raises diagnostic dilemmas as it is attributed to many causes. We present the case of a 32-year-old G1P0 woman at 31 weeks of gestation who was hospitalized because of bleeding per vagina and symptoms of gastroesophageal reflux disease (GERD) with episodes of vomiting. Within 72 hours from her admission, she developed dyspnea, cough and hypoxemia and was transferred to our intensive care unit (ICU). She was diagnosed with paraffin oil pneumonitis, treated accordingly and discharged in good health. We highlight medical personnel should keep high suspicion for paraffin oil pneumonitis in pregnant patients with features of GERD who develop ARDS after treatment with liquid paraffin.

Routine use of stimulant laxatives is not recommended in pregnancy as there is a risk of lipoid pneumonia occurrence caused by the aspiration of liquid paraffin and mineral/castor oil [3]. The most commonly affected patients are those at the extremes of age who have risk factors for aspiration. The result is either an inflammatory response with regional edema and intralveolar hemorrhage (presenting acutely with cough, fever, and dyspnea) or a ‘paraffinoma’ with aspirated oils encapsulated in the fibrous tissue (presenting with a mass seen on imaging in an asymptomatic patient) [3].

In this case report, we highlight the difficulty of differentiated diagnosis of acute respiratory failure in pregnancy and the role of paraffin oil administration as a cause of pneumonitis.

A 32-year-old G1P0 woman at 31 gestational weeks was hospitalized because of bleeding per vagina and frequent uterine contractions. The patient had 1-2 episodes of vomiting/day for the last 3 days. She also reported frequent heartburn.

Vital signs were normal and the physical examination was unremarkable. She did not report abdominal pain, dyspnea, cough, headache, visual disturbances or chest pain.

On the third day of hospitalization, the patient developed cough and shortness of breath. On physical examination she was dyspneic. Vital signs revealed hypoxia 80% on room air, tachypnea with a respiratory rate of 34, a temperature of 36.70 C, a heart rate of 125 beats per minute (bpm), and blood pressure of 110/60 mm Hg. Her physical exam revealed fine crackles at both lung bases. Heart sounds were normal without murmurs and clicks. The patient was in distress and diaphoretic. There was no facial or hand edema nor tenderness and swelling of the lower extremity. At that time, a chest X-ray showed bilateral infiltrates without bronchograms located in both lower lobes (Figure 1). The electrocardiogram was normal. 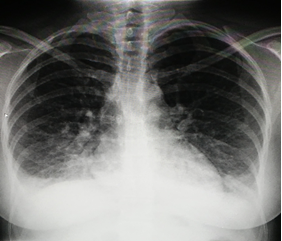 The patient was admitted to the ICU. Broad-spectrum antibiotics, intravenous corticosteroids, and high flow nasal oxygen (HFNO) were administered. Arterial blood gas sampling after initiation of HFNO (air 40l/min, FiO2: 0.35) showed a pH 7.50, PaCO2 28 mmHg, and PaO2 73 mmHg (PaO2/FiO2=208). The patient was treated with intravenous furosemide without an improvement of her symptoms.

Once arrived in the ICU she was submitted to laboratory tests, which were repeated until release (Table 1).

Liver and renal function tests, including prothrombin time, troponin I, and serum albumin level, were within normal limits. There was no proteinuria. A venous duplex Doppler sonography excluded deep venous thrombosis (DVT) while the transthoracic echocardiography (TEE) was normal.

The second day in the ICU the patient was still dyspneic, she had a dry cough, was on HFNO, had a temperature of 37.90C, no uterine contractions, normal diuresis, and fine crackles at both lung bases. Her abdomen was soft with normal bowel sounds.

Blood and urine cultures were negative. PCR for influenza was negative. The fetal heart rate was within 130 - 140 bpm rate. Amniocentesis performed that day did not reveal any organisms on Gram stain and culture was negative.
The patient was disconnected from the HFNO on the fourth day when she felt much better. She was afebrile, receiving oxygen with nasal canula on 1lt/min(pH 7.44, PaCO2 32 mmHg, and PaO2 92 mmHg), still had fine crackles at both lung bases but with improvement.

After five days in the ICU the patient was transferred to the ward. She was hospitalized two more days and then she was discharged home. At the time she was discharged she did not have any dyspnea or cough and the lungs were clear to auscultation.

Respiratory distress in pregnancy is an acute emergency and necessitates rapid assessment and therapy. Approximately 50% of the cases of pulmonary edema in pregnancy were attributed to tocolytic therapy or cardiac disease. The remaining cases were ascribed to either preeclampsia or iatrogenic volume overload [5]. Our patient received tocolytic therapy with oral nifedipine. Previous studies reveal acute pulmonary failure during tocolysis mainly with beta agonists and intravenous nicardipine [6].

Our patient did not respond to therapy with furosemide and the lung injury persisted for five days. She did not have known cardiac disease and the TEE was normal. There was no elevation in blood pressure and no proteinuria. At the time of acute lung injury (ALI) she was not receiving intravenous fluids, so volume overload was ruled out. She did not have symptoms of infection prior to the development of acute respiratory failure. She was afebrile and the CRP at the time of ALI was normal making the diagnosis of pneumonia unlikely [7].

Intra-amniotic infection was unlikely because the results of amniocentesis were normal and so was the fetal heart rate, while there was no history of asthma and no wheezes. Pulmonary embolism was taken into consideration but a venous duplex Doppler sonography excluded DVT since there was no right ventricle strain, there was no pleuritic pain or hemoptysis [8].

More so, amniotic fluid embolism was unlikely because of lack of cardiovascular collapse, seizers or disseminated intravascular coagulation, risk factors such as labor, multiparity, amniotomy, uterine manipulations, trauma [9]. Air embolism was also excluded because there were no intravenous manipulations [10,11].

Aspiration of gastric contents is most common during labor or soon after delivery. This is probably because the effects of sedation, analgesia, increased intraabdominal pressure, and recumbency are added to pre-existing factors that predispose pregnant women to aspiration. Aspiration may induce chemical pneumonitis, airway obstruction, or acute bronchospasm. Features of chemical pneumonitis include an abrupt onset of symptoms and signs, a cough productive of material that resembles gastric contents, diffuse crackles, and chest X-ray infiltrates that are multifocal and predominate in the dependent portions of the lung. In addition, fever is moderate [12].  Lipoid pneumonia is caused by the aspiration of mineral oil when used for constipation and the result is either an inflammatory response with regional edema and intralveolar hemorrhage or a ‘paraffinoma’ with aspirated oils encapsulated by fibrous tissue. In our case, we considered more possible that the patient’s acute respiratory failure was due to pneumonitis from paraffin oil as she was always alert, the aspiration was indolent and the cough was dry, without gastric contents.

To conclude, we highlight that medical personnel should keep high suspicion for paraffin oil pneumonitis in pregnant patients with features of GERD who develop ARDS after treatment with liquid paraffin. Thus, routine use of stimulant laxatives should be avoided during pregnancy.