The coexisting neurovascular symptoms emphasize the instability of subclavian steal syndrome as an originating retrograde circulation highly indicates ischemia with the luetic aging of neurosyphilis. The role of arrhythmia in the anatomic phenomenon of hypoperfusion predisposes brachiocephalic artery dissections in meticulous examination demanding anastomosis of cerebral vascular owing intracranial proliferative occlusions. And in the acknowledgment of neurovascular insufficiency, the probable follow-up of aortography extend the valve incompetence of stroke presentation with regards to noninvasive investigative prognosis clear the worsening events of bilateral carotid stenosis.

1. Introduction
Stroke as a 5th leading cause of death in the approximate of 800,000 populations worldwide circulates the long-term disability in the detrimental history of hypertension. The independent effects of (RAAS) system in the tolerance of cerebrovascular subtypes [1, 2] report the incidence of substantial risk factors at the greater actions on hemorrhagic stroke. The classified racial groups at the impact of atherosclerosis mainly victim the American women in the catastrophic misfortune of influenced survival rates. In the ethnic of SBP fluctuations, the prevalence of vascular constriction compliance highly increased the systemic relations [3] at the production of constrictive cerebral hypertrophy and syphilitic aortic aneurysm. The developing diminished nation from last decades signifies the diagnosis of dramatic infarction rates declines 30% of males in age-related classic deficit as compared to 25% females.

The community concerns in the collection of stroke control data requisite the registry from multicentre confirming the 1st attack of stroke in the population rate of 65?75 age group deteriorating the comparative studying methods in the alarming signs and symptoms at the condition of unconsciousness or comatose hemiplegic or bilateral paralysis for economical balance in medical care. Moreover, the prognosis in quality of treatment strikes the endangering differential diagnosis on thrombosis or embolism un specifying young ages frequency or the congenital diseases types by the assessments of LP, angiography and brain autopsy before and after complications for recovering the structural defect and of preferences of hospitalized traditions. The most accurately predisposing risk factors advance with 75% of diabetes in preliminary cases every year reform the causes of disease in the dependence of hypertension linking fatality.

2. Case Presentation
A 73-year-old man admitted in the hospital complaining the blurry vision with a visual field defect for more than a week prolong the feeling of dizziness episodes last 3-5 mints and get relieved on rest with no other significant illness. The medical history of 10 years hypertension considers the use of telmisartan in controlling high BP and also diagnosed with the frequent urgency of urination for past 1 year.

On physical examination, cardiac and lungs breathing sound were normal, no engorgement of jugular veins, no superficial enlargement of lymph nodes, no rebounded tenderness and no pain on pubic percussion. In the relevance of post mediated nervous system, the reflex of vasovagal syncope is common with neurological dysfunctions in confirming the obscure of fuzzy vision as an initial diagnosis. His medication on admission reviewed with antihypertensive drugs, lipid regulation, and symptomatic support to improve the circulation. At admission, BP was 146/99 mmHg, HR 16 beats/min, pulse 89 beats and T 36.2 C. The ophthalmic and neurological consultations consider the possibility of stroke and hyperaldosteronism by the lab values as shown in Table 1 with plasma renin activity 4.82 pg/ml and plasma aldosterone concentration 145.26 pg/ml. Therefore, they continue with antiplatelet aggregation, potassium supplements and recommendation of head and neck CTA further with 24 hrs urine monitoring. 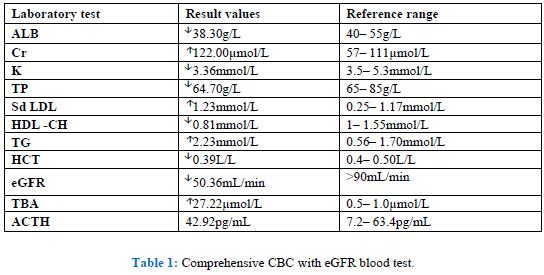 The neurology department suspect acute phase of cerebral infarction and intracranial aneurysm in MRI at right parietal occipital lobe with partial softening of foci formation at corpus callosum defining brain atrophy as shown in Figure 1 confirm the lesion at left temporal side shrinking the white matter with the exception of arteriosclerosis at aortic arch high risk 50?69% at right subclavian artery revealed in neck ultrasound. There are no obvious signs founded in skull differentiating the normal shape and size of chambers except the slight narrowing of flail brain.

On the 7th day of regular monitoring with anti-arrhythmia, the patient started reducing BP with HR 77bpm but still complain vision loss and discomforts on observing the metabolic panel as in Table 2 rule out the high 17-OH, 17-KS and VMA/24h examination with no peripheral edema. The general fair condition of patient based on temporary maintenance of current status signify transient cerebral ischemia with multiple lacunars infarction and the fluctuation of SBP 150?160 mmHg clearly make the routine testing more diagnostic by CT scan of adrenal glands in the referred evidences of glucose +1 in urine, HbA1c 5.7%, risk of CKD at the regulations of aldosterone test, sustained eGFR, symptoms of fatigue and urine retention. In the source of the stroke at unremarkable cerebrovascular immune compromised patient, the abnormal rhythm includes long-term electrocardiogram susceptible to RBBB or the traces of mitral regurgitation. The absolute etiology can be screened by HIV and syphilis test with the combined biomarkers of acute MI in Table 3 on investigations of bilateral extra-cranial coronary ostial stenosis with hemodynamic significance.

Table 2: Diagnostic value of potassium in composition of plasma and urine monitoring. 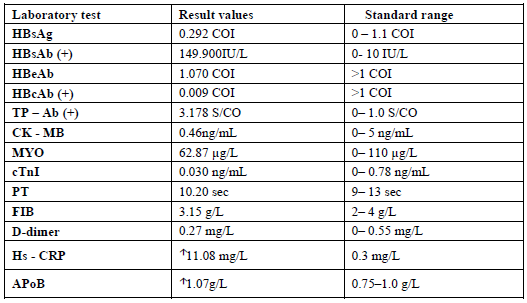 At 18th day the noticed phase I morphological changes in right subclavian artery the patient was transferred from urology to cardiology IV department in the consideration of organic cardio pulmonary disease, echocardiography results AAOD=38 mm, LAD=31 mm and LVDD=45 mm high risk the syndrome with subclavian steal steno-occlusion as on the notable tachycardia and protrusion at left-sided subclavian artery. Moreover to complete the disease profile CTA of abdominal aorta confirm the visibility of punctuating calcification dynamic to ulceration at external iliac artery walls with the thickness and normal lumen outflow as shown in Figure 3 currently make the selective decision of vascular surgery if primarily not treated with antibiotics. The examined reports show no obvious aortic dissection and signs of aneurysm rupture, so clinically surgery cannot be chosen as the first option in the management. The Patient can be discharged with pharmaceutical drugs continuation on stable condition. 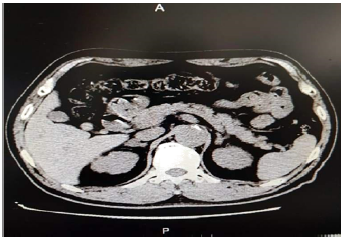 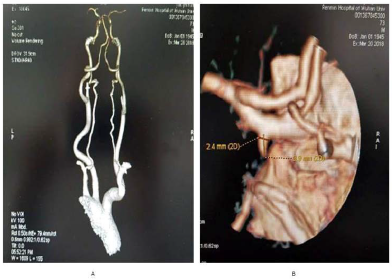 4. Treatment
The initiative therapy begins with anticoagulant (warfarin) and antiplatelets (aspirin, clopidogrel) in the preventive risk factor of AF, CAD, and hypercholesterolemia. Secondly, use of streptokinase TPA in the treatment of an aneurysm. And lastly the IV glucocorticoids in restoring the cortisol metabolism. On the 20th day patient left the hospital.

5. Discussion
The Medicare enrollments in the variations of US study database describe the concept of “Stroke belt” in the illustrative hypothesis of differentiating few studies i.e. (REGARDS) in the prediction of aggressiveness at various geographic outcomes of risk factors disparities mechanically explain the intra cerebral- subarachnoid infarction. The abrupt onset of TIA in the temporary duration of first 24hrs wide the complexity of adjusted characteristic prevalence at the population-based analysis [4]. The arbitrary time-based consensus reflects the rate of stability in terms of transient episodes evident the abnormalities on MRI for the potential estimation of fixed tissue damage [5] on the identified valid asymptomatic cerebral approaches.

The INTERSTROKE modify the study on affiliation of hypertension greatly to attribute 50% differential diagnosis effect by including epidemiological studies in the reduction of stroke combining the clinical trials of (HOPE) in protection (PROGRESS) and (LIFE) to prevent high BP and (ALLHAT) sighing the modest aim of achieving SBP 4mmHg and DBP 2mmHg for a better CVD improved results [6-9]. The measured variability in the isolation of SBP for instance, the AF in 8% of incidence above 65 years age derive the epidemiological conclusion in arrhythmia for continuous monitoring on the idiopathic cause of unexplained revealing stroke [10]. The conflicting hypercholesterolemia in higher LDL and TG robust the pathophysiological features heterogeneity including CAD [11] and high-risk LVH in an association of MI national guidelines on 28% EF reduction [12]. And also the adjusted ratio 2.32 in the presence of dyslipidemia subjecting American ? Africans elevate HbA1c in the insulin resistance of metabolic syndrome conferring the reoccurrence of T2DM responding the control of glycemia screening by the reliable standardized generic treatment [13, 14].

The Framingham stroke study observes the platelet aggregation and hematocrit by the relative risk of cigarette smoking annually average 50% chances of carotid stenosis rate ipsilateral stroke at high alcohol consumption leading to coagulability. The life expectancy experiencing the endogenous measures of safeguard treatment relate systematic evidence (NOMASS study) [11] to calculate the weighted percentage of hospitalized ischemia death ratio in the distribution of P value 0.001. In contrast, the intervention of underlying burden outline the preventive programme in the apparency of MI grading the complicated white and gray matter consistent with phases of severity. The findings at AMORIS and NOMASS simplify the main objective of carotid artery by exploring the immunological cellular pressure to drop CBF brain perfusion inquiring the role of apolipoproteins susceptive to occluded injury in collateral blood flow. Therefore, the precluding investigations in neurosciences parallel to determining valves must sufficiently record the details of neuroimaging to hamper the samples in the targeted risk factors with 90% of confidence interval comforting the global zone.

6. Conclusion
We would like to share the contradictory experience in this case by displaying the symptoms of cerebro cardiovascular imbalance in the paradox of clinical implications highlighting the clinical history and physical examination of patients with the attachments of uncommon disease of aortic aneurysm solitaire the functional percutaneous control study respective to stroke risk factors. And further based on retrospective studies, the recognizing significance of infarction can be managed by the use of diuretics in the regulations of osmosis to ideally be a logistic intervention of therapeutic treatment.