Knowledge and Attitude About Sweeteners Among Type 2 Diabetic Patients

Mayasah A. Sadiq, Alaa A. Salih*

Background: Globally in 2013 about 382 million people are diabetics, 90% of them are type 2, that meticulous diet control is crucial in a treatment as diabetes is the 8th leading cause of death worldwide.

Objective: To assess the knowledge and practice towards sweeteners in a sample of type 2 diabetic patients as few researches cover this subject in Iraq.

Patients and method: A cross-sectional study in which convenient sample of 440 diabetic were collected and interviewed from the Centers of Diabetes and a primary health center in Baghdad during the period from 14th of March to 3rd of July 2014. Knowledge has been studied, in addition to assessment of other variables, including gender, age, education and disease duration.

Results: The results showed that 52% of the sample use sweeteners in diet 79% used 5-10 tablet/ day.

Conclusion: Majority of our sample have good knowledge and their practice of using sweeteners is in the approved range of tablets number by the FDA.

This goes hand in hand with the rise in the occurrence of obesity as its prevalence according to the WHO has tripled between 1975 and 2016. in that about 1.9 billion adults, were overweight. Of whom over 650 million were obese [2].

Diabetes mellitus ,obesity and the upgrading of health awareness all have participated in the increased rates of non-nutritive sweeteners consumption as they provide a sweet taste without affecting blood sugar level thus are crucial for dieting [3]. Such sweeteners have been part of the life-style modification in diabetics especially meticulous diet regimen which is necessary for weight reduction and hence HbA1c level decrease that play an important role in minimizing diabetes mellitus complications [4]. Artificial sweeteners have been widely used all over the world not only solely but also had been combined in many types of food giving them the sweet taste without calories like diet beverages no study has documented any carcinogenic effect, although are safe but must be consumed in minimum to ascertain their benefit [5-6].

A cross-sectional study has been carried out in the Center of diabetes and Hay-Aladel PHC Iraq-Baghdad. From March the 7th 2014 to July the 3rd 2014, the researcher had interviewed a sample of known diabetic patients on treatment, using a specially constructed questionnaire that contain in addition to demographic data as age, sex educational level-questions regarding duration of diabetes mellitus and questions assessing sweeteners knowledge, their attitude towards it and their use. The interview took about half an hour for each participant. The study sample was convenient of 440 patients, the permission of the participants was sought, all of them were willing to participate giving a 100% response rate. Data entry was done using SPSS 23rd version. Scoring of knowledge was calculated then classified as good, fair and poor. The results were expressed in tables and graphs.

Table 1: Outcome of the study carried out in the Center of diabetes and Hay-Aladel PHC Iraq-Baghdad.

47% of the sample was secondary school graduates as in the Figure 1, 5-10 years was the duration of diabetes in 42% of patients and only 25% of the patients spent less than 5 years being diabetics as the (Figure 2) below expressed.

Figure 2: Duration of diabetes in patients with reference to years. 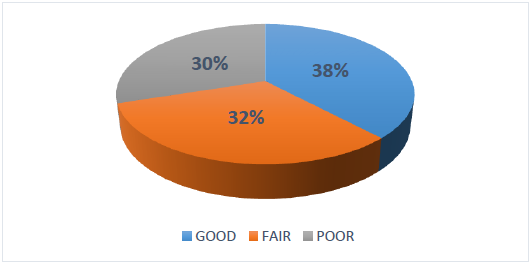 In comparison to the study of Bijapur 24.8% of them having good knowledge while 59.9% were of average knowledge, our higher level of good knowledge might be explained by the fact that our sample is selected from the diabetic center and primary health center such patients are voluntarly caring for themselves not like the Bijapur hospitalized patients [7]. 37.8% of Bijapur diabetics were using sugars and only 5% use sweetners which is negligible regarding our 52% sample (Figure 4) [7].

Figure 4: Use of Sweeteners.

From the sweetners users of our study, 79% used 5-10 sweeteners tab per day while non used more than 10 tabs (Figure 5). 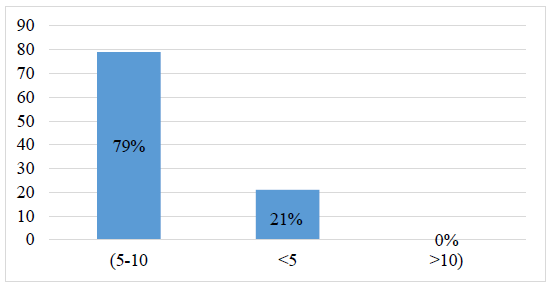 When comparing our study sample results to that of Saveetha dental college we found that 81% out of the 57.4% users from 102 diabetics, used aspartame sweetener up to 4 times daily [8].

Majority of our diabetic patients have good knowledge regarding sweetners,although more than half use them in their daily practice reaching number less than 10 tabs per day which is approved by the FDA. Still 30% of them need knowledge empowerment and hence practice improvement for better sugar control.