Conclusions: Women in the geographic region of the study had low body mass index depicting chronic malnourishment. BMI below 19.5 kg/m2 and above 25 kg/m2 were good predictors of low birth weight babies and had significant association with birth weight, length, head circumference, arm circumference and chest circumference.

The most suitable objective anthropometric indicator of nutritional status of the adult is Body mass Index (BMI). This anthropometric indicator, derived from measures of weight and height of individuals, is consistently and highly correlated with body weight (or energy stores within the body) and is relatively independent of the height of the adult [1]. Data on BMI are relatively easy to collect and inexpensive to analyse. BMI, defined as weight in kg divided by height in meters squared [weight/(height)2], is still considered a simple, useful index for evaluating pre-pregnancy nutritional status in clinical settings ]. The Institute of Medicine (IOM) modified the body mass index (BMI) categories formulated in 1990 (underweight, <19.8kg/m2; normal weight, 19.8–26kg/m2; overweight, >26–29kg/m2; obese, >29kg/m2), to correspond to the 2009 World Health Organization classification (underweight, <18.5kg/m2; normal weight, 18.5–24.9kg/m2; overweight, 25–29.9kg/m2; obese, ≥ 30kg/m2) and further recommended BMI-based weight gain during pregnancy [3]. Pre-pregnancy BMI is reportedly associated with pregnancy outcomes as an independent factor [4, 5 ] Low pre-pregnancy BMI is considered a marker for minimal nutrient reserves, fetal growth restriction and adverse pregnancy outcome [6]. The present study was conducted to evaluate the influence of maternal height, weight and pre pregnancy BMI on fetal growth parameters (fetal weight, length, ponderal index, chest circumference, head circumference and arm circumference) at birth.

After ethical approval and written consent from participants a hospital based prospective observational study was carried out in the department of Obstetrics and Gynecology of Mahatma Gandhi Institute of Medical Sciences, Sevagram, a rural based tertiary care hospital in eastern Maharashtra in central India. Pregnant women in the first trimester , amenable for follow up, who visited the outpatient department (OPD) or who were admitted in the maternity wards of the study site were recruited. over a period of 24 months (1st December 2012 to 30th November 2014). 500 consecutive, consenting pregnant women, regardless of age and parity, having singleton pregnancy participated. Detailed history was taken regarding socio-demographic characteristics like age, area of residence, gravidity, parity, booking status, literacy and socioeconomic condition. Maternal pre-pregnancy weight were recorded during her first antenatal visit in first trimester in kilograms on single, digital weighing machine. The woman was allowed to stand barefoot and motionless on the scale and weight was recorded to the nearest 100 gm. Zero error was checked for and removed every time if present. During the first 13 weeks of gestation aweight gain of around 1.7% can be assumed [7]. Thus, 250 gm was subtracted from the weight measured in first trimester to obtain the recording of pre pregnancy weight (PPW).

Height in meters was recorded with the individual standing on plain ground against a straight wall. The investigators standing to the left held the subject’s chin with his/her left hand and the occiput with right little finger in the Frankfurt horizontal plane (an imaginary line joining the tragus of the ear to the eye). A hard quadrangular board was place over the head of subject and touching the wall. The level was marked with pencil and distance from ground was measured by non- stretchable tape with nearest 0.1 cm.

Body mass index was calculated by the equation: Weight in kg/ height in meters squared. BMI categories were defined according to WHO Classification (Table 1).

Further antenatal monitoring of the woman was done as per standard protocol without any interference from the research study. Planning and advice of pregnancy and any interventions took place as per the consultant who was looking after the woman and her pregnancy.

Newborn resuscitation and care was looked after by Paediatrician and adverse events if any were recorded. The naked baby was placed on an electronic weighing machine and birth weight was measured to the nearest 10 gram. Birth length, chest circumference, head circumference and arm circumference were measured in cm by using measuring tape. Ponderal Index was calculated by the formula,

The data was entered in a spread sheet (Excel). Statistical analysis was done by using Descriptive and Inferential statistics using chi-square test, z-test, one-way ANOVA and multiple logistic regression analysis. The soft- wares used in the analysis were SPSS 17.0 version and Graph Pad Prism 5.0. The proportions were compared by chi square test. Multivariate logistic regression models were used to find out independent association of prognostic factors. A two-level P value <0.05 was considered as statistically significant.

The present hospital based prospective observational study was done in a rural based tertiary level institute. A total of 574 singleton pregnant women in first trimester, after fulfilling inclusion and exclusion criteria were enrolled for the present study of which 481 (83.9%) came for follow up on their own and 19 (3.3%) turned for final follow up after personal phone call and home visit by auxillary nurse midwife (ANM). Thus, data of 500 study participants could be finally analysed. An overview of the data showed that there was no macrosomic baby (Birth weight more than 4000 grams) in the study. The magnitude of low birth weight (LBW) babies was seen to be high. Thus, after initial descriptive statistics, study participants were grouped into those giving birth to low birth weight babies (below 2500 gm) and normal weight babies (above 2500 gm) for inferential statistics [9]. 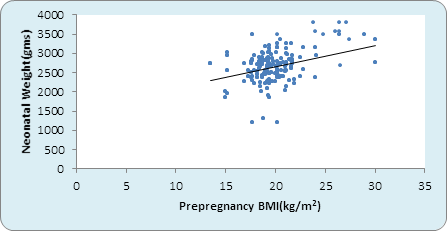 When sensitivity and specificity at each point was calculated ,as in pre pregnancy weight <35, <40, <45, <50, <55, <60, <65 kg, it was found that as the weight of women increases sensitivity of detection of low birth weight increases and specificity decreases (Graph 3). And at one point it meets which is designated as values at the point of interaction. This is the cut-off point above which sensitivity is maximum and below which specificity is maximum. Cut off point in pre pregnancy weight was <45 kg, and pre-pregnancy BMI was 19.5 Kg/m2 (Graph 4). 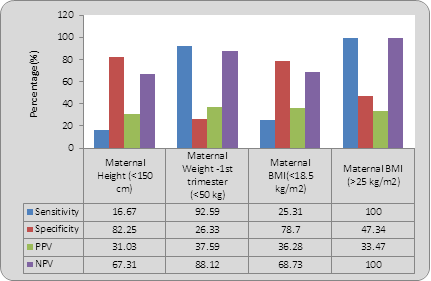 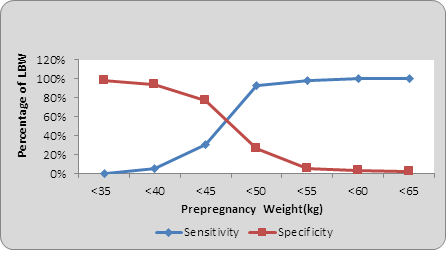 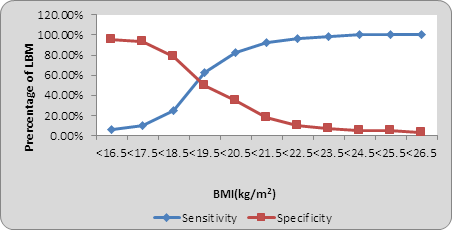 Backstrand et al. [24] found that at all periods of pregnancy the best predictors of birth weight were maternal weight and BMI. In pre-pregnancy and in first trimester the BMI had marginally stronger correlations than weight alone. Plots and multiple regression models suggest that most of this effect of BMI is due to weight, with little independent effect of height. Similarly, Ogunyemi [25] et al. showed that prepregnancy BMI was significant predictor of low birth weight. Evidence indicates that women with low pre-pregnancy BMI are more likely to have smaller infants than heavier women, even when their gestational weight gain is the same (Yucel and Cynar et al. [26] 2009). The present study corroborates these findings.

Causes of low birth weight are complex and interdependent, but the anthropometry of the mother and her nutritional intake are thought to be among the most important [31]. Pre-pregnancy weight and body mass index (BMI) have strong, positive effects on fetal growth, suggesting that energy balance is an important determinant of birth outcomes. The WHO collaborative study on maternal anthropometry and pregnancy outcomes, using data from 111,000 women from across the world reported that mothers in the lowest quartile of pre-pregnancy weight, carried an elevated risk of IUGR and LBW of 2.55 (95% CI 2.3, 2.7) and 2.38 (95% CI 2.1, 2.5) respectively, compared to the upper quartile. A study in India reported the odds ratio for LBW among Indian mothers to be three times more in severe chronically energy deficient (CED) low BMI groups when compared to normal BMI groups. Another prospective pregnancy cohort study carried out in Bangalore, India, confirmed that a low maternal weight at baseline is an important predictor of IUGR after controlling for potential confounding variables. Low maternal body weight had an association with higher risk of IUGR of marginal significance (AOR: 1.62; 95% CI: 0.83, 3.15; P=0.09).

BMI is the most efficient screening tool for high- risk mothers during pregnancy. A study in Bengal by Bassi et al. [32] found that, mother’s BMI had high sensitivity and more negative predictive power . In our study, Maternal pre-pregnancy weight below 50 kg had a high sensitivity of 92.59% and negative predictive value of 88.12% with a likelihood ratio of 1.25 for LBW babies, however, the specificity was low. Maternal BMI below 18.5 kg/m2 had a specificity of 78.70 and likelihood ratio of 1.18 in predicting low birth weight. Maternal BMI above 25 kg/m2 had 100% sensitivity and 100% NPV in detecting LBW babies with a likelihood ratio of 1.05. The average women seeking care in this area of rural central India has a lean pre-pregnancy weight and low body mass index thus representing the effects of chronic malnourishment in infancy, childhood and adolescence. Thus there is a need to focus on interventional programmes targeting the adolescent population so that the prospective mothers would have appropriate weight and BMI, affecting positively the future generation.

Women in the geographic region of the study had low body mass index depicting chronic malnourishment. The main health problem that has emerged from the study is the existence of malnourishment in the obstetric population dating back to poor nutrition in childhood and adolescence finally leading to poor neonatal outcome in the form of high prevalence of low birth weight. The prevalence of maternal obesity was low and there was no macrosomic baby in the study. A BMI below 19.5 kg/m2 and also above 25 kg/m2 were good predictors of low birth weight babies. Maternal BMI had a significant association with birth weight, length, head circumference, arm circumference and chest circumference, thus indicating a need to concentrate on public health interventions in the form of nutritional enhancement of girl child in childhood and adolescence and improved pre-conceptional care to obtain a good neonatal outcome. In spite of its limitations, the present study provides interesting findings and important information which can benefit in planning and implementing maternal and child health services in the region.

The present study had a few limitations. Most important was that it was a hospital based study, thus the chances of getting referred cases were high. The majority of women included in the study lived in the surrounding area. The result of this study, therefore may not be completely applicable to women living and delivering their babies in more remote areas of the district.

We acknowledge sincerely the support of faculty and postgraduates of Obstetrics, and administrators of Mahatma Gandhi Institute of Medical Sciences, Sevagram , India and Kasturba Health Society. We also acknowledge the participants of the study