Neuroendocrine neoplasm occurs predominantly in the lungs, but can be occasionally found in the gastrointestinal and genitourinary tracts [1]. When this neoplasia affects the genital tract, usually involve the uterine cervix and the ovary [2]. Neuroendocrine tumors are classified as poorly-differentiated and well differentiated, and further categorized into small and large cell neuroendocrine carcinomas. Approximately only 90 cases of small cell neuroendocrine carcinoma of the endometrium have been reported [3,4]. Studies of large cell endometrial neuroendocrine carcinoma (LCNEC) are even less common, with only 16 cases documented [1,5,6]. Our case concerns a 58-year-old woman with a metastatic LCNEC arising from the endometrium. We, correspondingly, also reviewed the literature and emphasize the most important diagnostic and therapeutic aspects of this rare clinical entity.

A 58-year-old woman was referred to our hospital with postmenopausal vaginal bleeding. Her obstetric history included two cesarean sections, the last of them due to a twin gestation obtained by in vitro fertilization. She experienced onset of menopause at age 52 and was treated for 5 years with hormone replacement therapy for her menopausal symptoms. Her gynecological history included endometriosis and miomatosis. The woman reported smoking two packs of cigarettes per year.

vaginal wall. Upon palpation, the uterus was enlarged, and the cervix was mobile. A subsequent rectal examination ruled out parametrial involvement. A biopsy of the vaginal tumor and the endometrium was then performed. The histological analysis of the vagina and endometrium biopsy revealed a LCNEC grade 3, with a Ki67 index of 45% and 24 mitosis per 10 high power fields (Figure 1 and 2). A magnetic resonance (MRI) was performed observing an enlarged uterus with a poorly defined tumor of 3 cm that diffusely infiltrated the myometrium, enlarged pelvic nodes and bone lesions in the sacrum and acetabulum; suggestive of a malignant uterine neoplasm with lymphatic and bone metastases. 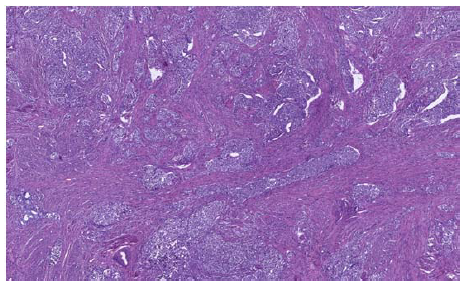 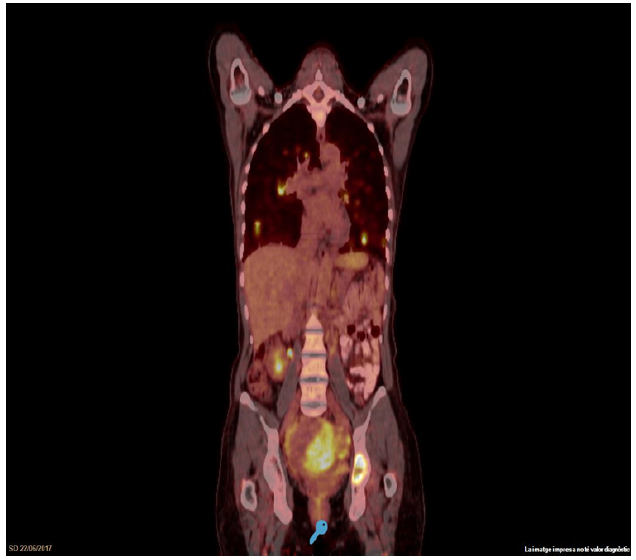 She was diagnosed as a stage IVb LCNEC of endometrium, according to the 2008 International Federation of Gynecology and Obstetrics (FIGO) staging. Octreoscan performed before beginning treatment revealed somatostatin receptor positive tissue in the endometrium.

Based on these findings, the patient received 6 cycles of chemotherapy with cisplatin and etoposide. Another PET/TAC scan was performed, four months after the beginning of chemotherapy, to evaluate the response to treatment. Pulmonary lesions were not detectable, and a demining of the pelvic pathological lesions (uterus [SUV of 2.42], lymphoid and bone [SUV of 3.8]) was observed (Figure 4). Tumor markers values after finishing chemotherapy were normal: Ca 125 36 U/mL, SCC 2.2 ng/mL, neuron specific enolase 12 ng/mL, except CEA 5.9 ng/ml and Chromogranin A 1180 ng/mL.

Our multidisciplinary oncology committee decided to perform a debulking surgery, including a hysterectomy and the removal of the vaginal tumor and enlarged pelvic lymph nodes, six months after diagnosis. The histologic analysis of the uterus and lymph nodes revealed a high grade LCNEC, affecting endometrium, lymph nodes and vagina. The tumor was positive to chromogranin and synaptophysin in 80% and 50% of neoplastic cells respectively. Lanreotide (a synthetic somatostatin analog) autogel 120 mg/28 days, as maintenance treatment, was prescribed due to an octreoscan captation before surgery.

One month later, the patient was admitted in the hospital due to hemoptisis. A pulmonary angio-CT was performed revealing multiple cavitated pulmonary nodules. Second line chemotherapy with Topotecan was indicated. 18 months after

the initial diagnosis the patient is alive, with persistent illness. Pulmonary lesions, lymph nodes and bone metastases are stable. The patient is still undergoing topetecan treatment. 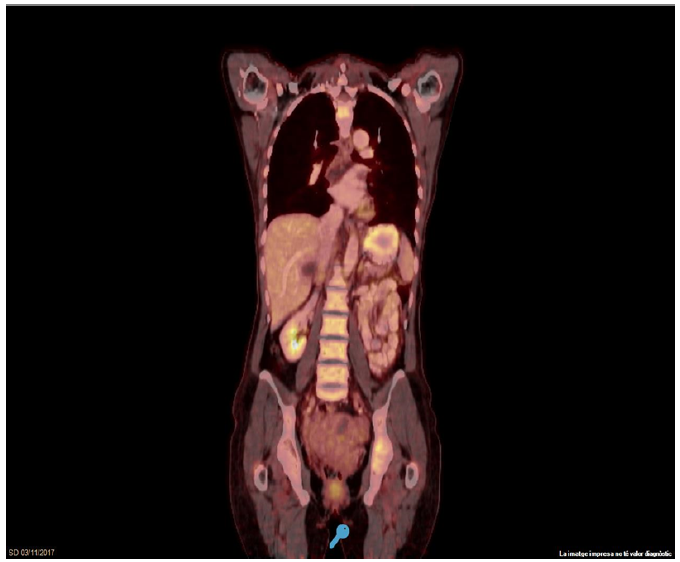 In 2014 for the first time, neuroendocrine tumors were included in the histological classification of uterine corpus tumors in the WHO’s categorization of tumors of female reproductive organs [7]. According to the WHO classification of lung tumors, [8] LCNEC are diagnosed based on large cell carcinoma; large cell size with low nuclear to cytoplasm ratio, > 10 mitotic counts in 2 mm2 of viable tumor and the presence of neuroendocrine histology (organoid pattern with formation of nests, palisading, rosettes, or trabeculae with peripheral palisading), as well as one or more immunohistochemical positive neuroendocrine markers (chromogranin, synaptophysin, or CD56). In our case, the tumor was positive to chromogranin and synaptophysin in 80% and 50% of tumoral cells, respectively. 16 cases of endometrial LCNEC described in literature demonstrated at least two positive-stained neuroendocrine markers in the immunohistochemical assays [1].

It is difficult to give a preoperatory definitive histologic diagnosis on small specimens [1,5]. In our case, this was possible as we were able to obtain more material from two biopsies of the endometrium and vagina.

The age of diagnosis of the 16 cases described in literature, range from 40 to 88 years old with a mean of 63.4 years old [1], the majority of which were postmenopausal, like our case (58-years old). The most common initial symptom was postmenopausal bleeding (12/17 cases), like our patient’s case.

Smoking and endometrial LCNEC has yet to be investigated thoroughly. Only one study reported a patient with LCNEC who had smoked two packs of cigarettes per day for more than 30 years [9]. Our patient smoked only two packets of cigarettes per year, which would not appear to be consequential.

Blood tumor marker Ca-125 could be elevated in cases of LCNEC [1]; in our case Ca-125 was elevated to 200. Tumor markers levels could be used for monitoring treatment response. Treglia et al observed that 18F-FDG PET/TAC may provide useful prognostic information in patients with high-grade neuroendocrine tumors, like our patient’s case [11].

It is clear that multi-modality approach is required for the treatment of this rare tumors with a poor prognosis.

There is no surgical standard for this rare histology and treatment depends on stage of the tumor. As in our case, hysterectomy and bilateral salpingo-oophorectomy is the surgical procedure more commonly used (11/16) [1]. There are only 4 recorded cases of radical hysterectomy being performed. Lymph node dissection is performed in 9 of the 16 cases described in literature [1]; in our case we performed a pelvic debulking of enlarged suspicious pelvic lymph nodes. Omentectomy was performed in 8 cases of the 16 described in literature [1]. Although complete surgical staging with omentectomy and pelvic and paraaortic lymphadenectomy is required for accurate staging of uterine cancer, Nguyen et al observed 8 of the 13 reported cases of endometrial LCNEC presented in advanced FIGO stage III or IV disease. Given the poor prognosis of the disease, even following surgical debulking, some authors may consider administering neoadjuvant chemotherapy when a preoperative diagnosis is possible [12], as we conducted on our patient.

There is limited data concerning adjuvant or neoadjuvant treatment of LCNEC of the endometrium, also in first line setting. Platinum and Etoposide based chemotherapy is generally used, by extrapolating data from LCNEC of the lung, since data for cervical and uterine endocrine tumors is limited [13,14]. We used Etoposide and Platinum as first line therapy, with partial response of the disease. After relapse, we treated the patient with second line chemotherapy with Topotecan, based on LCNEC recommendations. Other therapies, in second line chemotherapy, reported by other authors are; cyclophosphamide/doxorubicin/Vincristine (CAV) and irinotecan/platinum (IP) [10,14-16).

As was our case, two authors have reported the use of somatostatin analog with combination with chemotherapy for the treatment of two advanced cases of endometrial neuroendocrine tumors. One case demonstrated a partial response, while a second patient exhibited a progression of the disease [6,17]. Astatine-211-labeled octreotide (somatostatin analog) has been described as a potential radiotherapeutic agent for neuroendocrine lung tumors with promising results [18].

Radiotherapy is also used by other authors as adjuvant treatment for LCNEC, 7 of the 16 patients treated with radiotherapy, 3 survived > 12 months and 4 lived without disease relapse [1].

No prognosis data is available for LCNEC of the endometrium. Even for early stages appears to have an aggressive course with a strong propensity for distance mestastasis and rapid recurrence [12]. Of the 17 cases described in literature, including our case, 11 were stage 3 or 4 at diagnosis, 8 patients died between 1-19 months (mean 10) after diagnosis and 9 remain alive; two of them with a recurrence or persistence. In all cases, follow up is short (less two years).

Endometrial LCNEC is a very rare endometrial tumor with poor prognosis and represents a challenge in the clinical practice. Adjuvant therapy with chemotherapy and/or radiotherapy appears to improve survival rates. Cytoreductive surgery including; hysterectomy bilateral salpingo-oophorectomy, and debulking of affected pelvic or paraaortic lymphnodes is the most common surgical treatment. PET/TAC is usefull in the management of these aggressive tumors. More studies are needed to establish more efficient models of treatment to improve the survival rates of endometrium LCNEC.