1Faculty of Biology, Medicine and Health, University of Manchester, UK

2Department of Biochemistry and Molecular Biology, Faculty of Medicine, University of Tripoli, Libya

4Department of Obstetrics and Gynaecology, Faculty of Medicine, University of Tripoli, Libya

Despite the relative abundance of sunny weather, surprisingly, there is increasing evidence that vitamin D deficiency is extremely prevalent in females of reproductive age in Middle East countries. There is also increasing interest in the non-classical roles of vitamin in health and disease including its relation to incidence of gestational diabetes, its impact on glycaemic control in diabetes mellitus, and its association with some complications of pregnancy like preeclampsia. The objective of this study was to estimate the prevalence of Vitamin D deficiency in pregnant diabetic patients in west Libya and analyse potential links to socioeconomic and cultural factors. This is a cross sectional observational study. Random plasma was collected form expected mothers attending the Antenatal Diabetes Clinic at Tripoli’s Main Maternity Hospital. Demographics and socioeconomic and cultural factors were recorded at the same time. Samples were analysed for vitamin D level and biochemical screening panel. Vitamin D level was obtained from 160 patients (mean age 35 years). Over all 95 % of the study population had vitamin D levels below normal (defined as vitamin D level of < 20 ng/mL). Results were subcategorised into severe deficiency (<10 ng/ml, 51.9%-83 patients), deficiency (< 20 ng/mL, 43.1%, 69 patients), insufficiency (20 - 30 ng/ml, 3.8%, 6 patients) and sufficient (> 30 ng/ml, only 1.3%, 2 patients). All patients were taking daily vitamin D Supplements at a dose of 400 IU as per hospital policy. Vitamin D deficiency is extremely prevalent in pregnant diabetic patients in Libya. There is no clear association with socioeconomic risk factors like employment, type of accommodation or geographic distribution. However, most of the study population had life style characterized by minimal exposure to direct sun light. Routine supplementation of Vitamin D in doses of 400 IU/day does not appear to ameliorate the severity of vitamin D deficiency in this group.

The Middle East weather is known for its moderate temperature and long periods of sunshine which gives abundant opportunities for outdoor activities and sunlight exposure, the main source of vitamin D. However, there is growing evidence that vitamin D deficiency is very prevalent, especially in females of child bearing age [1, 2]. The aetiology of this is likely to be multifactorial and could be related in part to life style choices like active sunlight avoidance to maintain pale skin colour, religious dress codes (Hijab, scarfs) and limited opportunities for outdoor activities [3].

The last decade was marked by increasing interest in studying the “non-classical” roles of vitamin D. A growing body of evidence suggests that vitamin D may have important role in; immunity and inflammatory response to infections especially granulomatous diseases like tuberculosis [5], reduction of incidence of cancer [6], glucose homeostasis in type II diabetes mellitus [7], and cardiovascular disease [8]. Vitamin D deficiency has also been implicated as a potential etiological factor in inflammatory bowel disease, multiple sclerosis [9], and accelerated decline in cognitive functions [10].

Cochrane systematic review published in 2016 indicated that vitamin D supplementation could reduce the risk of pre-eclampsia and increase length and head circumference at birth [16]. Similar conclusions were drawn on other systematic reviews [17]. In many antenatal clinics, including the Antenatal Diabetes Clinic at Aljala Hospital, it has been routine practice to advice pregnant mothers to take 400 IU vitamin D as daily supplement. While this dose may be sufficient as supplement to ensure adequate levels in mothers with no pre-existing deficiency, this dose is not adequate for replacement in patients with overt vitamin D deficiency [18].

Vitamin D epidemiological data is very limited in Libya. We conducted this study to try to quantify the problem in one of the most vulnerable groups, pregnant diabetics given that 3 risk factors are linked to this group namely, known high prevalence of deficiency in females of child bearing age, increased risk of gestational diabetes and poor glycaemic control and increased incidence of pregnancy complications in vitamin D deficiency state. We have also attempted to try to understand socioeconomic factors and life style choices and their influence on vitamin D level and lastly we examined the effect of vitamin D routine supplement on vitamin D levels.

The study was conducted in accordance with the international guidelines laid down in the Declaration of Helsinki [19]. All subjects gave their informed consent for their participation in this study. The clinical team was blinded to the result and all patients received the standard care as per clinic policies and protocols.

The target study population of this study was the attendees of the Antenatal Diabetes clinic at the main maternity hospital in Tripoli (Aljala Hospital) which has a catchment area that covers most of West Libya including the capital Tripoli. Patients were recruited at random in any trimester of pregnancy. Patients with pre-existing diagnosis of vitamin D deficiency were excluded. We also excluded patients with known malabsorption, stage 4&5 Chronic Kidney Disease and patients on therapeutic doses of Vitamin D. 160 patients aged between 18- 46 participated in the study.

Information about demographic characteristics, life style choices, socioeconomic status were collected by one member of the research team through interview and completion of predesigned questionnaire.

After detailed consenting process, venous blood was collected into 10ml serum separator tube (BD Vacutainer-Becton Dickenson) with clot activator. All samples were centrifuged at room temperature at 3000 rpm for 10 minutes, immediately after that all samples were divided into 3 Eppendorf tubes. 25 (OH) vitamin D concentrations were measured on ARCHITECTi1000sr immunoassay (Abbott Diagnostics, USA) 20. The device was regularly calibrated as per the manufacturer standards. Data were managed and analysed by SPSS version 22. Descriptive study and inferential statistics are used. A p value < 0.05 was considered as significant.

On subgroup analysis based on cultural habits and risk factors, there were no significant differences in the incidence of vitamin D deficiency in subgroups based on age, gestational age, gravity, parity, type of diabetes, effectiveness of diabetic control, presence of chronic medical conditions other than diabetes, skin colour, dressing style, use of sun screen, life style and exercise. 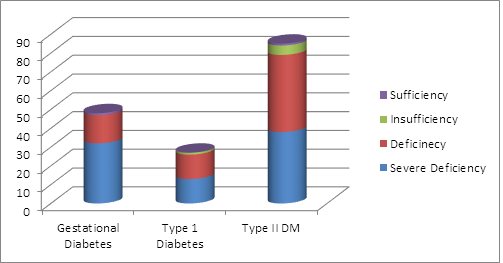 Figure 1: Vitamin deficiency pattern according to type of Diabetes mellitus

Diabetic control did not seem to be associated with any level of vitamin status in this group, P 0.89. Only two participants had Chronic Kidney Disease (CKD1-2) While 22.5% had thyroid dysfunction which was not associated with increased risk of vitamin deficiency.

Non-of the participants was known with existing gestational problem. In multigravidas, 66.9% of them had history of complication in previous pregnancy and 58.8% had history of previous neonatal complication. 45% of the participants were in their third Trimester, 38.8% in the second trimester and 16.3% in the first trimester. 89.4% were multigravida and 10.6% were primigravida. There was tendency for higher incidence of severe deficiency in the 3rd trimester in comparison with 1st and 2nd however this difference did not reach statistical significance in this study population (Figure 2). 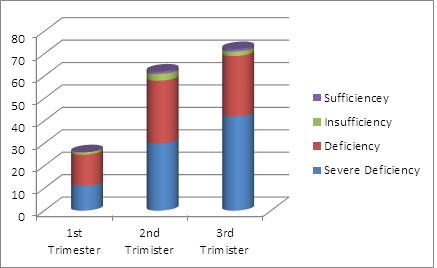 Likewise, multigravida participants had higher incidence of severe vitamin D deficiency in comparison with primigravida (53.8% vs 35.3%) but this did not reach statistical significance, P 0.11. 81.9% of women reported regular intake of milk and dairy product while 3.1% did not eat dairy products at all. Only 37.5% of participants reported regular inclusion of fish and/or fish oil in their diet while 86.3 % consumed meat and liver on regular basis. 146 of participants were of white skin colour while 14 were black. 91.6% of white women had severe vitamin D deficiency. The description of white skin colour included all the categories of skin tone in Fitzpatrick scale except dark brown (grade VI) which was considered black. There was no statistical difference in the incidence of severe vitamin D deficiency between the 2 groups.

Only minority of participants (4/160) reported that they spend most of the day time outdoors (e.g. working in farm or sports teacher), none of them had severe deficiency but all had deficiency (vitamin D 10-20 ng/ml). There was no statistical difference between the 3 groups (mostly indoors, part outdoors, mostly outdoors. P 0.15). 64.4% of participants reported they were not engaged in any regular exercise. Only 19.4 % of women reported regular use of sunscreen. 90% wore scarf and 10% wore full body cover including vail. This is for cultural and religious reasons therefore skin is insulated from exposure to sunlight most of the time in all participants.

There has been a growing interest over the last decade in the role of vitamin D in health especially its non-classical role. In the context of pregnancy, vitamin D deficiency has been implicated as contributing factor to multiple complications. Good vitamin D levels are also important in maintaining good diabetic control.

For cultural and religious reasons, women of child bearing age in the Middle East tend to be minimally exposed to sun light. This is because of the religious code of full body cover sometimes including the face. Even ladies who do not cover the face as part of the religious dress code, they tend to avoid sun exposure as pale skin tone is more desirable as opposed to tanned skin in western society [21, 22]. For this reason diabetic pregnant women are one of the most vulnerable groups for vitamin D Deficiency in the Middle East. In this cross sectional observational study we examined the level of vitamin D in 160 randomly selected sample of pregnant diabetic patients attending the antenatal diabetes clinic at AlJala Obstetrics and Gynaecology Hospital in Tripoli.

Although the generally accepted measure of vitamin D status is circulating 25(OH)D concentration, there is little consensus on which assay method should be used and what are the cut points for normal and abnormal ranges [23]. In this study, we used ARCHITECTi1000sr immunoassay (Abbott Diagnostics, USA). We also defined deficiency as vitamin D level of < 20 ng/ml and severe deficiency as level of < 10 ng/ml. A level of 20 – 30 ng/ml was considered insufficiency while a level of > 30 ng/ml is considered sufficient level. These cut points are widely used in the American literature although some authorities consider normal is a level above 40 or 50 ng/ml [24].

In this study we could not find any significant associations in subgroup analysis based on age, parity, and gestational age, and gravity, type of diabetes, diabetic control, skin colour, dress code and life style. We think this was related partly to the sample size as the study was not designed to detect difference in these groups but merely to estimate the total prevalence and describe demographic and risk factors characteristics. The other reason for lack of differences in these subgroups is the extremely high incidence of deficiency in all categories. We have not analysed skin colour into detailed subgroups but we suspect that most of the Libyan population are of brown tone within the range of Fitzpatrick scale of II-V therefore are at higher risk of vitamin D deficiency. All participants were not exposed to sun light in any significant time due to dress code, life style and cultural choices of protecting skin to maintain paler tone. Although this was not evident in this study but we think these factors are playing a major role in this widely prevalent deficiency status [25].

Although this group of patients were all taking vitamin D supplement of 400IU as per national recommendations, this level of supplementation did not appear to ameliorate their deficiency status.