4The Bucharest University of Economic Studies, The Faculty of Finance and Banking, Bucharest, Romania

Purpose/Aim/Objective: The purpose of this study was to investigate the neuropsychological modifications and intellectual functioning parameters (such as predictors of school performance – Intelligence quotient - IQ) of children with surgically corrected congenital heart defects. By investigating these changes, we might be able to develop a screening tool which facilitates the early detection of psychological distress, optimizes psychological therapy.

Methods: The study was conducted in the Paediatric Cardiology Clinic of Tîrgu Mure?, Romania, between 2016-2018, on 86 children with congenital heart disease (CHD), aged 6 to 17 years old, who have undergone surgical repair - compared to 102 healthy controls, matched by age. The study tested the hypothesis that children with CHD have lower intellectual function than the control group and analysed behavioural outcomes for these patients. Exclusion criteria: children aged less than 6 years old, confirmed genetic syndromes and a family history of psychiatric disorders.

Results: 59.3% of children in the eligible group were male, with a median age of 11.1 years ± 3.2 SD. The average IQ of the patients with cyanotic CHD was 84.09, while the control group had an average IQ of 91.10. Analysis of the psychological profile indicated that 33.7% of children with surgically corrected CHD had anxiety, and 11.6% of them had attention deficit disorder.

Conclusions: Children with surgically corrected cyanotic CHD had a lower IQ than the control group. Anxiety and attention deficit disorder were more frequent in children with CHD.

The prevalence at birth of congenital heart diseases (CHD) has a varied geographical distribution, ranging from 9,3/1000 live births in Asia to 1,5/1000 in Africa and the high impact of morbidity and mortality at all stages of life is a major public health problem [1, 2]. Advances in prenatal and postnatal diagnosis, improved surgical techniques and the introduction of hybrid approaches have resulted in important decreased of the operative mortality in the past few decades [2-5]. Many children with complex CHD have neurodevelopmental and neuropsychological impairments and the impact on their quality of life is very important.Studies on the correlation between CHD and the neuropsychological behaviour of patients are currently being conducted throughout the world in order to obtain the most accurate results that are useful for developing strategies, planning early and multilevel approach for the best social integration [6-8].

Participants were recruited from a tertiary paediatric heart centre in Tîrgu Mures, Romania over a period of three years (2016-2018). 86 children, aged between 6 and 18 years old, who underwent surgical repair for CHD during this period were compared to 102 healthy controls. To obtain the study group, a sampling formula depending on the prevalence of CHD in Europe was used. The study group and the control group were matched by age. The primary outcome of the study was to test the hypothesis that children with CHD have reduced intellectual functioning (for example, the best predictor of school performance: IQ) when compared to a healthy population, and that the severity of CHD correlates with the degree of intellectual impairment. The secondary outcome was to analyse the behavioural patterns of children with surgically corrected CHD. Eligibility criteria: patients aged between 6 and 18 years-old with surgically corrected CHD, without any previous psychological evaluation. Exclusion criteria: patients younger than 6 years old, with confirmed genetic syndromes and/or psychiatric disorders in personal or family history.

The odds ratio were computed to identify if children with operated CHD have different behaviour patterns compared to children belonging to the control group. The analysis was conducted based on age, sex and severity of CHD. The results were estimated considering a 95% confidence level. When situations with lack of significance and lack of computation appeared, the conclusion was extracted based on 95% statistical significant confidence level (CI does not include 1) if found relevant. Three categories were considered: 1) the externalizing behaviour, comprising attention deficit, behaviour disorders; 2) the anxiety and 3) the depression.

The study group included 86 subjects, of which 59.3% male, divided as follows: 24 into the mild non-cyanotic category, 18 into the moderate non-cyanotic category and 44 into the cyanotic category. Median age was 11.1 years ± 3.2 SD. The Anova and the Bonferroni Correction tests were applied to analyse the IQ of the children in the control group and the IQ of the three risk models. One of the hypotheses of this study asserts that children with cyanotic CHD would have a lower IQ, and consequently lower school yield, compared to others (control group or the mild and moderate non-cyanotic). The results indicated that the mean IQ value in children with cyanotic CHD was 84.09, compared to the control group, with a mean IQ score of 91.10 (p= 0.045) (Figure 1), also considering the confidence intervals for the mean IQ scores (Table 1). When compared the IQ scores of children corresponding to the NYHA classes, no statistically significant difference was observed (p=0.95) (Figure 2). A chi-square test was used to analyse the psychological profile for the study group. Data suggested that 33.7% of children with CHD had anxiety and 11.6% had attention deficit disorders, compared to the control group (p=0.0001) (Figure 3). Analysing the three risk models in the study group appears that anxiety was similar in children with mild non-cyanotic defects (37.5%) and cyanotic CHD (35.6%) (Table 2). One of the hypotheses that could not be confirmed is the assumption that the female gender is more prone to neuropsychological disorders than male subjects (p=0.17 and p=0.84) (Figure 4 and 5). 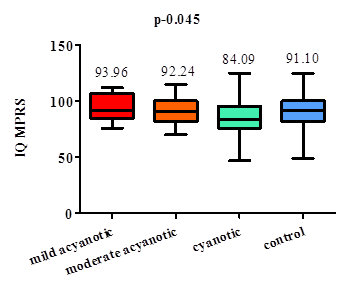 Figure 1: The mean IQ scores for control group and the risk models.

Tabel 1: The confidence intervals of the mean IQ for the studied groups. 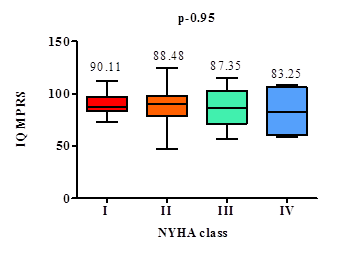 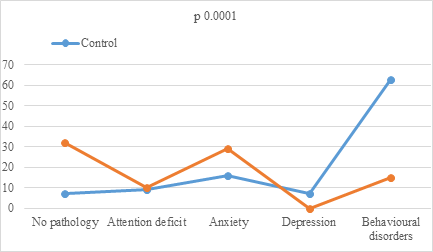 Figure 3: Comparison between the control group and the study group, according to psychological profile.

Table 2: The psychological profile for the control group and the three subgroups of study batch. 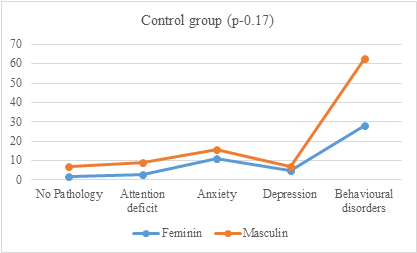 Figure 4: Correlation between sex and psychological profile in the control group (p-0.17). 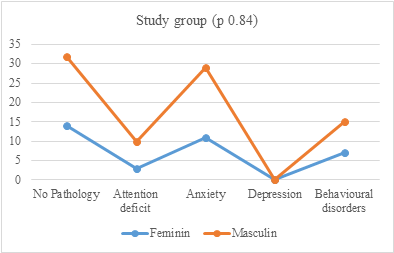 Figure 5: Correlation between sex and psychological profile in the study group (p-0.84).

The clinical relevance of the impact of operated CHD on neuropsychological development is helpful in everyday practice. IQ measurement is required for psychoeducational assessment, being an adequate predictor of difficulties in adapting to the school system. Focused studies have shown suboptimal values and the need of special educational programs for children with surgically corrected CHD [10-12]. Among factors that influence IQ score are biological parental IQ, parental social status, medical conditions and how each factor participates is debatable. Generally, patients with CHD are at risk for developmental disorders, this risk is multifactorial and probably synergistic [13-15]. In our study, the mean IQ score of children undergoing surgery due to cyanotic CHD was below average (84.09), lower than IQ scores in the control group (p=0.045). Statistical correlation between IQ score and NYHA class did not yield a significant result (p=0.95). Studies focused on possible factors involved in the impaired cognitive development of children with severe CHD have shown the role of reduced cerebral perfusion before and after surgery, prolonged hypoxia, exposure to anesthesia and repeated surgical interventions [15-18]. Pizarro C. et al. did not identify a clear correlation between the utilized surgical techniques and children’s intellectual functioning [19]. In their study on 228 Swedish children with CHD, treated either by a surgical or an endovascular approach, Ryberg C. et al. had similar results on overall intellectual functioning [20]. Anxiety disorder is generally described in children with chronic conditions because of exposure to stress caused by frequent hospitalization, and the physical limitations imposed by the illness itself. The outcome/ consequences of these disorders are the tendency for isolation and a sense of being rejected by their peers [21]. Johnson B, showed that children with CHD have more behavioural problems compared to their healthy counterparts [22]. Analysis of the psychological and emotional profile of patients included in our study showed that 33.7% of children with operated CHD had anxiety, compared to the control group where anxiety was present in 15.7% of the cases (p=0.0001) and 11.6% of children in the study group had attention deficits. On the other hand, the odds ratios revealed that both boys and girls from the control group, aged 6 to 10 years old, and 11 to 14 years old respectively, are more likely to have an externalizing behaviour than children with cyanotic CHD, matched by age and sex. Subgroup analysis revealed that the frequency of anxiety was similar among children with mild non-cyanotic defects (37.5%) and cyanotic models (35.6%), meaning that the cardiac condition is a trigger for anxiety, especially for moderate non-cyanotic boys 6 to 10 years old. Correlation of NYHA class severity (as a distress trigger due to the inability to participate in intensive physical activities), of IQ and of psychological and emotional disorders did not appear statistically significant (p=0.10). Behavioural disorders were more frequent in the control group (61.8%). Adolescence has been described as a particularly vulnerable period for children with CHD, and has been associated with a higher risk of developing psychological and emotional disorders [23-26]. In our study anxiety and attention deficits are more frequently encountered in the age group of 6-10 years old (p=0.042) and the lack of specialized intervention for this age group will aggravate the disorder. It is accepted that there is a need for the adequate assessment and neuropsychological care of children with CHD based on risk categories, in order to develop an Individualized Education Program which improves the quality of life of these patients.

Study limitations: a relatively small cohort, but comprising all patients in the central part of Romania (exhaustive research). A limitation of the study is the lack of correlation of IQ score with parental social status or parental IQ score, or correlation of age at the time of surgery and IQ score or psychological and emotional changes.

The authors thank Anca Gherasim for her careful psychological assessment.