4The Centre for Disease Prevention and Control of Latvia, Riga

Materials and Methods: Descriptive retrospective study of children who were admitted to the PICU in Latvia from January 2012 to December 2016. Data on episodes were obtained from the Children's Clinical University Hospital electronic health records. Pediatric Index of Mortality (PIM2) was used for risk adjustment and calculation of standardized mortality ratio (SMR). The data were compared among the six regions of Latvia - Kurzeme, Latgale, Pieriga, Riga, Vidzeme, and Zemgale.

Conclusions: We noted excess mortality (SMR >1) in the population of critically ill children in Latvia, 2012-2016; in particular, in patients from two regions - Riga and Latgale.

Latvia is a Northern European country with a population size of 1.97 million, of which about 354,000 are children less than 18 [1]. Over the last 25 years, the under-five mortality rate in Latvia has decreased from 21 to 4.8 per 1,000 live births; however, it still remains one of the highest in the European Union [2, 3]. Latvia’s National Health Service healthcare system has a hospital network consisting of three tertiary university hospitals, seven regional hospitals where multidisciplinary subspecialty care is available, twelve local hospitals and ten specialized hospitals providing only single subspecialty care (e.g. orthopedics, obstetrics, psychiatry etc.) [4]. Of the three university hospitals, one is a dedicated children’s hospital where all children needing pediatric subspecialist care are transferred, including critical care. The only national PICU admits all critically ill children that are older than 1 month and younger than 18 years from all regions of Latvia (>700 children a year) [5]. In Latvia any child who requires continuous cardiopulmonary monitoring is considered a candidate for PICU admission.

The territory of Latvia is divided into 6 regions, consisting of counties and cities. Following the completion of administrative territorial reform in 2009, Latvia has Riga (the capital city), Pieriga (central Latvia surrounding the capital), Vidzeme (North-East), Latgale (South-East), Zemgale (South), and Kurzeme (West) regions (Figure 1A). The aim of this study was to investigate regional differences in the admission prevalence, mortality and interventions for pediatric critical illness in Latvia over a five-year period. 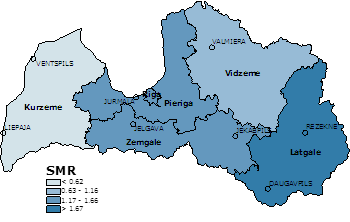 Figure 1A: Calculated SMR and the geographic location of the regions of Latvia. 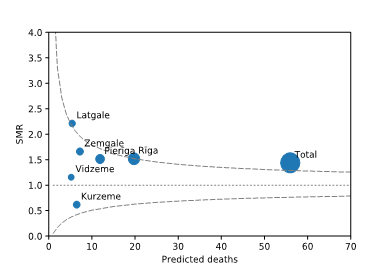 Figure 1B: SMR according to predicted number of deaths in the regions of Latvia. Dashed lines represent 95% CI for SMR of 1.0. SMR - standardized mortality ratio; CI - confidence interval.

This was a descriptive retrospective study. The study protocol was approved by Riga Stradins University Ethics Committee (No 24 / 27.04.2017.) and Children’s Clinical University Hospital (BKUS-3/2017). All children between the ages of 1 month and 18 years who were admitted to Children’s Clinical University Hospital Intensive Care Unit between January 2012 and December 2016 were included in this study. In Latvia children younger than 1 month regardless of diagnosis are admitted to the neonatal intensive care unit and were excluded.

The population data were obtained from The Centre for Disease Prevention and Control of Latvia. Population data at the beginning of 2016 were used as denominator (Table 1).

Table 1: Demographics and characteristics of pediatric critical illness among the regions of Latvia.

Pediatric Index of Mortality (PIM2) score was used for risk adjustment and standardized mortality ratio calculation [6]. PIM2 is a mortality risk prediction tool which considers data on the type of admission (elective or emergency), low-risk or high-risk diagnosis, mechanical ventilation, blood pressure, blood gas, and pupillary examination data within the first hour of admission to the PICU. SMR is a recognized indicator of critical care quality. SMR was calculated as a ratio of the observed PICU mortality and mortality predicted by PIM2. An SMR >1 means that observed mortality is higher than expected [7]. 95% confidence intervals (CI) were calculated by using Mid-P test in SMR Analysis v4.11.19 on-line tool [8].

ArcGIS 10.5.1 (Esri, US) software was used for data visualization on maps.

Hospital electronic health records returned 3709 admissions to intensive care, 40 (1%) were excluded because of missing, incomplete or conflicting clinical data, 18 (0.5%) patients could not be assigned to a region, i.e. missing address or not residents of Latvia. The final analysis included 3651 intensive care episodes of 2903 individual patients, a mean of 730 episodes per year.

a - Pediatric Index of Mortality 2; b - Standardized mortality ratio

Pediatric intensive care is a low-volume, high cost specialty with a primary goal of lowering mortality of children with reversible critical illness whilst optimizing functional outcomes [9]. Description of the epidemiology of critical illness allows for planning of bed numbers and staffing, thus meeting the demand for this expensive resource cost-effectively and safely. Furthermore, regional factors are crucial in planning specialized transfer of these children in a timely manner. This is the first study that assessed differences in incidence and mortality of pediatric critical illness across the regions of Latvia.

Average admission prevalence of pediatric critical illness in Latvia during January 2012 to December 2016 was 206 per 100,000 children (<18 years) per year. The rate of PICU admissions in the United Kingdom (UK) and Ireland was similar with 150 per 100,000 children <16 per year [10]. Our observed crude PICU mortality was low (average mortality rate 2.2%) and was lower than reported elsewhere - 3.4% in the PICANet registry in the UK and Ireland [10], 5.8% in a Europe-wide study [11], 6.4- 10.3% in the PICUs in Egypt [12]. A five-year retrospective cohort study by McCrory and colleagues showed a very similar crude PICU mortality in the United States of 2.3% [13]. However, mortality in the intensive care unit depends on the severity of illness and the patient population analyzed. Risk adjustment scores allow for inter- and intra- unit mortality comparison over time [14]. For this reason, we used the PIM2 score and standardized mortality ratio (SMR). There was excess mortality in the whole population and in two regions in particular - Riga and Latgale.

Another important finding of this study is that only a small proportion of children died in the PICU in Latvia (9.9%). This proportion is lower than in the UK, where about 15% children die in the PICU [10]. Moreover, in 2016 of all pediatric deaths (28 days to 14 years) in Latvia, 56% were out-of-hospital, with most out-of-hospital deaths caused by accidents (The Centre for Disease Prevention and Control of Latvia; data given upon request); in comparison in the UK in the same age group only 20% deaths were out-of-hospital [15]. The delay in reaching hospital care may be a significant factor why we observed excess mortality in this study. Mechanical ventilation is one of the most common procedures performed in PICU. According to Khemani and colleagues in the United States 30% to 64% of admitted patients require ventilatory support [16], in the UK and Ireland about 65% [10], while in a study in India about 16% of patients received mechanical ventilation [17]. In our study the proportion of mechanically ventilated patients was only from 24% to 29%. This can be explained by the fact that in Children’s Clinical University Hospital there are no high-dependency or step-down units, hence most patients requiring telemetry are admitted to the PICU.

This was a retrospective study. The main limitation of this fact is that we could not retrieve all information necessary for calculation of PIM2 in all patients. Missing variables in this risk prediction model are assumed to be normal and lead to lower estimated mortality risk. This study led to the establishment of prospective PICU registry in Latvia [5], which will allow prospective validation of these findings. Some children >1 month died in the NICU, which leads to lower proportion of PICU deaths, even though these children were receiving intensive care. We were unable to adjust for this; however, we know that this number is small.

While the childhood mortality in Latvia is declining, still it remains one of the highest in the European Union. We evaluated the main indicators of the PICU epidemiology and compared them among different regions of Latvia. We found higher than predicted PICU mortality in Latvia. This study raises the question and need to investigate why regional differences in pediatric critical care in Latvia exist.

The authors would like to thank medical student Viktoria Schaeff and Drs. Anete Paula Perova, Valdis Skotelis and Janis Kolbergs for help with the data collection and Dr. Roger Parslow for statistical advice and critical reading of the manuscript.

Conflicts of Interest and Source of Funding