The Clinical Heterogenicity and the Diagnostic Challenges of Idiopathic Inflammatory Myopathies

Objective: The idiopathic inflammatory myopathies (IIMs) are a heterogeneous group of disorders. Determining the diagnosis of the specific type of IIM based on the current diagnostic criteria correlate poorly with the clinical course and outcomes. New and more accurate classification criteria are needed.

Methods: Five cases of IIM who were followed at the rheumatology division at Galilee Medical Center between 2017 and 2019. The data was retrospectively extracted from the hospital electronical medical record

The idiopathic inflammatory myopathies (IIMs) are a heterogeneous group of disorders characterized by muscle weakness, elevated serum creatine kinase (CK) and the presence of typical inflammation in muscle biopsy [1]. The inflammatory process frequently affects other organs including the skin, joints, lungs, gastrointestinal tract and the heart [2]. The clinical presentation and the magnitude of organ involvement vary considerably among patients diagnosed with IIMs. Previously, the IIMs were diagnosed on the basis of muscle weakness, skin findings and tissue biopsy as well as electromyography (EMG). The different IIMs were classified into dermatomyositis (DM), polymyositis (PM), inclusion body myositis (IBM) and immune-mediated necrotizing myopathy (IMNM) [3]. Overtime and based on clinical observations, two distinct clinical entities within the group of IIMs were identified and added to the classification; antisynthetase syndrome (ASS) and amyopathic dermatomyositis [3]. Due to the rarity of IIMs, only a few randomized clinical trials are available to guide the treatment decisions [4]. Currently, there are several available treatments for IIMs but none are specific [4]. The management of IIM is further complicated by the extramuscular manifestations, such as interstitial lung disease and arthritis. The rarity of IIMs, lack of targeted and tailored treatments and the heterogeneity of the clinical presentation pose significant challenges to our ability to predict clinical response to treatment and to determine prognosis [4]. The objective of our case series is to share our experience and emphasize the need for better classification system.

Muscle biopsy demonstrated inflammatory myopathy consistent with DM. She was diagnosed with DM and high dose of corticosteroid therapy was initiated in combination with hydroxychloroquine, topical creams and anti-histamines. The patient showed a mild improvement in her muscle weakness and skin rash. A decline in CK levels to 215 U/L was observed. She was later discharged. One month later the patient was readmitted with progressive muscle weakness. On admission the CK levels were 197 U/L. She underwent an abdominal computed tomography (CT) scan that demonstrated ovarian lesions involving both ovaries with peritoneal spread. Omental biopsy was performed and the results were consistent with ovarian carcinoma. The patient underwent total abdominal hysterectomy (TAH), bilateral salpingo-oophorectomy (BSO) and omentectomy. Adjuvant chemotherapy was given after surgery. Several months after the initiation of chemotherapy, the patient's muscle weakness resolved completely and the patient regained her full muscle strength. 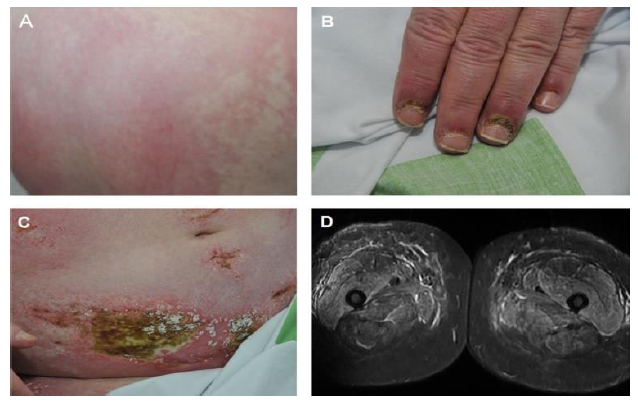 Eighty-year-old female was diagnosed with PM prior to her visit at our clinic. The diagnosis of her PM was made based on progressive proximal muscle weakness affecting the lower extremities, elevated CK levels and typical inflammatory myopathy consistent with PM demonstrated on MRI. Electromyography (EMG) and muscle biopsy didn't reveal an inflammation, necrosis or atrophy of the muscle. Malignancy work-up including colonoscopy and total body CT scan was unrevealing. She was initially treated with high dose systemic corticosteroids in combination with different disease modifying anti-rheumatic drugs (DMARDs) including azathioprine, methotrexate (MTX) and cyclosporine. The response to these treatments was partial and resulted in mild reduction in her muscle weakness and CK levels. All DMARDs were discontinued overtime due to side effects. We initiated treatment with monthly low dose (30 grams) of intravenous immunoglobulins (IVIG) combined with tacrolimus. This regimen led to complete remission; she regained her muscle strength with normalization of her CK levels.

48-year-old female presented to our clinic with weakness and pain in her shoulder and thigh muscles. Review of systems was significant for dry eyes and mouth as well as symmetric arthralgia affecting mainly the small joints of her hands. In physical examination a proximal muscle weakness involving the upper and lower extremities was noted as well as arthritis involving the small joints of her hands. Laboratory workup was significant for elevation in CK levels (498 U/L). Anti-nuclear (ANA), anti-Cyclic Citrullinated Peptide (CCP), anti-Jo1 and anti-Sjögren’s-syndrome-related antigen A (anti-SSA) were positive. MRI revealed an inflammation in the muscles of the hips (Figure 2). The patient was diagnosed with overlap connective tissue disease of anti-synthetase syndrome, rheumatoid arthritis and Sjögren syndrome. She was initially treated with high dose systemic corticosteroids in combination with hydroxychloroquine and MTX. Due to incomplete response and the persistence of proximal muscle weakness treatment with abatacept was initiated and led to marked improvement in her muscle strength, arthritis and sicca symptoms with associated normalization of her CK levels and overtime enabled successful tapering of her systemic corticosteroids.

A 40 year-old male, without prior medical history, presented with skin rash compatible with DM, mechanic hands, proximal muscle weakness and peripheral arthritis. The muscle weakness progressed over a period of few months and led to severe disability interfering with activities of daily living. His laboratory workup was notable for markedly elevated CK levels with positive Anti-Jo1 and ANA in high titers. Muscle biopsy of the quadriceps muscle demonstrated minimal signs of inflammation. MRI of the lower extremities documented bilateral inflammatory myopathy mainly involving the iliopsoas and gluteus muscles (Figure 3). High resolution CT of the chest demonstrated interstitial lung disease compatible with nonspecific interstitial pneumonia (NSIP). Pulmonary function tests showed restrictive disease pattern with low lung volumes and diffusion capacity. Because of the muscle weakness, skin rash, mechanic hands, interstitial lung disease and positivity to Anti-Jo1, he was diagnosed with AAS. Work-up for underlying malignancy was unrevealing. He was initially treated with pulse corticosteroid therapy (methylprednisolone one gram per day for three consecutive days) and cyclophosphamide. Intravenous immunoglobulin (IVIG) was added to the treatment. After three months of treatment the patient didn't improve with progressive muscle weakness and persistent elevation in his CK levels. Cyclophosphamide was discontinued and treatment with rituximab was initiated. Three months later, a mild improvement in muscle strength was noted. The effects of rituximab treatment weaned off over a period of two years even when tacrolimus was added as a maintenance therapy, and eventually was discontinued. We then decided to initiate treatment with intravenous tocilizumab. No improvement was demonstrated after 3 months of monthly tocilizumab infusions. Currently, an autologous bone marrow transplantation is being considered with the patient. 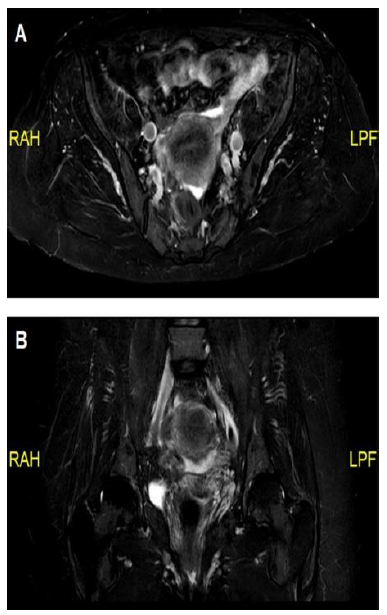 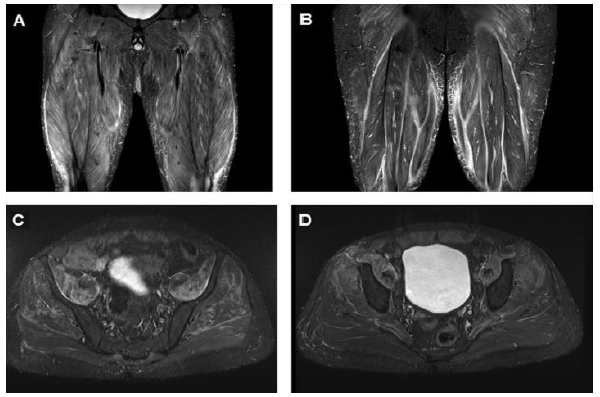 A 50-year-old male presented with dyspnea, cough and skin rash involving the hands without muscle weakness. Physical examination was notable for mechanical hands and gottron's papules. Lung exam was significant for decreased breath sounds at lung bases bilaterally with associated dry crackles. Preserved muscle strength was noted. CK levels were normal repeatdly; MRI of the arms and the thighs was negative for myositis. Serology was only positive for Anti-Jo1. CT scan of the lungs demonstrated interstitial lung disease and pulmonary function tests showed a moderate decline in diffusion capacity (DLCO) and forced vital capacity (FVC). The patient was diagnosed with Anti-synthetase syndrome. He was initially treated with high dose corticosteroids resulting in an improvement in the dyspnea, pulmonary function tests and the findings in imaging. Mycophenolate mofetil was added and corticosteroids were tapered off gradually.

In this case series, we presented five cases of patients diagnosed with IIMs who had heterogeneous clinical presentation and variable response to treatment even within the same classified type of IIM (table 1). We believe that some of this heterogeneity can be attributed to the current disease classification scheme. The classification criteria of IIMs has evolved greatly since Bohan and Peter proposed their original classification system in 1975 (Table 2) [5]. Their criteria had several limitations, including the exclusion of the IBM subgroup [3, 5]. Interestingly, interstitial lung disease (ILD) was not listed as one of the cardiopulmonary manifestations in the original criteria [3].

Later, Dalakas et al. proposed a new classification system, emphasizing the importance of muscle biopsy, which since became the gold standard for the diagnosis of IIMs. The critics of these criteria were concerned with the potential pitfalls of defining IIMs subsets based on biopsy alone [6]. Over the years new myositis specific (MSAs) and myositis associated autoantibodies (MAAs) were identified. The presence of specific antibodies was found to be associated with specific clinical phenotypes with implications on prognosis. Those antibodies are though to be helpful in identifying subsets of patients with similar disease features and response to treatment [3]. The discovery of these autoantibodies led to the proposal of a serologic diagnostic approach complementary to the Bohan and Peter IIM classification to better classify the IIMs based on clinical features, serology and muscle biopsy findings [7]. Currently, this classification criteria is limited by the low availability and high cost of the methods required for identification of these autoantibodies [5]. Even when the serologic work-up is available, a large number of patients are still considered "sero-negative" and remain undefined with respect to diagnosis, prognosis, and survival [5].

Because of these limitations, the EULAR (European league against rheumatism) and ACR (American college of rheumatology) developed a new classification system for IIMs based on a probability-score model (table 3). These criteria use a clinical (muscle weakness, extra-muscular manifestations and skin rash), laboratory (Anti-Jo1 and muscle enzymes) and muscle biopsy findings to generate an aggregated score. These criteria better define the IIMs and their subgroups and specifically improve the detection rates of amyopathic DM [3]. This classification system doesn't include the other MSA and MAA antibodies in the ranking model. We believe that MSA and MAA antibodies have a prognostic utility and should be incorporated in the criteria in order to increase the specificity and further define subgroups of IIMs with similar features. Moreover, the group of MSA and MAA-negative patients is still in need of better definition and classification.

Over the last few decades, our understanding of the IIM pathogenesis has greatly evolved [8-12]. New and novel biologic drugs have been applied in various rheumatic diseases and changed the clinical outcomes of many patients. Thus, many of these drugs have been used for treatment of IIM patients. However, defining the optimal treatment regimens for the IIMs has been difficult because of the rarity of these disorders, their highly complex clinical phenotypes and heterogeneity, and the limited number of randomized, double-blind clinical trials [13-15]. The current treatment recommendations are presented in figure 4. However, those recommendations are lacking as the treatment response remain variable among IIM patients. The 5 cases we presented demonstrate the heterogenous presentation and the variable response to treatment of the IIMs. As our understanding of the pathogenesis grows, we will probably be able to sub-classify patients based on the underlying specific and dominant pathogenic pathway and tailor the treatment accordingly. More research is needed to better classify the patients and tailoring the treatment.

The diagnosis of dermatomyositis is considered definite, probable and possible when skin rash is associated with 3, 2 or 1 muscular criteria, respectively.

Table 3: The EULAR-ACR classification criteria for adult and juvenile IIMs and their major subgroups [3]. 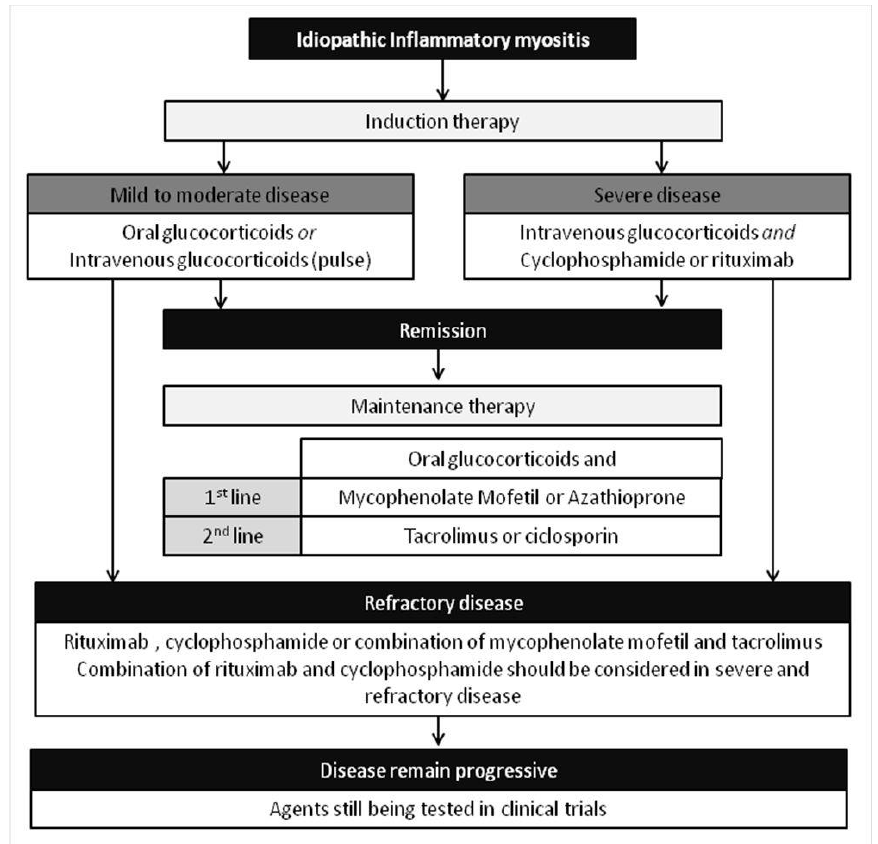 The authors do not have any conflicts of interest to declare.