Background: Gestational trophoblastic neoplasia (GTN) is a rare disease developing after normal or molar pregnancy. Clinical presentation can be heterogenous while early detection of GTN is crucial for treatment success. We report a rare case with vaginal location of placental site tumor (PSTT) after suction curettage of partial molar pregnancy.

Case Report: We report a 25 year-old gravida III, para I patient with partial molar pregnancy and following placental site tumor located at the left vaginal wall. The patient presented with heavy vaginal bleeding and persistent human chorionic gonadotropin (β-hCG) levels twenty-five days after suction curettage. Due to persistent β-hCG levels and histology report suggesting PSTT, chemotherapy with methotrexate (MTX) was started and lead to curation of the disease after 11 cycles of treatment.

Gestational trophoblastic neoplasia (GTN) is a malignant disorder caused by abnormal differentiation of throphoblasts including invasive mole, choriocarcinoma, placenta-site trophoblastic tumor (PSTT) and epitheloid trophoblastic tumors [1]. Incidence of GTN is reported from 1 per 40,000 to 1 per 100,000 pregnancies depending on the region with higher numbers in Asia compared to Europe or North America [2, 3]. PSTT is the rarest form of GTN developing from invasive intermediate gestational trophoblasts with approximately 200 reported cases worldwide [2, 4]. Clinical presentation contains abnormal vaginal bleeding or amenorrhea and elevated human chorionic gonadotropin (β-hCG) levels which are usually lower than β-hCG levels in choriocarcinoma (CC) or invasive mole [5]. In comparison to invasive mole and CC, responsiveness to chemotherapy is much lower in PSTT and therefore surgery is the recommended treatment with additional administration of adjuvant chemotherapy in metastatic cases [6, 7]. Most PSTT are found in the uterus, however, 30% of cases are reported to have metastatic lesions at first presentation [8]. Classification of GTN is recommended using FIGO anatomic staging system and prognostic scoring system considering various factors such as age, β-hCG levels, medical history and number of metastasis [9]. A FIGO prognostic score of lower or equal 6 indicates low-risk GTN and scores above 6 indicate high-risk GTN. Low-risk GTN patients are usually treated with single-agent chemotherapy using either methotrexate (MTX) or dactinomycin whereas five- and eight-day MTX treatment regimens are mostly first-line choice in Europe and North America. In contrast, high-risk GTN requires multiagent combination chemotherapy [10]. Clinical presentation can be uncharacteristic and early diagnosis as well as appropriate treatment can be challenging.

In August 2018, a 25-year-old woman, G3P1L1A1, (gravida III, para I, living 1, abortion 1) presented with abdominal pain and vaginal bleeding in her 5th week of gestation. Her last delivery was a vaginal delivery in 2014 with no complications and a regular history of menstrual cycle thereafter. Ultrasonography showed a gestational sac as well as a yolk sac. However, no fetal pole was detected. Additionally, there was an uncomplicated cyst measuring 37 × 28 mm and free fluid in the recto-uterine pouch. Within four days β-hCG levels were rising from 16.000 to 40.000 IE/l. After another week of follow-up, her β-hCG level was 652.998IE/l and sonography was suspicious for partial molar pregnancy. The patient underwent ultrasound guided suction curettage and histopathology reports confirmed a partial mole with residuals recommending further β-hCG follow-ups at discharge. Twenty-five days later, the patient presented at our emergency department with strong vaginal bleeding and persistent β-hCG levels with the need for curettage in addition to laparoscopic abdominal surgery in order to exclude extra-uterine gravidity. There was no bleeding ex utero and the repeated curettage did reveal physiological appearing endometrial tissue. Instead, surgery revealed a heavily bleeding spongy pregnancy material like tumor measuring 2.5 × 1.7 × 1.5 cm in diameter at the lower third of the left vaginal wall infiltrating not only the vaginal epithelium but also the subcutaneous layers. The material was removed successfully. Histology revealed no placental cells within the corpus uteri but partial molar pregnancy within the left vaginal wall in addition to suspicious decidua with atypical cell nuclei (Figure 1). 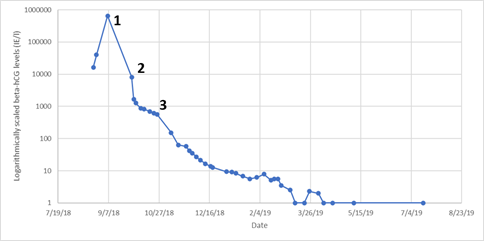 Material was found to be derived from the molar pregnancy a month earlier. Histological report and clinical presentation suggested PSTT (Figure 2). Due to lack of β-hCG level drop, MRT pelvis was performed which showed no sign of mass lesions or residuals. A CT chest showed three homogenous mass lesions suggesting benignity. An interdisciplinary tumor board meeting recommended treatment with single agent chemotherapy classifying the patient’s PSTT as FIGO stage IIA with low risk prognostic score of under 6: tumor extension to the vaginal wall by metastasis and persistent β-hCG levels between 103 and 104 IU/l lead to a FIGO risk score of 2. The patient was introduced to the possible treatment options of MTX or dactinomycin and decided to be started on MTX (50 mg) with folic acid (7.5 mg) supplementation. After an initial β-hCG drop due to one cycle of chemotherapy, the patient's serum levels of β-hCG were still persistent after six cycles of MTX. Alternative chemotherapy treatment options were declined by the patient and following another two courses of chemotherapy, β-hCG levels were back to normal. The patient received another three cycles and remained normal serum β-hCG levels up to today. The serum levels over time are shown in Figure 1. Repeated CT chest scans after five and seven months showed complete regression of the three mass lesions detected earlier. 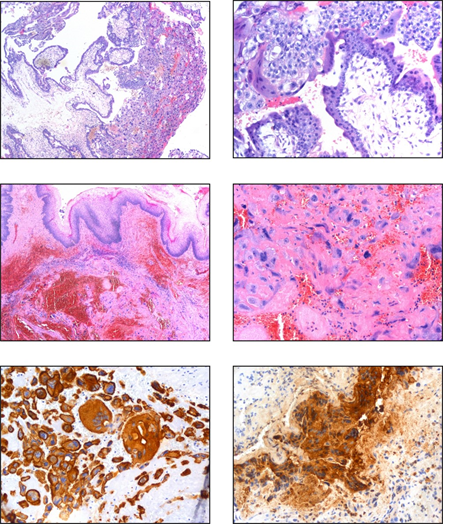 GTN describes a group of malignant tumors including invasive mole, CC, PSTT and epitheloid trophoblastic tumors. Distinguishing between these disorders is often difficult and therefore clinical and histopathological information needs to be combined. Despite the overall survival rate ranging from 95 to 100%, some GTN cases may end lethal [11, 12]. PSTT represents the rarest form of GTN accounting for 1-2% of all GTN [13], its malignant potential being first described in 1981 by Scully and Young [14]. PSTT usually derives from molar pregnancies but can occur after any gestation and at different time spans after pregnancy as well as at any reproductive age [8, 15]. Abnormal vaginal bleeding and β-hCG levels are common clinical features for these rare cases but clinical presentation can vary and multidisciplinary counseling is often necessary for accurate diagnosis. In PSTT, β-hCG levels are usually lower compared to invasive mole and CC with a median β-hCG serum level at diagnosis of PSTT is 132 IU/L [16]. However, there are reports of cases with higher serum β-hCG levels [17, 18]. GTN are classified into FIGO low-risk and high-risk categories but biological behavior of PSTT can vary. Surgery is the primary treatment while chemotherapy can be an option in certain cases depending on the FIGO scoring, persistent β-hCG levels and presence of metastasis. Low-risk PSTT are treated with single agent chemotherapy approaching cure rates of 100%: MTX is the one with most clinical experience and an additional good therapeutic index [19]. MTX is usually used as five- and eight-day regimens in combination with folic acid [20]. A Cochrane review suggested a higher likelihood of primary cure with Dactinomycin compared to MTX. However, Dactinomycin is associated with more side effects than MTX such as alopecia and nausea [21]. In addition, China uses 5-fluorouracil (5-FU) with reported effectiveness [22]. Combined chemotherapy protocols with or without radiation and surgery are required in high-risk PSTT reaching 80-90% cure rates [23]. Our patient underwent surgery and single agent chemotherapy with MTX recording to FIGO low-risk treatment protocol. After a long β-hCG plateau after six cylces of MTX), changing chemotherapy to Dactinomycin treatment was discussed but ultimately declined by the patient. After another two cycles of MTX β-hCG levels fell and remained below 2 IU/l. The patient received another three cycles of MTX and stayed remission free up to today.

PSTT is a rare form of GTN with a variety of clinical presentation. Therefore, diagnosis and optimal therapy are challenging. In our case, multidisciplinary counseling among clinicians and pathologists was essential in defining an accurate diagnosis. In addition, this case showed the importance of β-hCG level observation after partial molar pregnancy. With regards to accurate classification in terms of treatment strategies, pelvic and chest imaging are crucial. As there are several treatment options in single agent chemotherapy, further studies are necessary in order to optimize early diagnosis, treatment and outcome in patients with PSTT.