Myocarditis is an inflammation of the myocardium that can lead to necrosis and degeneration of myocytes. Viral myocarditis may affect children consequences. Complete atrioventricular block (CAVB) arise as a rare complication of acute myocarditis. Its occurrence in infants and children is uncommon, but can lead to serious complications. In this case report, we present a 29-month-old male, previously healthy, with a picture of acute myocarditis associated initially with junctional tachyarrhythmia that progressed later to persistent CAVB needing permanent pacemaker insertion.

Myocarditis is an inflammation of the myocardium that can lead to necrosis and degeneration of myocytes. Clinical manifestations of acute myocarditis can range from mild symptoms with minimal myocardial dysfunction to fulminant forms of acute congestive heart failure and shock. Complete atrioventricular block (CAVB) arise as a rare consequence of acute myocarditis [1]. Its occurrence in infants and children is uncommon but can lead to serious

This is a case of a 29-month-old male who presented with abdominal pain, tachycardia and moderate respiratory distress associated with right pleural effusion and mild pericardial effusion (Figure 1A). He was admitted to pediatric cardiac ICU due to acute myocarditis leading to cardiogenic shock. His blood and pleural fluid serology investigations confirmed Human Enterovirus (HEV). He required non-invasive positive pressure ventilation and pleurocentesis. His initial cardiac rhythm showed junctional tachycardia (Figure 2A). Initial echocardiography assessment demonstrated dilated left ventricle with poor cardiac contractility and depressed function with normal structure heart (Ejection Fraction: 21%, Shortening fraction: 13%). His Troponin-I level was markedly elevated reaching maximum level at 48 hours after admission (7562, reference range <34.0 pg/ml). He was managed in ICU with milrinone infusion, intravenous immunoglobulin (IVIG), hydrocortisone, amiodarone and furosemide infusion. Due to poor cardiac function epinephrine infusion was also commenced. The child gradually recovered with no more need for inotrops, anti-arrhythmic medications or respiratory support (Figure 1B). Nevertheless, during his hospital course he was noted to have right bundle branch block that progressed within 3 weeks of admission to CAVB with bradycardia down to 50 beats per minute (Figure 2B). Dual chamber permanent pacemaker (DDD-mode) was inserted due to persistence of complete heart block that did not resolve. Follow up after 5 months showed improvement in cardiac function (EF: 60%) but continued to have complete heart block with complete dependence on pacing rhythm. 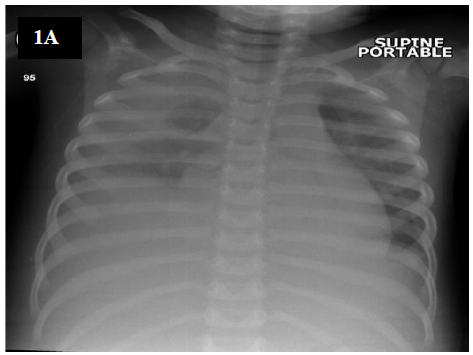 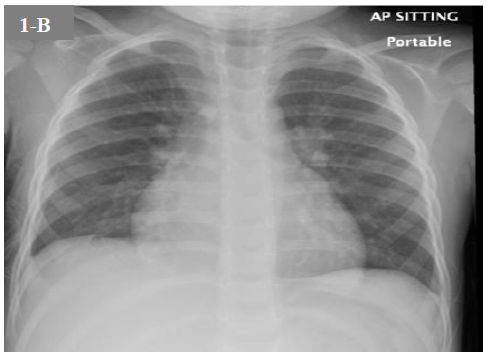 Figure 1: B: CXR pre-discharge after recovering from acute myocarditis. 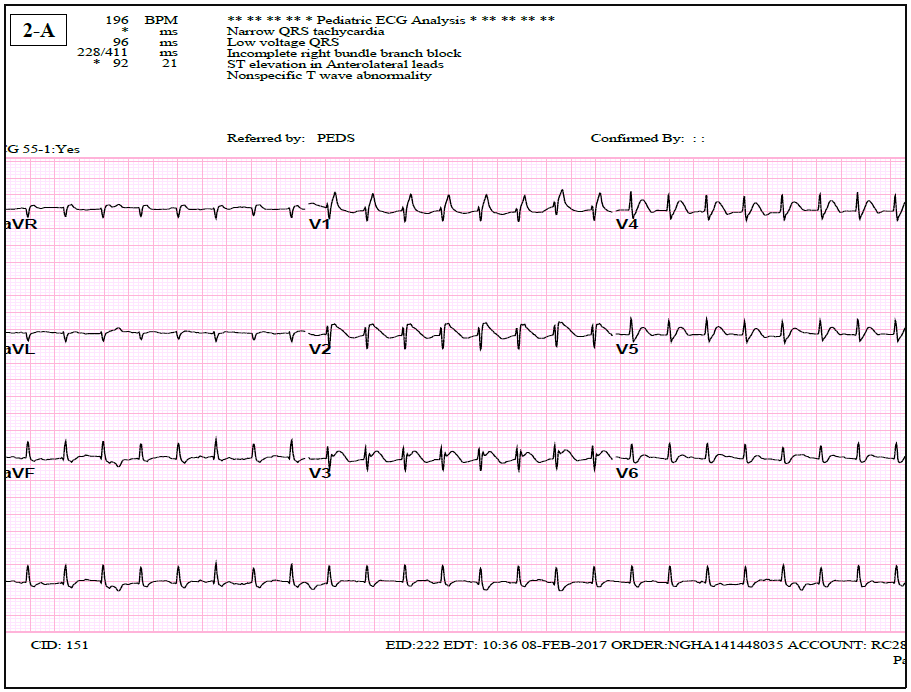 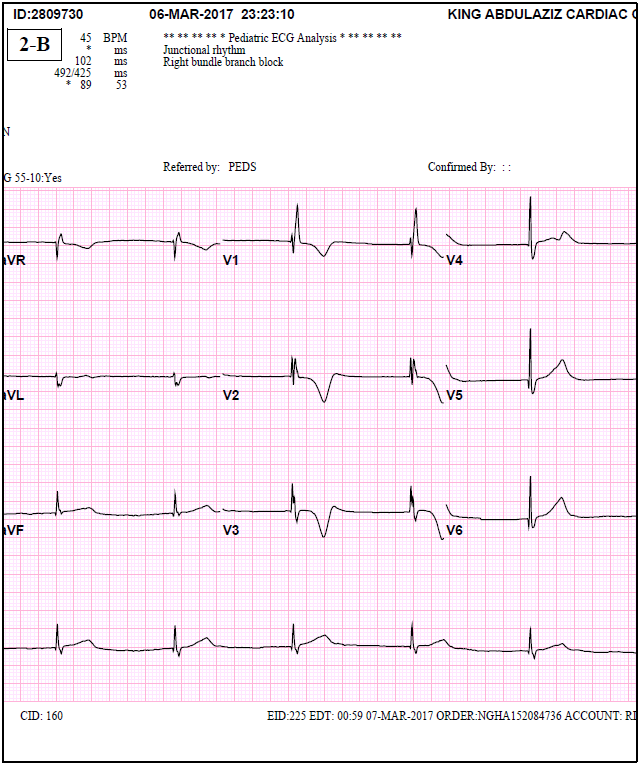 Figure 2: B: Complete CAVB 3 weeks after initial presentation with acute myocarditis prior to pacemaker insertion.

Myocarditis is a serious disease that can affect children. It usually presents with nonspecific symptoms that mimic other diseases, making early diagnosis difficult and challenging [1, 3]. The most common cause of myocarditis is viral infection, however the etiology is not always identified and viral isolation cannot always be achieved. In our case, we detected the presence of human enterovirus which has been reported by many studies as a common cause of myocarditis [2, 4]. According to Wang et al, the most common pathogens are coxsackievirus B and echovirus, both of which belong to enterovirus group [4].

Myocarditis has variable clinical presentations, frequently with overwhelming systemic symptoms and occasionally with life threatening condition such as Stokes Adams attack or life threatening dysarrhythmia [1]. One of the first encountered signs of myocarditis in children is sinus tachycardia that is out of proportion of fever or other causes.

This tachycardia is usually due to myocardial inflammation or cardiac compensatory mechanisms secondary to heart failure and cardiogenic shock [3].

The most common reported complications of viral myocarditis in children are ventricular tachycardia, bundle branch block and cardiomyopathy [2]. In another published study, the authors reported arrhythmia in almost 50% of hospitalized children with acute myocarditis with worsening in prognosis and outcome if they were present [10]. Bradyarrhythmia and other forms of conduction abnormalities such as first-degree, second-degree and complete heart block are uncommon in pediatric population with myocarditis [1]. In one study, AV conduction block was reported in 33% of cases [8]. Most cases of CAVB recover within 1-2 weeks of onset, while the remainder may persist longer [11]. Furthermore, in previously published study, the authors reported persistent CAVB in up to 22% of children with myocarditis [3]. Because sinus tachycardia is the usual compensatory mechanism in myocarditis, the presence of bradyarrhythmia and conduction abnormalities can lead to rapid hemodynamic instability or even life threatening decompensation as we noted in our case that presented initially with junctional tachycardia and then progressed to bradycardia with CAVB [3].

Emergency management of such cases may include atropine, isoproterenol or temporary pacing. IVIG has been used to treat acute myocarditis but evidence is lacking in preventing or managing heart block associated with myocarditis

The mainstay of management in such cases is permanent pacemaker implantation, which can be life-saving [3]. A study by Epstein et al. [13] reviewed 40 cases of acute myocarditis with advanced AV block determined that recovery of AV conduction occurs in 67% within an average of 3.3 ± 2.8 days. Furthermore, they mentioned that most of their patients with AV block required temporary pacing but only 27% require permanent pacemaker insertion due to failure of recovery within a week [13]. Their study concluded that AV block persisting longer than 1 week is an indication for permanent cardiac pacing need, while in other studies the authors recommended 2 weeks waiting-interval before considering permanent pacing [1, 13]. Our patient did not recover after 1 week of observation and significant bradycardia were noted that justified permanent pacemaker insertion without further delay.

In children, CAVB may complicate viral induced myocarditis leading to hemodynamic consequences and comorbidities. Some of children may not recover and continue to have persistent CAVB. For those cases permanent pacemaker should be considered if CAVB remains more than one week.