Development of Renal Cell Carcinoma in A Young Patient with Ileocecal Crohn’s Disease Under Treatment with Infliximab: Case Report and Review of the Literature

We describe a rare case of a young patient with Crohn’s disease, who accidentally was found to have developed renal cell carcinoma while on treatment with anti-TNF-α biologic agent. The patient was submitted to laparoscopic resection of the tumor. Up to December 2019 he is in perfect condition without receiving any kind of antineoplastic treatment. Clinicians should bear in mind this clinical combination in patients with Crohn’s disease under treatment with biologic anti-TNF-α agents. Because the exact influence of anti-TNF-α biologic agents is largely unclear for now, the continuation of treatment might be a possible option.

Although descriptions of the appearance of renal cell carcinoma (RCC) on the ground of ulcerative colitis have been previously described [1,2,3], descriptions of RCC developed on the course of Crohn’s disease (CD) are scarce [4]. Patients with CD are at increased risk for both intestinal and extra-intestinal malignancies [5] and this risk is mainly attributed to chronic inflammation and immunosuppression [6, 7]. We describe here a young patient with CD who accidentally was found to have developed RCC during his treatment with anti-TNF-α biologic agent. The patient was submitted to laparoscopic resection of the RCC. Up to December 2019 he is in perfect condition without receiving any kind of antineoplastic treatment.

A male patient, aged 35, was suffering from stenotic ileocecal CD, since the age of 23. During the last 4 years he was under treatment with anti-TNF-α agent (infliximab) with initially satisfactory clinical results. However, during the last two years it became necessary to shorten the intervals of the administration of infliximab due to gradual loss of response. In May 2018 he was finally switched on to ustekinumab because of the appearance of a severe allergic reaction to infliximab. At that time, abdominal imaging techniques (computed tomography and magnetic resonance imaging) performed on the basis of his regular follow-up, revealed the presence of an almost 3 cm-diameter tumor in the right kidney with imaging characters compatible with RCC (Figures 1-3]. After a thorough discussion with the patient and his relatives, a laparoscopic excision of the tumor was finally performed. The histological picture of the 5 × 4 × 1cm surgical specimen was compatible with RCC. A grade III malignancy stage according to Fuhrman classification was described. In some areas the tumor was reaching the renal capsule, however without infiltrating it. Surgical margins were free of tumor invasion. After the complete excision of the tumor no further treatment was applied. At present (December 2019), the patient is in a satisfactory clinical situation under treatment with ustekinumab. 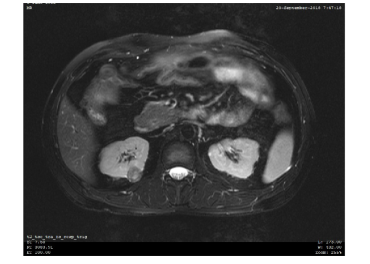 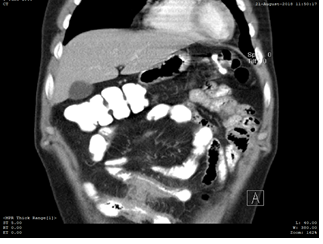 Figure 2: Computed Tomography of the abdomen showing extensive terminal ileum involvement from Crohn’s disease along with an inflamed mass connecting the two involved parts of the bowel. 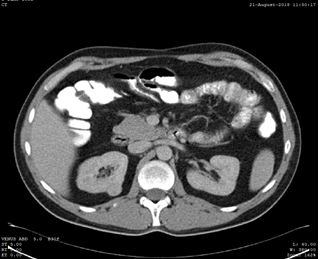 Figure 3: Computed tomography of the abdomen showing a renal mass of 3 cm diameter, occupying the upper part of the right kidney.

Patients with CD seem to be at a relatively increased risk for development of RCC. In a population-based study in Chinese patients with IBD So et al, found that patients with CD had a higher risk of RCC (SIR 6.89; 95% CI, 2.22-21.37), compared with the general population [8]. Similarly, Wauters et al. [9] in a retrospective study including both, patients with IBD and RCC and patients with rheumatoid arthritis and RCC, found seven patients with renal cell carcinoma who were exposed to anti-TNF-a treatment. Compared to the group of patients with RCC without exposure to anti-TNF-a agent treatment, they were younger at age of diagnosis and they had received immunosuppressives more frequently. However the standardized incidence ratios for IBD-RCC were not increased after anti-TNF exposure. Derikh et al found that pancolitis, penetrating CD, IBD related surgery, male gender, and older age at IBD onset were independent risk factors for RCC development. Also IBD patients had lower N-stage, lower M-stage, and underwent more frequently surgical treatment for RCC compared to the general population, thus having better survival rate [5].

It is of interest that most of the relevant studies suggest that immunosuppressive and anti-TNFα therapy does not adversely affect disease free and overall survival in IBD patients following RCC diagnosis, meaning that treatment with biologic agents might be started or continued after RCC diagnosis in patients with low stage RCC [9]. The explanation could probably related to the fact that TNF-α can act as an autocrine tumor growth factor and that its presence is usually associated with poor prognosis. So despite concerns regarding a possible carcinogenic effect of treatment with anti-TNF-a factors, these agents have been previously considered as a therapeutic strategy for RCC, although other studies did not describe beneficial effect of anti-TNFα therapy in metastatic RCC [10].

Concerning IBD patients with malignant disease in their past history we suggest that they should be managed jointly with the oncologist. Moreover, some factors including location, histology, and prognosis of the tumor, as well time from diagnosis and severity of the underlying inflammatory disorder, should be taken into account concerning the decision of restarting treatment with anti-TNF agent or not. However, mesalazine, corticosteroids, antibiotics, enteral and parenteral nutrition and surgery should freely continue [11].

In conclusion, RCC may develop in patients with IBD treated with biologic anti-TNF-α agents. The diagnosis of RCC is usually incidental on routine abdominal imaging especially in young patients with IBD. Because the exact influence of anti-TNF-α biologic agents is largely unclear for now, the continuation of treatment might be a possible option.