Encephalocraniocutaneous lipomatosis (ECCL), also known asHaberland syndrome, is a rare, non-hereditary neurocutaneous condition first described by Haberland and Perou in 1970. Dysgenesia of the cephalic neural crest and the anterior neural tube during embryo-pathogenesis is a most widely accepted theory. Most ECCL patients present with characteristic lipomatous hamartomas with overlying alopecia in a unilateral distribution on the scalp and ipsilateral scleral lipoepidermoid cysts. The subcutaneous fatty mass with nonscarring alopecia seen in patients with ECCL, better known as nevus psiloliparus is the dermatologic hallmark of the condition. Because of the nonprogressing nature of the lesions involved, most patients with ECCL live nearly normal lives with the exception of an increased chance of epileptic seizures, mild-to-moderate mental retardation, and motor impairment that all correlate with the presence of cerebral malformations, such as intracranial lipomas, spinal lipomas, arachnoid cysts, atrophy of a hemisphere, porencephalic cysts, dilated ventricles, hydrocephalus, and calcifications.

A 7 day old female baby born at full term with a birth weight of 3.2 kg , delivered by normal vaginal delivery with the history of Birth Asphyxia. She was born out of a non-consanguineous marriage, the mother being 28 years old and a second gravida. Antenatally, there was no history of any drug intake or maternal illness and it went uneventful. There was no history of any neonatal death in the family. She was admitted in the NICU (Outborn Unit). On physical examination (head to toe examination), revealed a large hairless lesion on the left frontotemporal scalp (nevus psiloliparus) and similar dermal presentations along the left side of the body (along the lines of Blaschko). Eye examination showed a dermolipoma (bulbar conjunctival hypertrophy) in the left temporal conjunctiva, left sided peripheral corneal opacity, skin tag at the outer canthus, coloboma of the medial left upper eyelid. Grade 2 (Roman) Limbal dermoid as per Visual Scoring System for Limbal Dermoid proposed in 2018.

On Cardiovascular examination, heart sounds were irregularly irregular with no murmur associated. All the other systems were within normal limits including the genitals. The baby went home against medical advice and was regularly followed up over phone. On day 21 of life, the parents informed that the baby expired at home following inconsolable cry since that evening. The cause of death is still unknown.

Atrophic changes of bilateral cerebral hemispheres noted as evidenced by prominent extra cerebral CSF spaces, sylvian fissure, temporal and occipital horns of lateral ventricles and benign enlargement of the Subarachnoid spaces. On MR Angiography, A1 segment of left ACA appears hypoplastic, left vertebral artery appears hypoplastic, Left PCOM appears hypoplastic. Skin Biopsy was planned to be done at the age of 6 weeks but could not be done owing to the sudden demise or sudden death. 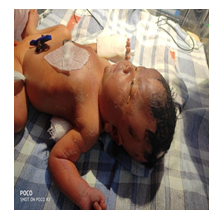 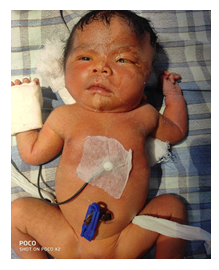 Figure 1B: Coloboma of the left upper eyelid with a skin tag at the outer canthus. 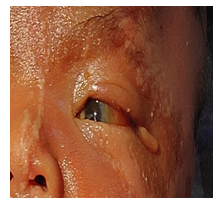 Figure 1C: Shows subcutaneous lipomas along the Lines of Blaschko. 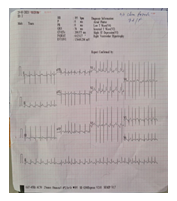 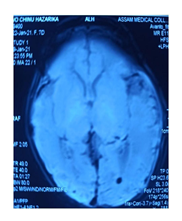 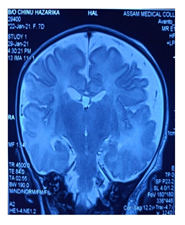 Table 2: ECCL Application of criteria to the diagnosis.

There is no specific treatment for ECCL; management includes symptomatic treatment and surgical correction of cutaneous lesions for cosmetic improvements. If the diagnosis could be made earlier, the care of symptoms and the quality of life of the patient would be improved.