Introduction
Strokes are the first cause of non-traumatic disability and the second cause of death worldwide. Data analysis is useful to improve their care. Our purpose was to describe the epidemiological profile of stroke cases admitted at the Sylvanus Olympio University Hospital (CHU-SO) from 2017 to 2018.

Method
We conducted a descriptive study that included all stroke cases admitted at Internal Medicine Department of CHU-SO from January 2017 to December 2018. Socio-demographic and clinical data were collected by medical records reviewing and patients' interview and thereafter compiled and analyzed with Epi Info 7.2.1.0.

Conclusion
Strokes affected mainly active people with high mortality exacerbated by the absence of the head CT scan. Early availability of the head CT scan and implementation of other specific strategies carried out of an action plan could contribute to reduce the burden of stroke at CHU-SO.

Over the past five years, stroke research in Togo has included a systematic review of stroke studies conducted in Togo [8], epidemiologic aspects of stroke cases admitted to Kara University Hospital [9], and CT scan aspects [10] and factors predictive of mortality [11]. Although CHU-SO is a major stroke referral hospital, no studies have specifically addressed the epidemiologic profile of strokes admitted to the neurology and internal medicine departments at this hospital despite data availability. Yet such research could help medical teams reorient or implement interventions that have an impact on stroke morbidity and mortality. The results of this study could also serve for planning and budgeting resources to ensure their continued availability for more effective stroke control.

The objective of this study was to describe the epidemiological profile of stroke cases admitted to the Internal Medicine Department of Sylvanus Olympio University Hospital from January 2017 and December 2018 to characterize their magnitude, socio-demographic and clinical characteristics and trends.

The study was conducted at the Internal Medicine Department of the CHU-SO in Lomé.

This was a descriptive study conducted from February 1 to March 1, 2019.

Study population was stroke cases admitted to the Internal Medicine Department at CHU-SO from January 1, 2017 and December 31, 2018.

A stroke case was any patient admitted to the Internal Medicine Department of CHU-SO between January 1, 2017 and December 31, 2018 who had a focal neurological deficit of abrupt onset lasting more than 24 hours and/or in whom the head CT scan revealed an ischemic or hemorrhagic stroke.

The study variables were:

We used "Microsoft Word" for text entry and "Microsoft Excel" for data compilation. For the analysis we used Epi Info version 7.2.1.0. The results are presented in tables and graphs with values representing ratios, proportions, median and interquartile interval. For the statistical analysis we used the Chi-square test or the Fisher Exact test to assess the difference with a significance level of p < 0.05 and the 95% confidence interval to assess the significance of the Odd Ratio (OR) between deaths and the factors studied.

Ischemic Stroke (IS): Type of stroke for which brain imaging (Head CT scan or Magnetic Resonance Imaging) excludes any other potential cause and in particular a cerebral hemorrhage.

The categorization described by the “Institut National de la Statistique, des Etudes Economiques et Démographiques (INSEED)” of Togo during the survey of Basic Welfare Indicators (QUIBB) conducted in Togo in 2015 [12] was used as the basis for defining socio- professional categories in relation to the period prior to the last stroke episode.

Prior authorization was obtained from the CHU-SO administration and the Internal Medicine Department before conducting the study. The data collection, both during the analysis of the files and during the interview, was carried out confidentially and anonymously.

Socio-professional category and origin of cases

Delay for recourse to the Sylvanus Olympio University Hospital

The overall median duration of stay was 9 days with IQ [3.5-18] and did not varied by year or sex. 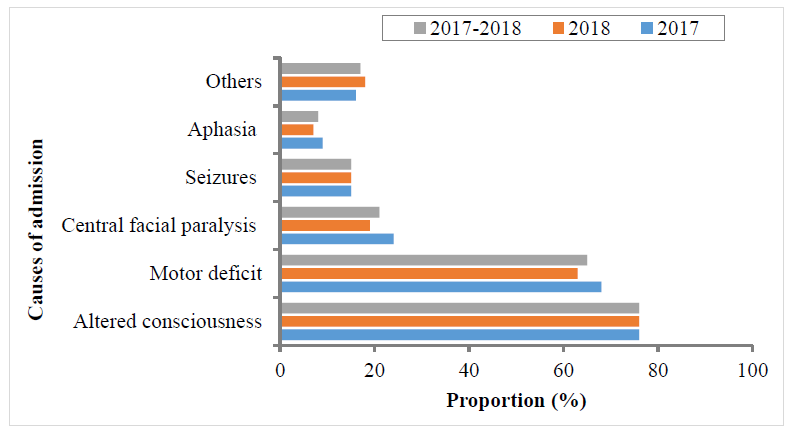 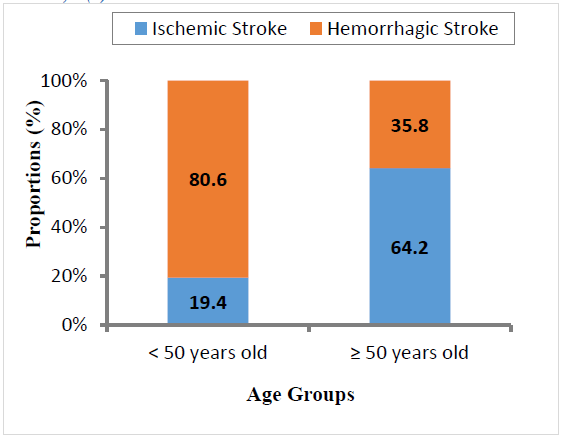 This study determined the proportional morbidity of stroke in the Department of Internal Medicine of CHU-SO. It has also revealed the link between age and the type of stroke as well as the high mortality of patients admitted. The study also showed a relationship between performing Head CT scan and the survival of patients admitted for stroke at CHU-SO. The results of this secondary data analysis may be compromised by data quality, including a significant proportion of missing and inconsistent data. Most of the necessary data was available for this study. Indeed, for the variables with incomplete information, the proportion of available data was at least 86%.

The overall prevalence was 7.6%. For a pathology with high fatality and disability, this prevalence is high. It is significantly higher in subjects aged 50 years and over, where it is 11.4%, than in subjects under 50 years of age, where it is 4.1% (p=0.000). This difference suggests that the prevalence of stroke may increase with age, as shown in other studies in Africa and around the world [1,13,14,15]. The incidence of stroke in our study is similar to the 6.5% prevalence (p=0.338) reported by Coulibaly [6] in a study conducted in three Medicine Departments in Mali. Pio [16] in Togo and Basse [13] in Senegal reported higher frequencies of 45% (p=0.000) and 19.6% (p=0.000), respectively. The differences can be explained by the study sites: our study was conducted in an Internal Medicine Department where are admitted all types of patients, while those of Basse [13] and Pio [16] were conducted in a Neurology Departments where are only admitted patients with neurologic conditions, primarily stroke.

The patients’ mean age was 58.5 years and 52% were under 60 years of age. These results showed that the majority of stroke cases admitted to CHU-SO are adult who correspond to the active category of society. The occurrence of stroke could have an impact on family income through death and disability.

In our study, the median time to seek medical care at the CHU-SO was 1 day IQ [0-2] (mean 2.1±4.3 days) with 53.8% of patients seeking care at least 24 hours after the onset of symptoms. This relatively long delay in relation to the severity of the disease can be explained by the low socioeconomic level of the populations leading to prior recourse to self- medication and a long delay in patient referral. Kumako [9] reported a longer average delay (5.15±8.97 days) in Kara, Togo.

The most frequent reasons for hospital admission were altered consciousness (75.7%) and hemibody motor deficit (65.3%). The high proportion of cases with altered consciousness can be explained by the nature of the Department, which has an intensive care unit and thus receives most severe cases. In African populations, due to a lack of knowledge about stroke and poverty, it is often the apparent severity of symptoms that motivates consultations or referrals, resulting in a low proportion of signs such as headache, facial paralysis, or paresthesia. Keita [21] in Mali reported a predominance of coma and hemiplegia, with a frequency of 47.8% and 54.7% respectively.

The patients’ history was dominated by high blood pressure (68.2%), alcoholism (15%) and diabetes (12.1%). This may indicate that a history of these conditions increases the risk of stroke. Most stroke studies [1,4,16,22] have reported high blood pressure as the most common risk factor for stroke.

In our series, we noted a high case fatality of 62.4% among hospitalized stroke patients. This is significantly higher than the case-fatality reported in various studies in Togo [9] and Africa [6,22,24], which ranged from 20.3% to 44.6%. This high case fatality could be due to a conjunction of several factors. For patients, first of all, the severe and critical condition of patients at admission, sometimes associated with comorbidities that were initially unknown or insufficiently managed. This critical state may be aggravated by the delay in medical consultation, often with initial recourse to self-medication, traditional practitioners or religious worship centers, a situation most often favored by the low socio-economic level. Secondly, it could be the low capacity of the CHU-SO due to the non-availability of diagnostic means as well as limited therapeutic means. Patients were transported even in the acute phase to other health structures for the CT scan. The sequelae were found in 80.8% of the recovered patients, some of which were a source of significant disability such as epilepsy (16.7%), dementia (33.3%) or motor deficit (61.9%). This shows the heavy burden of morbidity associated with this condition responsible for a more or less important and most often definitive dependence.

Strokes are common in the Internal Medicine Department and affect active people. They are responsible for a high case fatality and disabling sequelae that have a significant social and economic impact. Despite this threat, the current health situation does not appear to be favorable in the short and midterm to controlling this disease, due to an insufficient technical platform and often the late recourse to health facilities. There is a need to develop and implement a stroke control action plan with strategies including communication and outreach interventions among people living with defects at risk of stroke. It is also critical to equip CHU-SO with stroke diagnostics, equipment, materials, and medications for stroke management. Capacity building of human resources at the CHU-SO supported by a supervision and monitoring/evaluation mechanism is also essential for stroke control.

The authors would like to express their gratitude to the Ministry of Health and Public Hygiene, the Direction of the Sylvanus Olympio University Hospital and the Head of the Internal Medicine Department of the CHU-SO.

The authors have declared that they have no conflicts of interest.

Contributions of the authors:

What do we already know on this subject?

What else does this study bring?

This study focuses on the epidemiology of stroke in a level 3 national referral service in Lomé with prevalence in a non-neurological service. It reveals the critical importance of early availability of CT images to guide therapeutic management and the association between their availability and stroke-related mortality.