We report a case report of a 5years old girl who presented with progressive enlarged and fusion of the second and third toes of the right foot since birth which impairs shoe wear. After a clinical history and examination and radiological evaluation, the diagnosis of right foot macrodactyly was established. Following surgical excision of the macrodactyly patient showed good clinical outcome after 1year of follow-up. Numerous treatment options have been suggested without consensus, specific treatment is individualized. The primary goal for treatment is a pain-free and functional foot that can accommodate normal shoes.

Foot macrodactyly is an uncommon congenital malformation characterized by enlargement of the soft tissue and osseous elements, which impairs overall foot development and affects normal function and gait. The malformation occurs in one or more toes and results in thickening of soft tissues, bone, and accumulation of fat [1]. Two types are known, static type where enlargement is present at birth and no disproportionately increase in size during growth, and progressive type whereby disproportionate growth occurs in the involved part of the foot [2, 3].

The exact cause is unknown and the condition is not inherited, it is hypothesized that the condition may be sequelae of germ cell abnormality or pathology that become hypersensitive to growth stimuli in a specified area during cell cleavage or organogenesis [4, 5]. Disturbance of growth limiting factor occurs in areas affected during fetal development lead to disproportional growth due to lack of growth inhibitor the part affected has also been stipulated as one of the possible causes [5, 6].

Foot macrodactyly tends to be of the progressive type with male preponderance and it can occur unilaterally or bilaterally and 10 % of the cases may be associated with syndactyly of the adjacent digit [7].

The condition is associated with other conditions including angioma, lymphangioma, or neurofibroma Bannayan-Riley-Ruvalcaba syndrome; Maffucci syndrome; Ollier's disease; Milroy's disease; and Klippel-Tre naunay-Weber syndrome, among others. It is more frequently reported in the hands than the feet [8, 9]. Numerous treatment options have been suggested without consensus and specific treatment is individualized. The primary goal for treatment is a pain-free and functional foot that can accommodate normal shoes [6, 10, 11].

Informed consent was obtained from the child's mother. The authors have guaranteed that the child cannot be recognized by the information included in this case report.

The patient was 5years old girl who was reviewed at our orthopedic clinic due to a history of progressive enlarged and fusion of the right second and third toes since birth which was associated with intermittent foot pain and inability to wear shoes. There was no family history of orthopedic abnormalities and other siblings in the family were healthy.

The patient was a healthy, normal gait pattern with stable vital signs. On examination of the right second toe demonstrated a significant enlargement of the entire digit compared with the left with an extra toe on the second toe (see Figure 1). The neurovascular evaluation was normal, with good perfusion. 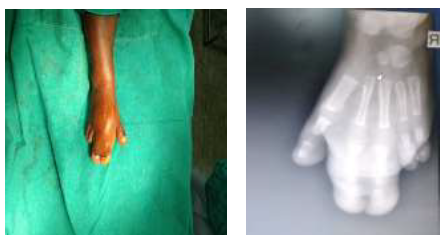 Figure 1: Preoperative images and foot x-ray of the right foot showed enlargement of the second and third toes with simple syndactyly.

The diagnosis of right foot macrodactyly with simple syndactyly was established.

The patient was planned for soft tissue debulking and ray's amputation of the second and third metatarsal. Intraoperative, an inverted V-incisional was made on the plantar and dorsal aspect of the toe followed by the soft tissue dissection included fatty tissue, and neurovascular bundles identified and secured, then the distal aspect of the second and third metatarsal was osteotomized with an oscillating saw. Redundant soft tissues were also debulked and tissue sample taken for histology.

Primary closure was performed and a short leg cast was applied for two weeks to promote soft tissue healing and the patient was followed for a period of 1-year (see Figure2). 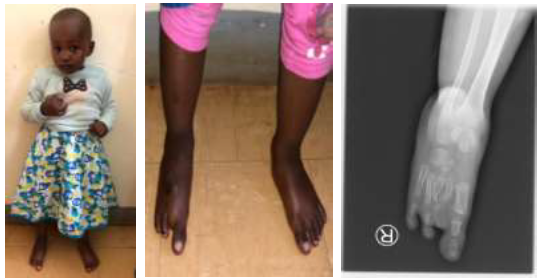 After a year, the child was reviewed at Orthopedic Clinic for a follow-up examination. She had a painless right foot, able to wear shoes and walk with a normal gait and biopsy revealed lipomatous hyperplasia (See Figure3).

Foot macrodactyly is a rare progressive congenital anomaly resulting in substantial both function and cosmesis impairment. The progressive nature of the condition leads to diminished ability to wear shoes and the overall function of the foot. Management of macrodactyly is individualized while the goal for treatment is a pain-free and functional foot that can accommodate normal shoes.

In this case, the patient was managed with surgical excision after whereby 1year of follow-up she had a painless foot with a normal gait and able to wear shoes.