Meckel’s diverticulum is the most common congenital anomaly of small bowel that occurs in around 2% of population. It is caused by incomplete involution of the proximal portion of the vitelline duct which connects the primitive gut to the yolk sac during the 5th-8th week of gestation [1-3]. Anatomically, it contains all layers of the small intestine and is usually located on the antimesenteric border of the ileum. A rule of twos has been described concerning the Meckel’s diverticulum: (1) occurs in 2% of the population, (2) it is usually found in children under 2 years of age, (3) it causes complications twice as often in males as in females, (4) it is 2 inches long, (5) it is most frequently located 2 feet (60 cm) from the ileocaecal junction [1, 3].

A 27-year-old male during a hormonal infertility treatment, with no previous abdominal surgery presented at the Emergency Department. He was suffering from a severe abdominal pain, mostly located in the right lower quadrant; nausea, vomiting, anorexia and no gas discharge during the previous 12 hours. He associated the beginning of the ailments with urination. Similar episodes occurred twice a year since he remembers. Several times he was admitted to different Emergency Rooms, with no diagnosis whatsoever. The patient’s abdomen was tender and distended, with a positive Blumberg sign. The bowel sounds were slightly hyperactive. His body temperature was 36.6°C. Laboratory tests showed leucocytosis 19 910/µl, C-Reactive Protein 10.65 mg/l, Creatinine 1 mg/dl, Haemoglobin 17.7 g/dl and Haematocrit 50.6%.           The abdominal X-ray indicated air-fluid levels and a suspicion of a GI tract perforation in the right abdomen. Because of a nonspecific image a CT scan was performed – it showed the characteristics of a subileus, with necking on the level of small intestine (Figure 1 and 2). 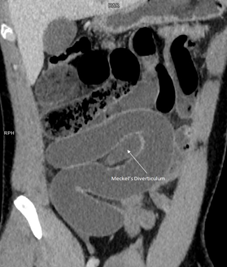 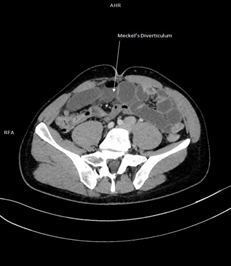 An emergency laparotomy was performed which revealed dilation of small bowel segments and a giant Meckel’s diverticulum (8.5 cm long and 2.5 cm wide) connected to the umbilicus through a wide adhesion. A volvulus among the small bowel loop that was slung over the diverticulum was found, which caused the organ to turn ischemic (Figure 3 and 4). The affected bowel was retracted and the adhesion was liberated. A surgical resection of the diverticulum was performed and the defect in the intestinal wall was double-stitched.

The patient was discharged on post-operative day 3 without any complications. Pathology findings indicated diverticulitis without any pancreatic or gastric metaplasia. 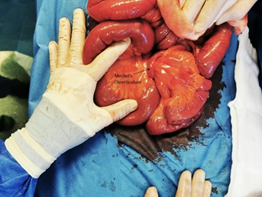 Figure 3: The small bowel loop that slung over the diverticulum. 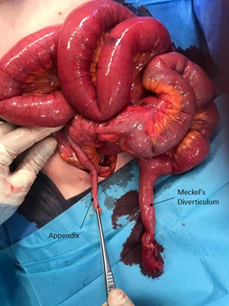 Figure 4: The affected bowel was retracted and the adhesion.

The Meckel’s diverticulum is a true diverticulum, consisting of all three layers of small intestine with an overall incidence of 2%. It results from an incomplete obliteration of the omphalomesenteric duct between the 5th and 7th week of gestation [1]. On average, it is about 3 cm long. It is classified as giant if its length exceeds 5 cm, which is relatively rare and more prone to complications such as obstruction. The largest Meckel’s diverticulum on record was over 100 cm long. This diverticulum is usually found within 100 cm of the ileocaecal valve on the antimesenteric border of ileum [4].

Most of the Meckel’s diverticulum cases are asymptomatic, although the risk of developing complications during lifetime is estimated at around 4%. The most common include: intestinal obstruction (36.5%), diverticulitis (12.7%) and haemorrhage, due to the presence of heterotopic mucosa, gastric or pancreatic (11.8%). The risk of complications decreases with age, and by the age of 76 the risk would be 0% [3]. Diagnosis is complicated, due to nonspecific symptoms, usually associated with intestinal obstruction or diverticulitis (which may appear as appendicitis). Radiological imaging is of limited value – sonography usually shows an image similar to appendicitis or a fluid-filled structure in the lower right quadrant and in CT scan the Meckel’s diverticulum is difficult to distinguish from regular small bowel [4-6].

Treatment of a symptomatic Meckel’s diverticulum has always been surgical resection. However, in case of asymptomatic patients there are no conclusive opinions – the decision is usually made on case-by-case basis [3, 4].