“Bilateral Ureteral Diffuse Large B-Cell Lymphoma” from the Diagnosis to the Management: A Unique Case to be Reported and Review of Literature

Citation: Amr A. Elsawy, Abouelkheir T. Rasha, Elhawary K. Amira. “Bilateral Ureteral Diffuse Large B-Cell Lymphoma” from the Diagnosis to the Management: A Unique Case to be Reported and Review of Literature. Archives of Clinical and Medical Case Reports 3 (2019): 216-221.

Non-Hodgkin's lymphoma (NHL) has a far greater intent to involve extranodal sites compared with Hodgkin's lymphoma (HL). The most commonly affected extranodal sites are the gastrointestinal tract, whereas NHL of the kidney collecting system or the ureter is very rare. Diagnosis and management of this disease have not been unified yet due to the limited number of the reported cases. In our report, an Egyptian male with bilateral diffuse large B-cell lymphoma of the ureter was identified. The patient was treated with surgery and chemotherapy. Supported by the relevant literature, the diagnosis and management of lymphoma of the ureter are discussed in our report.

In June 2018, a 55-year-old Egyptian male was referred with sub-acute onset bilateral flank pain and oliguria of 1 week duration, Initial renal ultrasonography demonstrated bilateral hydronephrosis which was confirmed by CT scan without contrast (Figure 1A), which revealed also evidence of bilateral soft tissue masses in the upper lumbar ureter extending to the renal pelvis and bilateral hilar lymph nodes (Figure1B). Reviewing the medical history of the patient was unremarkable. Physical examination findings were normal, with absence of any clinically evident lymph nodes. In laboratory tests, renal functions tests were affected in the form of high serum creatinine: 17 mg/dl, other laboratory parameters including the complete blood cell (CBC), blood chemistries and the liver function tests were normal.

Aiming at managing the acute condition, the patient was initially subjected to one session of hemodialysis, serum creatinine dropped to 8 mg/dl. Then, the patient was transferred to the operative theatre, at which, he was managed by fixation of bilateral double pig tail ureteral stents. Post drainage of the kidneys, recovery of the patient was clearly observed in the form of relief of the flank pain, good urine output and drop of serum creatinine to 1 mg/dl. In order to delineate the nature of bilateral ureteral soft tissue lesions which were demonstrated initially by non-contrast computed tomography, magnetic resonance imaging (MRI) was done and it revealed areas of bilateral soft tissue masses at the upper lumbar ureter (Figure 2A). This section of the ureteral lesions exhibited an intermediate signal hyperintensity at T1 and T2?WIs. MRI scans also revealed hilar and retrocaval lymphadenopathy (Figure 2B).

For completion the workup for ureteral mass, we performed retrograde diagnostic ureteroscopy which revealed a fleshy soft tissue lesion at the upper end ureter (Figure 3), cytology was retrieved and biopsy was taken. The cytology smear revealed scattered reactive urothelial cells against a background of lymphocytes, plasma cells and neutrophils. Examination of the biopsy revealed poorly differentiated cells arranged in small groups and single cells with plasmacytoid features (eccentrically placed nuclei and variable amount of eosinophilic cytoplasm). This suggested high grade urothelial carcinoma (Figure 4A). Radioisotope renography demonstrated that the glomerular filtration rate (GFR) of the right kidney was 35 ml/min, while the GFR of the left kidney was 59 ml/min. 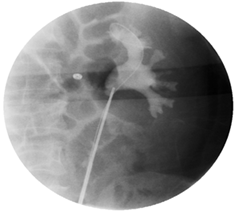 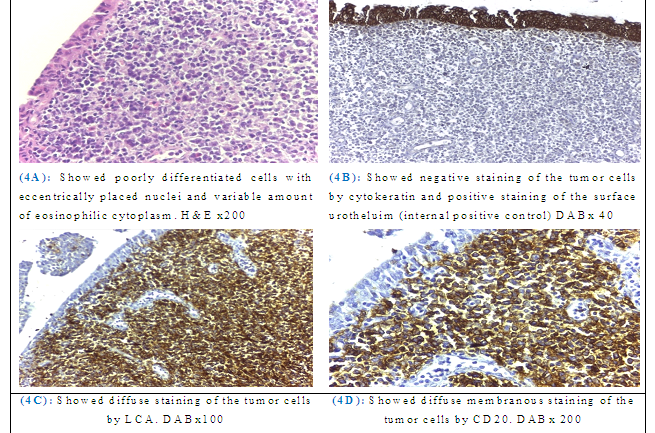 As a case of upper tract urothelial carcinoma (UTUC), the patient was subjected to intervention on the right side, the less functioning kidney, by radical nephroureterctomy with lymphadenectomy of intraoperative detected retrocaval lymph node.H&E sections of the radical specimen revealed tumor tissue formed of single, undifferentiated malignant cells with eccentric nuclei and variable amount of eosinophilic cytoplasm (Figure 4A). Immunochemistry (IHC) analysis of the tumor cells revealed negative staining for keratins (excluding epithelial origin) (Figure 4B), positive membranous staining for LCA (Figure 4C), CD20 (Figure 4D) and scattered positive CD3 reactive T cells. The diagnosis of (DLBCL) was confirmed based on the specific IHC analysis results.

The patient was then referred to an oncologist for adjuvant chemotherapy. The patient received systemic multi-agent chemotherapy combining 375 mg/m2 rituximab, 750 mg/m2 cyclophosphamide, 20 mg/m2 liposomal doxorubicin, 1.4 mg/m2 vincristine and 80 mg methylprednisolone (R?CHOP), which was administered every three weeks for three cycles.

In November 2018, follow up MRI examination revealed that the left lumbar ureteral tumor disappeared (Figure 5). The patient was subjected to removal of the left ureteral stent, left ureteropyelography and diagnostic retrograde ureteroscopy revealed free upper end ureter from any growth lesions. Thus far, the follow?up period is five months and the current evalua­tion is that the patient is in complete remission.

Unlike HL, NHL has a greater intent to involve extranodal sites [1]. The most commonly affected extranodal sites are the gastrointestinal tract, testes, ovaries, skin, prostate and central nervous system, whereas NHL of genitourinary tract is rare accounting for less than 5% of extranodal lymphoma [2]. While cases of extranodal isolated ureteral lymphoma have been reported, the most common genitourinary site for extranodal involvement is the kidney [3]. Ureteral involvement by B cell lymphoma is rare, it may be either primary site or more commonly, associated with nodal lymphoma.

A precise search of the PubMed database revealed 21 case reports of malignant lymphoma of the ureter. Detailed information of the reported 21 cases is shown in (Table 1) [4-12]. The median age of the patients was 54 years, ranging between 12 and 74 years. Males were more commonly affected than women by 3 folds. The majority of patients presented with flank pain and hydronephrosis, with no evident manifestations of lympho-proliferative disorder such as clinically manifested lymphadenopathy, weight loss or fever. A few patients may also be presented with hematuria or postrenal azotemia.

Table 1: Malignant lymphoma of the ureter detailed information of the reported 21 cases.

Imaging analysis revealed that the majority of cases had hydronephrosis with no particular imaging characteristics a part from regional lymphadenopathy in 8 cases out of the 21. In most of the cases (14 patients), the diagnosis was initially found to be urothelial carcinoma in the sampled biopsy retrieved by ureteroscopy, for which no immunohistochemistry (IHC) staining was used. For those patients, partial ureterectomy or nephroureterectomy was done.

The definitive histopathology of the radical specimens was evident for lymphoma confirmed by IHC analysis. In five cases, IHC was used for the biopsy from the start due to the high suspicion of being lymphoproliferative disorder, evoked by the extensive regional lymphadenopathy. Of all subtypes of NHL, DLBCL and follicular B-cell lymphoma were the most common subtypes to present. In the 14 cases that were diagnosed after surgical intervention by ureterectomy or nephroureterectomy, adjuvant chemotherapy in the form of 4 cycles of R-CHOP protocol (rituximab, cyclophosphamide, doxorubicin, vincristine and prednisolone) was administered.

The median follow up of the patients was 7 months, ranging between 3 and 15 months. Fifteen patients achieved complete remission of the disease during the follow up period, while, 3 cases developed exacerbation of the disease in the form of retroperitoneal lymphadenopathy which required extra three cycles of R-CHOP chemotherapy. Overall, 30-50% of NHL patients present with primary extranodal disease. However, the definition of primary extranodal lymphoma is controversial [13], particularly in patients where nodal and extranodal sites are involved. In the presence of incidental ureteral lymphoma, it is difficult to assess whether it is primary or secondary due to mass effect or infiltration from surrounding lymphadenopathy. Although distinguishing whether ureteral lymphomas are primary or caused by metastasis is difficult, in our report, it is important that the ureter was most likely the primary location of the disease due to the presence of small regional lymph node and absence of generalized lymph nodes.

Diagnosis is a challenge; primarily due to the lack of imaging characteristics in CT [5] or MRI [4], and, secondarily due to the rare incidence of this peculiar pathology in the ureter. In most of the cases, the biopsy retrieved by ureteroscopy is a small one and revealed usually plasmacytoid features as the cells have an eccentric nucleus and eosinophilic cytoplasm. Plasmacytoid features have be seen in a variety of tumors affecting the genitourinary tract, which include urothelial carcinoma, large cell lymphoma, plasmacytoma, malignant melanoma, paraganglioma, neuroendocrine carcinoma, and rhabdomyosarcoma [14]. The use of (IHC) markers of cytokeratin, CD45, CD 20 and CD3 confirms the diagnosis of lymphoma. The utility of CD45 with panels of antibodies to cytokeratin and S100 protein is helpful in the resolution of whether or not a polygonal or small cell undifferentiated lesion is a carcinoma, lymphoma, or melanoma [15]. Chemotherapy is the treatment of choice, especially in controlling systemic disease in evident nodal disease with ureteral involvement [16]. Prognosis of primary extranodal lymphoma is, to some extent, less favorable than the primary nodal disease with extranodal extension, mostly due to the earlier diagnosis and proper management by early chemotherapy in nodal disease group [17]. Primary ureteral lymphoma is still carrying the risk of kidney loss due to the management of the disease as upper tract urothelial carcinoma, with subsequent burden of chemotherapy and its nephrotoxic effect on the remaining solitary kidney.

We reported a unique case of primary bilateral ureteral DLBCL, presenting as bilateral ureteral soft tissue lesions. Although rare, lymphoma of the ureter should be included in the differential diagnosis of ureteral mass or idiopathic stricture. Immunohistochemistry (IHC) staining is the gold standard tool for histopathological diagnosis.

Written informed consent was obtained from the patient for publication of this case report and accompanying images.

The authors declare that there is no conflict of interests regarding the publication of this report.

Elsawy A. A. collected, analyzed the date, and wrote the paper; Abouelkheir T. Rasha provided the radiology images; Elhawary K. Amira did the pathological evaluation.