Morgagni hernia is a rare diaphragmatic hernia usually due to congenital defects in the diaphragm. It is rarely associated with cardiac anomalies, most commonly atrial small (ostium secundum) or ventricular septal defects. We report a rare case of Morgagni hernia occurring in association with Large ASD Secondum and Sever PHT mimicking a severe congenital heart disease in a newborn and the lack of awareness of the delayed presentation of Morgagni’s diaphragmatic hernia cause delayed of diagnosis.

Clinical Discussion: Our patients, a one-month-old girl, present with cyanosis and shortness of breath admitted were admitted with complaints of chronic cough and repeated chest infections treated accordingly and discharge in good condition. Readmitted after 1 week with similar presentation but her symptoms get worse by time ,patient admitted to PICU as aspiration Pneumonia, patient during the admission diagnosed with Congenital heart disease large ASD (ostium secundum) and Sever PHT, by echocardiography .she was still lethargic hypotonic, low birth weight , she had intermittent cyanosis inspit treating the chest infection was investigated, thoroughly later she was diagnosed with Morgagni Hernia after repeating CT chest with contrast two times. Repair of hernia was done and outcome was good inspite she was diagnosed late at age of 2 years. pulmonary hypertention treated ASD closure by double device.

Conclusion: Morgagni’s CDH is a rare malformation, which is difficult to diagnose by even the most experienced physicians.

• Compression of the heart by the bowel might have led to the incorrect diagnosis of congenital heart disease. Even in this era of highly sophisticated diagnostic tools,

• The basic idea of reporting this case is its rarity in incidence and dilemma in diagnosis. It highlights the difficulties in diagnosis, prompting a need for high index of suspicion when assessing patients with respiratory distress and with symptoms suggestive of gastrointestinal obstruction. A missed diagnosis can lead to life-threatening complications such as obstruction or strangulation which warrants early surgical intervention.

• The basic idea of reporting this case is its rarity in incidence and dilemma in diagnosis. It highlights the difficulties in diagnosis, prompting a need for high index of suspicion when assessing patients with respiratory distress and with symptoms suggestive of gastrointestinal obstruction. A missed diagnosis can lead to life-threatening complications such as obstruction or strangulation which warrants early surgical intervention.

Diaphragm is a muscular structure developed from multiple embryonic sources namely, theseptum transversum, thepleuroperitonealfolds, and thesomites[1]. If cartilages, an anatomical defect will result in the costosternal trigone which is known as foramina of Morgagni if the anterior pleuroperitoneal membrane fails to fuse with thesternumand costal cartilage [2]. It is one of the four possible CongenitalDiaphragmatic Herniae(CDH) accounting for 1-9% of them. The four types of CDH includeBochdalek hernia, Morgagni hernia,diaphragm event ration, and centraltendon defectsof the diaphragm[3,4]. CDH can be symptomatic or A symptomatic and can be diagnosed incidentally. The symptoms of CDH include nonspecific respiratory or gastrointestinal signs and symptoms[2]. Except for some rare cases, Morgagni hernia usually presents in childhood. Here in this case report, we present a case of a 2 years' female who had recurrent chest infection symptoms and later diagnosed to have Morgagni hernia.

One month old Saudi girl full term LSCS IUGR, 1.7 kg no Nicu admition presented at age of one month with history of cyanosis and shortness of breath was admitted as Pneumonia for one week PT was readmitted several times for the similar illness. She had been diagnosed Swallowing abnormality unresponsive to antibiotic therapy patient was thoroughly investigated for the recurrent aspiration and hypoxemia and Failure to Thrive was referred by the Pediatrician's to the department of pediatric cardiology to rule out congenital heart disease and pulmonary hypertention. The patient admitted to PICU as aspiration Pneumonia, patient during the admission diagnosed with Congenital heart disease large ASD (Atrium Septum defect (Secundum) and pulmonary hypertention, she was lethargic hypotonic, low birthweight, she had intermittent cyanosis in spit treating the chest infection.

Patient on 0.5 L PER minute oxygen by nasal cannula 2.1 kg below 3rd percentile Current Weight 11.5 kg on 3rd percentile our patient was cyanotic and tachypnoeic (approximately 80 breaths/min), with oxygen BP 75/35 MMGH, saturation of 78%. She was lethargic and hypotonic. No morphologic alterations to the central nervous system were found.no clubbing Chest is Reduced air entry was noted in the right lung base no added sound CVS SI +S2 wide fix sound +ESM 3 was investigated her initial blood work up (CBC blood count and chemistry was normal).

Electrocardiography revealed sinus tachycardia (120 beats/min), and complete right bundle branch block (Picture 0). Echocardiography showed Large ASD Secondum and Sever PHT (Figure 4). Chest x-ray repeated many times due to her long stay in PICU where is showed only picture of Pneumonia as in (Picture 1). And echo done with her repeated cyanosis result shown in (Figure 4). During her stay in PICU, she had frequent apnea and cyanosis with aspiration pneumonia ventilated and CT chest (Picture 2) was requested there was no significant finding apart from infection. Patient improved after course of antibiotic and no mores cyanosis, discharge from the hospital on Oxgen Readmitted after 2 months at age of 4 months with chest infection and respiratory distress, Chest X-ray and repeated CT scan done same finding with Barium study result shown in (Figurer 1A and B). Patient was in and out from hospital with no clear diagnosis with invasive work up, later at age of 2 year repeated CT scan with contrast done and showed Bochdalek hernia which surprises us was not clear initially (Figure 3). 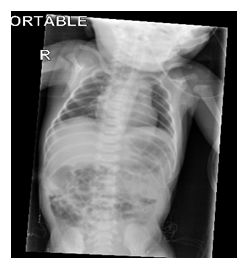 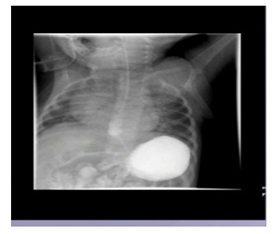 moderate GERD, No evidence of malrotaion 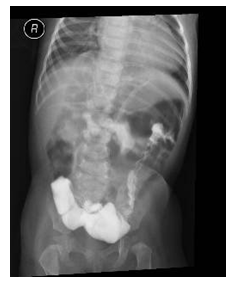 No significant transition of Zone no delay or obstruction. no pathological filling defect seen 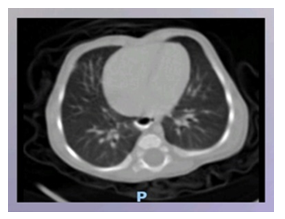 Picture 2: A CT scan of the chest normal study apart from Persistent left side SVC is noted.

ECG: 12 lead ECG of with large ASD and volume overload of the right heart chambers. Subtle peaking of the p wave is notable. Incomplete right bundle branch block and right axis deviation of the QRS vector is also present (Picture 0). 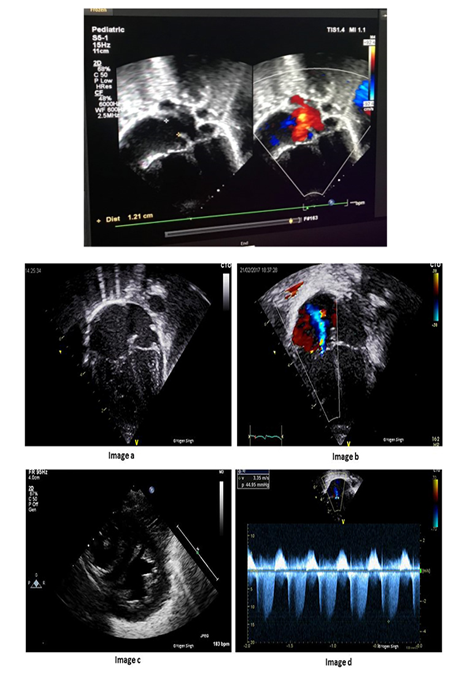 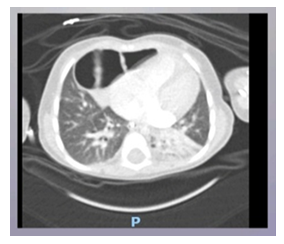 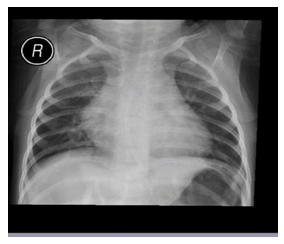 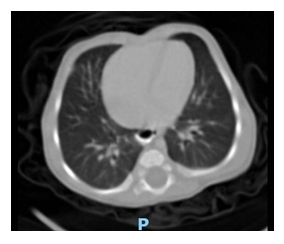 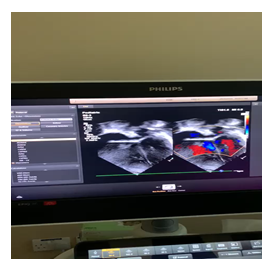 Morgagni herniais the rarest of allCDH, presenting mostly in childhood. Morgagni hernia is a rare congenital malformation, [1, 2] and surgical treatment should be attempted before the appearance of complications. The resection of the hernia sac is not imperative. The postoperative course is usually uneventful and recurrence is rare[3, 4]. The defect in the diaphragm is generally located on the right side (90%) or bilaterally (7%); occasionally it may be on the left side, although the presence of both heart and pericardium are a barrier against herniation [3, 4]. Most patients are asymptomatic until adulthood. The lesion rarely presents during the neonatal period, in which case it leads to severe respiratory distress, sometimes associated with anomalies in other Most of the cases of Morgagni hernia are diagnosed incidentally on a chest radiograph Our patient was in seemingly good clinical health at birth and during his first 0ne months of life. Her chest X-ray at birth was reported as normal, probably because the abdominal bowel loops were not yet herniated through the foramina of Morgagni in the diaphragm. At about one months, the patient developed acute respiratory distress. She was examined first in a small suburban hospital, where the diagnosis of congenital heart disease was posed based on his echocardiography findings. It was reported in the patient’s notes that chest radiography had been performed was normal report Picture 1, our patient, born with Morgagni’s CDH, showed severe respiratory distress due to both pulmonary hypertension Figure 4 and pulmonary hypoplasia. is a restriction of blood flow through the lungs, thought to be caused by both external compression and anomalies in the pulmonary alveoli, frequently encountered in this condition. Pulmonary hypoplasia, or decreased lung volume, is directly related to the presence of abdominal organs in the chest cavity, which makes the lungs severely undersized, particularly on the side of the hernia. In addition, compression of the right ventricle from the front mimicked echocardiographic findings, suggesting the presence of large ASD (ostium secundum) and Sever PHT. In our case she was present early as respiratory symptoms although the investigation was done and repeated many times but was difficult to detect the defect. She was diagnose late at age of 2 years old with repeating CT chest with contrast Figure 3 and her defect corrected with open laparotomy [5]. ASD closure by device • follow-up echocardiography was consistent with no shunt through atrial septum • normalization of pulmonary pressure, a normal right ventricle • stable no respiratory distress increase weight condition and with an oxygen saturation 98% (Figuer 6).

If Morgagni’s CDH, symptomatic or A symptomatic can mimic respiratory or cardiovascular diseases. Abdominal pain is seen in cases where the viscera get strangulated or incarcerated. Most commonly the herniated mass comprises of omentum followed by the colon and small intestine [6]. The investigation of choice for cases like this is CT scan of the chest. It is preferred as it can provide the anatomical details of the hernia, its contents and its complications if any. In cases of diagnostic difficulty, Magnetic Resonance Imaging (MRI) has been reported to be used to differentiate CDH from othermediastinal mass which was not done in our case The defects were repaired using the abdominal approach, and the procedure consisted of a simple reduction of the hernial content and direct closure of the hernia with non-absorbable sutures without sac resection or drainage. The diaphragmatic defect was on the right side there were no postoperative complications or mortality in these cases and the remaining sac resolved completely before the end of the one month from operation. No recurrence was noticed, the follow-up ranged between six months to 0neyear with a mean of 2 years [7].

Morgagni herniais a rare type ofCDHwhich is usually identified in childhood. It can present with acute chest symptoms. Morgagni Hernia should be suspected in recurrent undiagnosed respiratory symptoms. Primary surgical repair is the treatment option in symptomatic and asymptomatic patient. A normal chest x-ray in a child does not mean that a morgagni hernia cannot develop in that patient.