A Case of Large Gastric Trichobezoar: Case Report and Review of Literature

#Both the authors contributed equally

Trichobezoars are concretions of swallowed hair retained within the digestive tract, most commonly the stomach. They predominate in young females during childhood and adolescence and are usually associated with psychiatric illness. These usually develop insidiously and hence at presentation are large in size. In this report, we present a case of a young female patient with large 17.5 × 12.2 × 5 cm trichobezoar that had to be surgically removed.

Trichobezoars are concretions of swallowed hair retained within the digestive tract. Psychiatric illness and mental retardation are commonly associated with trichobezoars [1]. The consumed hair is retained between the gastric folds and resists peristaltic movement due to its slippery surface [2]. The hair is then denatured by gastric acid, becomes black due to oxidation and compacted with food to form an enmeshed mass [3]. The insidious development of trichobezoar accounts for the delayed presentation and large size at the time of diagnosis [4]. Some types of bezoars, including small trichobezoars, can be removed endoscopically. Larger trichobezoars are typically resistant to endoscopic fragmentation due to the dense hair mass and require surgical removal. Here we present case of a young patient with large trichobezoar that had to be surgically removed.

A 20-year-old female was referred to the surgical clinic with newly diagnosed epigastric mass. She was high functioning, took no regular medications and had no prior medical history. Upon further questioning, the patient reported trichophagia up until the age of 13 years. She denied any abdominal pain, nausea or vomiting. Her bowels had been functioning well. She reported weight loss of approximately 20 kg over a 12-month period which she attributed to diet and exercise. On examination, the patient was of thin built, with no visible alopecia. A large, firm epigastric mass was palpated which was mobile and non-pulsatile. The patient’s blood tests were all within normal range. She underwent an ultrasound which showed a large, partially calcified mass measuring 11 × 9 × 7 cm within the stomach which not visible on x-ray. A follow up MRI scan (Figure 1a and 1b), given patient’s age, showed a well-defined, smooth-contoured mass within the lumen of the stomach with low signal on T1, low signal on T2 and internal heterogeneity. Its dimensions were 17.5 × 5.1 × 12.2 cm and were entirely surrounded by fluid. 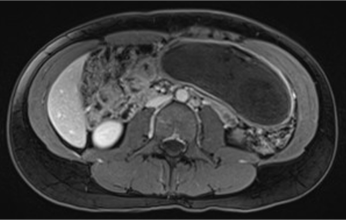 Figure 1a: MRI abdomen in axial view showing a large mass within the stomach. 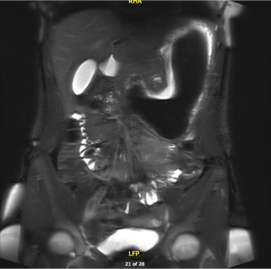 Figure 1b: MRI abdomen in coronal view showing a large mass within the stomach with fluid in stomach outlining the shape of the mass.
Subsequently, the patient underwent gastroscopy to investigate this mass further. This revealed a large trichobezoar extending from the stomach into the duodenal bulb (Figure 2). Given the size, it was decided that patient should undergo an open operation to remove the trichobezoar. Patient underwent mini laparotomy and open gastrostomy to remove the large trichobezoar (Figure 3). The patient recovered well post-operatively and was discharged home 5 days later. 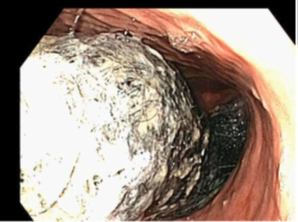 Figure 2: Endoscopic view showing a large trichobezoar within the stomach. 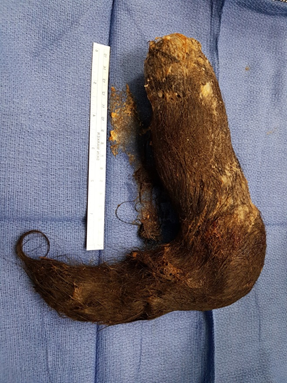 A bezoar is an indigestible mass of foreign material found within the digestive tract, most commonly in the stomach. Bezoars are named based on their components [5]. Phytobezoars ? the most common type of bezoar ? are comprised of vegetable matter high in cellulose, hemicelluloses and other proteins. Trichobezoars (hair), pharmacobezoars (medications) and lactobezoars (milk products) are more uncommon types of bezoars. The first trichobezoar was described by Baudamant. Rapunzel syndrome, first described by Vaughn et al., is used to describe a trichobezoar which extends into the small intestine due to its long tail [6].

Trichobezoars predominate in young female during childhood and adolescence and are strongly associated with psychiatric illnesses, in particular trichotillomania and trichophagia [7]. Consumed hair remains in the digestive tract as its slippery surface allows it to escape peristaltic movement [8]. Gastrointestinal mucous makes the trichobezoar shiny while hair turns black as it is oxidised and denatured. As hair consumption continues, peristalsis enmeshes the hair with food with the foreign body gradually taking the shape of the lumen [1, 9]. By occupying space within gastric lumen, food consumption is restricted and patients often experience weight loss. Trichobezoars may also case halitosis as they become colonised with bacteria [3, 9].

Abdominal imaging is useful for determining if multiple bezoars are present. Computed tomography is often the imaging modality of choice and typically shows a well-defined heterogeneous mass interspersed with air within the lumen, with bowel distension if there is an element of obstruction [9]. There are few cases in the literature describing the MRI findings of trichobezoars [10].

Treatment of bezoars differs depending on their composition. Chemical dissolution works well for phytobezoars and is first line treatment; however it is not useful in managing trichobezoars [7, 8]. For phytobezoars resistant to chemical dissolution and trichobezoars, endoscopic fragmentation using a variety of instruments or lithotripsy can be used [5]. For bezoars that are resistant to endoscopic management or for patients that present with complications, surgical removal is indicated. Laparotomy and gastrotomy has produced the best results; however less invasive laparoscopic techniques have also been published [1, 3, 8].

Our patient underwent laparotomy and gastrotomy to remove the trichobezoar due to its size. She was followed up in the clinic four weeks post-operatively and was recovering very well.