We report a case of 45 years old male, presented with intermittent poorly localised dull aching right upper quadrant pain abdomen for the last 1 year. Each episode used to last for 5-6 hours, only to get terminated with oral analgesics. It was associated with non bilious vomiting. The frequency of pain abdomen was 1-2 times per month for the first 6 months, which increased in frequency in the last 2 months requiring oral analgesics on a regular basis and multiple hospitalisations. He had episodes of intermittent jaundice with acholic stools for the past 9 months. He had lost 10kg of weight in the past 1 year. He used to consume alcohol for the last 10 years with daily consumption of 2-3 drinks of country liquor. On examination, he had icterus and tenderness in the right upper quadrant. Hematological investigations revealed Hb-12g%, Total leucocyte count-7600 /micL, Platelets-1.6 lacs/micL. Liver function test revealed Bilirubin (Total/Direct)-5.4/3.9 mg/dl; ALT-320U/L, AST-300 U/L, ALP-657 U/L, Total Protein-8.3 g/dl, Serum albumin-4.4 g/dl, normal serum Amylase. Trans abdominal ultrasound showed dilated intrahepatic biliary radicles & dilated common bile duct (CBD). There was a 3 × 2.5 cm hypoechoic heterogenous mass noted in the head of the pancreas with dilated Main Pancreatic Duct (MPD). Contrast enhanced CT scan (Figure 1) revealed a well defined patchily enhancing heterogenous mass lesion (35 × 34 × 32 mm) in the head of pancreas extending into the uncinate process with necrotic areas within. MPD was dilated (6 mm in head). Serum CA 19-9 was low (4.51 U/ml). For further delineation of the mass and tissue diagnosis, Linear Endoscopic Ultrasound (EUS) was performed. It revealed the same heterogenous pancreatic head mass with dilated CBD (12 mm) and dilated MPD (5 mm at body) (Figure 2). EUS guided FNAC was done from the mass. Histopathological examination revealed sparse cellularity in a necrotic background with scattered foreign body type giant cells (Figure 3) with few monolayer sheets of benign ductal cells. Fungal profiles are seen in background with pseudohyphae and budding yeast forms suggestive of invasive Candida infection (Figure 4). He was started on IV amphotericin and he recovered well. 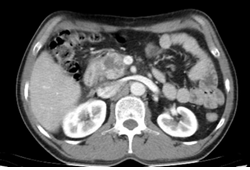 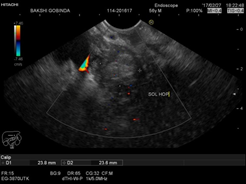 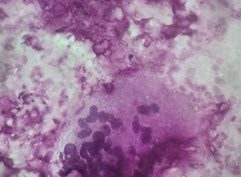 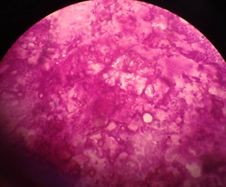 Bacterial and fungal infections of the pancreas are well documented complications in the setting of severe acute pancreatitis. It is one of the leading causes of mortality in acute necrotising pancreatitis [1]. Candida sp. is the most common species causing fungal infection of the pancreas. Intra-abdominal Candida infection is associated with a four-fold greater mortality rate compared with intra-abdominal bacterial infection alone in patients with acute pancreatitis1. Important risk factors for fungal infection in patients with acute pancreatitis include broad-spectrum antibiotics, prolonged hospitalization and surgical/endoscopic interventions, use of total parenteral nutrition, and mechanical ventilation [2]. Other conditions that result in an altered host immune system such as steroid therapy, chemotherapy, acquired immunodeficiency syndrome (AIDS), immunosuppression therapy after organ transplantation, advanced age, and comorbid illnesses such as diabetes mellitus also predispose patients to fungal infection [3]. Though, the patient described above had history of frequent use of alcohol and presented with intermittent pain abdomen, there was no biochemical or radiological evidences to support acute pancreatitis. There was no evidence of pancreatic necrosis as well. The patient was apparently immunocompetent. Therefore, the unique feature of this case is the occurrence of fungal infection in non necrosed pancreatic parenchyma.

Among various sources of pancreatic fungal infections, Candida is the most common causal organism, followed by Torulopsis species [3]. The incidence of Candida infection in acute pancreatitis has been reported to range from 12% to 41%. Diagnosis of pancreatic infection is made when infective organisms are identified from aspirate or blood culture. However, routine blood cultures are positive in only 50% of patients with tissue-proven disseminated candidiasis [4]. In our case, we identified fungal elements like pseudohyphae, budding yeast forms from the aspirated sample. These were suggestive of Candida infection. Moreover, presence of foreign body type multinucleated giant cells was suggestive of tissue reaction to the infection.In this case, the patient presented with features of extrahepatic biliary obstruction, with a mass in the head of the pancreas. We kept carcinoma head of pancreas, solid pseudopapillary tumor and cystic pancreatic neoplasm with solid components and chronic pancreatitis in the differential diagnosis keeping in mind the clinical presentation. However no definitive radiological evidences of chronic pancreatitis were found.

In conclusion, we suggest that pancreatic candida infection can present in a similar fashion as pancreatic neoplasms. Pancreatic fungal infiltration should be kept in the differential diagnoses in these cases.