In the present study, medical CT images were utilized to develop 3D-computational models of hip joints and femoral bones. The finite element analysis was then performed to characterize the biomechanical problems associated with the bone models. The FEA results clearly exhibited dramatic changes of stress and SED profiles due to osteoarthritis and hip arthroplasty. Furthermore, a damage modelling was also introduced into the FEA to characterize the fracture problems of femoral bone with prostheses under a downstairs step and sideways fall conditions. Micro-damage formations are well predicted in the vicinity of the prostheses for bone cases. It is thus confirmed that CT-FEA can be very useful to understand the biomechanical problems in the field of orthopaedics.

Computed tomography (CT) scan makes use of X-ray images to produce cross-sectional images of specific areas of human body. These sliced images can be utilized to construct the 3D structure of the area by layering each images in the direction perpendicular to the slicing. For example, 3D structures of skeleton can be developed by selecting bone parts from the CT images. The intensity of each image is directly related to the bone mineral density (BMD) distribution and a bright region usually corresponds to a higher BMD. It has been established that a simple linear relationship can be assumed between the CT values (Hounsfield unit) and BMD; therefore, it is possible to easily estimate the BMD distribution on each image. Furthermore, it is also possible to construct a 3D computational model of the bone with BMD distribution for finite element analysis (FEA) [1, 2].

Such CT-image based EFA (CT-FEA) has widely been utilized to characterize biomechanical problems associated with orthopaedic [2-6] and dental sciences [7, 8], in which diseases related to bones are mainly treated. Bones mainly consist of organic and inorganic mineral components such as collagen and carbonate apatite. It has been believed that the apatite determines the stiffness and strength of the bone structures, and therefore, the bone mineral density (BMD) can be a controlling parameter in the biomechanical analysis of skeletal structures. Interactive problems between bone structures and metal implants have also been investigated by CT-FEA since such problems are strongly related to mismatching of elastic modulus between the material and bone tissue and/or stiffness between the implant and bone structure.

In this paper, two different biomechanical problems associated with hip arthroplasty are presented. One is biomechanical analysis of stress shielding, which is one of the most important mechanical problems associated with orthopaedic metal implants (Figure 1a). In this problem, bone tissue surrounding the metal implant such as a stem of hip prosthesis is gradually absorbed due to the mismatching of stiffness between the bone and stem. The reason is thought to be the reduction of mechanical stimulus to the bone due to the small deformation of stem with high stiffness. Another problem is fracture of bone associated with hip prostheses as shown in Figure 1b. CT-FEA was applied to analyse those two kinds of problems. 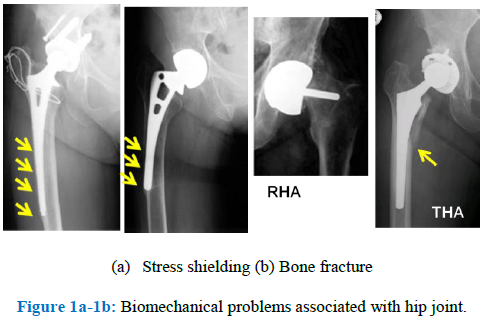 An example of 3D hip joint model constructed from CT images of 52 years old patient is shown in Figure 2. The CT images were provided by Kyushu University Hospital. This female patient has been suffered by osteoarthritis of right hip joint. The computational modelling was conducted by using Mechanical Finder software (RCCM, Inc.). Distribution of bone mineral densities (BMD) were estimated from CT values of each of the images by assuming a linear relation between the CT values and BMD. Then, the elastic modulus of a finite element was evaluated from the average value of BMD of the element on the basis of Keyak’s model [1]. The elastic modulus distributions of the right and left hip joints are shown in Figure 3. It is worth noting that inhomogeneous realistic distributions of modulus were clearly reproduced in the 3D finite element models.

A virtual model of total hip arthroplasty (THA) can be developed by using the current hip joint model and CAD images of hip prosthesis. Osteotomy was applied to the hip joint model so that the hip prosthesis can properly be inserted and placed into the femur and pelvis. The schematic procedure of the 3D THA modelling is shown in Figure 4a. A simple boundary condition corresponding to a stance situation was introduced into the THA model as shown in Figure 4b. Distributed load of 1800 N was applied to the top of the pelvis. 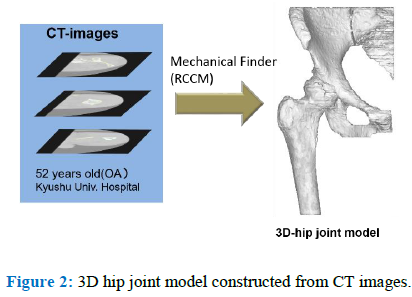 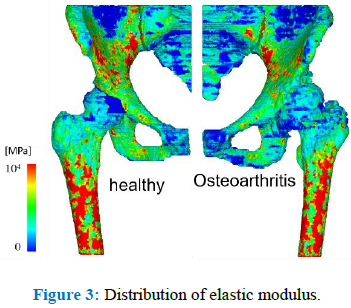 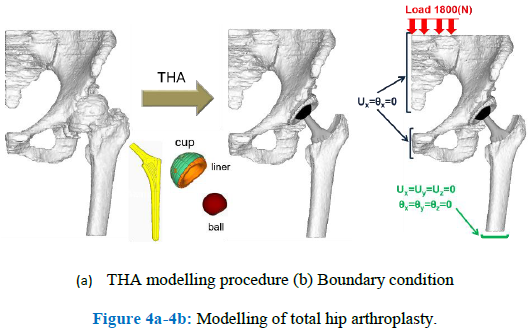 In order to analyse bone fracture associated with hip arthroplasties, a whole femoral model was also developed from CT images of a 54 years old male. Resurface hip arthroplasty (RHA) and THA were then treated to the femoral model as shown in Figure 5. As the boundary conditions, two different situations such as downstairs step and sideway fall were assumed and simplified conditions were applied to the model as shown in Figure 6. A damage model was also introduced into the FEA code in order to predict bone fracture by damage accumulation. It was assumed that each of the finite elements could be damaged under both tensile and compressive situations. Under tensile condition, the bone tissue was assumed to be a linear elastic and brittle so that the maximum principal stress controlled the tensile fracture. The tensile fracture took place when the maximum principal stress reached its critical value. On the other hand, the bone tissue was assumed to be an elastic-plastic body under compression, and therefore, the equivalent stress controlled the yielding behaviour, while the compressive fracture occurred when the minimum principal strain reached its critical value. The elastic modulus of the tensile and compressive fractured elements was set to be the minimum value of the elastic moduli in the model. 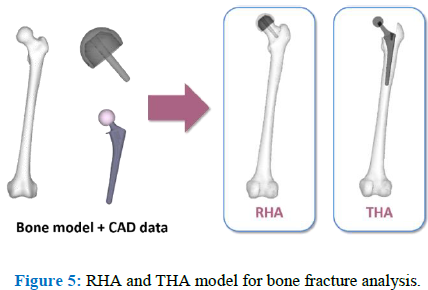 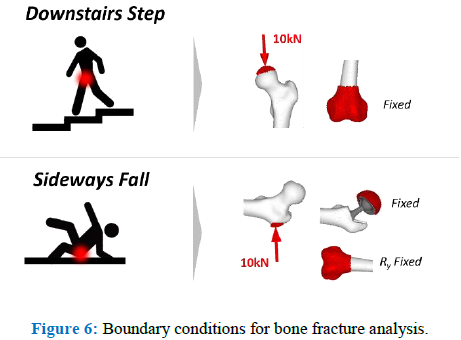 Distributions of the strain energy density (SED) on the cross-sectional areas of the normal, abnormal (OA) and THA femur are shown in Figure 7. It is seen that SED is severely concentrated in the neck of the OA femur due to severe deformation of the femoral head and neck. On the contrary, SED is extensively reduced in the THA femur as a result of stress shielding. The kind of SED reduction corresponds to the reduction of mechanical stimulus to the bone tissue, resulting in activating bone resorption behaviour and reduction of BMD. Such SED reduction is clearly shown in Figure 8a where SED is plotted along the line from the lesser trochanter to the lower edge of the femoral models. Drastic reduction of SED is observed in the THA femur, while severe SED concentration appears in the abnormal model. Such SED concentration may accelerate the OA and deformation of the femoral head and neck. Schematic illustration is presented in Figure 9. Old bone is resorved by osteoclasts and cavities are created. Then, osteoblasts try to create new bone tissue consisting of type I collagen and carbonate apatite crystals. Reduction of mechanical stimulus tends to break such balanced remodelling cycle.

In the field of biomaterials, it has been considered that one of the most effective ways to avoid the stress shielding is to reduce the elastic modulus of the stem material, Ti alloy. Currently, the modulus of Ti alloy has successfully been reduced up to around 50 GPa without sacrificing other mechanical properties. The effect of such modulus reduction on the SED distribution in the femur is shown in Figure 8b. SED effectively increased due to the reduction of modulus, suggesting improvement of mechanical stimulus. 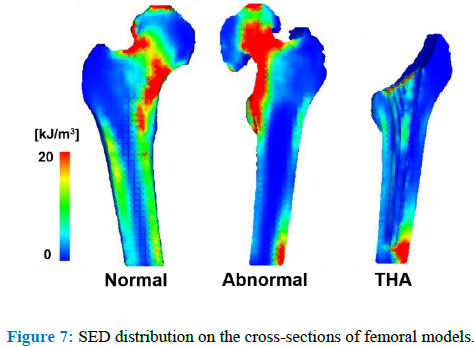 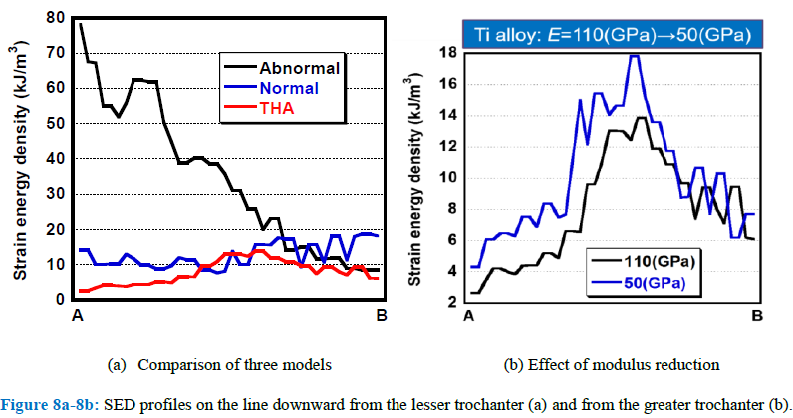 Distribution of failure elements in the RHA and THA models under two different loading conditions are shown in Figure 10. Under the downstairs, the RHA model shows damage formation along the interface between the head and bone. Elemental damages are also observed in the vicinity of the stem. This damage accumulation may be related to loosening of the implant or fracture of femoral neck. In the THA model, damages are generated in the top region of bone close to the stem, suggesting that loosening of stem may occur due to such damage accumulation. Under the sideway falls, most of damages are generated in the great trochanter at which the load is applied directly. Furthermore, extensive damages are also observed in the femoral neck of the RHA model, suggesting that neck fracture can take place under the sideway falls condition. 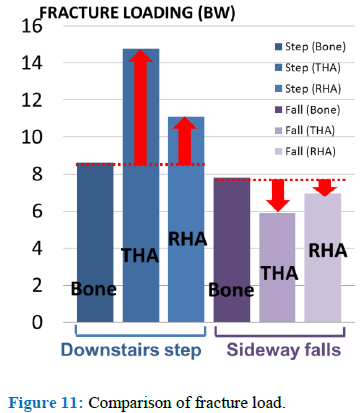 CT-image based finite element analysis was applied to analyse the biomechanical problems associated with hip joint and hip arthroplasty. The results obtained are summarized as follows: