As a result, we showed the importance of drug-drug interaction related to CYP3A4 isoenzyme that has an affect on drugs used in cardiovascular diseases. In conclusion, although we found lots of drug-drug interactions related to CYP3A4 isoenzyme on cardiovascular drugs, future studies should be done for exact information about this topic.

In order to produce the desired therapeutic effect with minimal side-effects and with the possible lowest dose, drugs should be administered at right time, with optimal formulation and to the right patient. In addition to these factors, the cytochromes P450 (CYPs) enzyme system, especially found in liver affects the therapeutic response by the capability to catalyze the oxidative biotransformation of most drugs and other lipophilic xenobiotics. Until now, 57 different CYP450 isoenzymes have been documented to be present in humans, with 42 involved in the metabolism of exogenous xenobiotics and endogenous substances such as steroids and prostaglandins [1]. Some substrates of CYP 450 isoezymes are shown in Table 1 [2]. 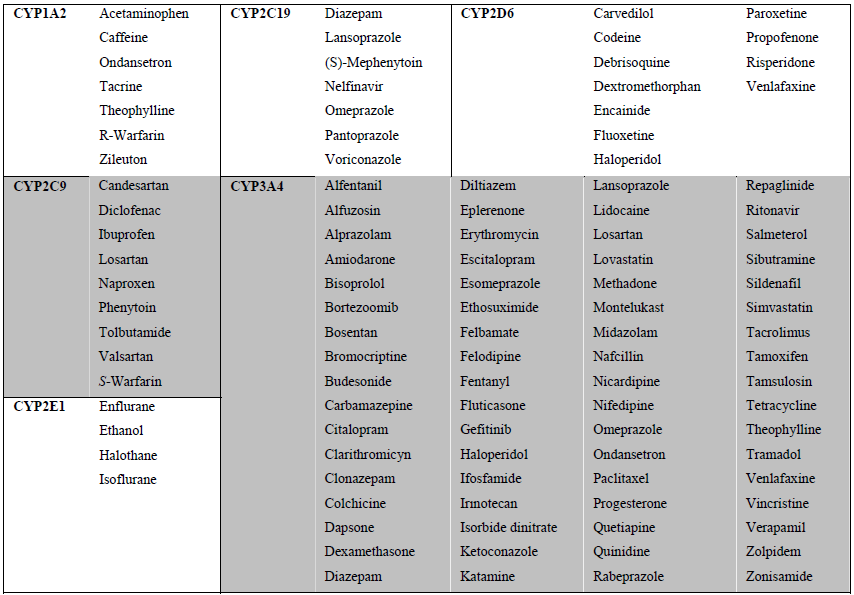 However, among all types of isoenzymes CYP3A4 is at the forefront [2]. As a result, knowledge of the intrinsic and extrinsic factors that influence expression and function of the responsible enzymes is prerequisite for predicting variable pharmacokinetics and drug response and these show relevance for clinical pharmacology [3].

Drugs used for the treatment of cardiovascular diseases are influenced by several factors like physiologic, genetic, environmental and drug-drug interaction factors. However, for metabolism of drug in liver, the most important factor is drug-drug interaction caused by induction or inhibition of CYP3A4 system. The objective of this commentary is to cover the importance of CYP3A4 isoenzyme especially in cardiovascular drugs.

A literature search was performed using PubMed, MEDLINE, Web of Science, and the Cochrane Library to analyze the pharmacokinetic drug-drug interactions associated with CYP3A4 isoenzyme. Drug interactions may be most apparent when patients are stabilized on the affected drug and the CYP3A4 inhibitor is then added to the regimen. Temporal relationships between the administration of the drug and CYP3A4 inhibitor may be important in determining the extent of the interaction [4].

Lots of studies are found between CYP3A4 isoenzyme and about cardiovascular drug interactions at the level of microsomal enzyme metabolism. In a study conducted by antiarrhytmic agent dronedarone and its metabolite N-desbutyl dronedarone (NDBD) which are used for the treatment of atrial fibrillation, inactivate mainly CYP3A4 and also CYP3A5 via unique dual mechanisms of mechanism-based inactivation (MBI) and formation of the metabolite-intermediate complex depend on time, concentration, and NADPH [5].

Additionally, we all know that HMG-CoA reductase inhibitors decrease plasma cholesterol and LDL levels. We searched 12 articles about HMG-CoA reductase inhibitors and we summarized in general that bioavailability of nifedipine was increased via inhibition of CYP3A4 in the small intestine and/or liver and also total body clearance of nifedipine was reduced by fluvastatin and simvastatin [6]. A nationwide cohort study demonstrated the increased risk of adverse events following the coprescription of CYP3A4-metabolized statins (simvastatin, lovastatin, and atorvastatin) and CCBs (amlodipine, diltiazem, felodipine nicardipine, nifedipine, and verapamil) that inhibit CYP3A4 and should cause acute kidney injury, hyperkalemia, acute myocardial infarction and acute ischemic stroke than those who received non-CYP3A4-metabolized statins [7].

However, other study on the interactions between clopidogrel and statins (simvastatin and fluvastatin) wes examined. According to the results, especially simvastatin which are metabolized by CYP3A4 isoenzyme, taken in combination with clopidogrel, there was no CYP-3A4 mediated interaction between them [8]. Statins like simvastatin, atorvastatin are also known as affected agents for the prevention of cardiovascular diseases and have some side effects due to its being substrate of CYP3A4 isoenzyme. In a study conducted by patients with abnormal thyroid hormone status, statin-induced side effects were reduced if the thyroid hormone levels in plasma were normalized [9].

In addition to this, aspirin is used for prevention of atherosclerosis that can contribute to the development of hyperlipidemia like many cardiovascular diseases and aspirin induces CYP3A4 activity at low doses and leads to reduction in bioavailability of nifedipine significantly [10, 11] . Furthermore, as we know, amlodipine is an important CCB, too. It is metabolized with CYP3A4 isoenzyme. We searched drug interaction between amlodipine and macrolide type antibiotics clarithromycin and azithromycin. While clarithromycin has inhibitory effect on CYP3A4, whereas azithromycin does not. In a study, CCB- amlodipine- was given with both macrolide antibiotics and serum concentration of amlodipine was monitorized. The results showed that concurrent use of these drugs didn’t change the level of amlodipine, significantly [12]. Searched clinical and preclinical studies showed that, CCBs and statins are not innocent drugs when used in combination with other drugs in general.

Moreover, thiazide diuretics are well known first choice diuretics used in hypertension and congestive heart failure treatment. Thiazide like diuretic metalozone, used in treatment of these illnesses, activated human PXR (hPXR)-mediated CYP3A4 expression in human hepatocytes and intestine cells at both mRNA and protein levels and researchers defined that doses of drugs that are metabolized with CYP3A4 should be adjusted [13].

In a peer-reviewed study, antianginal drug ranolazine was discussed in the different aspects and authors reported that ranolazine was not only used in chronic stable angina but also used in diabetes mellitus due to its reducing effect on HbA1c and its decreasing potential cardiovascular death myocardial infarction, and recurrent ischemia. On the ohter hand, ranolazine should not be used with potent CYP3A4 inhibitors because its plasma concentration increases and causes toxicity [14].

We also searched drug interaction of bosentan used in treatment of pulmonary hypertension. Because it has serious liver problems, it impairs metabolism of other drugs. For instance, when glyburide and treprostinil are given in combination with bosentan, their metabolisms induce. Additional studies showed that these combinations are contraindicated in some cases [16-18].

Other antihypertensive drug category is alpha receptor blockers. They also used in benign prostate hyperplasia. Performed clinical and preclinical studies showed that alpha receptor blockers interact with other drugs and change their and its own plasma concentrations and metabolisms Indeed, combination and solely use of ketoconazole and tamsulosin, ketoconazole increased the plasma concentration of tamsulosin through inhibition of CYP3A4 isoenzyme in liver [20, 21]. However, it was explained as safe, but requires monitoring for cardivoscular hemodynamics. Inconsistent with other studies, when tamsulosin was given with boceprevir, its plasma concentration of tamsulosin was increased through inhibition of CYP3A4 [22]. The clinical importance of any drug interaction depends on factors that are drug, patient and administration-related. Generally, a doubling or more in plasma drug concentration has the potential for enhanced adverse or beneficial drug response. Less pronounced pharmacokinetic interactions may still be clinically important for drugs with a steep concentration-response relationship or narrow therapeutic index. In most cases, the extent of drug interaction varies markedly among individuals; this is likely to be dependent on interindividual differences in CYP3A4 tissue content, pre-existing medical conditions and, possibly, age. Interactions may occur under single dose conditions or only at steady state. The pharmacodynamic consequences may or may not closely follow pharmacokinetic changes.

Genetic and nongenetic factors affect individual variability of a drug response by modulating the dose-response curves of drug efficacy and drug toxicity of patients. Clinical outcome is altered if drug dose is not adjusted accordingly. Genetic factors generally cause permanent changes in protein functions, whereas environmental and physiological factors and their impact on drug response are transient in most cases. However, cytochrome enzyme system-dependent drug metabolism is likely to be the most important source of individual variability in drug efficacy. Inhibition or induction of CYP system, especially CPY3A4 isoform, plays important role in differences of drug pharmacokinetics that alter the concentration of a toxic drug or metabolite in the target tissue to cause variable toxicity.

This research did not receive any specific ground from funding agencies in the public, commercial, or not-for-profit sectors.

The authors reported that there is no conflict of interest and authors contributed equally to this study.