Development of Myofibrosarcoma after Removal of Longstanding Chemotherapy Port

We present a case report of a patient who developed a myofibrosarcoma after removal of a left-sided chemotherapy port which was place ten years prior for the treatment of a right sided-breast cancer. The patient developed a new left-sided breast cancer and after surgical resection of the left breast cancer, she presented with a rapidly growing mass; a high grade sarcoma was diagnosed after definitive resection. We also review the literature in foreign body- associated sarcomagenesis.

A retrospective review of the clinical case was ascertained via electronic medical records. A PubMed search was used to review the literature published from 1956 to 2016 using the keywords: implant, myofibrosarcoma, myofibroblast, sarcoma, long-term, surgery, heal, growth factor.

In 2007, a 57-year-old female with locally advanced infiltrating ductal carcinoma of the right breast underwent neoadjuvant chemotherapy via an implanted portacath inserted into her left internal jugular vein. After surgery and radiation, she was followed by medical oncology while on hormonal therapy. Despite a plan to remove the port at least 2 years prior, it was not removed until 10 years after insertion. One month after an uneventful port removal, the patient was diagnosed with a new left infiltrating ductal carcinoma which was treated and staged with left total mastectomy and sentinel lymph node biopsy, respectively.

Three weeks after the left total mastectomy, her physical examination was notable for a small, mobile, soft tissue nodule at the previous port site on the left anterior chest wall inferior to the clavicular head. Two months later, the nodule was noted to be 3 cm in diameter. Despite a benign percutaneous biopsy result, the subcutaneous mass continued to grow rapidly to 7 × 4 cm with overlying skin ulceration within the following 2 weeks. A wide local excision of the mass was performed and pathological diagnosis revealed a “high grade sarcoma, favoring myofibrosarcoma” (Figure 1, 2 and 3). All margins were widely negative except a region near the posterior margin near the fibrous sheath of the previous port. The patient subsequently underwent surgical excision of the prior port fibrous sheet en bloc with a small portion of the internal jugular vein. The final pathology revealed no residual malignancy. 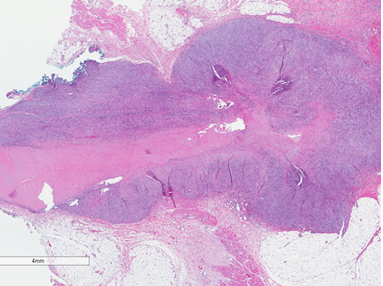 Figure 1: Low magnification of the surgical resection shows the fibrous tract from where the foreign body was removed. Surrounding this fibrous tract is a hypercellular mass with pushing infiltration into the surrounding subcutaneous fat and soft tissues. (Hematoxylin and Eosin Stain). 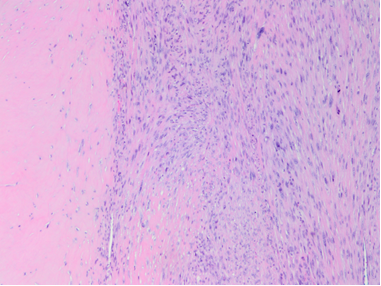 Figure 2: Medium magnification of the surgical resection at the interface of the fibrous tract and the hypercellular mass shows a spindle cell lesion with short fascicles. (Hematoxylin and Eosin Stain at 4x Magnification). 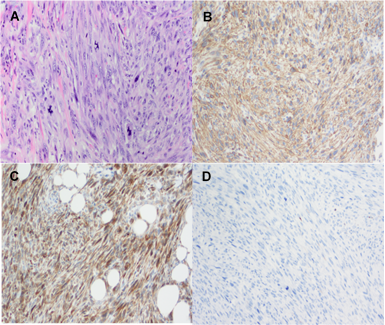 A review of the literature suggests a possible association between foreign bodies retained for a prolonged time frame and sarcomagenesis. However, the mechanism of FB-associated tumor development is not known, but many types of sarcomas have been described in the literature. To our knowledge, however, our case is the first to report a longstanding FB-associated myofibrosarcoma developing after FB removal followed by a major surgical intervention.

One published review of 40 case studies [1] of FB sarcomagenesis from 1956-1988 demonstrated an average latency of 14.12 years. Another published review of 22 case reports from 1956 to 1991 demonstrated an average latency of 10.89 years for soft tissue sarcomas associated with orthopedic implants [2]. Interestingly, however, these authors also performed a case-control study on 816 men diagnosed with a soft tissue sarcoma and found no significant relationship between implants and the diagnosis of a sarcoma, suggesting that other events may be involved in tumor development.

We hypothesize that tumor initiation and growth may accelerate post-surgery via growth factors related to wound healing. It is widely recognized that inflammation is an essential component of tumor development [3]. Tumor growth may be initiated via inflammatory responses in the body such as that involved in wound healing or surrounding an implanted foreign body [4, 5]. Thus, acute inflammation and wound healing mechanisms incited by a recent surgical intervention at the site of a long-standing implanted foreign body may be sufficient to initiate sarcomagenesis.

Based on this report and literature review, the differential diagnosis for a mass forming at the site of a current or previous implantation should include FB-associated sarcoma, especially with a recent history of surgery. Case reports infer a long latency period after placement of implanted devices, supporting prompt removal of unused devices. Patients who have a medical need for their device long term should be monitored and educated on the signs and symptoms of FB-associated sarcomagenesis.