Imaging Findings of Solitary Plasmacytoma of the Cranium

Solitary plasmacytoma of bone (SBP) are extremely rare and limited in the English literature. The most common locations in the skull are sphenoid bone, juxtasellar region, petrous apex and cerebral convexity or falx. SBP has higher risk of advancing to Multiple Myeloma within the duration of 2-4 years. Here we report two cases involving the cranium, both the cases initially mis-diagnosed as meningioma and after histopathology report confirmed as plasmacytoma. Further laboratory investigations were made to rule out multiple myeloma and its systemic involvement. We will also further discuss about the CT and MRI features and the most common differential diagnosis of SBP.

1. Introduction
Solitary plasmacytoma is an early stage malignancy with a clinical course that lies between MGUS (monoclonal gammopathy of undertermined significance) and multiple myeloma (MM) in the spectrum of plasma cell dyscrasia. It has been divided into two types: one that grows within the axial skeleton known as solitary plasmacytoma of bone (SPB) and the other within soft tissue called extramedullary plasmacytoma (EMP). Skull involvement occurs mainly in cranial vault, skull base, dura and orbit [1]. Cranial vault and cranial base lesions are suggested to have higher risk of evolution to MM than dural lesions [1]. SPB is the commonest variety and accounts for 3-5% of all plasma cell malignancies [2-4]. Here we report two cases involving the cranium, both the cases initially diagnosed as meningioma and after histopathology report confirmed as plasmacytoma. Further investigations were done to rule out MM. 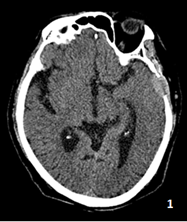 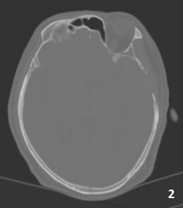 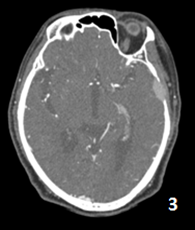 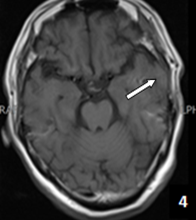 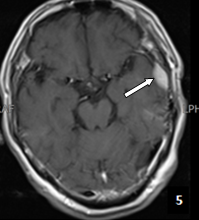 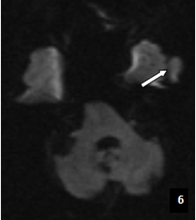 3. Case II
A 45-year-old male presented with complains of dizziness lasting for few minutes since more than 6 months. There were no associated symptoms of headache, nausea and vomiting. However, in the past 3 months he had gradual blurring of vision with diplopia. He also developed numbness in his right lower extremity. Neurological examination didn’t reveal any verbal and auditory abnormalities. 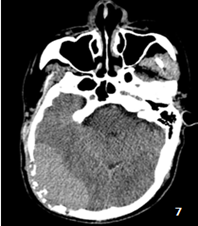 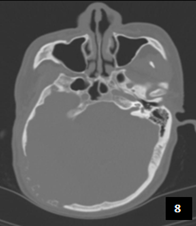 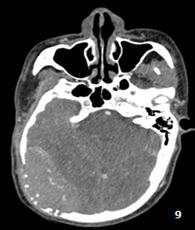 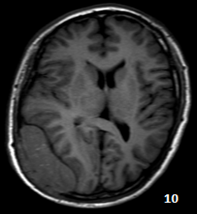 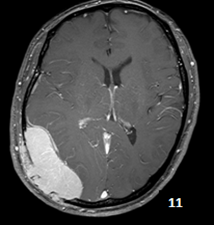 4. Discussion
Solitary plasmacytoma of bone is rare [2, 3]. Incidence rate rises with advancing age; however compared to MM, it is less common at older age. The incidence rate of SP in black race is around 30% higher than white race [2]. Plasmacytoma is further sub-categorized by International Myeloma Working Group (IMWG) into (i) solitary plasmacytoma of bone (SPB); (ii) extramedullary plasmacytoma (EMP), and (iii) multiple plasmacytomas [2,3]. Histologically, plasmacytoma and MM demonstrates cellular resemblance, due to which differentiation of these entities is essential for its management and prognosis. The absence of features of CRAB (increased Calcium, Renal insufficiency, Anemia, or multiple Bone lesions) aids in differentiating myeloma from SBP and EMP [2]. When a plasmacytoma is found along with MM, the patient should be treated for MM [2].

Both SPB and EMP shows male predilection with M: F ratio of 2:1 and 3:1 respectively [3, 4]. The median age is 55 years [2-4]. SPB affects the axial skeleton especially the vertebrae and EMP affects the head and neck, mainly nasal cavity and nasopharynx [2, 3]. The median overall survival in different series varies from 7.5 to 12 years [2, 4, 5]. SBP have poor prognosis then EMP [2-4]. Diagnosis of SPB and EMP is made when the recommended criteria of multiple myeloma are absent. The presence of only a single bone lesion, normal bone marrow aspirate (<5% plasma cells), absent or low monoclonal immunoglobulin in serum or urine (level of >20 g/l suspicious of MM), no evidence of organ damage (anemia, hypercalcaemia or renal impairment) and a normal skeletal survey (other than the single bone lesion) confirms SPB [2-4] (Figure 12 and 13).

The most frequent sites for plasmacytoma of skull include sphenoid bone, juxtasellar region, petrous apex, cerebral convexity [6]. These locations are similar to the sites as for meningioma. In our first case, the pre-operative diagnosis was Meningioma. The postoperative histopathology report confirmed plasmacytoma. Although the negative results for serum M-protein, Bence-Jones protein and bone marrow biopsy ruled out Multiple Myeloma. It is crucial to investigate for systemic involvement for at least a year, as the solitary plasmacytoma may advance to MM later, despite negative initial presentation [2, 4]. Within a median duration of 2-4 years, more than 75% patients with apparent SBP advance to myeloma [2]. The predicted factors for development to myeloma includes tumor size >5 cm, old age ? 60 years, high M protein levels, radiotherapy dose,persistence of M protein after treatment and spine lesions [4, 5]. However, these features are considered inconsistent and recently, the only adverse prognostic factor is concluded to be “M protein for more than 1 year after radiotherapy” [4].
Our second case was initially diagnosed as malignant meningioma. The biopsy showed plasmacytoma but MM couldn’t be ruled out as the patient didn’t follow-up with his reports. However, his SPECT-CT showed multiple lesions in his ribs confirming metastasis. The detection of multiple bony lesions (at least two hypermetabolic lesions on PET/CT) or positivity on FDG-PET scan predicts the progression of SBP to MM [2, 7]. Compared to EMP, SBP is known to have poor prognosis and higher risk of advancement to MM [2].

The imaging characteristics of SBP have also not yet been illustrated in detail. Its imaging findings are important for reducing the likelihood of misdiagnosis and for evaluating local disease and for staging. Grammatico et al, in their review article suggested that on T1-weighted images, the signal intensity is similar to muscle and on T2-weighted images, it appears hyperintense to muscle [3].

Similarly, another review article by Chargari et al. suggested hypointensity on T1-weighted images, and hyperintensity on T2-weighted images with marked homogeneous contrast enhancement [6]. However, in both our case reports, the lesion appeared isointense to the brain parenchyma in both T1WI and T2WI without any necrotic and hemorrhagic features. Several case reports published on intracranial SBP have demonstrated isointensity on both T1 and T2 weighted images with significant post-contrast enhancement [8-14]. They also demonstrated locally aggressive features like involvement and destruction of adjacent structures. Most of CT reports demonstrated hyperdensity with homogenous enhancement [7, 15-17]. These reports are in compliance with our cases.

CT displays bone destruction and lytic lesions compared to MRI. MRI is a better for evaluation of soft tissue, suspected cord or nerve root compression. DWI of solitary plasmacytoma has not been reported previously in the literature. In our first case, DWI showed no restricted diffusion. FDG-PET is the modality of choice for assessment of the skeletal abnormalities [3, 15, 18, 19].

The differential diagnosis for plasmacytoma mainly includes meningioma, metastasis, sarcoma, chordoma, eosinophilic granuloma, osteosarcoma and giant cell tumour [8, 11, 20]. Meningioma usually shows iso to hyperdensity with homogenous enhancement and a “dura tail”. However, unlike plasmacytomas, meningiomas rarely cause lytic bony destruction. The involvement of dura in plasmacytoma, however, may show “dural tail” sign after contrast, but this sign remains non-specific. Osteolytic metastatic carcinoma is the commonest type of bone metastases and are usually multiple with ill defined margin, lobular appearance and surrounding edema. A metastatic lesion demonstrates heterogenous signal due to necrosis and hemorrhage and DWI shows restricted diffusion. Our first case of SBP didn’t show any restricted diffusion in DWI. The primary differential remains meningioma or metastasis.

5. Conclusion
The imaging features of SBP remains non-specific. More studies are required to confirm its radiological findings which can prevent misdiagnosis and invasive procedures. Hence, the recommended criterion for diagnosing and differentiating SBP, EMP and MM needs to be confirmed before the final diagnosis is made. Similarly, follow up at 6 weeks interval for first 6 months to measure M-protein must be performed to avoid systemic MM [21, 22]. Imaging and skeletal survey can be performed if any new bone pain or bony lesions are suspected [22].