Mosquitoes and Malaria: A Centuries Old Saga of Friendship through Thick and Thin

Malaria is an ancient disease prevalent in many parts of the world. It is transmitted through the bite of female Anopheles mosquitoes. Malarial outburst is a public health problem with significant morbidity and mortality in endemic areas. Despite its ancient origin, historical importance and global presence, we are unable to curb the spread of disease. Management of malaria requires an interdisciplinary holistic approach interlinking the life cycle of the plasmodium, mosquito and other possible host. These intricate complexities of malaria and mosquitoes will yield the vital clue to understand the role of vectors to have an insight into its biological niche and come up with an effective control plan.

Malaria is a leading cause of morbidity and mortality accounting for an estimated 200 million cases and 400,000 deaths each year [1]. The global presence of malaria is attributed to the increased human mobility and migration pattern. It is the most widely known mosquito borne infectious diseases in the history of mankind. While malaria is accepted as an ancient disease with records dating 2700 BC, its origins are not fully understood [2]. Female Anopheles mosquitoes are responsible for carrying this infection in many developing countries. This genus is specific for the mosquitoes that can actually function as vectors. The malarial vectors vary in species depending on the geographical locations.
Malaria is caused by the unicellular protozoa Plasmodium: P. falciparum, P. malariae, P. ovale and P. vivax [3]. The majority of the cases in the sub-Saharan Africa are associated with P. falciparum (cerebral malaria), while it is only associated with less than 50% of the cases in the eastern Afghanistan [4]. The two possible hosts are either mosquitoes (invertebrates) and/or humans (vertebrates). Mosquitoes are the definitive host as the sexual cycle occurs inside them [5].

Mosquitoes are concentrated predominantly in the tropical countries at a warm and humid environment. Dispersion of vectors is the important first step in determining global impact of malaria. Climate plays a significant role in the mosquito’s life cycle. Favorable temperature helps mosquitoes to survive and reproduce much more successfully. Furthermore, socioeconomic factors also portray a considerable impact. Most of the endemic regions not only have a greater diseased population, but also the limited availability of the medical treatment. This is getting worse with added emergence of new drug resistance strains.

It is necessary to understand transmission pattern of malaria to implement the effective prevention plan. Understanding the relationship between mosquitoes, malaria and noticeable trend from the rise and fall of the infection would lead to a better approach to vector borne diseases as a whole. The biological knowledge of mosquitoes and their function will be important in terms of dealing with malarial transmission and even prevention. This information will be useful in understanding the role of vectors and their interactions.

While malaria has been present for the centuries, the exact mechanism of transmission was not understood until the late 1800s. Laveran Mason (a British physician) and Ronald Ross were the first to establish a linkage between malaria and mosquitoes [6]. Ross conducted experiments on birds infected with avian malaria concluding mosquito’s role in the transmission of malaria. With no clear understanding of the nature of malaria, there were many mysteries that were unfolded with subsequent generations.

2.1 Demographics of vectors
Female Anopheles (An) mosquitoes are the primary source of global malaria burden. It is essential to understand the regional differences in the prevalence of mosquito species. An. gambiae, An. arabiensis, An. funestus, An. pharoensis and An. coustani are responsible for the transmission of Plasmodium falciparum in the sub-Saharan region [7]. Other species are typically restricted to areas that are not as geographically diverse. This is supported by the fact that An. melas can only survive in the coastal areas. As such, climate and geography plays a huge role in the distribution and growth of malaria [4]. Warmer climates facilitate earlier maturation to adulthood.

2.2 Life cycle of Mosquito
The four stages of a mosquito’s life cycle are the eggs, larva, pupae and adult (Figure 1). The first stage is characterized by the floating eggs which are typically laid in still waters either individually or in a raft with several eggs. The egg darkens with time and hatch within around 48 hours depending on the temperature and humidity. They are now known as larvae. Larvae typically spend their time inverted, hanging from the surface of the water to ensure the access to oxygen. They consume their food by the brushes located at their mouth, feeding on bacteria and decaying material. Depending on the temperature of the water, the larvae molt and become pupae in a few days to weeks. Pupae are light and aquatic which float on the water surface. This stage of the mosquito is marked by metamorphosis and subsequent dormancy. Based on the temperature of the water, in a day or longer, they complete their metamorphosis and are transformed into an adult [8]. The adult mosquito begins drying its wings to take the first flight. Within the first few days of adulthood, they start mating and the females will become pregnant.

These pregnant mosquitoes require protein to nourish the eggs, seeking the blood of humans and other animals (depending on the mosquito species). The mixture of lactic acid in sweat attracts the pregnant Anopheles even up to 100 meters away. When stabbing the host, they use their proboscis and puncture the skin. It is a tubular appendage that sticks out from the mosquito, which is used to suck in the blood. The two tubes that are a part of it have dual functions [9]. First ejects the saliva of the mosquito working as an anticoagulant and painkiller, while the second sucks in the blood. This mosquito bite will causes the injection of malaria into the host eventually leading to the spread of the infection. 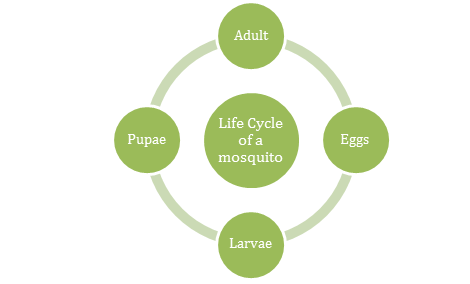 Mosquitoes are the main vectors for many diseases. A vector is an intermediate host in a transmission cycle. The life cycle of malaria begins with an arthropod host (the mosquito itself) initiating the horizontal transmission into the final host (humans). The mosquitoes may become infected either horizontally or other means passing it down to the offspring. They will feed on subsequent hosts and inject its saliva causing the disease [10]. Mosquitoes that feed on the infected hosts will continue this cycle of transmission. The passing of the disease through lineage is considered to be vertical transmission. One form of it is trans-ovarian, which occurs when the pathogens multiply in the epithelial cells of the ovaries. Mosquito also utilize mixed-mode transmission [11]. In this instance, both vertical and horizontal modes are utilized to ensure the transmission of infection from one mosquito to another.

2.3 Spread of Infection
The spread of malaria begins with mosquito through the injection of sporocytes into the human host (Figure 2). The sporocytes undergo repetitive asexual multiplication in the red blood cells (RBC) and then exoerythrocytic schizogony in the liver hepatocytes. The initial asexual multiplication results in merozoites, initiating the next phase of infection. When the merozoites fully circulate the host, some of the merozoites develop into gametophytes.

After a mosquito feeds on this infected host, the gametocytes become either female or male gametes in the mosquito. This is followed by the fertilization between the gametes, forming zygotes, leading to ookinetes. The ookinetes mature into oocytes that release sporocytes in the hemolymph. The sporocytes will then travel through the mosquito and become a part of its saliva. The saliva will than be injected into the next host, and the cycle continues [12]. 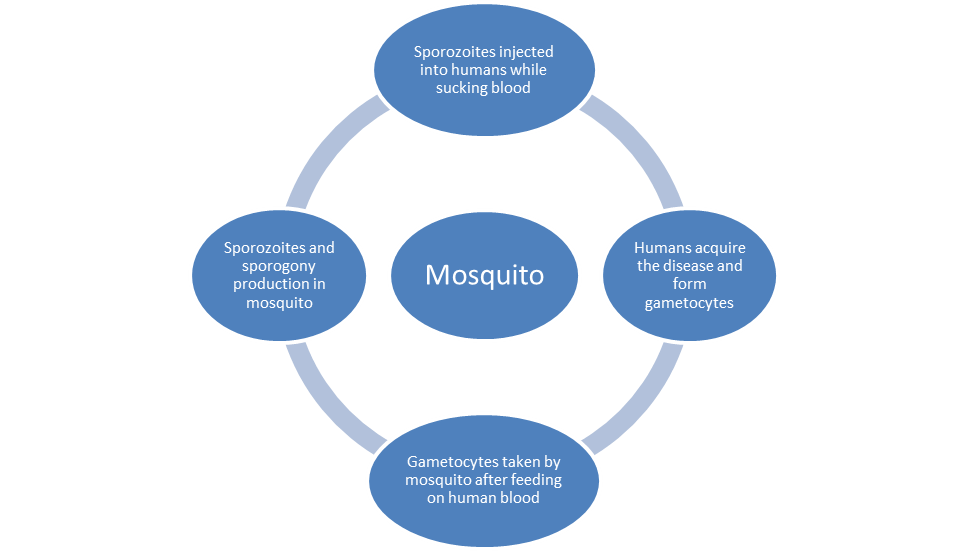 Figure 2: The intricate relationship between the different phases of the life cycle of plasmodium in the intermediate (mosquito) and the definitive (human) host showing the central role of vectors.

2.4 Control of vectors
The inhibition of mosquitoes and malarial infection depends on the geographic location, the climate (impacting life cycle), and community management. Direct prevention of the infection is usually not possible; thereby, isolating transfer of infection from mosquito to human is the only possible break. Prevention of mosquito bites can be maintained with Environment Protection Agency (EPA)-registered insect repellents, like DEET (N, N-diethyl-meta-toluamide) [5]. Alternatives include insecticides and mosquito repellants in the form of a lotion. Insecticides are non-selective and are more disruptive ecologically. Spinosad is a relatively newer selective insecticide with promising results [13]. Despite variety of the available options, the only effective preventative measure at present is to stay indoors or use nets.

Biological control of mosquito can be a natural alternative for vector management. The most vulnerable time of a mosquito is its egg and larval stage in still waters. The classic predator of the larva is Gambusia (western mosquitofish) Gambusia affinis and eastern mosquitofish: Gambusia holbrooki, a fish that is well known for its self-sufficiency and successful survival. Nile tilapia (Oreochromis niloticus) is a more effective predator [14]. However, they are only able to survive in specific conditions making them, not a preferred choice.

Many preventative strategies have been tested for their efficacy. Educational programs with pertinent information have been provided in many endemic areas but the mosquito population and the contraction of malaria have not change significantly [15]. Educating the community while also implementing an effective action plan will have an added benefit [16]. Collective effort of communities and all the stake holders will have the maximal output. It is a shared goal of individuals and communities to keep still waters to a minimum. When the community’s efforts were combined with the use of vectors control like insecticides, the result was promising with greatest decrease in malarial cases. The practicality and low cost of this strategy make it a promising preventative plan.

Mosquitoes are the potential vectors for many public health diseases including malaria, dengue, encephalitis, etc. They should be considered a vector rather than just host because P. falciparum is spread to different individuals to complete its life cycle with the aid of mosquitoes. Despite carrying various pathogenic microorganisms like arboviruses and plasmodium, mosquitoes are able to continue functioning without impairment. The co-evolution of malaria and mosquitoes may have enabled them to survive with no detrimental effects even after the infection. Since malaria depends on the efficacy of mosquitoes and mosquitoes have carried the infection for more than several centuries, the infection and vector may have adapted to each other over successive generations of the mosquito.

There is an increasing trend of the global anti-malarial drug resistance which is a serious concern in many countries. With an increasing accessibility of medications, there are many reported incidences of drug resistances complicating the current situations. Chloroquine resistant P. falciparum was first noted in a few areas in the late 1950s, which was followed with resistance to sulfadoxine, mefloquine, halofantrine and quinine in many endemic areas [17]. These influxes of resistant strains have further credited the upward shift in morbidity and mortality.

Management of malaria requires a holistic approach interlinking the life cycle of the infectious agent, the mosquito, and the other possible host. The easiest way to control the spread is through the manipulation of vectors. Mosquito repellents that contain insecticides like DEET may help prevent bites, but natural predators that consume mosquitoes at their most vulnerable life stages are much more effective. Mosquitoes may become resistant to repellants; but the predators will remain the same. It is crucial to consider how the mosquitoes reach maturity and pick up infections throughout their lives. Therefore, we need to explore the intricate complexities of malaria and mosquitoes to gain an insight into the importance of the vectors in infection control and formulate an effective plan.

Malaria is a protozoan disease transmitted through the bite of mosquitoes. Mosquitoes have developed a form of defense against these pathogenic microorganisms leading to a significant morbidity and mortality in many parts of the word. It is imperative to understand the different life cycle stages of potential vectors; to unfold the relationships between infectious organism, its vectors and the host. This will provide us with opportunities to have an insight into its biological niche and formulate an effective control plan.

Conflict of Interest
None