Portal Vein Thrombosis as Revealed by a Post- Appendicectomy Abscess. About a Case

Acute appendicitis and diverticulitis of the colon are the most frequently identified surgical causes of portal vein thrombosis. Germs cause septic thrombosis when they come into contact with the venous endothelium, which can extend to the portal vein resulting in a pylephlebitis. An abdominal CT scan allows for early diagnosis and identification of the responsible septic source. Treatment should include a combination of antibiotics and anticoagulants. Surgical treatment of the responsible infectious site should be carried out without delay. Morbidity and mortality rates decrease if early diagnosis is made and treatment instituted immediately. We report a new clinical case of portal vein thrombosis in a 60-year-old patient who presented with an abscess of the right iliac fossa following an appendicectomy.

Septic pylephlebitis is a purulent thrombosis of the portal vein, affecting either one of its intrahepatic branches or one of its affluents (splenic vein, superior mesenteric vein or inferior mesenteric vein) and is responsible for septicemia. In most cases, this is associated with an intra-abdominal infection situated in the territory drained by the portal system [1]. Imaging techniques such as Doppler echography, computed tomography (CT), or magnetic resonance imaging (MRI) can easily diagnose pyelphlebitis by objectifying the thrombus in the portal-mesenteric system in a patient with an acute abdomen [2]. The most frequent etiologies are acute ascending disorders of an intra-abdominal organ such as pancreaticnecrosis, appendicitis, acute cholecystitis, acute or perforated diverticulitis. Our aim is to emphasize, using this new clinical case, the modalities of management of this pathology as reviewed in medical literature.

A 62-year-old patient with a medical history of hepatitis B was admitted to the emergency for an appendicular syndrome for which he underwent an appendicectomy. The patient was re-hospitalized after 10 days for fever at 39°C accompanied by diarrhea, which was resistant to the usual medical treatment. Clinical examination found a patient with normal vitals but with fever at 39.5°C and, sensitivity of the right iliac fossa and right hypochondrium on palpation. Blood tests revealed an inflammatory syndrome with C-reactiveprotein (CRP) at 270 mg / l and hyperleukocytosis at 12800 /mm with 89% neutrophils. Liver function tests showed raised AST at 122 IU /l, raised ALT at 109 IU / L associated with moderate hepatic cholestas is with ALP at 193UI / l, gammaGTat340 IU / L and total bilirubinat19 mg / L. Renal function was conserved. Abdominal CT with injection of contrast agent shows an incomplete thrombosis of the port [figure 1] a with an abscess opposite the site of the appendicectomy[figure 2]. 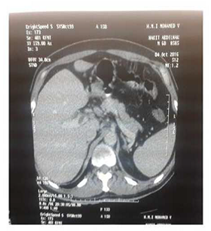 Figure 1: Axial contrast-enhanced computed tomography scans of the abdomen show an incomplete thrombosis of the port. 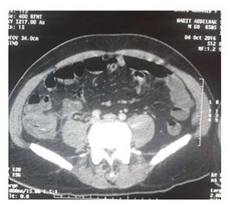 Figure 2: Abdominal CT with injection of contrast agent shows an abscess opposite the site of the appendicectomy.

Blood cultures were negative. The diagnosis of pylephlebitis was retained and treatment was started immediately with the combination of an empiric antibiotic therapy based on ceftriaxone, metronidazole, gentamycin (given intravenously) and curative heparin therapy relayed five days later by warfarin. Evolution was favorable with apyrexia, regression of clinical signs, and on radiological controls showed repeatability of the portal vein.

The first case of pylephlebitis was described in 1841 by Lambron. Subsequently, Walter in 1846 and Dieulafoy in 1898 described several cases of pylephlebitis associated with hepatic abscesses in patients with appendicitis [3]. The actual prevalence of pylephlebitis remains difficult to establish, In the Thrombocir study Portal thrombosis has a not inconsiderable incidence and does not appear either as an independent factor of aggravation of liver disease or as a consequence Of the aggravation of the latter [4]. In most cases, pylephlebitis is the consequence of the gradual extension of suppurative thrombophlebitis secondary to an intra-abdominal infectious site such as an appendicitis, a diverticulitis or a biliary infection. Pylephlebitis is rarely the consequence of direct microbial inoculation of a venous trunk of the portomesenteric system [1,5]. In some cases, the primary suppuration site is not found. This could be micro-abscesses contiguous to the digestive tract which are very difficult to spot [6].

Clinically, the patient may be asymptomatic or may present an acute abdomen. Manifestations of thrombosis include fever, pain in the right hypochondrium secondary to hepatic involvement [7]. These two symptoms were present in our patient. Nausea and diarrhea as well as jaundice occur in 20% of cases. In almost 20% of cases, pylephlebitis is revealed by severe sepsis [8]. Blood tests generally show moderate to severe inflammatory syndrome [9]. Rapid diagnosis of pylephlebitisis essential because morbidity and mortality rates decrease dramatically with appropriate treatment [10]. However, nonspecific clinical signs maybe present resulting in delayed diagnosis and management. Physicians should consider pylephlebitis as a differential diagnosis in patients with fever, signs of surgical abdomen (such as diverticulitis and appendicitis), and disruption of liver function.

Blood cultures must be obtained in any patient with acute vein thrombosis associated with fever, hyperleukocytosis and hepatic enzyme elevation [11]. Blood cultures are positive in 50% to 88% of cases. Escherichia coli and streptococcus are the most common germs found. The thrombogenic role of some anaerobic germs has been described in the literature such as Bacteroides Fragilis, a strictly anaerobic Gram-negative bacillus (GNB); In animals, it is involved in the production of hemagglutinin and the induction of platelet aggregation [3, 6, 12].

Imaging plays an essential role in the diagnosis of pylephlebitis and its etiology. Ultrasound may show portal vein thrombosis and signs of the primary abdominal inflammatory process, but it accuracy is limited by the gaseous screen and the quality of the ultrasound examination, which vary according to the experience of the examiner [13]. CT scan is useful for diagnosis because it easily represents thrombosis as a lack in contrast agent uptake. Rarely does it show air bubbles in the portal system. Pylephlebitis should be treated rapidly and aggressively to avoid complications such as visceral ischemia, hepatic abscesses, and chronic portal hypertension [14]. Broad spectrum antibiotics and anticoagulants are the therapeutic pillars in the management of this disease. Anticoagulation is traditionally reserved for cases of pylephlebitis complicated by the thrombosis of the mesenteric vein and the progression of the thrombus [8]. The duration of anticoagulation is not clearly defined, and thus it must be continued for at least three months or even for a lifetime in case of associated thrombophilia [15]. Kanellopoulou et al. Reported that patients who received both biantibiotics and anticoagulants had a better outcome than those who received only antibiotics [16]. Surgical treatment is rarely necessary except in cases of hepatic abscess with no clinical and biological improvements under medical treatment or in forms complicated with peritonitis. Antibiotherapy must be adapted according to the antibiogram and continued for four to six weeks according to the evolution [8]. Left untreated, thrombotic disease could lead to cavernous transformation and portal hypertension [10], the Biliary symptoms due to portal cholangiopathy sometimes reveal the portal cavernoma [17]. Mortality in patients with pylephlebitis is more likely to be caused by severe septicaemia related to intra-abdominal infection rather than thrombosis [15].