The quality of vegetables can be assessed by numbers of viewpoints. One of them is the monitoring of the content of hazardous substances included nitrates. High nitrate levels cause methemoglobinemia or blue baby syndrome; a condition found especially including in infants under six months. Most of the nitrates we consume are from either raw or cooked vegetables. Healthy adults may consume fairly large amount of nitrates with few known negative health effects. However, a long-term intake of high amount of nitrates may result into various gastric problems because of the rapid reduction of nitrates to nitrites. Subsequently, the nitrites react with further secondary amines in the stomach which leads to a production of carcinogenic nitrosamines. This work deals with determination of nitrates in vegetables by capillary isotachophoresis. Samples of organic-labeled (“bio”) vegetables as well as undistinguished vegetables were purchased in supermarkets and in farmer markets in Brno, Czech Republic. The amount of nitrates contained in the samples differed widely. The lowest content of nitrates was found bellow the limit of quantification. On the other hand only one of the samples exceeded the maximum amount of nitrates allowed by European Union legislation.

1. Introduction
Vegetables, by definition [1-3] the edible parts of crop plants, are used in gastronomy and as a spice and in phytotherapy as a medicinal herb. Vegetables play the significant role in human nutrition because they are an irreplaceable source of vitamins, minerals, fibers and other nutrients. Sufficient daily consumption of either raw or cooked vegetables may aid in prevention of chronic diseases, including cardiovascular diseases, cancers, obesity, osteophoresis and diabetes [4]. It is recommended to consume vegetables and/or fruit at least 5 times per day [5]. Nitrates are an essential component of the bio-environment and participate in the nitrogen cycle found throughout the living nature. Nitrates are reduced to ammonium salts in plants thus enabling the assimilation and production of the amino acids and then proteins. For this reason, fertilizers containing nitrogen are widely used to boost the plant grow speed. However, nitrates tend to be accumulated in plants exposed to unfriendly habitat. Because of the poor conditions the plants may not have enough carbon compounds needed for assimilation of nitrates. Therefore the content of nitrates varies in different crops within a wide range, depending on both climatic and soil conditions during vegetation. Among the main factors affecting the content of nitrates are kind and variety of plan; light and temperature conditions; amount of moisture and fertilization applied. Additionally the time of harvesting, stocking and last but not least kitchen processing plays its role [6-11]. Amount of nitrates occurring in vegetables may range from 1 to 10 000 mg.kg-1 [12]. The vegetables are classified into 5 groups by the ability to accumulate nitrates [13], see Table 1.

Table 1: Classification of vegetables according to content of nitrates.

1.1 Health aspects
Nitrates are the compounds of low toxicity and are not dangerous themselves for adults at levels commonly present in ordinary food. Furthermore they tend to be relatively rapidly excreted in the urine or saliva. The acceptable daily intake (ADI) is 3.5 mg of nitrates per 1 kg of body weight per day. Nevertheless, abundance of nitrates is undesirable in foodstuffs because of rapid reduction of part of nitrates to nitrites by nitrate reducing bacteria in the gastro-intestinal tract. This process may cause foodborne nitrate methemoglobinemia (blue baby syndrome) disease, occurring most in babies fed by artificial nutrition, having 8-10% mortality. The nitrites react with hemoglobin production methemoglobin, which does not have the ability to carry oxygen. In addition, the baby’s blood contains also so-called fetal hemoglobin (hemoglobin F) which is more readily converted to methemoglobin than adult hemoglobin (hemoglobin A). Also, the oxidation-reduction enzyme system catalyzing the back reduction to hemoglobin is in infants less active. The natural level of methemoglobin in the blood does not exceed 1% of the total hemoglobin. When increasing its content, the clinical form of the disease is manifested by cyanosis and tachycardia. Methemoglobin content above 50% may be lethal [13-16]. Therefore, the maximum permissible concentration of nitrates in drinking water is governed legislatively, for example in [17, 18] and it is 15 mg.L-1 for babies and 50 mg.L-1 for adults according to Czech Regulation 252/2004 Coll [18]. Another negative attribute of nitrates is their indirect toxicity after reduction on nitrites which react with amines at stomach acid catalyzed nitrosation. This leads to production of N-nitrosamines, which have been found carcinogenous and have been associated with increased risks of cancer of the stomach, oesophagus and bladder [13, 19]. This study is focused on the determination and evaluation of amount of nitrates in different kinds of vegetables.

2. Material and Method
2.1 Method
Nitrates in the different types of the samples can be determined by several analytical methods, namely by spectrophotometry, potentiometry, polarography, chromatography or capillary isotachophoresis [20-24]. Capillary isotachophoresis (cITP) is a nonlinear electrophoretic technique used for selective separation and concentration of ionic analytes. Conventional ITP separations are characteristic by putting the samples between a zone of "fast" leading electrolyte (LE) and a zone of "slow" terminating electrolyte (TE). The analytes of interest have intermediate ionic mobility. After application of a fixed electric current, sample components move forward behind the leading ion and in front of the terminating ion and form discrete adjacent zones according to their electrophoretic mobilities. A completed ITP separation is characterized by a dynamic equilibrium in which all coionic zones migrate at equal velocities. The analytes are identified using the relative step height (RSH) parameter and quantified by the length of the appropriate steps [25, 26].

2.2 Apparatus
Isotachophoretic analyses were performed using Villa Labeco EA 100 analyzer equipped with a conductivity detector (Villa-LABECO, Slovak Republic). The isotachopherograms were evaluated using the PC software supplied with the analyzer. The samples of 30 µL volume were injected by internal sample loop through a sample valve. Leading electrolyte made up of 10 mmol.L-1 hydrochloric acid (p.a., Penta, Czech Republic), 5.5 mmol.L-1 1,3-bis[tris(hydroxymethyl)methyl-amino]propane (>99%, Fluka) and 0.1% hydroxypropylmethylcelulosa (n.a., Aldrich) was used for determination of nitrates. Three terminating electrolytes were tested in electrolyte systems; namely ammonium formate, oxalic acid and citric acid (all p.a., Penta, Czech Republic). All the three systems had good criteria for separation. However, the best response was obtained from the system with above mentioned leading electrolyte and citric acid as terminating electrolyte. Analyses were carried out in a capillary with 0.8 mm thick and 16 mm long, with conductometric detection. The current of 250 µA was set for 400 seconds in the first step of the analyses. Then 80 µA was used until the end of the analyses. The calibration solutions and the samples were analyzed with the above mentioned electrolytes system under these conditions. Calibration curve was built in the range 20-150 mg NO3-.L-l (KNO3, p.a., Penta, Czech Republic) using six calibrations standards. Calibration points were set by measuring the zone length versus standard concentration. The limit of detection (LOD) for determination of nitrates was 18 mg.kg-l and the limit of quantification (LOQ) was 60 mg.kg-l.

2.3 Vegetable samples
Samples of vegetables including those stated as organic-labeled or “bio-quality” as well as undistinguished were bought in supermarkets and in farmer markets in March 2016 in Brno, the second largest town in Czech Republic, Central Europe (see Figure 1). The following kinds of vegetables were analyzed: beetroot, cabbage lettuce, carrots, cauliflower, celery, iceberg lettuce, kohlrabi, parsley, potato, radishes and white radish. Vegetables were peeled and finely grated. Distilled water was added in order to dilute the vegetables samples ten times. Samples of bio-vegetables were diluted only twice because of probable lower nitrates content. The samples were extracted for 5 minutes in ultrasonic bath TESLA Teson 4 (Tesla, Czech Republic). Finally, the solutions were filtered and thus got off pieces of vegetables. The obtained solutions were analyzed. 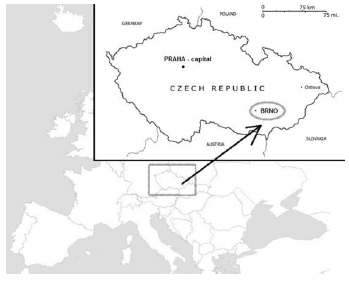 3. Results and Discussion
Nitrates in various kinds of vegetables were determined by capillary isotachophoresis. The process took approximately 20 minutes. Also, sample preparation prior to analysis took a few minutes. All the samples of vegetables were analyzed and the content of nitrates found in them varied widely from the values bellow limit of quantification (60 mg.kg-1) up to above 7000 mg.kg-1. The results are summarized in the Table 2.

Table 2: The content of nitrates in analyzed vegetables, mg.kg-1.

The contents of nitrates bellow limit of quantification were found in five different kinds of vegetables in bio-quality and from supermarkets. These crop-plants were “bio” kohlrabi, “bio” radishes and cauliflower, celery and iceberg lettuce from supermarkets. Those vegetables contained lower nitrates content than it was indicated by P. Santamaria [13]. The highest content, particularly 7337 mg.kg-1 of nitrates, was determined in cabbage lettuce bought on the farmer market. The Regulation of the European Commission sets the maximum levels for nitrates only for spinach and various kinds of lettuces with regard to the time of harvest [27]. The limits values for other kinds of vegetables are usually set by national Regulations of Ministries of Health [28-30]. The content of 7337 mg.kg-1 exceeded the maximum level specified in EU Regulations that is 4500 mg.kg-1 for lettuce harvested from 1 October to 31 March and grown under cover. On this sample of lettuce, small white speckles were visible and could indicate strong fertilization of early forcing and early-ripening lettuce. This cabbage lettuce failed to comply with legislative requirements and should not have been sold. The comparison of the content of nitrates determined in the samples of carrots brings also interesting findings. Carrot is included in set of vegetables that is characterized by low-accumulation of nitrate, generally 200-500 mg.kg-1 [13]. However, the contents obtained in two samples bought in supermarket were much higher; particularly 1261 mg.kg-1 and 2952 mg.kg-1. These samples came from abroad and failed to comply with the national Regulation which specifies permissible amount 700 mg.kg-1for root vegetables [28]. These carrots could cause health problems, especially when served to babies. The samples of carrot in bio-quality contained 215 mg.kg-1of nitrates and obeyed Regulation. Similar findings can be observed for the samples of parsley, too. However, in this case the measured values do not vary as much as in the samples of carrot. The amount of nitrates in the analyzed samples of roof vegetables is shown in Figure 2.

In contrast, cauliflower, celery and iceberg lettuce purchased at supermarkets contained the amounts of nitrates lower than limit of quantification and corresponding bio-vegetables. Various kinds of vegetables purchased in supermarkets had completely different quality with respect to content of nitrates. Generally speaking, it was found out that the amount of nitrates in vegetables in bio-quality is lower compared to common vegetables, which is analogous to Gonzalez et al. and Ilic et al. [31, 32]. Such vegetables may be recommended for home food preparation for babies. However, the quality of vegetables from farmer markets was not too good. Nitrates were present generally in higher levels compared with the other samples. This fact may be affected by the season of buying the samples when farmers want to harvest in short time and therefore the vegetables are probably too fertilized. 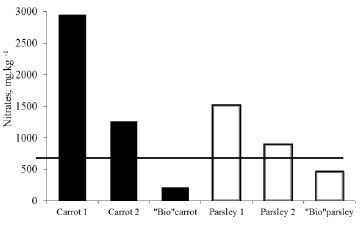 Figure 2: The content of nitrates in roof vegetables, mg.kg-1.

4. Conclusion
It was found out that the amount of nitrates contained in the samples of vegetables differed widely. The lowest content of nitrates was found bellow the limit of quantification. One of the samples-cabbage lettuce-exceeded the maximum level of nitrates allowed by EU legislation. Should the vegetables be used for home preparation of baby food, it is advisable to use vegetables in bio-quality, where amounts of nitrates were found generally lower.

Conflict of Interest
None

Acknowledgments
This study was supported by the Grant No. FCH-S-18-5331 from the Ministry of Education, Youth and Sports of the Czech Republic.