Relapse of Multiple Myeloma in the Thyroid Gland

Citation: Lopez Rojo I, Gomez Valdazo A, Gomez Ramirez J. Relapse of Multiple Myeloma in the Thyroid Gland. Journal of Surgery and Research 1 (2018): 63-68.

Multiple myeloma (MM) relapse following allotransplantation is rare, and when it does occur, it tends to be located in the bone marrow. Thyroid gland invasion by plasma cells is an uncommon finding in the literature. It is important to be aware that in some patients the disease manifests as apparent solitary extramedullary plasmocytoma, though further investigation reveals a plasma cell tumor in other sites We present a case of relapsed MM presenting as a rapidly growing thyroid mass.

Extramedullary plasmocytomas (EMP) represent 5% of plasma cell neoplasms and are those which arise in tissues other than bone marrow. Thyroid-gland involvement by plasma cell neoplasms is extremely rare in the literature, and when this disease does occur, it usually appears as a solitary extramedullary plasmocytoma (SEP) in the setting of longstanding Hashimoto’s disease [1]. Symptoms related to SEP include local compressive symptoms, rapid nodule involvement, and hoarseness, with most patients presenting monoclonal serum Ig [2].

A 58-year-old man with a 10-year history of IgG multiple myeloma (MM) reported to our outpatient clinic with complaints of cervical occupancy of two months’ duration with associated dysphonia and right vocal cord palsy with no dysphagia or dyspnea.
In the 11-year period before presenting to our department, the patient was first treated with VBMCP Chemotherapy (Vincristine,Melphalan, Cyclophosphamide, Prednisone). Afterwards, he was treated with autologous stem cell transplantation (conditioned with melphalan) twice, with partial response to it. He was on maintenance first with interferon, and with Thalidomide and bortezomib after bone marrow progression. Finally, he was treated with related donor allotransplantation conditioned with Melfalan and Fludarabina, without acute complications and achieving complete remission proved by immunofluorescence testing. Levels of kappa light chains were elevated during follow-up, with negative results on urine and plasma immunofluorescence testing.

An ultrasound scan of the neck showed a 5 cm × 2.3 cm mass located in the right lobe of the thyroid gland, with micro- and macrocalcifications, 1-cm lymph nodes located in I and II cervical regions, presumably indicating extrathyroid invasion (Figure 1). 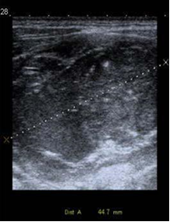 Due to the high suspicion of malignancy, a positron emission tomography (PET-CT) scan was performed, identifying a cervical mass (SUV 14.8) with destruction of the thyroid cartilage and a moth-eaten appearance of the axial skeleton, pelvis, shoulder, sternum, and D7-D11 vertebrae (Figures 2 and 3). 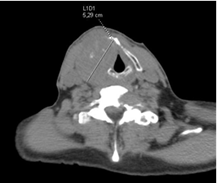 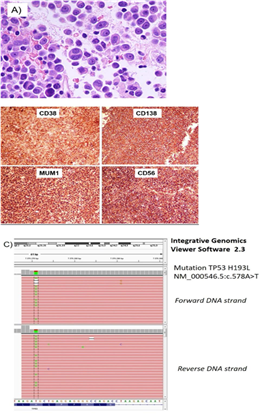 This finding suggests plasmacytic myeloma, proving inactivating mutations of the tumor suppressor gene p53 on Trusight panel (exon 6). Clinical findings were compatible with multiple myeloma relapse on bone and secundary thyroid gland plasmocytoma. As a result, the patient was treated with bortezomib and cyclophosphamide combined with radiation therapy to decrease the risk of spinal cord compression. He presented oral mucositis and repeated respiratory infection, forcing discontinuation of chemotherapy, though all planned radiation treatment sessions were performed. Eighteen months later, a follow-up test showed a reduction in the mass to 1.06 cm (SUVmax 3.9) and an improvement in lytic bone lesions, suggesting good response to treatment (Figures 5 and 6). 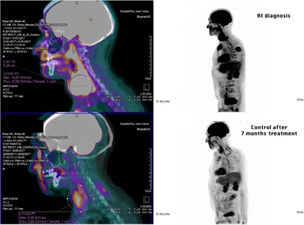 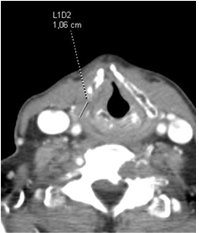 It is important to be aware that in some patients the disease manifests as apparent solitary extramedullary plasmocytoma, though further investigation reveals a plasma cell tumor in other sites. In other sites, as it occured in the presented case, where the PET-CT ruled out an exclusive affectation of the thyroid gland. Differential diagnosis of solitary extramedullary plasmocytoma of the thyroid should include rapidly enlarging masses such as inflammatory pseudotumor plasma cell variant (plasma cell granuloma), extranodal marginal zone B cell lymphoma, non-Hodgkin lymphoma, anaplastic and medullary thyroid cancer, and MM [3]. The main diagnostic challenge is to rule out systemic MM separation and distinguish this entity from SEP, given that one third of the patients with extramedullary plasmocytoma have underlying MM. In our case, the differential diagnosis was simpler when the patient had a diagnosis of MM. Solitary extramedullary plasmocytomas could achieve complete remission by radiation therapy alone but, when resectable, surgery remains the treatment of choice. Our patient had signs of local invasion, so the surgical option was discarded at least at the beginning. The gold standard diagnostic test for diagnosis of EMP is tissue biopsy [4].

Recurrence is a major cause of allogenic stem cell transplantation failure, the only potential curative treatment for MM. It is usually a bone relapse, but from time to time it presents as an isolated extramedullary plasmocytoma. In patients with extramedullary plasmocytomas, tumors develop either as direct extensions of bone tumors when they break cortical bone or as a nodular deposit of plasma cells, which develop autocrine supportive loops, allowing them to become stromal independent [5]. Late and localized relapse after transplantation could be explained by the persistence of foci of disease on immunologically privileged sites or by the selection of different subclones. Extramedullary relapse is more frequent after allogeneic transplantation rather than autologous stem cell transplantation in patients treated with novel drugs or with extramedullary disease at diagnosis. Isolated elevation of serum or urinary paraprotein could be a marker of this type of late relapse. When suspected, PET-CT scan is a valuable tool for diagnosis and follow-up.

Treatment options are limited for patients with localized relapse of MM after stem cell transplantation, and therefore, have worse prognosis. Immunotherapy and radiation therapy should be considered, and as an alternative option thalidomide and bortezomib could be chosen. Low-dose radiation therapy and surgery become an option when there is airway compression or vital organ involvement [6]. As mentioned before, the combination of bortezomib, immunotheraphy and radiation in the presented case, resulted in a good response in the 24-month follow-up. MM with extramedullary disease throughout the course of the illness indicate poor prognosis, and it is associated with shorter progression-free and overall survival [7].

Myeloma relapse is commonly preceded by a rise in blood or urine paraprotein levels. PET/CT scan is useful in these cases, allowing diagnosis and location of pauci-symptomatic or late relapse. Even though myeloma relapse manifesting as extramedullary plasmacytoma is rare, this entity should remain part of the differential diagnosis of neck masses when patient history includes myeloma, even in cases of complete remission. Additionally, plasma-cell proliferation on thyroid tissue should lead clinicians to rule out a plasma-cell tumor in other sites (specially bone marrow) and exclude the possibility of MM.

Our gratitude to Oliver Shaw, who helped us with the translation of the article.