The study was conducted by Fenton oxidation to efficiently remove contaminants from total petroleum hydrocarbon contaminated soil. IR spectrometry was used to determine the TPH level during soil treatments. In Fenton reaction, using hydrogen peroxide as the catalyst to produce hydroxyl radical could eliminate contaminant in a highly petroleum hydrocarbon contaminated soil. However, there is a need to use an appropriate quantity of reagent and pH (in the acidic medium) to obtain the most efficient in TPH removal in Fenton’s oxidation. In this study, Fenton reaction could remove TPH in soil contaminated approximately; 48% within 2hours with the optimal condition of H2O2: Fe2+ molar ratio of 104, Fenton’s reagent dosage of 50 ml, liquid/soil weight ratio of 15 and under a temperature of 25oC. This indicated that Fenton’s oxidation could be applied to clean up TPH contaminated soils within a short possible time.

1. Introduction
1.1 Description of TPHs contaminated soil
According to the U.S.A Environmental Protection Agency (USEPA), Total petroleum hydrocarbons (TPH) is a term used to describe hydrocarbon compounds derived from petroleum sources. In this regard, TPHs are a mixture of chemicals. They are called hydrocarbons because almost all of them are made up entirely from hydrogen and carbon. According to Regenesis Bioremediation Products, most products that contain TPH are light colored liquids that evaporate easily and others are thick, dark liquids or semi-solids that do not evaporate easily [1]. Many of these products have gasoline, kerosene, and oily odors. Because modern society uses so many petroleum based products such as gasoline, kerosene, mineral oil, and asphalt, contamination of the environment by them are widely spread. Contaminations caused by these petroleum products contain a variety of hydrocarbons [1]. TPH released into the soil may move through the soil to the underground water and be trapped as vapor within the soil in the unsaturated zone. Due to adverse health effects, soil contamination with petroleum products create widespread environmental problems and it is becoming difficult to assess contamination in some sites to remediate and monitor these cleaning processes and evaluate final quality of the soil. TPH is an important group of environmental contaminants that are toxic to human and environmental receptors and can cause safety hazards, ecological harm and human health effects. Chemical oxidation remediation methods are one of the most effective and competitive technologies for the treatment of contaminated soils.

1.2 Methods of remediating oil contaminated soil
Remediation consists of actions on the soil aimed at the removal, control, containment or reduction of contaminants so that the contaminated site, taking account of its current use and approved future use, no longer poses any significant risk to human health or the environment. Enormous effort has been made to find efficient and effective ways to remediate petroleum contamination in soil, since increased attention has been paid for developing innovative technology for cleaning up these contaminants [2]. The conventional methods used in remediating petroleum hydrocarbons contaminated soil are broadly divided into physical, chemical and biological methods [2, 3] but the most common conventional method for the remediating of contaminated soil is excavation followed by land filling or incineration [4], due to limitations and drawbacks of these methods thus causing secondary pollution that might pose a long treat to the environment. Common Exposure Pathways at Petroleum-Contaminated Sites is explained in Table 1.

Table 1: Common Exposure Pathways at Petroleum-Contaminated Sites.
Technologies such as bioremediation, soil vapor extraction, soil washing, thermal treatment and chemical oxidation have been developed [2, 3] for treating contaminated soil. Contaminants can be treated either by in-situ or ex-situ [5]. In-situ remediation requires treating the contaminated material in place while ex-situ involves the physical removal of the soil and contaminants from the polluted site to be treated elsewhere [6].

2. Experimental Study on Fenton’s Oxidation in Remediating TPHs Contaminated Soil
2.1 Introduction of Fenton’s oxidation
Chemical oxidation treatment using Fenton will be of its significant. The main research objective is to indicate whether Fenton’s oxidation technology can treat petroleum hydrocarbon contaminated soils within a short treatment period and how its influential factors can affect the remediation of TPH contaminated soil. It is of great significance to achieve the feasibility of using chemical method as efficient, cost effective and sustainable way to remediate petroleum hydrocarbon contaminated soils (PHCs) and treatment within a short limited time. The Fenton-like process generates hydroxyl radical, OH., when the catalyst reacts with hydrogen peroxide. The hydroxyl radical is a strong oxidant and has an oxidizing potential of 2.8eV that degrade a variety of environmental contaminants at fast rate. The principal chemical reaction of Fenton-like process is provided below

The initiation reaction described in equation 1 produces hydroxyl radical oxidants, the Fenton-like process produces superoxide radical (O2.-) and hydroperoxide anion (HO2-) reductants in Equ. 1 and Equ. 5 [7]. The perhydroxyl radical (HO2.) is known to be a weaker reductant as compared to superoxide radical (O2.-) and hydroperoxide           (HO2-) anions (as shown in table 2).

3. Materials and Methods
3.1 Soil description
The soil was contaminated by petroleum hydrocarbon and it presented grey and black in color and was collected at Shapingba District, Chongqing city. At the sampling site the brown sandy soil beneath 1.5 meters was also contaminated and had an awful smell. Initially the soil was air dried at room temperature for about 3days and sieved using the mesh of 2 mm to remove the large particles. Prepared samples were contaminated by diesel. Original concentration of TPH was 7017 ppm (Parts per million) HCl, NaOH, CCl4, Fe2+, H2O2 and deionized water were mostly used throughout the experiments.

3.2 Research plan
The experiment took 5 factors into consideration, thus reaction time, pH, and molar ratio of H2O2: Fe2++, water/Fenton ratio and liquid/soil values and the specific introduction will be described in the following.

3.3 Analytical methods
3.3.1 Determination of TPH: TPH determination was based on Soil determination of petroleum oil content by infrared spectrometry (Environmental protection standard for China OIL (8 (H.J 201). 5 g of soil was weighed in a beaker after drying. 20 ml of CCl4 (IR) was pipetted and added to the soil and placed in a reactor and oscillated for 30mins. It was then filtered with an aerator filtrator and the liquid was extracted. 5 g of magnesium metasilicate was added to each liquid in a 150 ml conical flask and oscillated for 30mins and filtered again into a 50 ml volumetric tube. Drop of CCl4 (IR) was added to reach its tick mark. It was shaken upwards and downwards to have an even mixture. The liquid sample was then poured into a seal and placed in an IR spectrometer to determine its TPH level. The formula below was used to calculate the efficiency of TPH removal and its influential factors where x1 is the initial content of TPH, x2 is the final content of TPH. (x1-x2)/x1=TPH removal.

3.3.2 Determination of pH: 10 g contaminated soil weighed and mixed with 100 ml of deionized water into a beaker and oscillated for 30 minutes, HCl and NaOH was then added to adjust the pH of the slurry. PH meter was used to measure the level of pH in the slurry.

3.3.3 Determination of aqueous Fe: A standard stock solution of iron was prepared and placed into a 150 ml conical flask and two glass pearls were added under heat to reduce the solution to 15 ml. It is then allowed to cool under room temperature and was transfer into a 50 ml tube. Saturated sodium acetate was added and a piece of Congo red litmus paper was placed into it and the paper turned red in color. Phenanthroline and deionized water was added to reach its peak mark. It was then placed into a 10 ml of cuvette to measure the absorbency of the solution using absorption spectroscopy under 510 nm and a standard curve was achieved.

4. Results and Discussion
The aim of the research was to use Fenton’s oxidation to determine the TPH removal efficiency in the contaminated soil. The contaminant removal in the soil analyzed was found to be dependent on the treatment time, dosage of Fenton, molar ratio of hydrogen peroxide to ferrous, pH and ratio of liquid to soil. The Figures below presents the effect of the parameters treatment on the removal of TPH in the contaminated soil analyzed. The TPH removal efficiency was measured using the IR spectrometer (OIL 8 (GB/T16488-1996)). 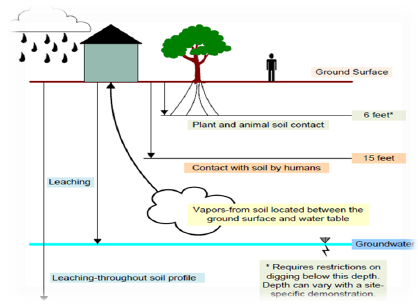 Figure 3A: Contaminated soil before treatment.

Figure 3B: Contaminated soil after treatment.

4.1 Effect of time on TPH removal efficiency
The experiment for the rate of removal was tested based on the optimum process conditions determined above pH is 7.5, molar ratio of H2O2: Fe2+ of 104, Fenton’s reagent dosage of 50 ml and liquid/solid ratio of 15 under a temperature of 25oC. It was found that the rate of TPH removal increased rapidly (after adding Fenton reagent and shaking the sample) from the initial time of 5mins to 10mins in the removal efficiency of TPH. There was increase in time until about 60min were the removal rate became steep and steady with gradual increase from 240mins to 480mins. TPH removal percentage was achieved within 2hours of reaction time. A steady state of OH concentration was attained as Fenton reaction started (Figure 5).

4.2 Effects of pH on TPH removal efficiency
This aspect was carried out based on the following conditions time of 120min, H2O2: Fe2+ molar ratio of 104, Fenton’s reagent dosage of 50 ml, and liquid/soil weight ratio of 15 and different pH of 3.3, 4.3, 5.1 and 6.1 respectively. The results of the pH test condition demonstrated that the most effective removal was at pH 3 with percentage removal of approximately 37%. From the Figure 6, the effect of pH seemed to be less effective in TPH removal at high pH. At higher pH the removal was quite high (pH of 3 to pH of 5) (Figure 6). With decreasing pH, the percentage TPH removal dropped linearly from 5 to 3. The reaction slowed down due to the formation of ferric-hydroxo complexes and the decomposition of H2O2. The Fenton’s reagent needs acid to produce .OH hydroxyl radicals. The result shows that ferrous iron could react with H2O2 efficiently under acidic conditions. Thus pH of 3 is the optimum for the TPH contaminated soil treated by Fenton oxidation.

Figure 7: Effect of the molar ratio of H2O2 to Fe2+ in Fenton reagent on TPH removal efficiency.

4.4 Effect of Fenton’s dosage on TPH removal efficiency
This aspects was based on pH (3.12), reaction time (120mins), molar ratio of H2O2: Fe2+ (330:1), and Fenton’s dosage adjustment at 75 ml, 50 ml, 37.5 ml and 30 ml. With respect to the dosage of hydrogen peroxide there was a change in the degradation of petroleum hydrocarbons. High dosage of H2O2 is a remarkable source for -OH production as shown in Figure 8. After a significant increase in removal efficiency, there was a steady change, thus after adding more volume of hydrogen peroxide. With increasing dosage of H2O2, there was an increased in the removal of TPH in the contaminated soil. While H2O2 dosage was further elevated; TPH removal did increase much significantly. Moreover, inorganic reactants can also consume H2O2. 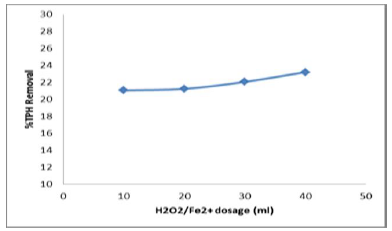 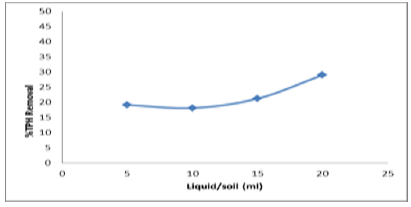 With the increase in liquid to soil ratio from 5 to 20, there was no significant effect on TPH removal efficiency. This reveals that soil washing with water only is not an effective treatment measure for the remediation of the contaminated soil. Because the soil contains contaminants that are strongly sorbed onto soil particles and cannot be washed away, thoroughly purely soil washing using water as the washing agent. Oxidant addition is a necessity to effectively remove and oxidize the adsorbed organic contaminants.

5. Conclusion
This study reported the capability of a Fenton reaction, using hydrogen peroxide catalyst to produce hydroxyl radical. From the study, Fenton reaction using hydrogen peroxide catalyst could eliminate contaminant in a highly petroleum hydrocarbon contaminated soil. However, there is a need to use an appropriate quantity of reagent and pH (in the acidic medium) to obtain the most efficiency in TPH removal in Fenton’s oxidation. At the optimum condition, Fenton reaction could remove TPH in soil contaminated approximately 48% within 2hours, pH of 3.12, molar ratio of hydrogen peroxide to ferrous ions of 330, water/Fenton ratio of 50 ml and liquid/soil of 15. This indicates that Fenton’s oxidation can be applied to clean up TPH contaminated soils within a short possible time.

Acknowledgement
I will like to thank Chongqing University for their great assistance and SER for allowing me to publish my paper successfully.