Resolution of Inferior Wall Ischemia after Successful Revascularization of LAD Lesion: The Value of Myocardial Perfusion Imaging in Guiding Management of Multi-vessel CAD

A 53-year-old male with history of hypertension and hyperlipidemia was presented with angina pectoris. Multi-slice CT coronary angiography showed severe stenosis in both left anterior descending coronary artery (LAD) and right coronary artery (RCA). Myocardial perfusion imaging (MPI) revealed extensive ischemia in apex, anterior, septal and inferior walls. Invasive coronary angiography revealed total occlusion in RCA and an 80% stenosis in LAD. Revascularization was performed for LAD first due to much severer ischemia than RCA on MPI. Follow-up MPI showed resolution of ischemia in both LAD and RCA territories, and the patient remained symptom-free during two years of follow-up.

Figure 2: For evaluating the physiological significance of these two coronary lesions on CTA, dipyridam1olestress rest Tl-201 myocardial perfusion imaging (MPI) was further arranged for him [2]. Figure 2 (A): The perfusion images revealed moderate to severe grade of extensive ischemia involving apex, anterior wall, septum and Cardiol Cardiovascmed 2017; 1 (1): 58-62 60 inferior wall [3]. The ischemic % myocardium was 30% and 10% for LAD and RCA territories, respectively [4, 5]. The transient ischemic dilation (TID) ratio was 1.76 [6].

Figures 2 (B and C): The functional analysis of MPI revealed that the early post-stress (B) and rest (C) ejection fraction of left ventricle were 51% and 83%, respectively [7]. Besides, severe hypokinesis in LAD territory was noted on the early post-stress wall motion analysis (B) but returned to normokinesis on rest (C), indicating of stressinduced stunning. All these findings were high-risk indicators of cardiac events; therefore, the patient was further referred for invasive coronary angiography [8].

Figure 3: Subsequent coronary angiography revealed: (A) chronic total occlusion (CTO) in proximal portion of RCA and (B) an 80% stenosis in proximal portion of LAD. Although severer stenosis was noted in RCA than LAD, Cardiol Cardiovascmed 2017; 1 (1): 58-62 61 percutaneous coronary intervention (PCI) was performed for the LAD lesion first because much severer ischemia was noted in LAD territory than in RCA. 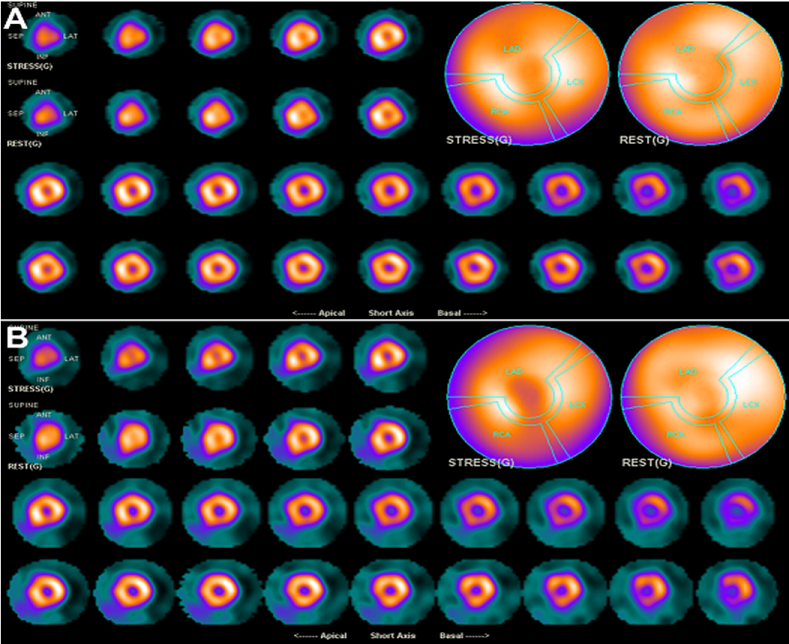 Figure 4: Shortly after successful revascularization of the LAD lesion, the patient’s chest discomforts disappeared quickly. (A) Follow-up MPI was performed 5 months after PCI for checking residual ischemia from the CTO lesion of RCA [9-11]. Surprisingly, it showed near-total resolution of ischemia in not only the LAD but also RCA territories, with minimally residual ischemia in basal inferior and basal inferoseptal segments (about 2% ischemic myocardium). The resolution of ischemia in RCA territory after successful revascularization of LAD lesion was considered related to well-development of collateral blood supply from LAD to RCA. (B) A second follow-up MPI performed 2 years after PCI revealed very similar picture as 1st follow-up MPI and the patient remains satisfied with the control of angina symptom. The presented case reminded us again that MPI provided the information regarding physiological significance of coronary lesions in patients with CAD and was very useful in the treatment planning of multi-vessel CAD for obtaining a favorable outcome.