Sacral chordomas pose a difficult challenge for physicians due to the close proximity of neural, vascular, and visceral structures. Patients and physicians must weigh the risks and benefits of operative versus non operative management when deciding on treatment of these lesions. We report a complication of single dose intent to treat SBRT for a sacral chordoma that should serve to remind oncologists that radiation therapy, like surgery, is not without serious potential complications and that surgical resection may still be the best option for patients whose tumor can be treated with en bloc resection.

approach including orthopedic/neurosurgeons, medical and radiation oncologists. As new treatment modalities emerge the treatment strategy for spine tumor continues to evolve. Chordomas and chondrosarcoma constitute the majority of malignant sacral tumors in adulthood. Histologically, these tumors are low to intermediate grade, however, they are locally invasive and have a high propensity to recur following surgery. They often present with advanced local disease, making them challenging to treat. When possible, en bloc surgical resection has been the recommended treatment for these tumors. Current literature clearly demonstrates that wide en bloc resection with negative surgical margins is the single most important predictor of tumor recurrence and long term survival [1, 2].

Unfortunately, the proximity of these tumors to neural, vascular, and visceral structures creates significant challenges to achieving the desired level of resection. Most of these tumors have an insidious onset and can be quite large at presentation. Advances in radiation oncology, specifically stereotactic body radiation (SBRT), which allows delivery of high dose radiation to the tumor while limiting exposure to normal adjacent structures, has recently led some oncologists to use this as definitive treatment for certain tumors. In addition to eliminating operative morbidity, SBRT offers a treatment option that spares neural structures that control important functions (i.e. bowel, bladder, sexual, extremity). SBRT is not without significant risks and associated morbidities. In this report we present a case of a gentleman with a sacral chordoma who was offered en bloc resection but elected to proceed with SBRT. We report a complication of single dose intent to treat SBRT for a sacral chordoma that should serve to remind oncologists that radiation therapy, like surgery, is not without serious potential complications and that surgical resection may still be the best option for patients whose tumor can be treated with en bloc resection.

The patient is a 77-year-old male who five years ago had been treated for a sacral chordoma with SBRT presented to the ED with lumbosacral pain. The original tumor involved the S1, S2 segments as well as the ilium adjacent to the right sacroiliac joint. He also reported bilateral lower extremity weakness. He denied paresthesia, fevers, or chills. The patient previously ambulated with a cane, but now required a walker and wheelchair. The patient’s medical history is significant for diabetes, coronary artery disease, hypertension, and gout. At the time of diagnosis, the patient was offered en bloc resection; however, he declined surgical treatment due to his desire to avoid nerve sacrificing surgery and a difficult sacral reconstruction. He was treated with single fraction SBRT. Following radiosurgery, the patient experienced significant skin breakdown over the sacrum as well as osteomyelitis which took two years to manage with antibiotics, multiple wound debridements and soft tissue coverage procedures.

On exam, he had well healed flaps over the sacral area (Figure 1) with no warmth, erythema, or fluctuance. He was tender at the left sacroiliac joint. There was a positive Patrick’s test on the left. Neurologic evaluation of the lower extremities revealed 5/5 motor strength in all muscle groups. He had diminished sensation in both legs due to diabetic neuropathy. He was able to stand with great difficulty and could not ambulate without severe pain. Diagnostic imaging revealed extensive osseous erosion involving bilateral sacroiliac joints and left sacroiliac joint septic arthritis (Figure 2). He had been previously treated with several 6 week courses of IV antibiotics. Due to the patient's worsening pain and decreased ambulatory status, he was indicated for sacroiliac joint debridement and fusion. We performed a dual approach involving initial anterior left SI joint debridement/ fusion followed by posterior lumbopelvic fixation (Figure 3). Post-operatively, the patient received a 6 week course of IV vancomycin. Initially, he demonstrated significant improvement in his pain and mobility. At six months post-op the patient noted increasing pain and deteriorating bowel and bladder function. Over time his functional status continued to decline; however, he remains alive 7 years after his diagnosis. Surgical pathology did not show any evidence of recurrent chordoma or new malignancy. The biopsy was consistent with radiation induced osteonecrosis. CT scan 14 month post op shows the hardware to be intact with pseudoarthrosis of the left SI joint (Figure 4). 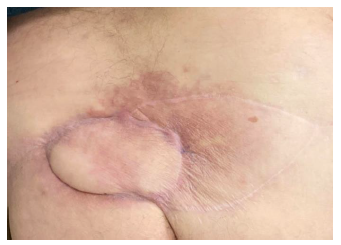 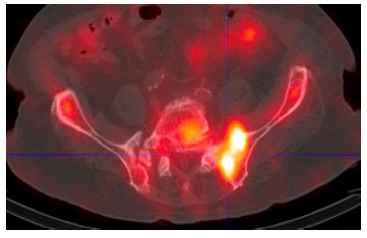 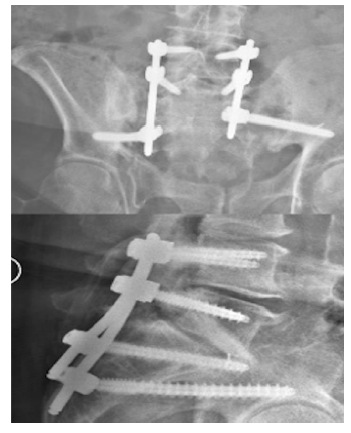 Chordomas are rare slow-growing malignant tumors compromising 1-4 % of all primary bone tumors [3]. They arise from the remnants of the notochord and present in the 5th-7th decade of life, occurring three times more often in men than women [4]. Population-based studies suggest an incidence of chordoma of 0·08 per 100 000, with predominance in men and peak incidence between 50–60 years of age. There is a very low incidence in patients younger than 40 years, and rarely in children and adolescents (<5% of all chordoma cases) [5]. Histologically considered to be a low-grade neoplasm, they often recur and rarely metastasize. Chordomas were believed to most commonly occur in the sacrum; however, recent evidence suggests an almost equal distribution in the skull base (32%), mobile spine (32·8%), and sacrum (29·2%) [6]. Chordomas are typically not sensitive to chemotherapy or external beam radiation, and therefore surgical resection has been the primary form of treatment.

The most important factor for disease-free survival is achieving an en bloc resection with negative margins. Their proximity to the spinal cord, cauda equina, bowel and other vital structures can make en bloc resection difficult to achieve. Confounding management is that often these tumors have grown considerably before diagnosis and so can be quite large on presentation. While sacral chordomas that are from S3-S5 can be resected through a posterior only approach, the presence of anterior soft tissue mass that extends as high as S1, S2 will require a more extensive resection and reconstruction. In tumors that involve the proximal sacrum en bloc resection requires resection of sacral roots, which sacrifice bowel, bladder, and sexual function. Because of that risk, SBRT would appear to be an attractive option of managing these tumors, however SBRT is not without significant risks and associated morbidities. Our patient was initially offered surgical resection; however, he opted for SBRT as primary treatment and had a prolonged and difficult disease course. He developed bone and soft tissue necrosis requiring multiple surgical procedures and chronic suppressive antibiotics to achieve soft tissue coverage. His course was further complicated by osteonecrosis of sacrum followed by sacroiliac septic arthritis/ osteomyelitis. His quality of life was significantly affected.

The incidence of sacroiliac septic arthritis is rare, ranging from 1-2% [7, 8]. The diagnosis is often delayed, with 75% of cases presenting with vague symptoms [9]. MRI and CT can demonstrate fluid in the SI joint and bony involvement, but are often not obtained in the acute setting [10, 11]. While surgical resection has been considered the mainstay of treatment for sacral chordoma, surgery alone has been associated with suboptimal local control when en bloc resection is not achieved. A 43% local recurrence at median 6 year follow up was found in a meta-analysis of published sacral chordoma series from 1980-2016 that included 1235 patients (80% R 0/1 resections and 37% RT adjuvant) [12]. Surgery, especially for high sacral tumors has also been associated with significant morbidity. Memorial Sloan Kettering published a series of 42 sacral chordoma patients undergoing surgery (89% R0/1 resection and 12 % adjuvant radiation) with reported complication including 74% self-catheterization, 67% sexual dysfunction, and 29% permanent colostomy [13]. Advances in radiation oncology have dramatically affected the management of spinal tumors. Conventional doses of external beam radiation therapy are constrained by spinal cord and cauda equina tolerance, usually at 45 Gy and 60 Gy respectively [14].

Radiation effects on the skeleton range from osteopenia to necrosis and vary based on the location, dose and fractionation of the beam. The effects of high dose radiation on adjacent soft tissues are also significant in the development of osteoradionecrosis [16]. Radiotherapy causes a hypo vascular, hypoxic and hypocellular environment in which the basic metabolic demands for cellular survival cannot be met. Under these conditions bone becomes devitalized and adjacent soft tissues break down. Exposure of bone to radiation primarily damages osteoblasts, resulting in reduced production of bone matrix [17]. This, in turn, leads to osteopenia due to unopposed osteoclast function making the bone prone to fractures [18]. Osteoradionecrosis is most commonly described in the head and neck literature after treatment of head and neck cancer with reports suggesting that it affects the mandible and maxilla in up to 22% and 11% of patients, respectively [19]. Osteoradionecrosis of the spine is a well recognized complication of SBRT. Memorial sloan Kettering was the first institution to report on SBRT induced vertebral compression fracture (VCF) with VCF in 27(39%) of 71 sites treated with SBRT and the median reported time was 25 months post treatment [20]. In their reports MD Anderson Cancer Center (MDACC) and University of Toronto (UofT) suggested that the risk may be closer to 11% to 20%, with a median time to VCF of 2 to 3 months [21, 22].

Our patient developed osteonecrosis from SBRT affecting the sacrum which led to osteomyelitis and sacroiliac septic arthritis. The RTOG is a widely used grading scheme to describe the complications of radiation therapy. The grading scheme varies from 0 (no symptoms) to 5 (death), which directly relates to radiation dose [23]. Our patient experienced grade 4 radiation toxicity involving skin (ulceration), subcutaneous (necrosis), bone (necrosis/ spontaneous fracture) and joint (necrosis). The typical single fraction SRBT dose for a chordomas is 16 Gy [24]. Toxicity can be seen with doses as low as 9.2 Gy, with risks of radiation myelopathy beginning at 12.4 Gy [25, 26]. There is no well-defined dose at which skin and subcutaneous tissue toxicity begins, but skin toxicity has been reported with single doses of 15 Gy [27]. Our case illustrates the significant morbidity that can occur with intent to treat SBRT for a sacral chordoma. Patients should be aware of these potential complications of SBRT when deciding between surgery and radiation as the primary treatment of sacral chordoma.